The winning design for North Queensland Stadium by Cox Architecture and 9Point9 Architects, to be built in Townsville.

Townsville is the first city to sign a City Deal as part of the Commonwealth Government’s Smart Cities Plan. The plan will capitalise on opportunities for CBD development and urban renewal, water security and supply, defence, education, roads and digital connectivity.

To find out more about the Townsville City Deal and the Implementation Plan, Queensland Planner spoke with Townsville Mayor, Cr Jenny Hill, who sees the City Deal as a game changer for the city.

How did you get the opportunity to negotiate a City Deal for Townsville?

The opportunity came as part of an election commitment from the LNP and Ewen Jones - the then Federal Member for Herbert. It was an opportunity to take a policy initiative that worked well in parts of England (Manchester) to realign cities that had depended on old style manufacturing and transition them to the new economy. After the demise of QNI (Queensland Nickel) this seemed like a sound policy initiative and was supported by council.

What are the benefits of the City Deal for Townsville?

To transition an economy requires long-term planning and a commitment from all levels of government to support the changes. In England there are just two levels of government, in Australia we have three so through a Memorandum of Understanding (MOU) with the state, the federal government has tied the state to the City Deal. With that there was a signing in Canberra of the key elements for the Townsville City Deal.

What will the Townsville City Deal deliver for Townsville and the community?

A focus by government to deliver a number of key drivers such as water and energy (in an affordable way to the community), red tape reduction, support for improving major facilities like the port, allowing growth and increased capacity and provision of priority developments, urban renewal and industrial growth that is managed in a similar way to the Southbank Corporation.

City Deals are aimed at ensuring all three levels of government work together collaboratively to deliver outcomes for Townsville and the community. How does the City Deals do this?

The implementation plan commits all levels of government to various actions and sets milestone dates.

Can you tell us about the City Deal Implementation Plan?

The plan sets out a clear path for Townsville’s future prosperity and I thank our local stakeholders who are representing the community at the partnership forums to keep the City Deal firmly focused on what Townsville needs. These partnership forums will also help identify new opportunities and attract other investment to complement Townsville City Deal initiatives. The Implementation Plan includes milestones such as:

What are some of the major projects that will be implemented through the City Deal and which ones do you see as being the most important to be implemented as soon as possible and why?

A number of City Deal projects are already well advanced – a Managing Contractor has been announced for the North Queensland Stadium, the Townsville Water Security Taskforce is in place and the board of the Townsville-based Cooperative Research Centre for Developing Northern Australia has been announced. The stadium is about jobs and the revitalisation of the inner city, this will facilitate changes in the inner city. Water is an issue as we have had another poor wet season so the most affordable way to transport water to Townsville from the Burdekin needs to be determined with support from the Federal and State Government.

The City Deal has committed to the development of the North Queensland Stadium and Townsville entertainment and convention centre. When will these be built?

The managing contractor for the Townsville Stadium has been announced, and we are progressing the feasibility study for the Entertainment Convention Centre, which that should be complete by third quarter 2017. The North Queensland Stadium design also allows for integration with an Entertainment and Convention Centre so considerations for this additional facility is already being planned for.

The City Deal has committed to the development of better public transport solutions for Townsville. What are some of the solutions being targeted by all levels of government?

The bus hub in the CBD is an important first step to develop safe and convenient infrastructure to try and encourage the use of public transport. The State funds public transport in the city, but as a council we have worked closely with the government to ensure the bus hub in the inner-city is located where it can serve the community best and support our broader efforts to reactivate areas and bring life back into the CBD.

How will the City Deal help to activate the Townsville City Centre?

There is no doubt that the Adelaide Stadium was a catalyst to the revitalisation of Adelaide CBD. The City Deals present us with an opportunity to use funding from state and federal to move forward with major infrastructure projects that can help focus development in the CBD by creating a lifestyle that is typically enjoyed in CBD’s of capital cities.

Townsville is currently on level 3 water restrictions due to the drought. The Ross River Dam is only 22% full. The City Deals has made a commitment to water security and supply in Townsville. What is the City Deals doing to find a permanent solution?

Members of Townsville’s intergovernmental Water Taskforce met for the first time earlier this month, officially kick starting investigations into solutions for the city’s water security. An expert advisory panel has been appointed to assist the Taskforce with its investigations of infrastructure options, as well as water demand strategies including water efficiency programs and water saving technologies. Part of the Townsville City Deals agreement, the Townsville Water Taskforce was set up by the Australian and Queensland governments in partnership with the Townsville City Council.

This article was originally published in Queensland Planner, Volume 57 No. 2 (Winter 2017). 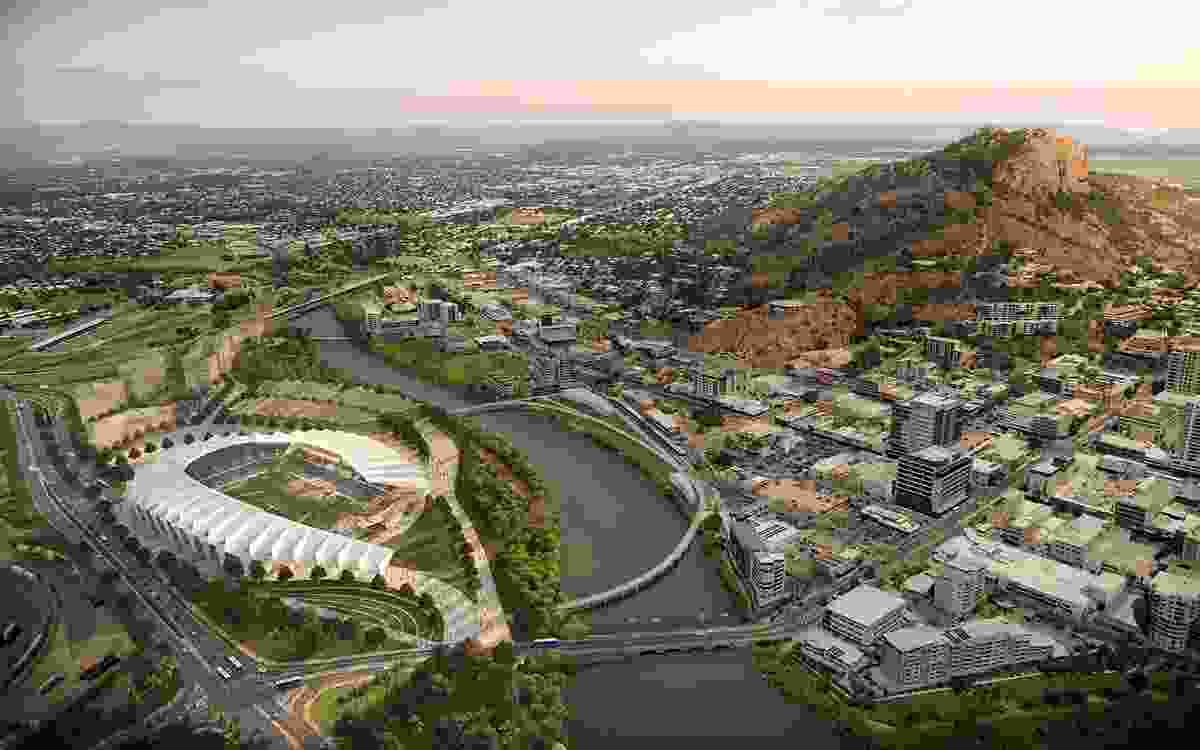 The winning design for North Queensland Stadium by Cox Architecture and 9Point9 Architects, to be built in Townsville.