The landscape architecture team at Tract Consultants has created a contemporary pared-back garden in the inner-Melbourne suburb of Carlton that elides the distinction between gallery space and domestic living.

A crisp plane of paving is positioned within a square of four plane trees.

“It’s like the James Bond house – everything moves,” says the owner of Zinc House, as he presses a button to raise the thick, vault-like door onto his north-facing rear garden. Virtually every wall reveals flat-screen televisions, conceals gadget panels or hides rooms. Clad inside and out in zinc, the modernist fortress is a machine for living. But given its dual role as gallery space, perhaps Zinc House is more akin to a kinetic sculpture. Indeed, the only brief given to both the architects, Denton Corker Marshall (DCM), and the landscape architects, Tract Consultants, was to “create a piece of art.”

“A brief doesn’t get any better than that,” says Tract Consultants founder Steve Calhoun. Yet he concedes that only trust and a shared aesthetic language could permit such an open brief. Calhoun, DCM and the clients have known each other for thirty years and favour a pared-back palette. Still, it takes a certain professional openness to surprise and the thrill of seeing what artists deliver to allow carte blanche to be given.

“It’s not my business to dictate the brief [to DCM and Tract Consultants],” the client says adamantly. “They’re not experts, they’re maestros.” That faith was vindicated when the house received an Australian Institute of Architects National Award for Residential Architecture in 2011.

The brief may have been simple, but the site wasn’t. Situated in Melbourne’s inner-city suburb of Carlton, the block is roughly triangulated by uneven backyards and laneways. Brick walls of varying height, texture and colour surrounded the perimeter.

“When I first did the plan, [DCM co-director] Barrie Marshall said, ‘I never saw the geometry before.’ Because it was all mixed up out here,” Calhoun recalls. “But it was all there. It was so defined by those walls.”

So how did arch-modernist DCM, renowned for its saluting roofs, sticks and blades, not see the geometry?

Calhoun created a landscape that extends the clean modernist planes and layers of the building. To define the vertical geometry of the garden, the brick walls were raised to the same height. Upon this blank canvas a layer of creeping ivy unifies the surface. On the horizontal axis a series of rectilinear fields fan out and down the right-hand side of the building like a deck of cards. A field of gravel unifies the horizontal plane.

“My role model in all of that was minimal artist Donald Judd,” says Calhoun, who belongs to the Judd Foundation in Marfa, Texas. “I really like the simplicity and rigorous geometry of his work. That has had a big influence on this particular project because of the defined spaces and the geometry. It’s very much in keeping with the basic modernism that I aspire to.”

Harvard-educated, Calhoun continues the tradition of modernist landscape architects Dan Kiley and Peter Walker, with whom he had his first job. “One of my primary instincts is to really boil it down to the essence and make it strong and powerful,” Calhoun says.

“To me the perfect garden is a series of rooms. It’s always defined – generally speaking – by a large space with a series of rooms to give it intimacy and interest. I just view it as an extension of the house. Going from one space that’s defined internally to another defined space outside.”

Immediately to the rear of the kitchen and living areas is a lawn below a large projection wall. A pergola-covered barbecue area and giant palm tree are featured to the right of the house. Between the two spaces is the main “room,” created by a square of four plane trees that eventually will join to provide a complete leafy canopy. Beneath the trees a crisp platform of paving floats only a few centimetres above the field of gravel. That platform is a “very Judd move,” Calhoun says. In the room’s centre a fire pit acts as an outdoor hearth. Like the concealed compartments in the house, a square sheet of metal can also hide the fire pit and streamline the platform.

Just as Zinc House’s interior elides the distinctions between gallery and domestic living, the surrounding grounds blur the typical nature of backyard, with domestic “rooms” and artworks scattered throughout. This highly crafted modernist design is – inside and out – both artwork and gallery. 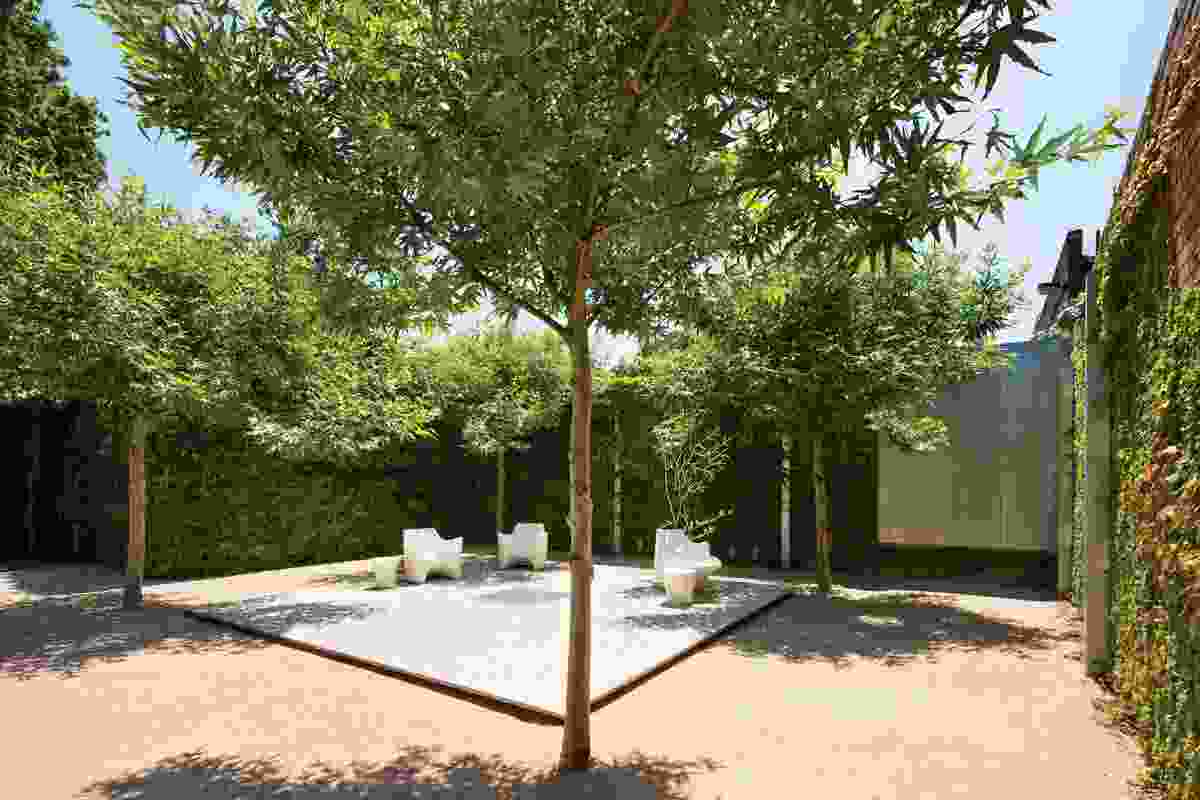 A crisp plane of paving is positioned within a square of four plane trees. 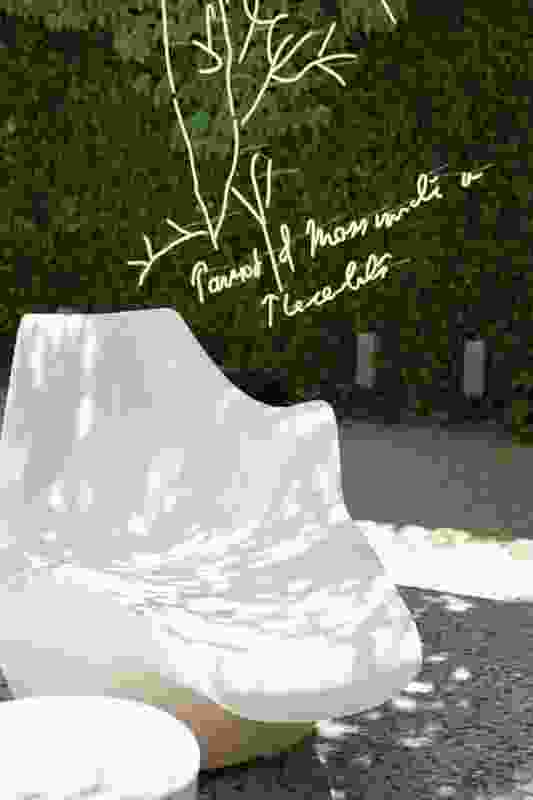 A sculptural outdoor chair augments the intricate shadows of the young trees above. 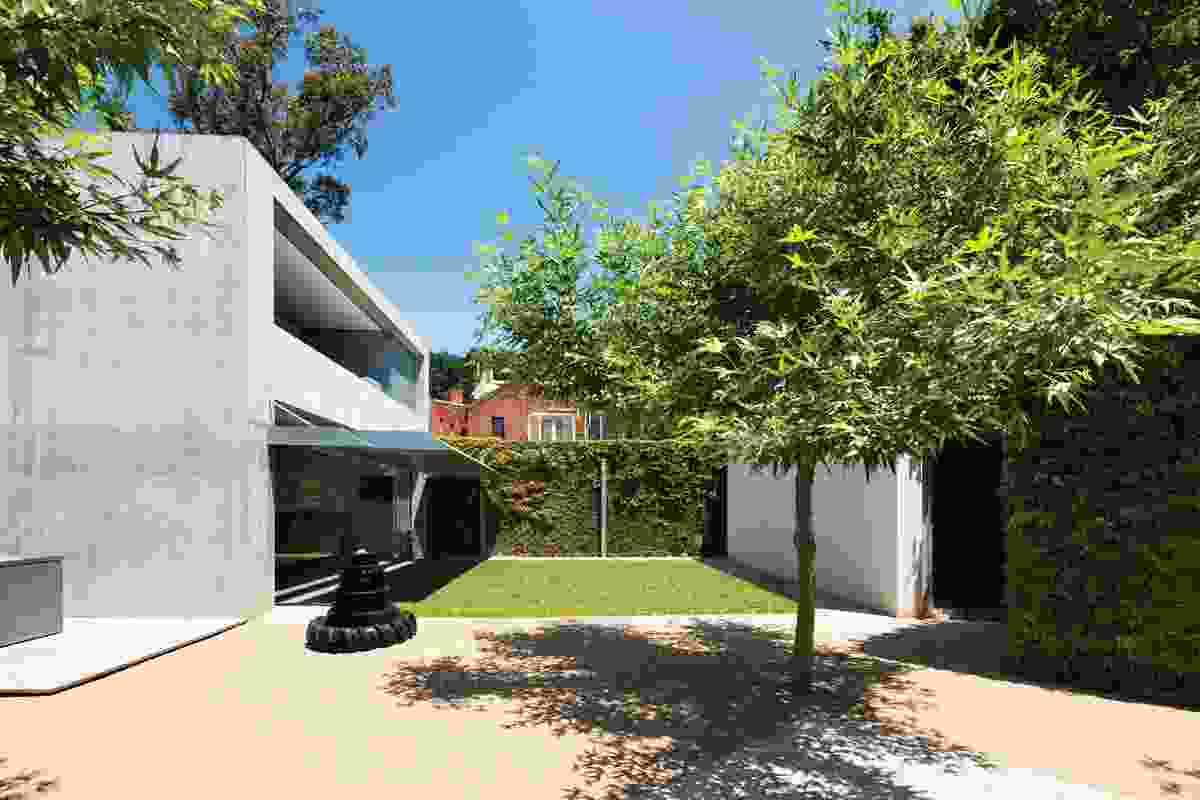 Artworks are scattered throughout the garden. 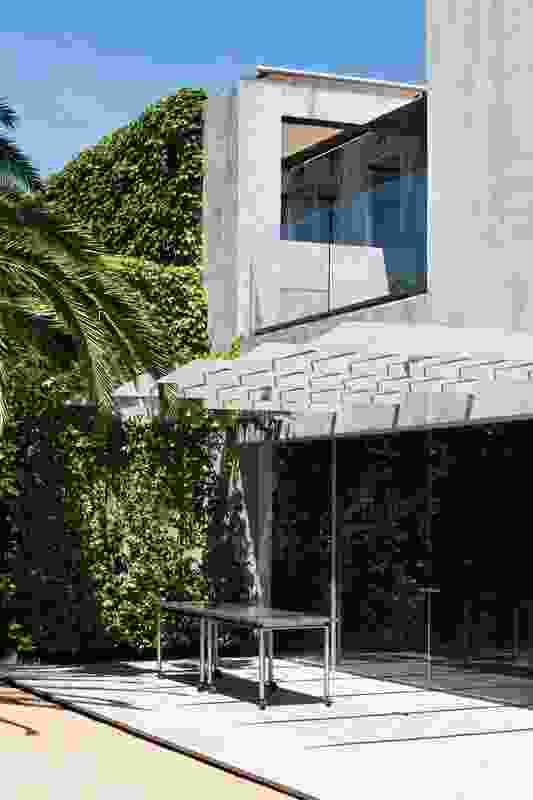 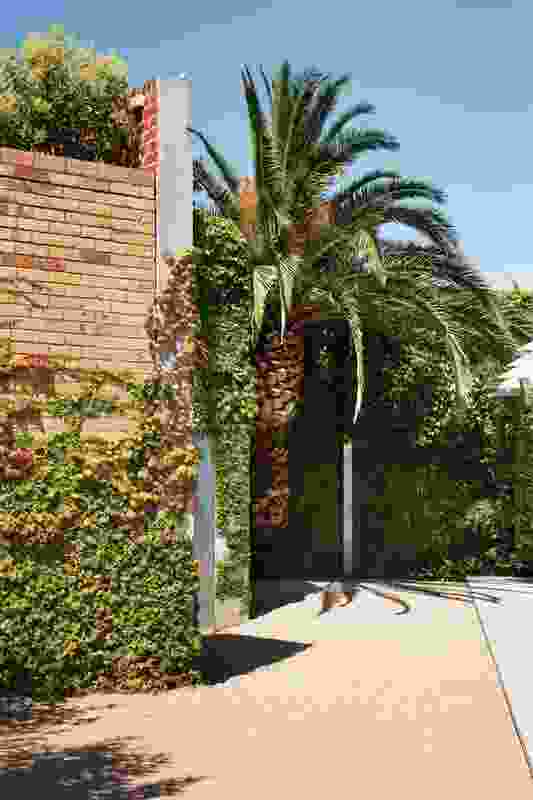 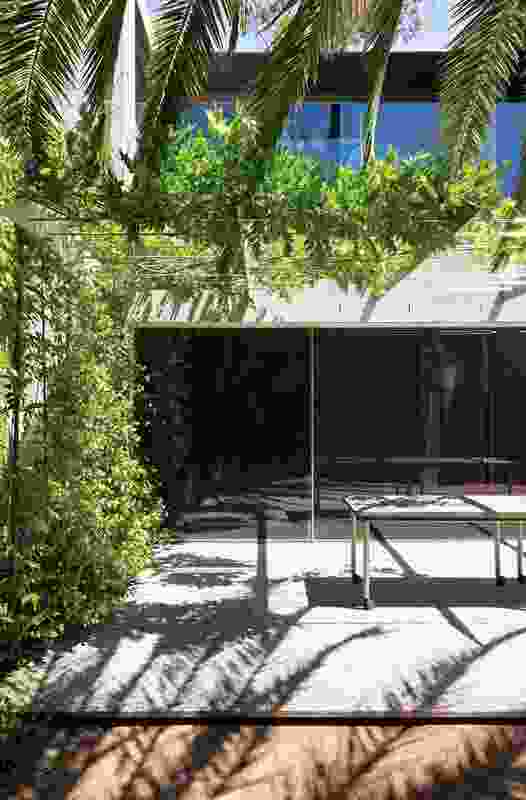