Doubleground by Muir and Openwork.

The National Gallery of Victoria has unveiled its 2018 Architecture Commission designed by Muir and Openwork.

The installation, titled Doubleground, consists of a number of raised landscapes and zig-zagging walls through the NGV’s Grollo Equiset Garden.

The project is an architectural realization of a digital collage, which architect Amy Muir and landscape architect Mark Jacques of Openwork created to express memories and recollection of the building.

“We don’t remember architecture through plan and elevation, we only remember it through perspective,” said Muir.

Jacques added, “Those collages [were made with] large Wolfgang Sievers photographs of the gallery when it first opened. They are fragments of views – a remembered version of architecture that’s then transcribed into the garden and experience again through perspective.”

A series of walls made from painted marine ply and landscaped berms are installed throughout the garden, which create space designed to “curate the original conditions of the garden,” Muir said.

The walls form a pattern which references the geometry of the Roy Grounds-designed building, in particular the triangular forms of the facades and the Great Hall.

From the perspective on the ground, the installation defines a series passages and rooms throughout the garden. But from the perspective atop the raised landscape, the walls act as balustrades on a hill, which gives visitors a view downward into a canyon-like space.

“The idea of incline is to make an amphitheatre to house a band or a movie screen at the rear of the garden,” Jacques said. “All of a sudden the magnolias and the trees at the back become the proscenium rather than an edge.”

Made from timber trusses and polystyrene foam, the structure is light weight, self-supporting and free of footings. “Our intervention was about using the landscape as a ballast,” said Muir.

The installation also creates a decked area defined by bricks used as pavers, which reference Grounds’s original timber design for the gallery foyer. The deck was originally proposed as timber, however, “the reason that it went to brick is because it’s simply less excavation – the deck with bearers would mean more digging. It would have been more of an intrusion into the garden,” Jacques said.

Elsewhere in the garden, an inclined bed planted with a dozen species of gold, yellow and orange flowers recalls Muir’s childhood memories of rolling around the formerly golden carpet of the Great Hall, prior to the Mario Bellini and Metier 3-designed redevelopment in 2003. The flowers have been selected to bloom at different time throughout the summer.

Tony Ellwood, director of the NGV, said “2018 marks the fiftieth anniversary of the NGV International building and Doubleground is a concept that offers visitors a unique opportunity to reflect upon and reexamine the history and design of the Gallery as an integral part of Melbourne’s public realm.”

The 2018 NGV Architecture Commission is on display until April 2019.

Now in its fourth year, the Architecture Commission is the result of an annual design competition, which in 2018 attracted 73 entries.

The NGV has also launched the design competition for the 2019 Architecture Commission. 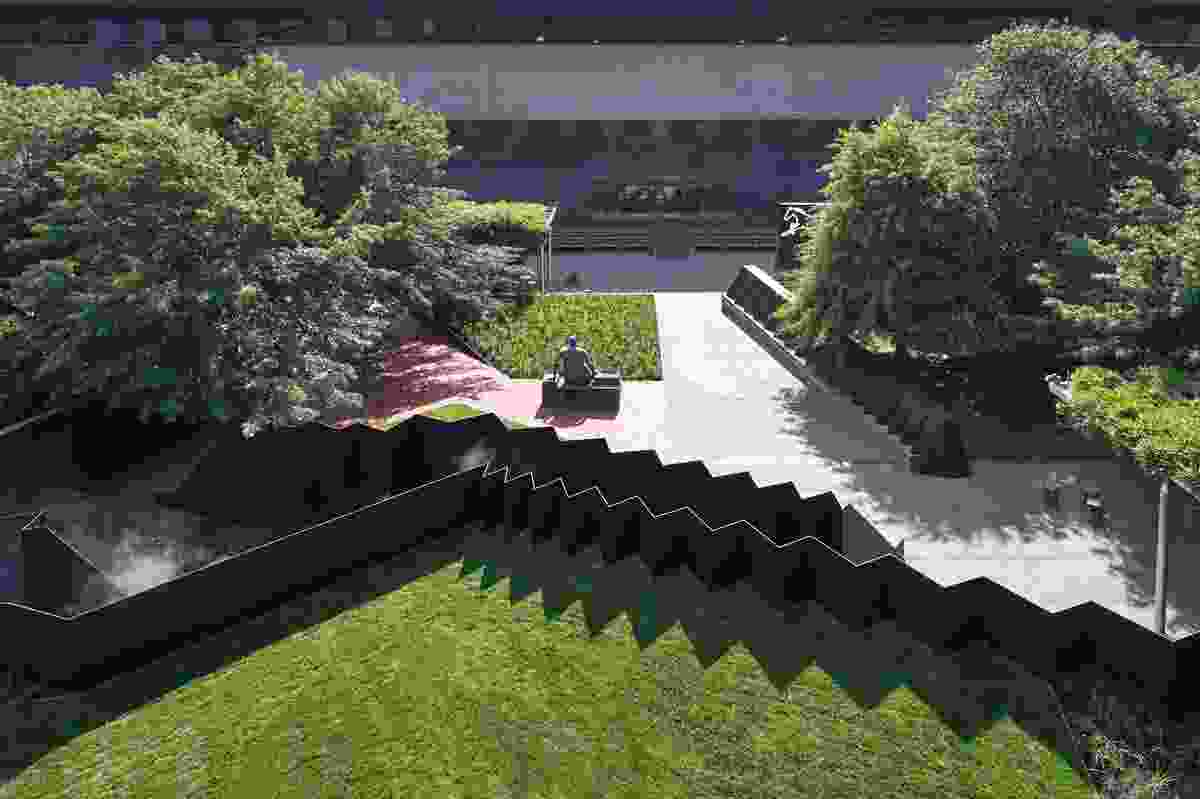 Doubleground by Muir and Openwork. 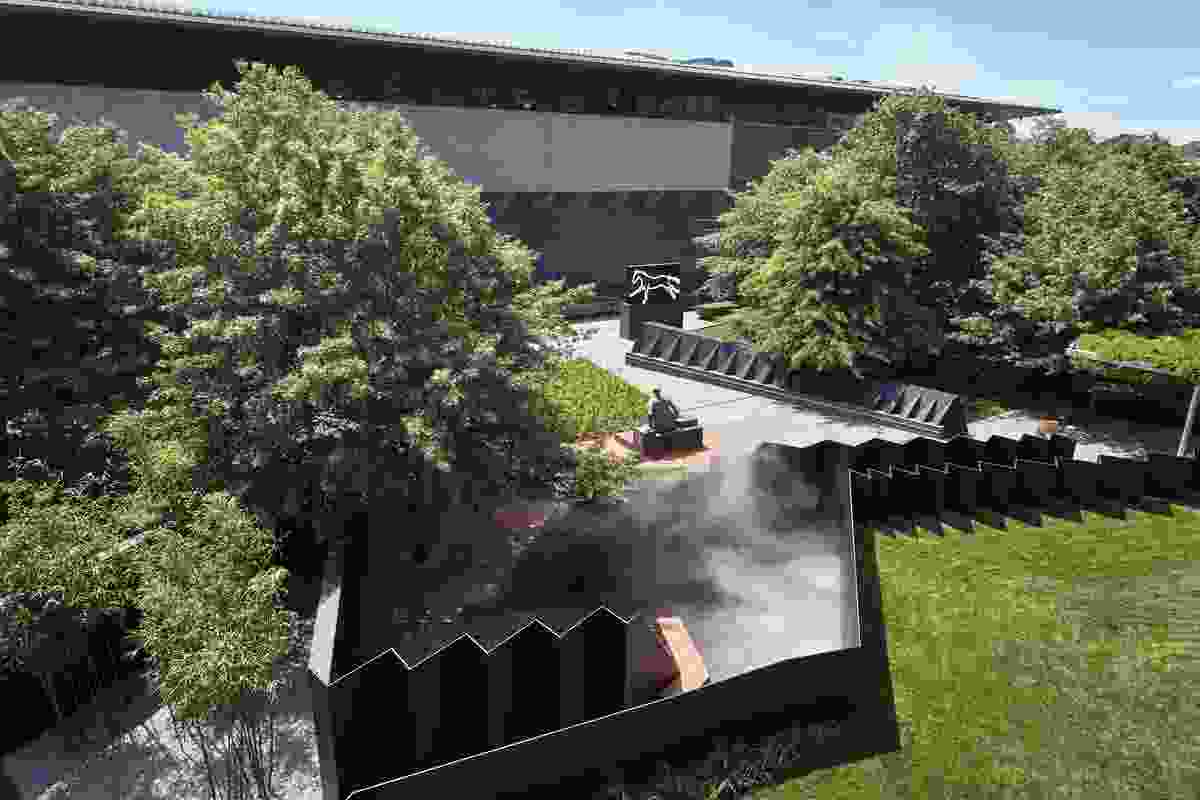 Doubleground by Muir and Openwork consists of a series of raised landscapes and zig zagging walls. 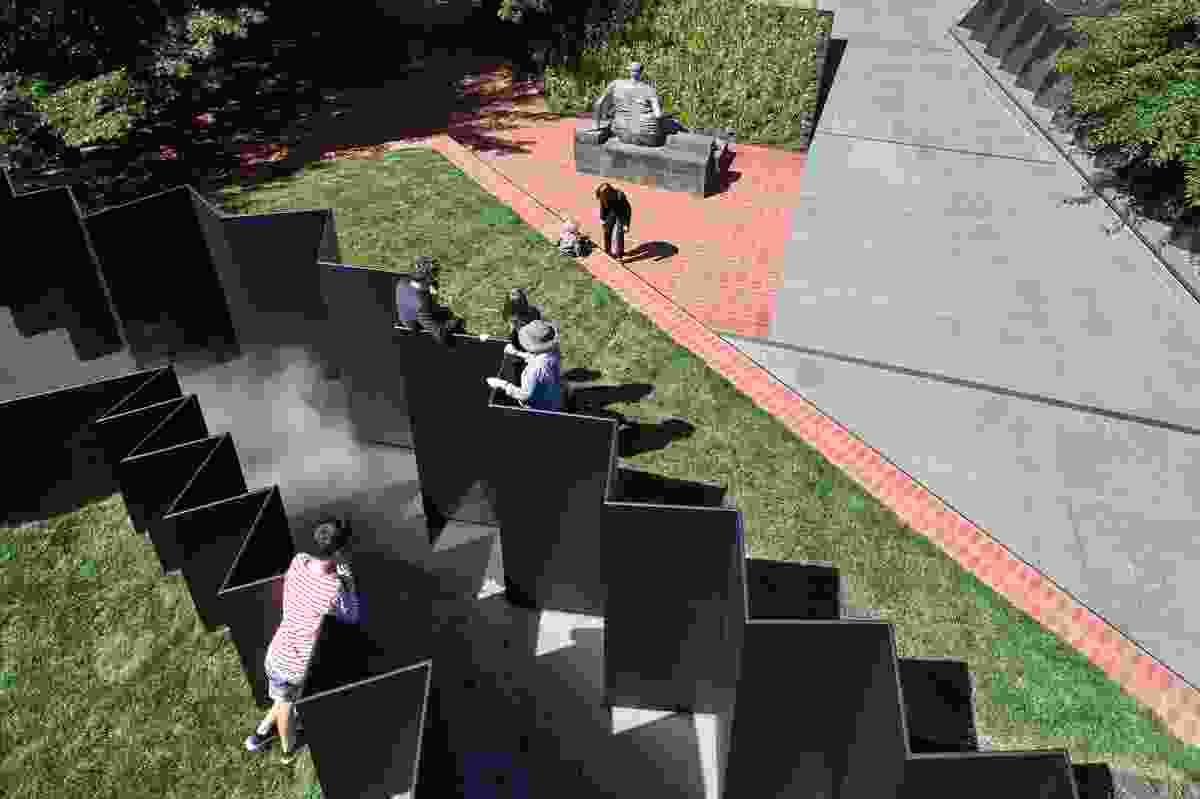 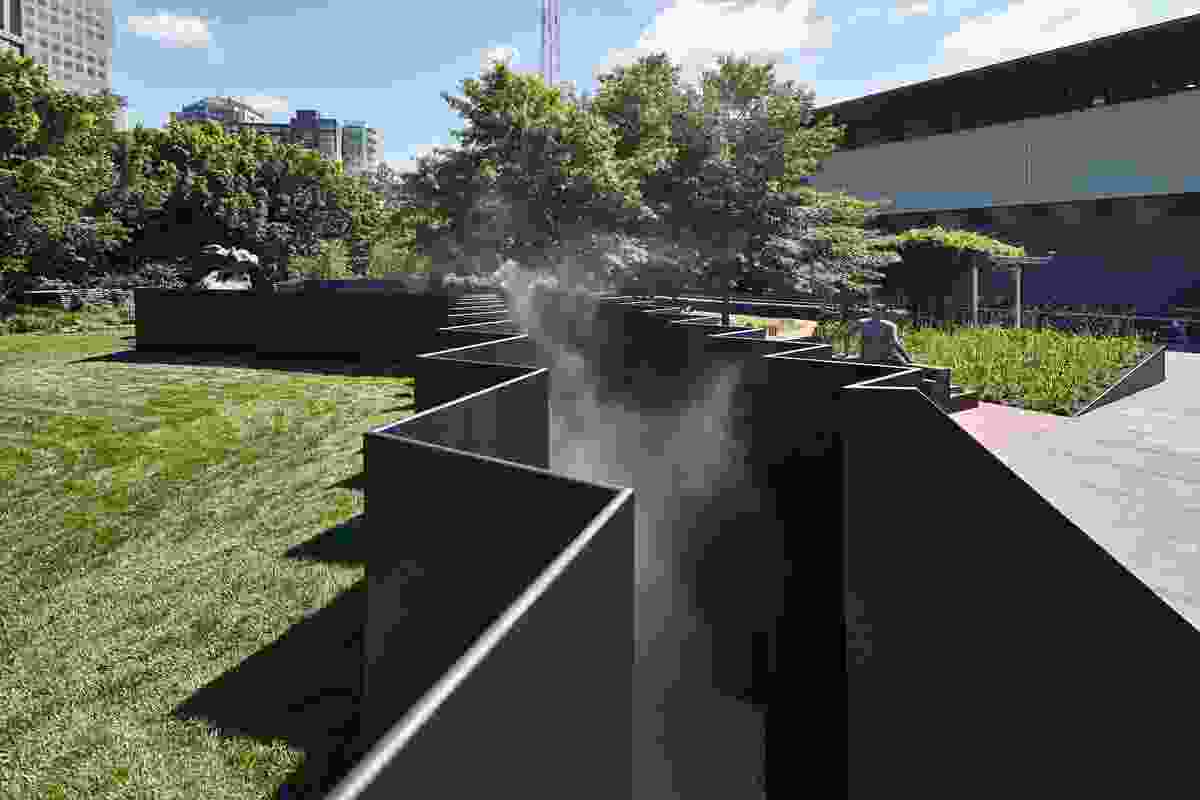 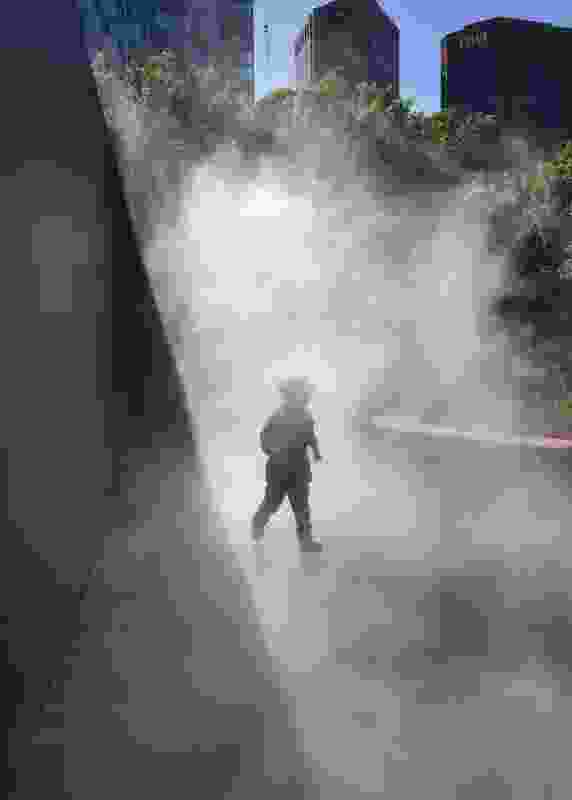 Aerial view of Doubleground by Muir and Openwork. 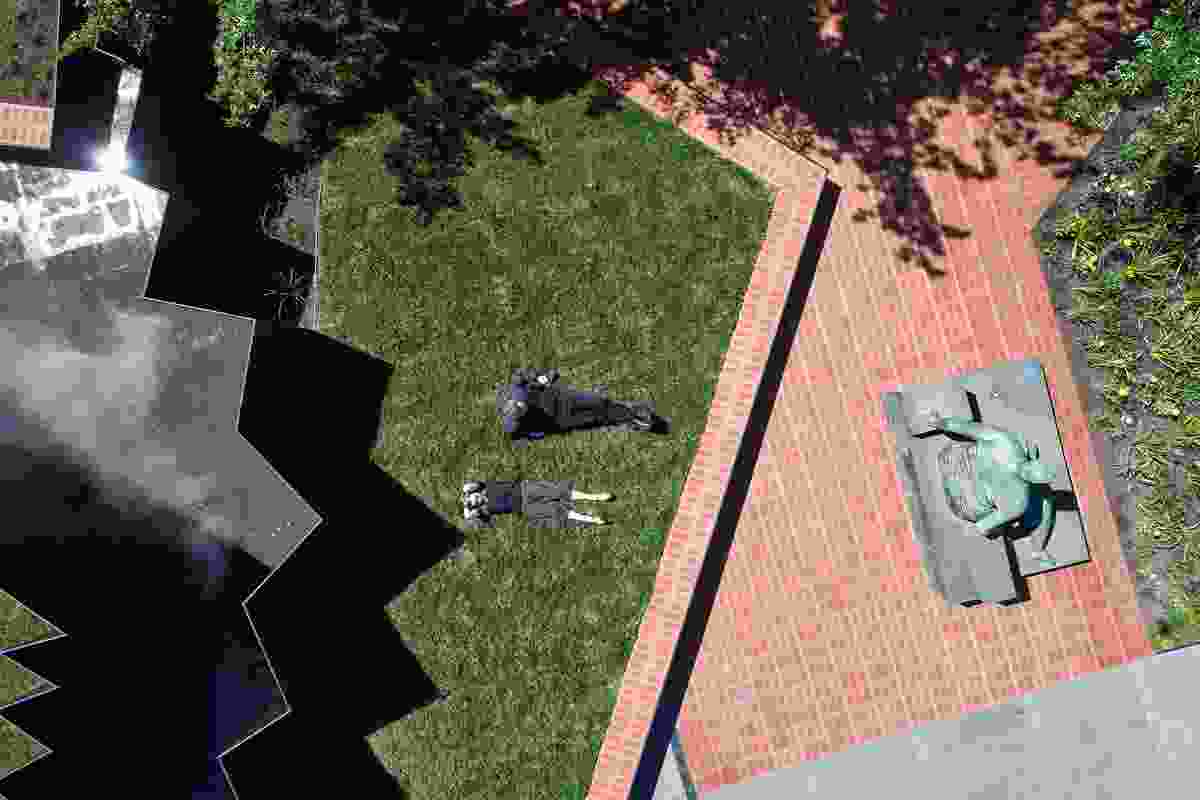 The landscaped berms of Doubleground by Muir and Openwork provide a place for visitors to rest. 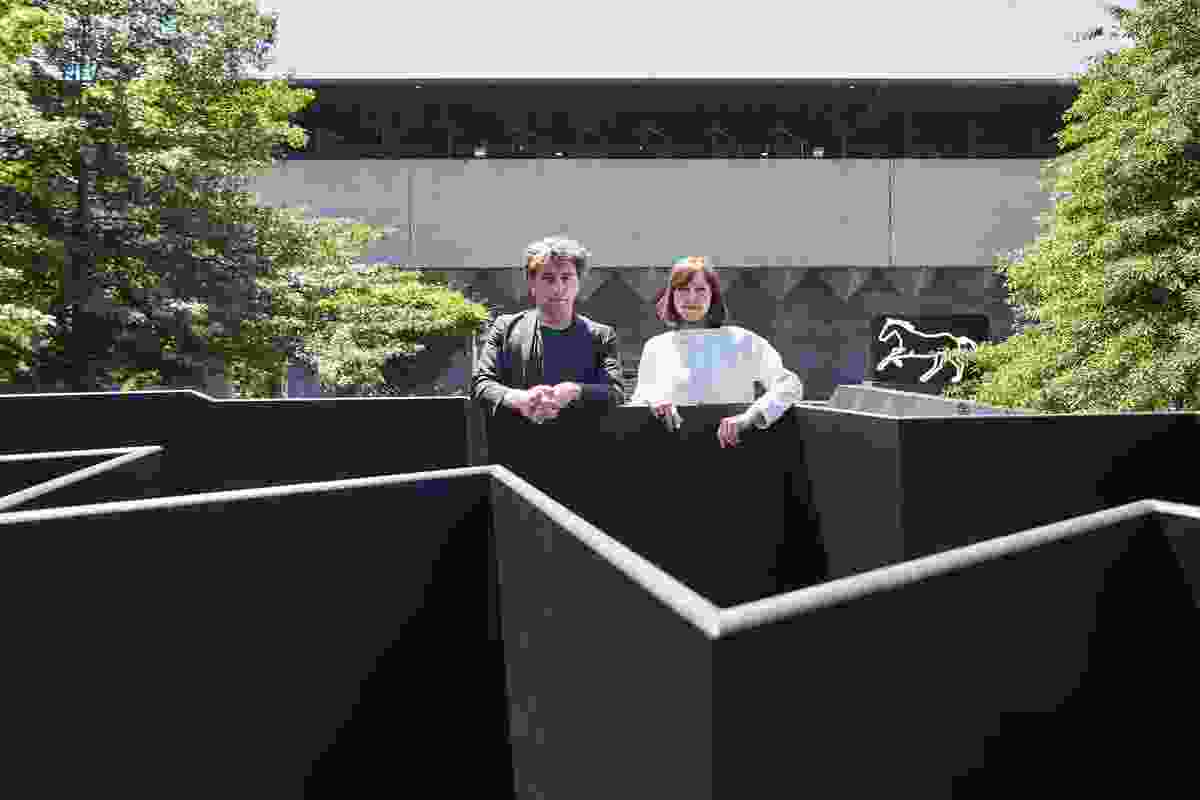