2019 was a year of protests. Demonstrations in France against pension reforms and in India against a citizenship bill are ongoing. Iran, Iraq, Chile, Colombia and Ecuador all saw riots in which people lost their lives. Russia saw the largest public protests against president Vladimir Putin’s stranglehold on power since 2013. In the most notable occurrence of the year, Hong Kong witnessed a lengthy outpouring of public dissent, with marches, on occasion, reaching up to a reported two million protesters. Closer to home (and around the world), the September climate strike mobilized millions, especially the young, in a global demand for greater action on climate change. In this context, it seems especially pertinent for Melbourne-based Kerb Journal to devote its twenty-seventh issue to questions of politics, public space and the questions: “Whose responsibility is it to make sure that public spaces are accessible to all, especially those who are marginalized? And what influence can and do designers have over these outcomes?” in the words of its editors, Benjamin Jameson, Emily Sinyavker, Gary Ward, Reuben Chan and Shanley Price.

The social agency of landscape architects is not a new topic. Indeed, it is entangled with the very origin story of landscape architecture. Frederick Law Olmsted famously wrote, upon encountering the public park at Birkenhead outside Liverpool in England, of his admiration that such a “magnificent pleasure-ground” should be “entirely, unreservedly and for ever the people’s own.” Birkenhead Park was, to Olmsted, an expression of democratic spirit materialized in space that was, in his immortal phrase, “a grand good thing.” Of course, the origin story of landscape architecture in Olmsted’s masterwork, New York’s Central Park, is not without its deeply inegalitarian erasures. The park’s literal erasure of Seneca Village, one of the earliest settlements of African-American property owners in New York City, parallels a perhaps more troubling cultural amnesia on the part of landscape architecture as a profession of the role of parks in various significant social displacements (from Central Park through to various “urban renewal” projects, commencing in the 1960s, through to the present day).

The editors and contributors to Kerb 27: Selective Perceptions – Who are we really designing for? seek to address (and redress) this situation by focusing on a diverse range of issues, each of which forms an integral part of the ongoing political mosaic of contestations over spatial, social and environmental justice. Danielle Toronyi of US-based practice Olin considers the effect of the design of the public realm on those with autism. Montreal-based architect Eloise Choquette celebrates the DIY queer spaces provided by the Caravan and Shim Sham Clubs in 1930s London. American landscape architect Walter Hood discusses his project for a monument to former US president Woodrow Wilson at New Jersey’s Princeton University that integrates critiques of Wilson’s problematic legacies. Urban ecologist Sarah Dooling examines the way in which green infrastructure and climate resilience projects can also result in “green gentrification.”

RMIT and Monash University academics respectively, Yazid Ninsalam and Michaela Prescott reflect on the giant artificial islands of Malaysia’s Forest City development in Johor, claimed by the project’s instigators to be literally built around the protection of the coastline’s fragile seagrass ecosystem. Ninsalam and Prescott’s article uncovers how the project, although ostensibly unrelated, is nevertheless deeply entangled with the vast environmental transformations being wrought across the globe by China’s massive Belt and Road trade and infrastructure initiative. Ed Kermode and Dan Parker, in an article accompanied with images of a giant gum tree, ghostly and rendered in a sanguineous purple in their 3D point cloud scan, speculate on how such representational techniques might shift perceptions of the non-human further towards the agency of French philosopher Bruno Latour’s “actants.” Melbourne-based landscape architect Bede Brennan and artist Minna Leunig continue in this vein with a broader survey of all the nonhuman actors that constitute our urban assemblages. Pittsburgh-based designer Paige Anderson, in a timely look backwards, recalls the 2014 Umbrella Movement in Hong Kong and its temporary (and ultimately frustrated) mobilization of “spatial power” in its calls for greater democracy in the territory. And in a particularly affecting, but powerfully laconic paragraph reflecting on two simple photographs, artist Wendy Scriven devastatingly undermines the aesthetics and ethics of the photography of periurban “wastelands” that began with the work of the New Topographics in the 1970s and continues to captivate designers today.

Other contributions give critical appraisals of “universal design,” disaster resilience design, surveillance as public space data collection, privately owned public spaces and other issues besides. What all contributions, as well as the editorial position, share is an unheroic and unsentimental awareness of the complexity and complications of designers’ roles in the production of overtly and covertly political space: positions that are not unproblematically “great” or “good,” are sometimes progressive, sometimes complicit, sometimes failures and occasionally qualified successes. This somewhat more contingent perspective distinguishes the editorial direction of Kerb 27 somewhat from other recent contributions to the field, such as UK academics Ed Wall and Tim Waterman’s edited collection Landscape and Agency (Routledge, 2018), which, while undoubtedly critical in a scholarly sense, still ultimately affirms “the capacity of landscape, as a complex of powerful social, spatial and ecological relations, to empower change.”

Towards the centre of the issue Swiss photographer Valentin Jeck’s stunning photographs of Yugoslavia’s iconic communist monuments feature, accompanied by an insightful essay by Melbourne-based architectural researcher Sofija Kaljević. The lyricism of Jeck’s images, as much as the decaying structures themselves, serve as a testament to the rise and fall of what cultural critic Fredric Jameson termed “Second World culture,” not in a pejorative sense, but rather in contradistinction to the “First World culture” of late capitalism. The photographs serve as a sobering reminder that designers and others have sought to spatialize and materialize utopia before – a reminder that, however, in no way delegitimizes ongoing struggles for improvement and reform in the movement towards a self-conscious, self-aware and appropriately sceptical not-quite-utopia. 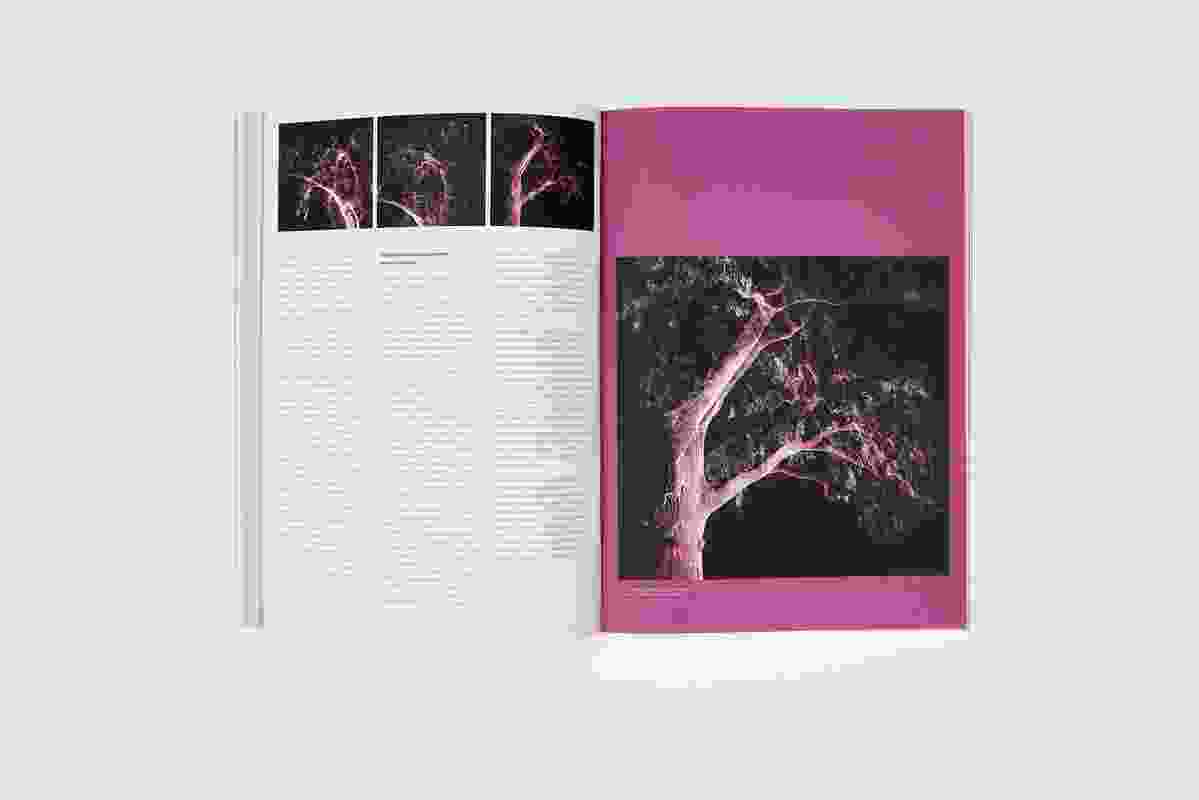 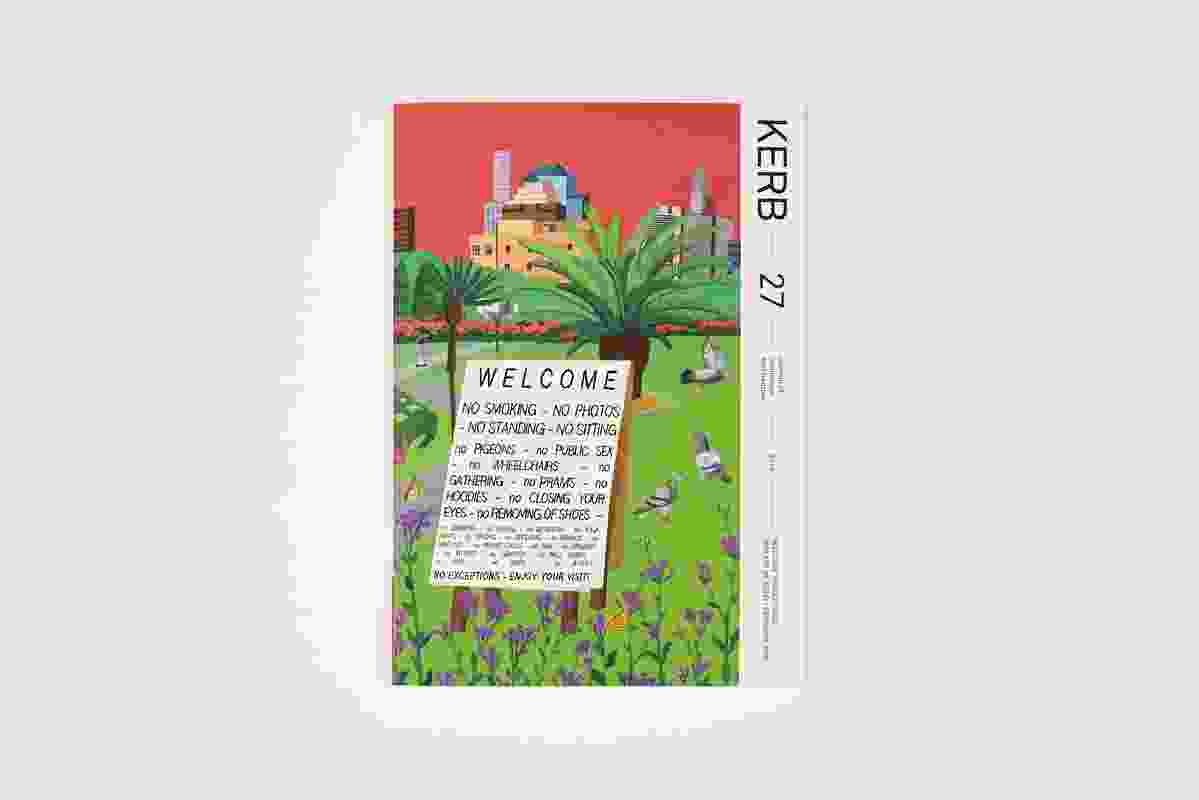 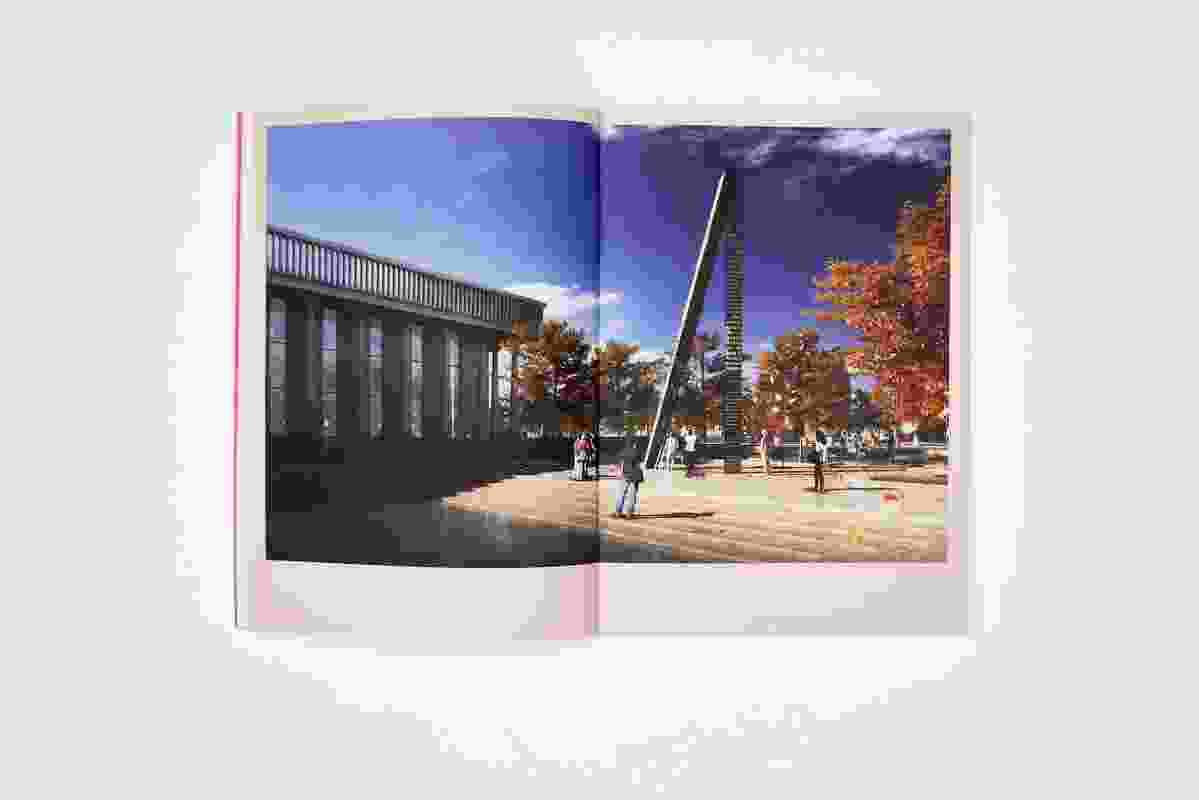 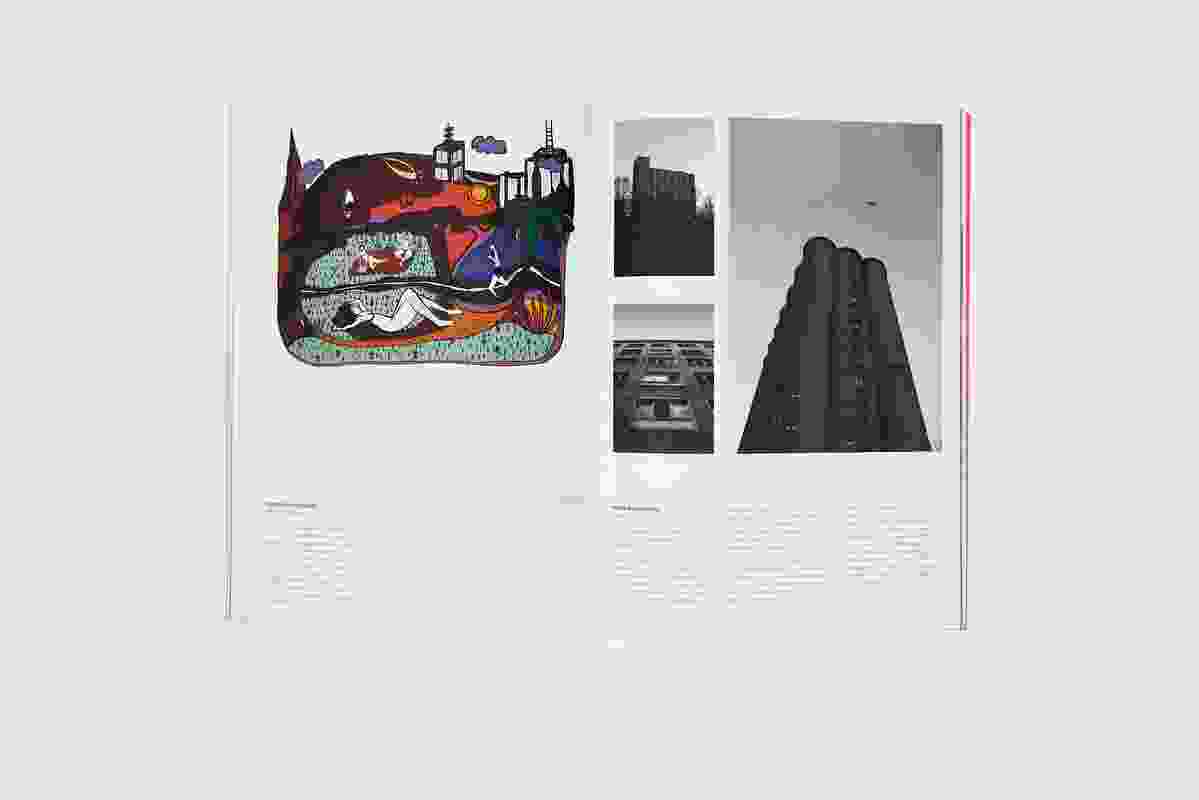 A spread from the pages of Kerb 27. 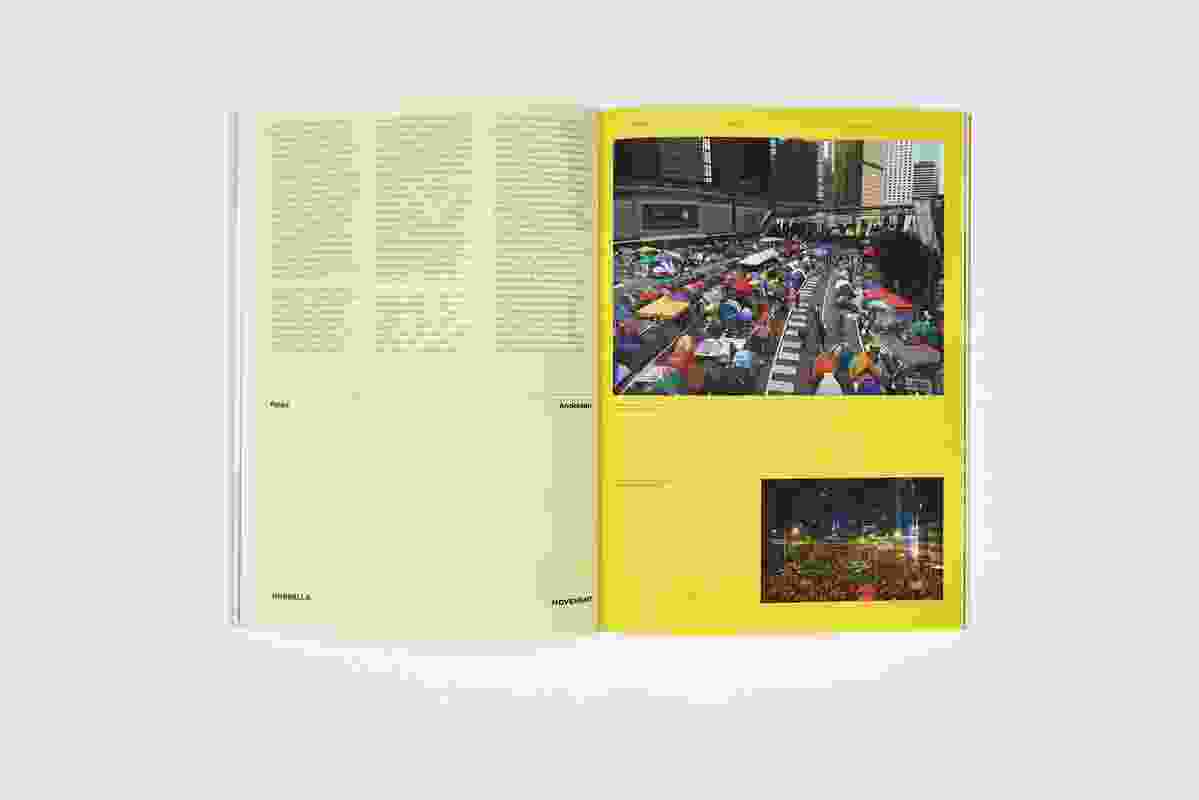