Horse Island: A garden of grandeur

Western view from the big house.

The far South Coast of New South Wales retains much of the simplicity of earlier times. Here rugged mountains and forests of tall-trunked trees come down close to the coast, with the sea edged by beautiful lakes and long sandy beaches.

A connection with history

For centuries the region was occupied by the Brinja Yuin people, with the Terosse clan located around Tuross Lakes. In the early days of European settlement, the better timber was felled, and good farming land cleared. Indeed the pattern of small isolated colonial settlements dating from the 1840s has largely survived to this day. Before modern roads, access to significant markets was by coastal shipping which had to weather the vicissitudes of shallow river ports and wharves on exposed headlands. The railway from Sydney reached the edge of Nowra in 1888, and overland travel to points further south involved a narrow road winding its way to Bega and Eden. Inland towns such as Cooma and Braidwood could be reached via rough tracks over the steep coastal escarpment.

Thomas Sutcliffe Mort (1816–78) is one of the great names of 19th century enterprise in Australia. He was an exceptional and talented individual – initially a merchant; then an auctioneer, notably in wool; evolving into a supplier of integrated financial services to pastoralists. Sydney’s Mort’s Dock and his refrigeration schemes (eventually the NSW Fresh Food & Ice company) were landmark ventures. He was a pioneer in many industries including mining, railways, wool, dairy, sugar, silk and cotton production.

In 1846 Mort purchased a property known as Percyville, on Darling Point. In love with the traditions of English Gothic architecture, he pictured Darling Point as a Gothic village, and facilitated the construction of a fine parish church, St Mark’s. He transformed his land with the construction of a handsome Gothic house, which he named Greenoaks, and the creation of a large and elaborate garden setting. Edmund Blacket was the architect of the house – which still sits on a bluff overlooking Double Bay and Sydney Harbour – and nurseryman Michael Guilfoyle implemented a 13-acre garden. Mort and Guilfoyle both took a keen interest in the promotion of horticulture, and plants and produce from the garden won numerous prizes.

By the 1860s Mort had acquired and consolidated 14,000 acres of land on the South Coast of New South Wales around the Tuross River and its fertile river flats. Centred on the village of Bodalla, this was to be a massive tenant-farmer community producing fine cheese. At Comerang he erected a large single-storeyed residence in a fine garden setting. Within the village he intended the construction of a grandly-towered stone church (1880, designed by Edmund Blacket and his sons) for the Anglican faith, and established a dairy factory; later, his son’s wife was the beneficiary of a fine shingle-clad Catholic chapel (1886, designed by architect John Horbury Hunt).

On Thomas Mort’s death his children inherited the Bodalla Estate. This continued as a major dairying enterprise for more than one hundred years, and over time quite a number of Mort’s descendants formed heartfelt associations with the district, connecting with the rural enterprise and enjoying the natural beauty, the beaches, and the fishing. Decay and fire saw the demise of Comerang and another significant local Mort property named Brou.

In the late 1980s Thomas Mort’s great great-granddaughter Christina Kennedy saw the opportunity to regain part of her heritage when her husband Trevor and she purchased Horse Island in Tuross Lakes near Bodalla, a beautiful and unusual setting for an envisaged house and garden.

The island, reached by an old hardwood bridge, was one big unfenced paddock, planted with kikuyu grass for grazing, and infested with weeds. Stands of old southern mahogany (Eucalyptus botryoides), forest red gums (Eucalyptus tereticornis) and ironbarks (Eucalyptus sideroxylon) shaded the open spaces, with an occasional large kurrajong (Brachychiton populneus) on the ridge. Spotty or spotted gums (Corymbia maculata) filled the central valley, mingling with subtropical rainforest. Along the water’s edge were mangroves and groves of she-oaks (Casuarina glauca).

First steps included weed control and the regeneration of the foreshore. While the whole island required thoughtful landscape conservation, the construction of a cottage and its garden setting was an important early initiative. This was a relatively modest venture, and only hinted at what was to come. The cottage, inspired by colonial traditions, has a Tuscan-columned veranda and a low hipped roof. As the builder’s debris was cleared away, Christina faced the challenge of making a garden setting for the house. By chance, her friend the botanical illustrator Robyn Mayo was visiting, and she suggested that using a palette of native plants would be truly complementary to the natural beauty of the place. At an early stage Christina recognised that a balance would need to be achieved, with more useful, controlled landscapes near the disciplined architecture of the buildings, yet easing into informal patterns of planting as one merged with the bush.

Christina threw herself into this new pursuit with great vigour: buying up relevant books, exploring the Australian Botanic Garden at Mount Annan, joining the Australian Native Plants Society, and befriending grevillea expert Peter Olde. Given Trevor’s childhood beside the sea in Albany, Western Australia – an area with a wealth of native plants – Christina decided that all Australian species were eligible for consideration in the creation of the garden.

As the cottage garden evolved, she saw the need to make a scrappy dam – which compromised the view – into an elegant water feature, and the chance for the grassy slopes between the tall trunked trees to become a compact set of golf links for Trevor. Like the writer Bill Gammage, she came to appreciate that at its best, the east coast Australian landscapes provided a kind of splendid understated parkland: with drifts of native grasses between clumped trees. As Christina gradually appreciated the ‘capabilities’ of the place, a much larger scheme of vistas, plantings and buildings came into view.

The immediate environs of the main house are formally planned, with the eastern garden’s rill, circular pond, curving colonnade and lushly planted border recalling great English prototypes. Yet! It is Pandorea jasminoides ‘Variegata’ crowning the colonnade, and the wonderful shrub border has Melaleuca hypericifolia ‘Ulladulla Beacon’ clipped in an undulating form interspersed with Gymea and Lord Howe Island lilies (Doryanthes excelsa and Dietes robinsoniana) plus massed kangaroo paw and grevilleas. Firewheel trees (Stenocarpus sinuatus) and red cedars (Toona australis) provide vertical accents. Across the lawn, a handsome composition of cycads and elkhorns provides a rich visual plinth to the house.

The entrance drive culminates in a gravel turning-circle before the house. The distinctive black shafts and spikey topknots of grass trees (Xanthorrhoea australis) underplanted with kangaroo paw, and bordered by sweeping clipped banks of pink rock myrtle (Thryptomene saxicola) provide one of the garden’s most striking impressions.

Elsewhere there is the Grevillea Garden – a species collection devised by Peter Olde – and places for potting and propagating, a vegetable garden, and guest accommodation with garden interludes for the visitor’s enjoyment, all linked together by grassy tall-treed fairways.

In nearly every direction are framed views to the sparkling waters of the Tuross Lakes, often with mountains glimpsed beyond. Christina in a recent interview said: ‘Anything I did was just an additional bonus; I don’t claim any credit for the beauty of this place, as it was beautiful when we came here’. Nonetheless, the garden at Horse Island is a truly impressive achievement. In the same interview Christina admitted: ‘I have never thought of myself as particularly obsessive, but I think it takes an obsessive personality to do something like this’.

A book capturing the essence of the place

In 2015 the State Library of NSW embarked on a survey of contemporary gardens within the state, and your writer was entrusted with the task of locating gardens worthy of inclusion in an exhibition. The year 2016 marked the 200th birthday of Sydney’s Botanic Gardens and 50 years since landscape design had become a profession. The quest was to discover gardens created since the 1980s which were truly innovative. We were not looking for Edna Walling look-alikes. While I had known Trevor and Christina Kennedy since the 1970s – when they had moved into a house with a garden planted by my mother – I was generally unaware of Christina’s deep love of place, of history, and of gardening. As I began to make my garden enquiries, several people took me aside to tell me that the Kennedys had created something both substantial and significant near Bodalla. On an island, no less!

The visit to Horse Island was one of the highlights of the garden survey, as the place was at a pitch of perfection. Such moments in a garden are the result of huge effort under the surveillance of a fastidious eye. To capture the essence of the place the State Library commissioned photographer Jason Busch and filmmaker Michael Power to make a permanent record for their archives. Their images formed an important element of my exhibition ‘Planting Dreams: Grand Garden Designs’, at the State Library of NSW September 2016 – April 2017.

Christina – while recognising that both the buildings and the garden would further mellow and mature – could see that her work at Horse Island had reached fruition. Realising that all such creations are ephemeral, she decided to make a full and permanent record of Horse Island. This would enable her descendants and others to appreciate the special qualities of the place.

Hence the book, perhaps the finest monograph on an Australian garden yet produced. The generous landscape format is filled with specially commissioned photographs by Jason Busch, who reveals himself as one of Australia’s great landscape photographers. The images are subtle and evocative and convey the moods of the landscape in different weather and different seasons. Christina’s text is engaging and thoughtful, and her own photos give substance to the excellent catalogue of plants grown at Horse Island.

One of the nicest aspects of this book is the generous acknowledgement of all the people who helped create this splendid garden in a sublime landscape; of the commitment of the photographer; and of those who ensured a truly fine and well designed publication.

This article was originally published in Australian Garden History, volume 29 no 1, July 2017, and titled Christina’s garden.

Horse Island: A garden of grandeur 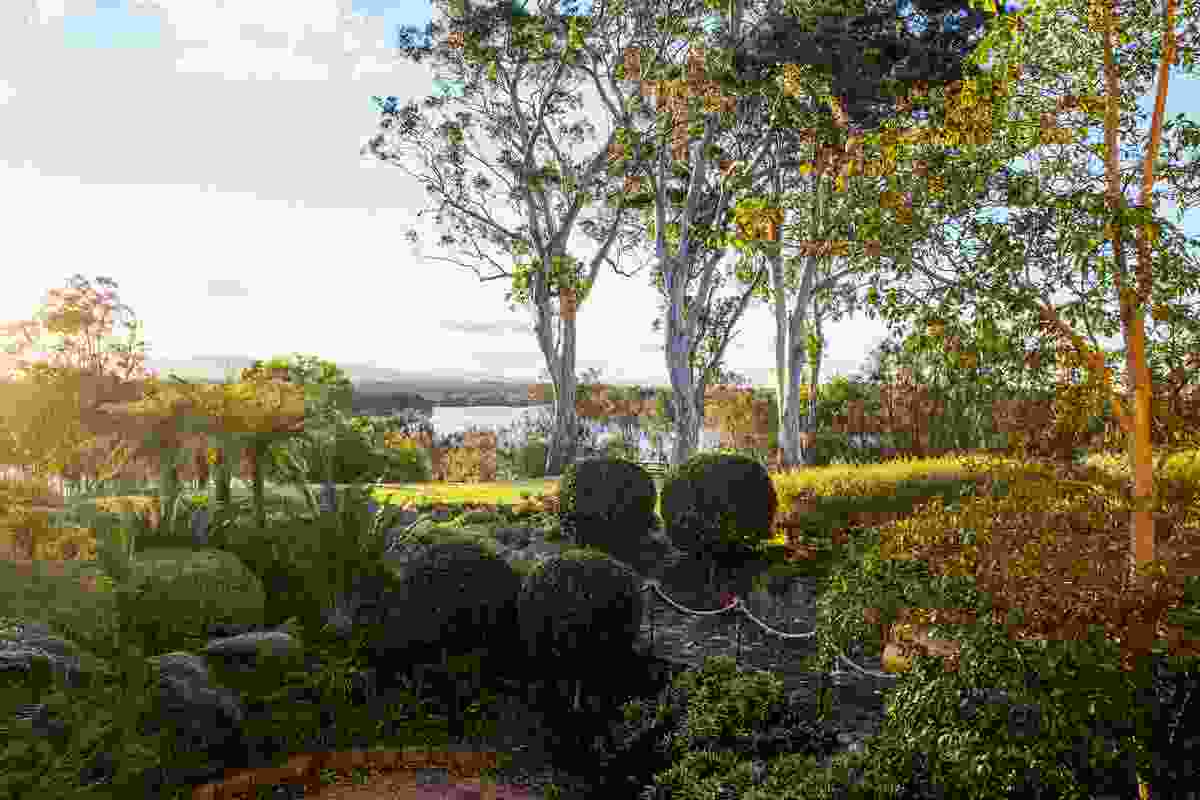 Western view from the big house. 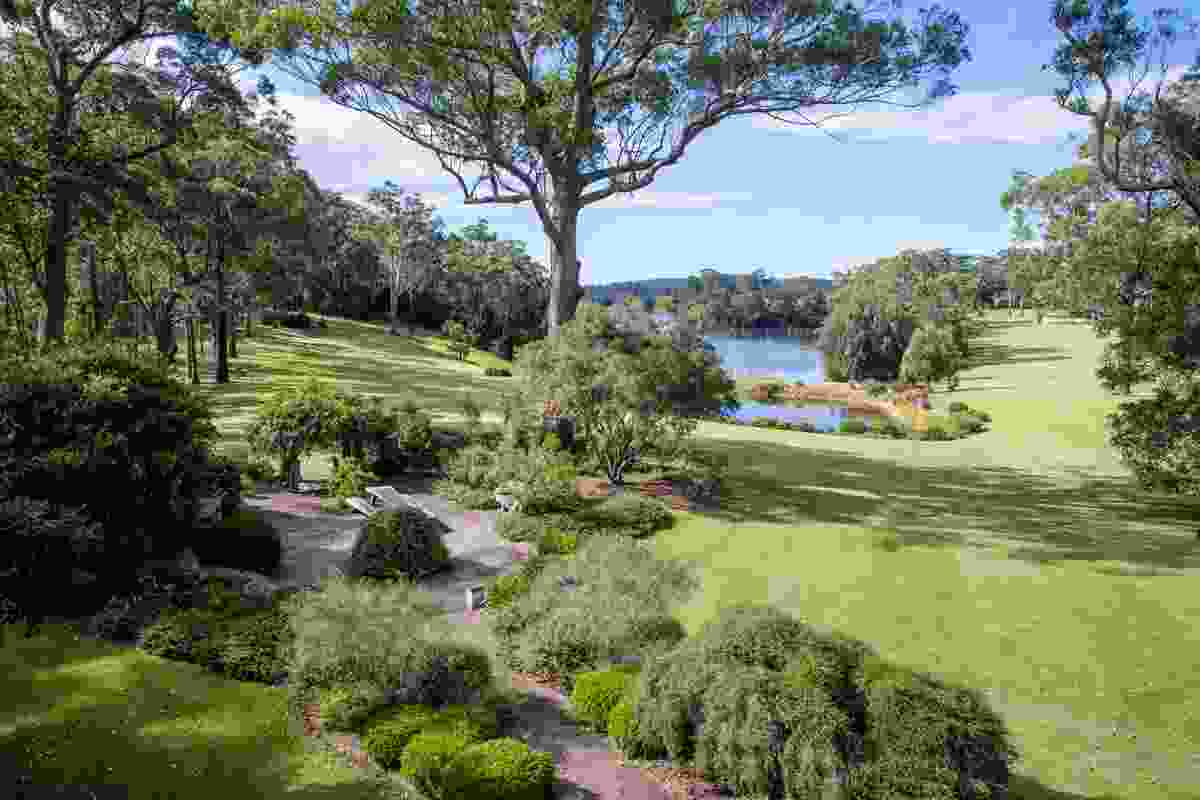 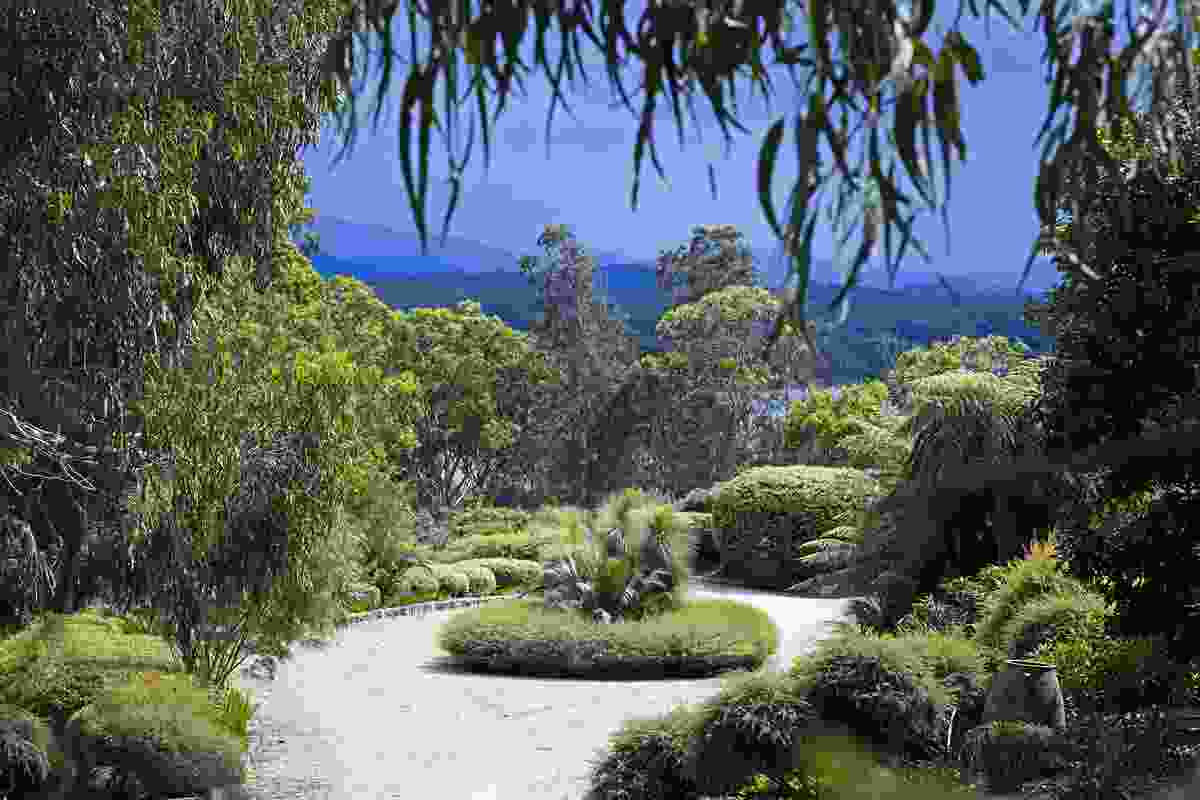 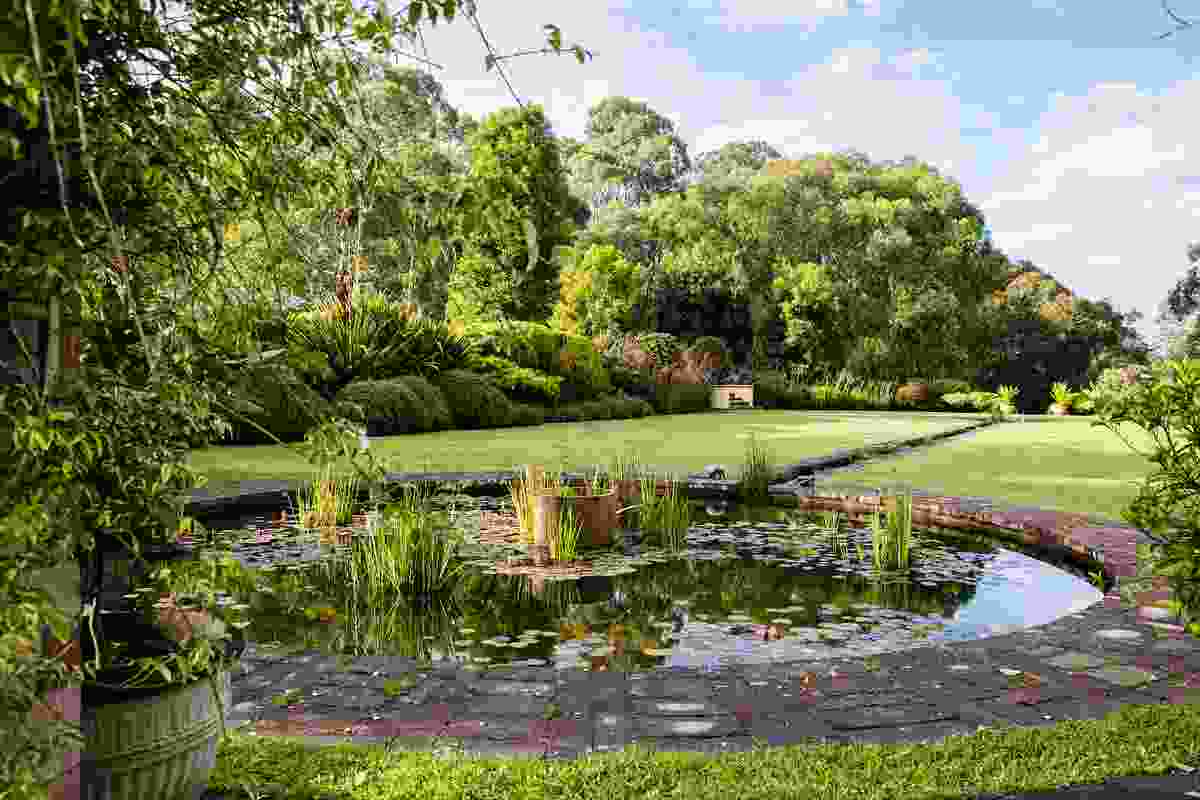 Rill from the northern end. 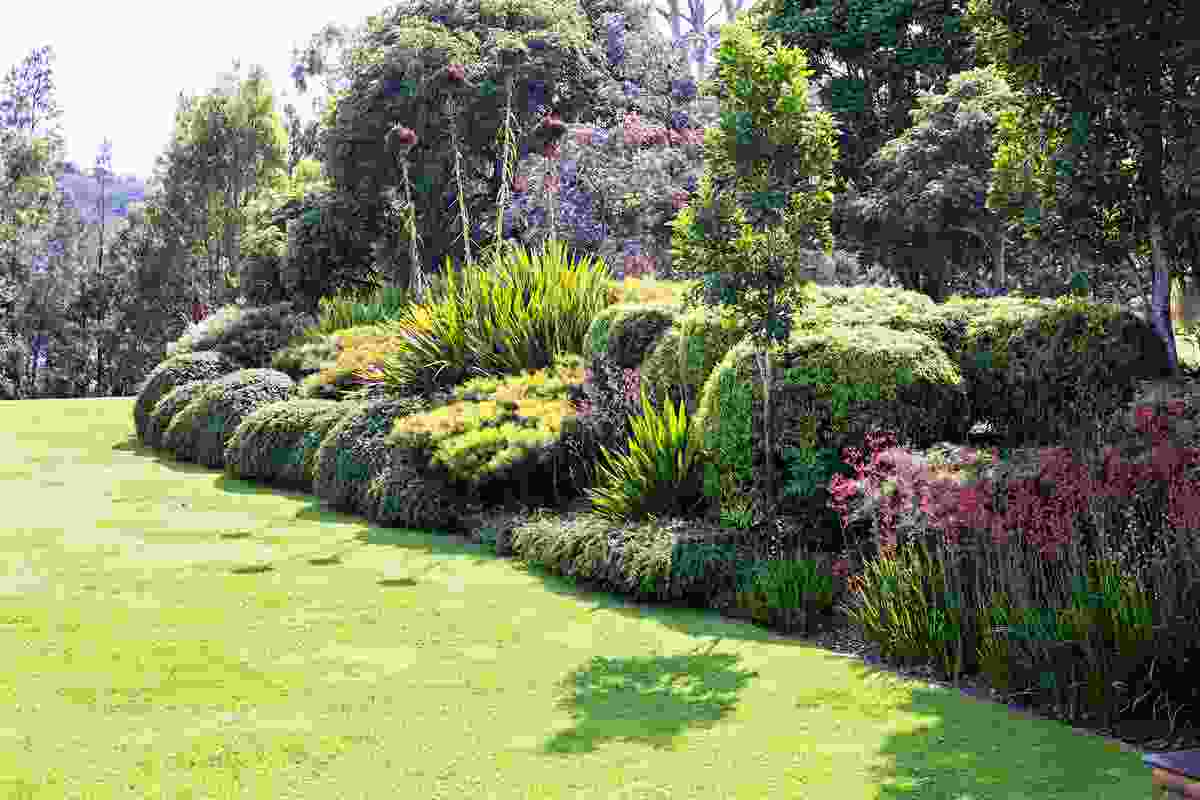 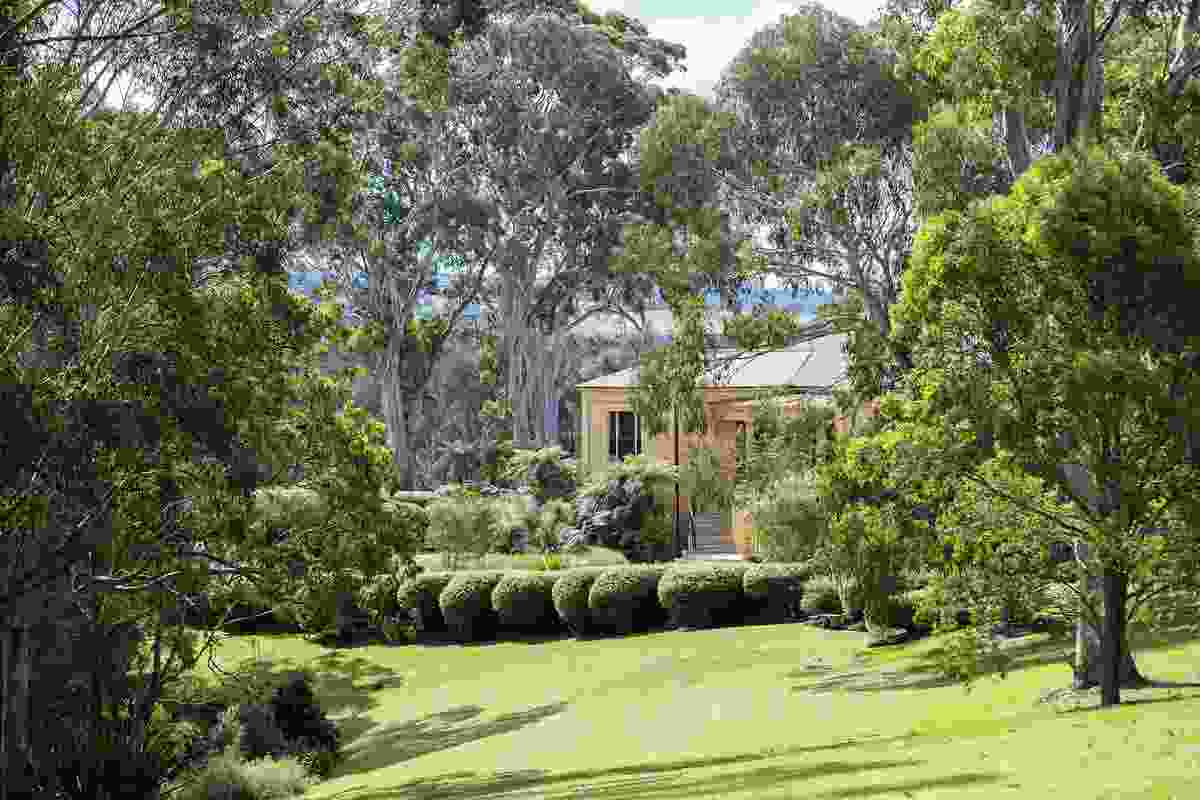