Valuing the civic: the future of Federation Square

Federation Square is a major gathering place and locus of public life in Melbourne.

In light of the recent addition of Melbourne’s Federation Square to the Victorian Heritage Register, the Victorian state government has announced a review of the square’s governance, finances and built form, in consultation with the community1. In undertaking this review, the Victorian state government has recognized that the people of Victoria feel passionately about their public square and that the proposal, announced in December 2017, to demolish the square’s existing Yarra Building to make way for an Apple flagship store was a symptom of, not a solution to, a broader range of issues.

What are the challenges facing today’s contemporary town square – and how might Fed Square meet these challenges in the years to come? Traditionally the town square was physically defined at the confluence of governance, faith and commerce. Anchored by the town hall and the church and animated by the local market, the town square brought together local government, religion, commerce and community to form public and civic space. It was, and still is, the focus of public and civic life.

In the contemporary context – without the anchor of the town hall, in an increasingly secular and diverse community, where commerce is no longer defined locally but by global players in a global marketplace – how do we define the town square in the fabric of our city? To make a town square we need to place people, community and culture first. Fed Square has been successful as Melbourne’s town square for many years. It’s foundations are sound – it is well-loved, attracts more than 10 million visitors a year and is internationally recognized for its architecture and as a benchmark for public space. It is located, physically and conceptually, at the heart of the city, where the city grid, sporting precinct and arts precinct meet. The square is anchored by cultural institutions – ACMI (Australian Centre for the Moving Image), the National Gallery of Victoria (NGV) and the Koorie Heritage Trust – and is a unique and significant element in Melbourne’s network of public spaces and public institutions. However, as with any public institution, to remain relevant it must address contemporary needs.

As part of the review process, the state government is developing design principles to guide future changes at the square. This move is long overdue and care needs to be taken to ensure that any decisions respect the square’s heritage significance and are consistent with its value as a public, civic and cultural place.

A town square is first and foremost a place for people to gather. Fed Square’s physical form supports this – its buildings frame the square and embrace the public, they have minimal signage and no advertising. They form an understated backdrop for public life and community events. Spaces that allow people to flow through are more typically associated with shopping malls and retail precincts, not civic and cultural programs. The city has changed significantly since the square opened and with the masterplanning of the arts precinct underway and upgrades to the sporting precinct under construction, the square has a unique opportunity to address broader urban connectivity at its edges.

However, the square as a public, civic and cultural gathering place must be maintained and reinforced. To do this Fed Square needs the right people and the right vision. The square’s operations are managed by Fed Square Pty Ltd, a public non-financial corporation tasked with meeting the objectives outlined in the square’s Civic and Cultural charter.2 In recent years the square’s cultural and civic objectives have been marginalized as the focus at the square has shifted. Propelled by the narrative that the square is losing money, more and more “revenue-generating initiatives”3 and promotions have been taking place at the site, including the July 2019 Bunnings “Click and Collect” launch, the [May/June 2019] Uniqlo pop-up and the Crown Bet promotion held in the square in March 2018. This type of programming places commercial interests first and relegates Fed Square’s cultural and civic objectives to second place. This is not to say there should be no commercial activity at the square, however programming and events there should not be driven by commercial objectives and must reinforce the square as a place for people and community.

Fed Square’s funding needs to be addressed. The square’s annual revenue more than covers the costs of its operations: its losses are a result of depreciation and amortization. The square’s annual reports assess its finances entirely within its boundaries; however its broader economic benefits must be considered. Without taking into account the square’s value to the city of Melbourne and the state of Victoria, we fail to truly appreciate its broader community value. Should a place as important to public and civic life as Fed Square be run like a business and managed like a corporation? We do not expect public institutions such as the NGV or the Royal Botanic Gardens Victoria to pay their own way. The state government funds the Australian Grand Prix to the tune of over $60 million a year, because it recognizes the broader economic benefits that the event brings to the state of Victoria. Likewise, the state government needs to recognise Fed Square’s unique role in the city’s network of public spaces and civic institutions and fund it accordingly.

ed Square has the difficult task of being the town square for all of Melbourne’s citizens. For this obligation to be meaningful, the square needs to focus clearly on what it was designed to be – the heartbeat of Melbourne, the “place to see and feel the pulse of the city”4 – or it risks ending up as just another retail space in the city’s CBD. Town squares are defined by people and community and by the civic activity that plays out within them. The physical form of a place can enhance and frame public life, but it is community and civic and cultural activity that must be placed at Fed Square’s heart.

In today’s context of global ubiquity, where brands are deployed across cultural borders without change to their shape, form or visual identity, Fed Square is unusual. Although part of a global conversation on public space, Fed Square could not be anywhere else – it is a uniquely Melburnian proposition, with broad Australian undertones. It is iconic and yet understated. Its pathways are resonant of Melbourne’s laneways – Fed Square offers no direct connection to the river, instead it makes you discover the Yarra (Birrarung) like the laneways help you discover the city – and this is a lovely thing. The catenary lighting in the square references the city’s overhead tram lines and the broad variegated expanse of pink and red Kimberley sandstone is reminiscent of the Australian desert — even on a wintry Melbourne day.

Melburnians and Victorians feel connected to Fed Square for many reasons, but mostly because they see it as their public space – a place made for them and by them. Fed Square is, first and foremost, Melbourne’s place of public gathering – it is where Victorians have protested, commemorated, said sorry and celebrated. Public space is where we enact our citizenship. In town squares, we are citizens first, not consumers or stakeholders. To protect Fed Square’s social, cultural and civic values into the future, we would do well to remember this.

Valuing the civic: the future of Federation Square 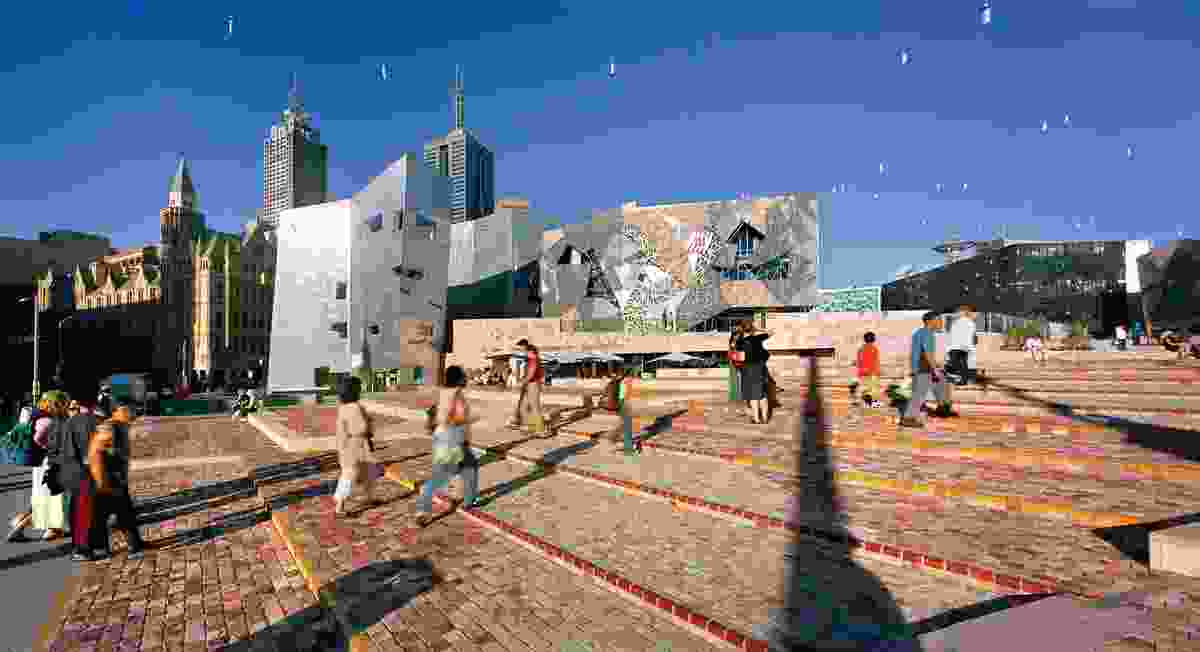 Federation Square is a major gathering place and locus of public life in Melbourne. 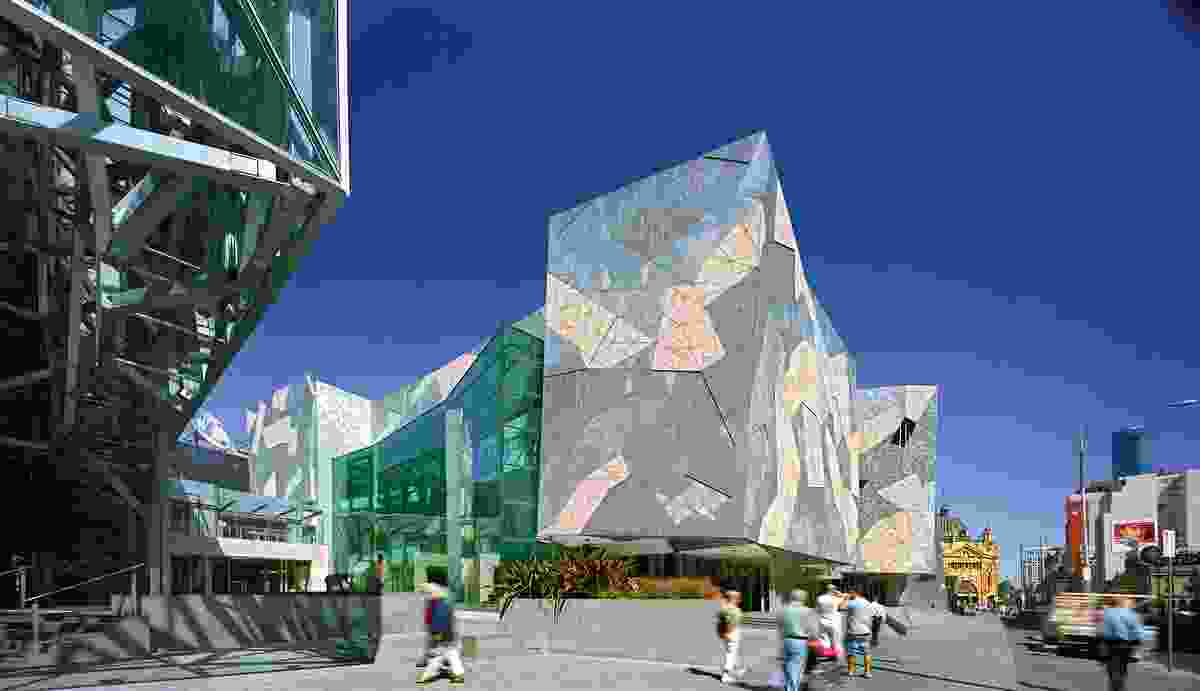 The buildings of Fed Square offer an understated backdrop for community activities; the square’s many pathways recall Melbourne’s distinctive laneways. 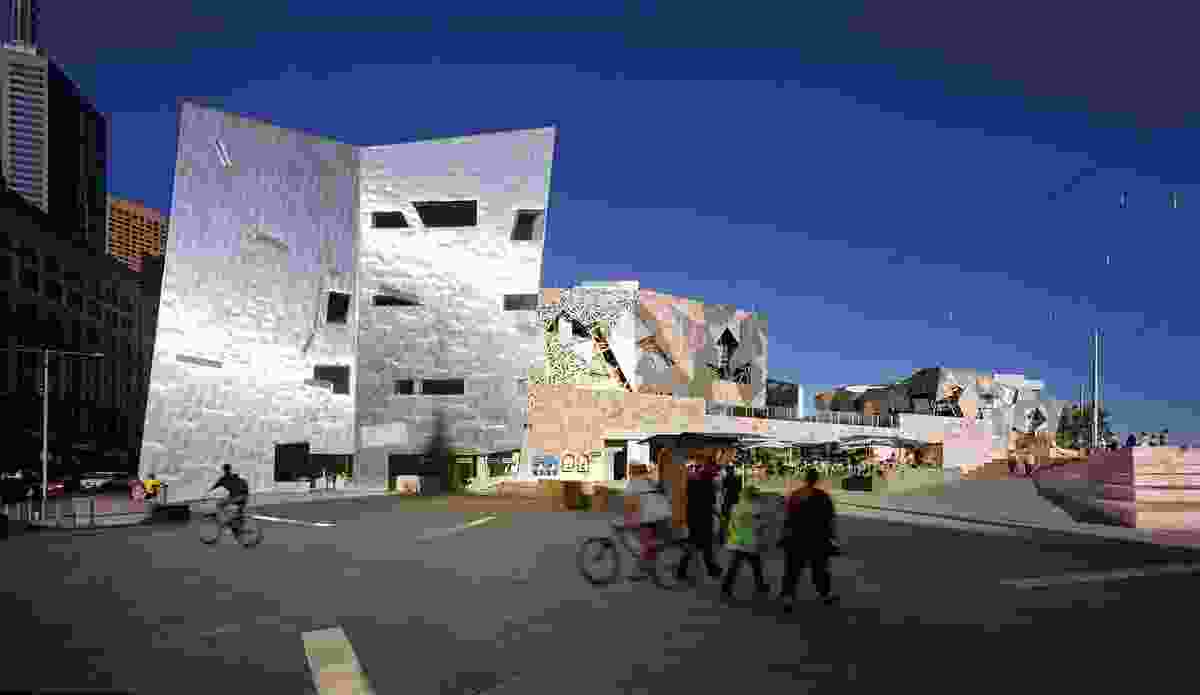