Valley Lake Lookout is set within a new residential estate built on the site of the former Niddrie Quarry in Melbourne’s north-west.

Valley Lake Lookout, designed by McGregor Coxall and completed in early 2018, lies within a new infill residential development on a former quarry site, between Niddrie and Keilor East in Melbourne’s north-west. The lookout surveys a lake and the stone face of the former quarry that are the heart of the site.

Assessing the public realm of a residential development in progress is often an uncertain undertaking. I assume that Development Victoria will err on the side of generosity and provide higher quality, more thoughtfully designed public space than the run-of-the-mill. In considering this project I have situated it within its broader context, as this speaks to the poetry of the design and its place in the urban fabric more strongly than a focus on detail and materiality alone. This approach comes in part from my initial reaction to the lookout – that it seemed to be a lost opportunity. I was looking for a statement, a landmark for visitors to the estate, that stood in obvious counterpoint to the rather more blatant piece of public art sited in the middle of the lake. I expected a large sculptural gesture to the landscape, but instead I discovered the lookout by following the landform. This design is not loud or obvious and to access it one needs to wander.

The forty-eight-hectare site of the former Niddrie Quarry was purchased in 2000 by the Urban and Regional Land Corporation. Development began under VicUrban in 2006, continued under Places Victoria and has been completed under Development Victoria. The site, where the road base was quarried from the 1940s to 1975, is relatively close to the centre of Melbourne (thirteen kilometres) and even closer to extant farmland. The aim was to create “a premium residential estate” and according to the Development Victoria website, 30 percent of the site is given to open space. Unfortunately, some of this is now inaccessible, with the clifftop walk along the sheer quarried stone face (which has the lake at its base) apparently closed for safety reasons.

Anyone familiar with this part of Melbourne will know the surrounding topography, which is dominated by the flatness of the basalt plains, with relief provided by creeks following erosion paths. Occasional riverflats give a gentle approach, although mostly the waterways lie at the base of quite steep escarpments. Nearby, the Calder Freeway drops down into the valley of the Maribyrnong River and reveals the landform in what is still one of my favourite approaches into Melbourne. On the floodplain of the river to the west, the old market gardens face a steep and virtually impassable escarpment to the east. Brimbank Park and Organ Pipes National Park similarly show the drama of these distinctive local landscapes.

The industrial form of the former quarry site is surprisingly sympathetic to the surrounding topography and emphasizes this strong and defining feature of the area. Lying along the course of Steele Creek, the Valley Lake development links into the waterway’s linear reserve with a network of walking and cycling trails. Its street and housing layout seems to follow the contours created by the area’s former use, in part forming an amphitheatre around the stone quarry face. This is the direct context for the lookout, which sits along a ridge formed by the quarry workings and ends with a slight cantilever over the knoll, affording an elevated view of the old quarry face and the lake below.

Everyone enjoys a view and yet the convention of climbing up in order to look out and over carries notions of authority and ownership that hold a certain ambivalence for me. Such expansive views also call for a grand statement, a visible gesture of power that matches in form what those views unfold in scale. Within this local topographical context, however, where looking down and into is more usual, the contained scope of the view is altogether more intimate.

This was the basis for my earlier assumptions. Unconsciously, I had expected this urban lookout to be boldly, defiantly visible and to function as a piece of public art. On reflection, though, the delicacy of the structure, of its place in the landscape, is its strength.

What Valley Lake has is an elegant and understated piece of public infrastructure. It’s notable for what it is not; it stands out for its quietude. Despite the predominance of the surrounding housing, it is the remnant industrial topographies that define the space and draw our attention. The quarry face and the ridgeline that holds the lookout sit in counterpoint, bringing a level of drama and visual interest to the site. The clearly visible line of the lookout running along this ridge provides definition and balance, continuing to do so after dark, with lighting along its length. That line acts as a palimpsest, both new and echoing an industrial trace – an impression that is reinforced by its considered materiality. Robust and textured, the concrete of the lookout’s walls echoes the scraping that began the original quarrying work, though the metal mesh (which was not the material originally selected) distracts a little from the textured linearity.

Up close, the planting seems to have been less successful. Such a highly disturbed site exposed to the full force of the wind from all directions makes for inhospitable growing conditions; however, some species are proving tenacious. Unfortunately, the grasses that the designers intended to include to provide a momentary sense of enclosure on either side just before the view is revealed, don’t currently seem to be in evidence.

It is impossible to assess this design without considering the changes wrought across its life so far. While patience is an inherent feature of the landscape architecture profession, this relatively small project stretches that to its limit. Across some eleven years, McGregor Coxall weathered three major changes of identity for the client, changes in personnel and project managers, the intermittent focus and pause required of the designers, and (somehow) managed an unchanging budget.

Some of those changes (like the later specifying of the industrial-style mesh for the walking surface) point to missed opportunities that were perhaps unfortunate but unavoidable. More critical is the loss of area at the entry to the lookout itself, where there is a notable lack of any sort of obvious place for people to pause or gather. Initial plans provided for planting alongside the housing and there was some negotiation about the reduction of the lookout’s approaching roadway. Both would have given a more appropriate spatial presence to the lookout as well as allowing for trees and welcome shade.

Regardless, Valley Lake Lookout is a design thoroughly grounded in its spatial and temporal contexts. It is a design born of the geology of the region, the industry that geology gave rise to and the site’s contemporary incarnation. Creating opportunities for people to understand their landscapes is one of the most important things we do and the designers should find the response to this project gratifying. It’s been embraced, not only by those living close by, but also by others from nearby suburbs, curious to simply come and have a look. 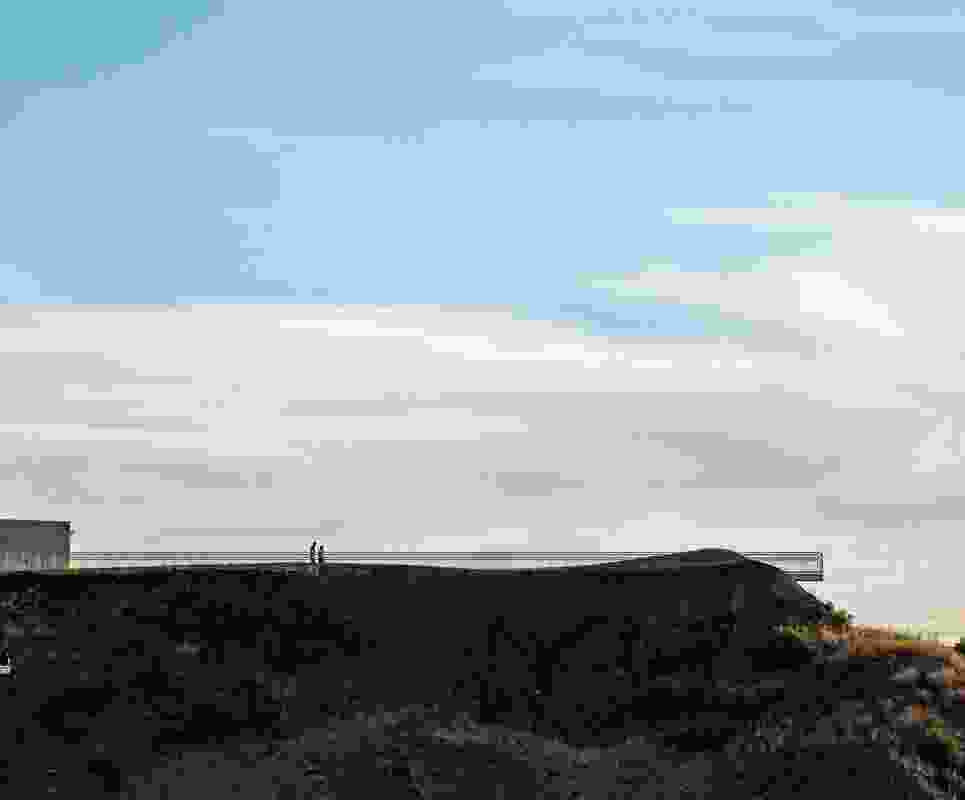 Valley Lake Lookout is set within a new residential estate built on the site of the former Niddrie Quarry in Melbourne’s north-west. 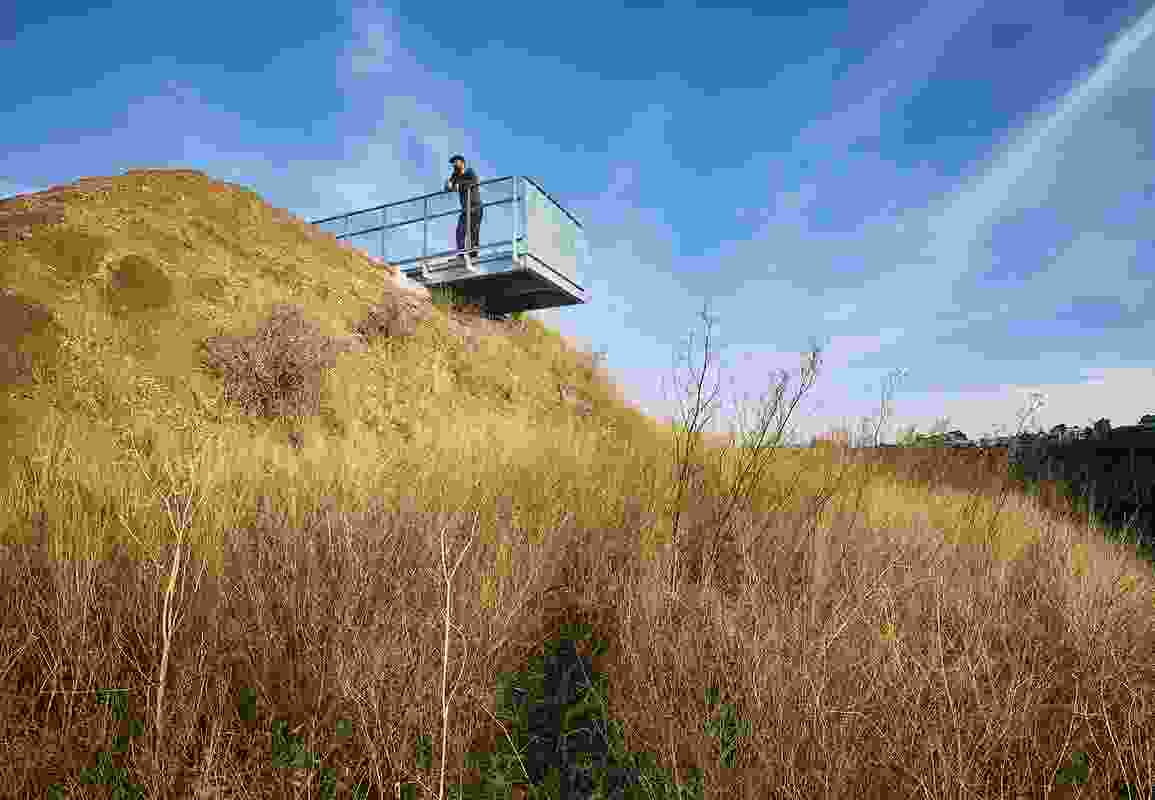 03 Cantilevered slightly over the edge of the knoll, the delicate steel structure sits lightly within the landscape, emphasizing the contours of the site. 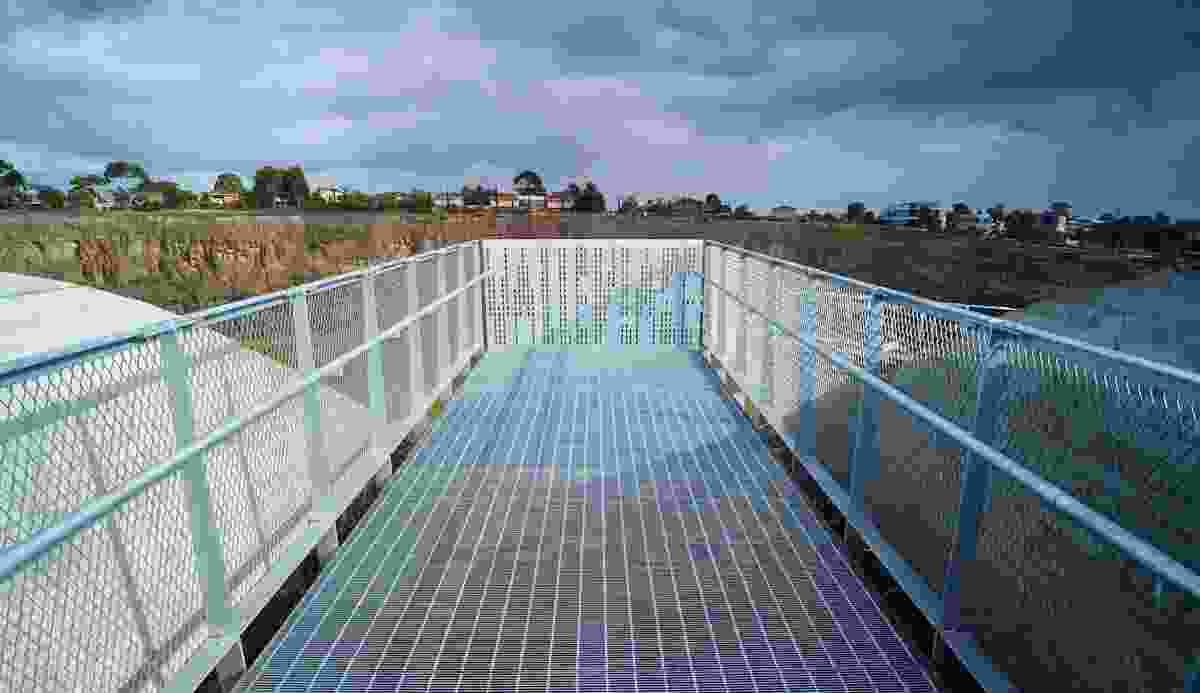 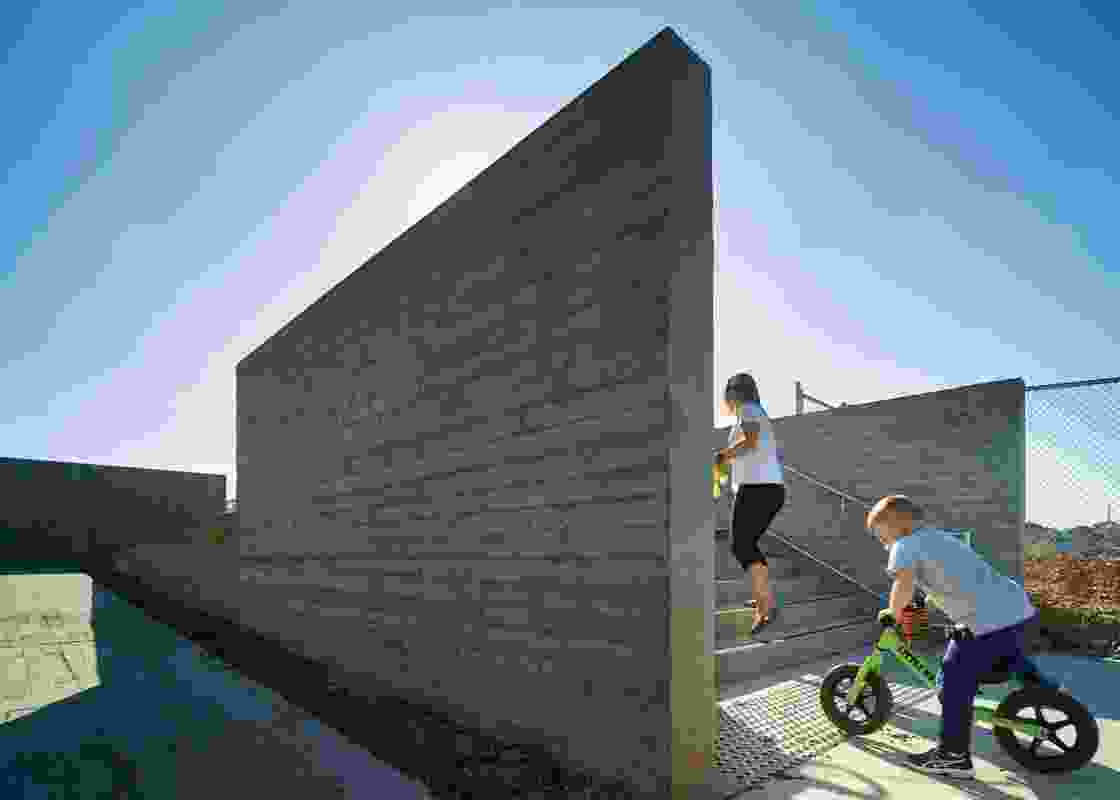 The textured concrete of the lookout’s walls echoes the scraping activities that began the original quarrying work on the site. 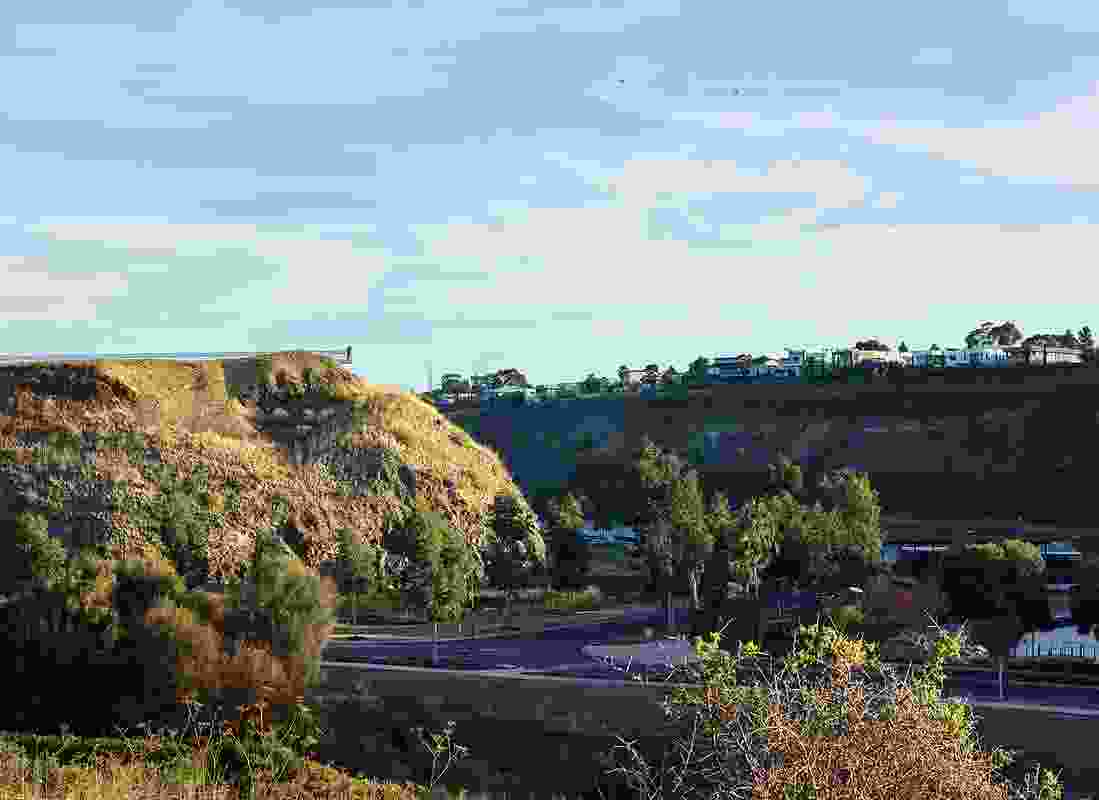 Tracing a ridge carved out by quarrying, the lookout offers a view over the lake and, on the opposite side, the old stone quarry face.