The redevelopment of Perth’s iconic Scarborough foreshore by TCL and UDLA is bringing visitors, new and old, back in droves.

Along the upper promenade, arbours by Chaney Architecture that feature a colour pattern developed in collaboration with Aboriginal artist Sharyn Egan provide a flexible space for events.

“ … the beaches ran north and south, white and broad as highways in a dream, and men and babies stood in the surf while gulls hung in the haze above, casting shadows on the immodest backs of the oilslicked women.” – Tim Winton

As in much of coastal Australia, beach culture is ingrained in the psyche of Perth. Those born in the city seem to inherit their beach preferences, while imported residents test the varied sand strips via proximity and activity – the linear development of Perth has put the beach within cooee of everyone, just head west. Whether it’s for swimming, surfing or snorkelling, the beach remains a highly egalitarian place, with beachgoers quite literally stripped bare of most class peripherals, shark net or not.

That interstitial space between surf and suburb – the foreshore – is, however, a more contested space. Large expanses of carpark graded horizontally into vulnerable dunes have been acceptable in Perth, yet the vertical development of buildings remains contentious. At odds with contemporary tourism and the state’s desire for density, residents of beachside neighbourhoods continue to offer strong resistance to development, seeking to protect their enviable lifestyles. The local beach is a cultural landscape, steeped in sentiment and tradition. Locals seem to have no desire to change this beloved space into a destination for others from farther afield.

In the context of Perth, the demographic and vibe of Scarborough Beach, to the city’s north, has always been a bit different. Dominated by cars since the 1930s, Scarborough’s foreshore has at times resembled an airport runway. With the arrival of rock and roll in the ‘50s, Scarborough Esplanade’s vast concrete terrace became known as the Snake Pit, as throngs of bodgies and widgies gathered to dance and eat burgers, the adjacent carpark perfect for car drags. With all the youthful humanity flocking there at the time, the culture of “Scabs” (as it’s more colloquially known) was about more than the beach, and was a home for drag racing, bikies, beer, dancing and tourists. In the ‘80s, the late Australian tycoon Alan Bond’s desire to view his America’s Cup yachts sailing from Two Rocks to Fremantle made Scarborough the ideal location to build his Observation City hotel. The eighteen-story building of uninspiring architecture but commanding ocean views was, and remains (in its present incarnation as the Rendezvous Hotel Perth Scarborough), Perth’s only beachside highrise.
The bogan-meets-rebel repute of “Scabs” lingers into the present.

The recent ambitiously programmed redevelopment of the Scarborough Esplanadehas now quite certainly transformed the foreshore and its accompanying demographic of visitors. With the Metropolitan Redevelopment Authority and City of Stirling as client, landscape architecture firms TCL and UDLA together took the lead role in designing a landscape that could house a new municipal swimming pool, skate park, climbing wall, playground, cafes, future development and, of course, parking. Their masterplan is underpinned by two robust and well-executed moves. Firstly, the Esplanade – the historic north–south dragway – has been rejigged to provide pedestrian priority while maintaining road legibility. This has delivered a very welcome reduction of the formerly prominent entry roundabout, slowed vehicular movement and created an entry plaza.

The landscape architects’ second defining move was engaging the existing terrain to create two north–south promenades on different levels; the upper promenade is tied to the level of the Esplanade, while the lower provides casual access to the beach. The building program has been sited within this datum. At the southern end, the new swimming pool and surf club are built into the terrain. Here the upper promenade becomes a landscape balcony, offering views and connections to the pool swimmers below. The lower promenade opens into a piazza framed by the pool’s entry and the surf club’s lower facade – with this, the buildings have become part of the landscape, more sculptural than architectural. Posses of visitors scoot through or linger; often accompanied by the added pleasure of delighted cackles of laughter spilling from the restaurant above the pool.

To the north, the promenades flow across the terrain, moving alongside the new skate park designed by Enlocus, past a well-scaled Sunset Hill, and finally converging at the new Whale Playground. Logical in plan and rhythmically executed on the ground, these promenades define a vibrant and encompassing cadence for the entire foreshore. The terrain flows between upper and lower promenades, in and around, past people-watchers and skaters, seamlessly flowing around structures and play zones; even my teenage companion is compelled to note: “the flow, it works … I like it.” The hips loosen, the saunter relaxes, the effortless grooves of Perth’s own psych-rock band, Tame Impala, would make a fitting soundtrack.

Sunset Hill is a delight for any number of reasons. No matter how hot or cool the weather is, the grassy knoll, with its generous scale, front row position and casual gradient, seemingly causes visitors to indulge in an instant lie-down. Built for viewing the sunset, this happy hill, rising above the Esplanade, makes a terrific spot to watch both surfers in the sea and toddlers on the ground negotiate the thrills of a decent wave/slope without fear of collision.

The best of the redevelopment’s public art integrates the Whadjuk Dreaming story of the whale that delivers the spirits of the dead back to the mainland after death. It was this story that inspired the creation of the Whale Playground. Embedded in the beautifully resolved concrete whale bones are the drawings of the three Maslin children who lost their lives in the MH17 airline tragedy in 2014. The images speak to the children playing among the bones, celebrating the lives of Mo, Evie and Otis Maslin, while relaying the tale of a family’s profound loss.

At the redeveloped Scarborough foreshore, parking areas are still substantial, but the car has released its hold. Now parking is intersected with functioning, simple but handsomely designed rain gardens and access paths. Throughout the foreshore, elements and details are strong yet humble, made from ordinary materials but exceptionally executed. This includes, most notably, the ample, low-slung concrete lounging pads, the lower limestone wall of Sunset Hill and the inviting timber and concrete beach benches. Overall the spaces are cheerful, balanced and welcoming.

The one break in the design’s overall rhythm is the retention of the existing beachfront amphitheatre in the centre of the site, a remnant of a previous masterplan. This was the client’s imperative; the structure’s dated turret landings are one of the few clunky impediments to the flow of the promenades and its new and fluidly inscribed topographies. Presently, this “heart” of the Esplanade remains vacant, with bespoke shade structures by Chaney Architecture with Sharyn Egan serving as placeholders for the future promise of more building infrastructure. The area is a bit open and hot as autumn turns to winter, however, sunset markets and food trucks have made vibrant use of the space over the summer months.

There is no longer a concrete heaviness nor patina of tattiness at the Scarborough foreshore. The adjacent shopping centre along the West Coast Highway is still in need of an invigorating upgrade and the area’s cafes and bars still attract tourists and locals looking for an uninhibited night out. But the foreshore redevelopment has brought the return to Scarborough of a long-missing demographic – the multicultural, multi-generational family. From observation and commentary, Perth families are delighted with the redevelopment’s design, returning to the Esplanade in gaggles. The pool has been thriving, growing in attendance and membership far beyond expectation. Even on a rare rainy and cloudy day in Perth, the tourists, grandparents and teenagers here are grooving; Scabs’ Esplanade, now a convivial destination for families and tourists, is humming to a new delightfully upbeat tempo. 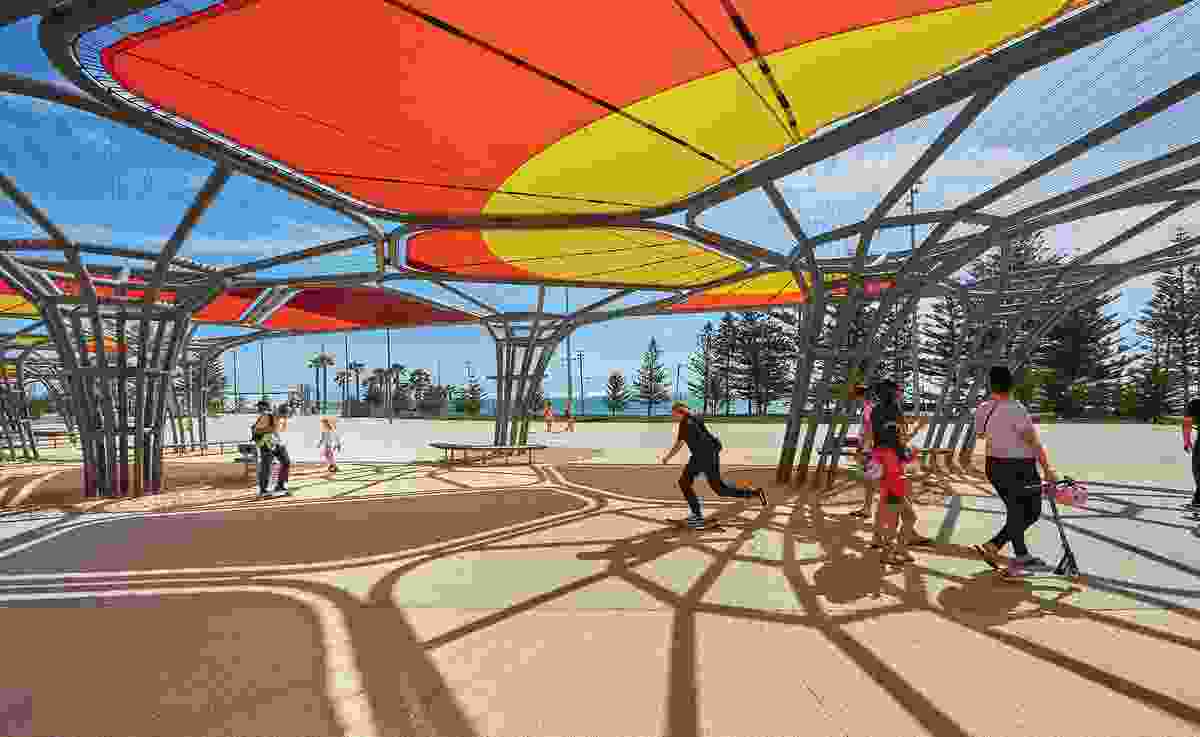 Along the upper promenade, arbours by Chaney Architecture that feature a colour pattern developed in collaboration with Aboriginal artist Sharyn Egan provide a flexible space for events. 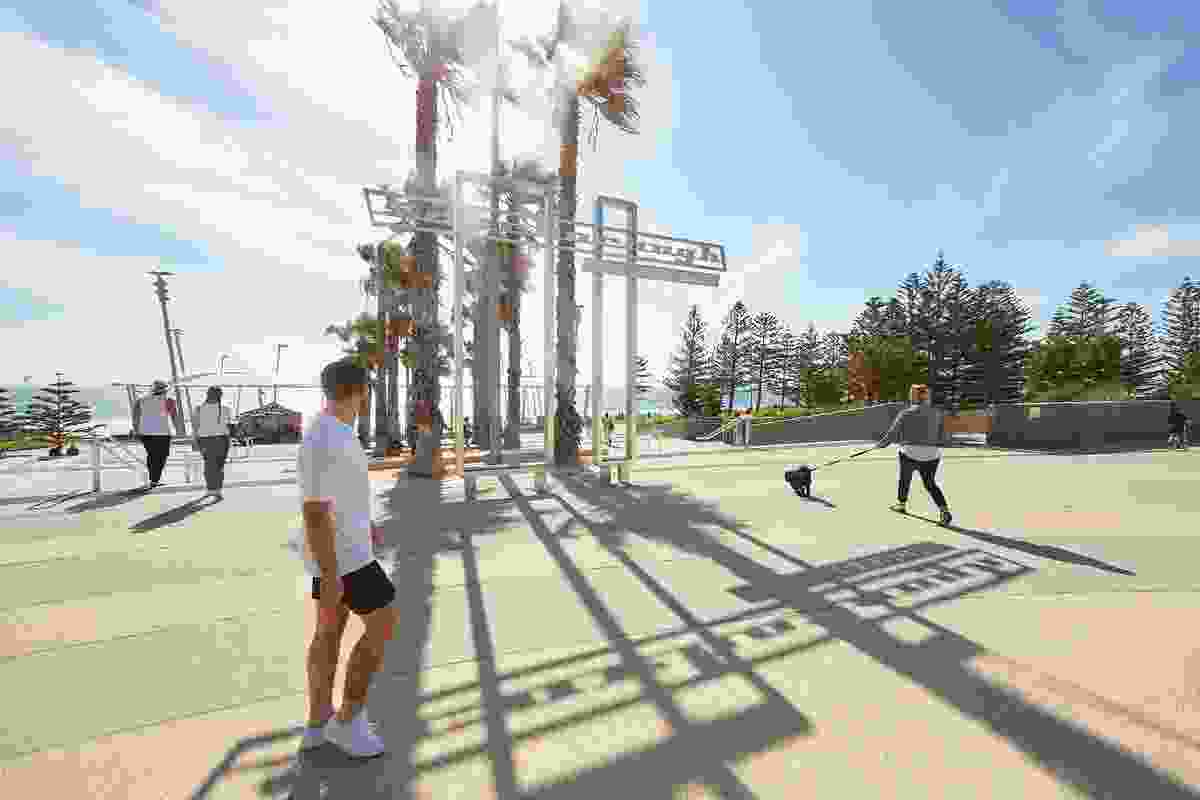 The upper promenade of the transformed Scarborough foreshore provides access to retail and food and beverage outlets, civic squares and new development. 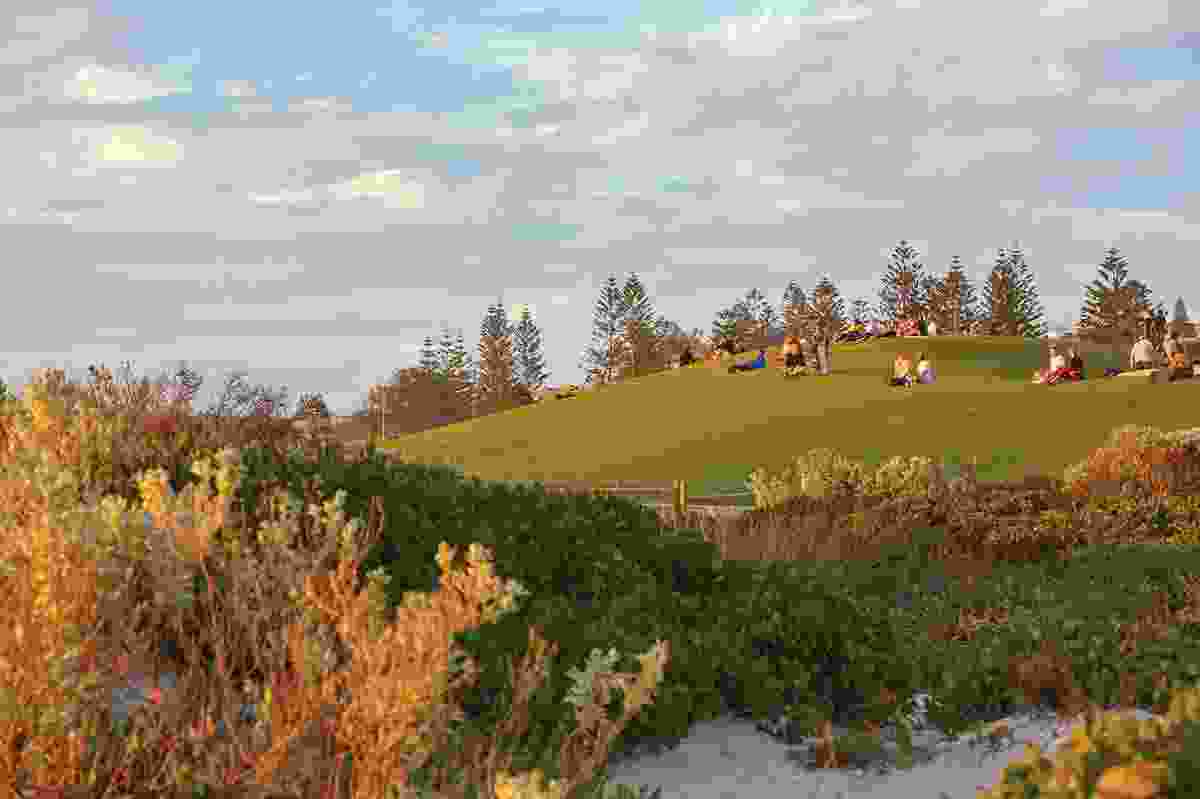 Rising eleven metres in height, grassy Sunset Hill offers an elevated perch from which to enjoy sunset views over the Indian Ocean. 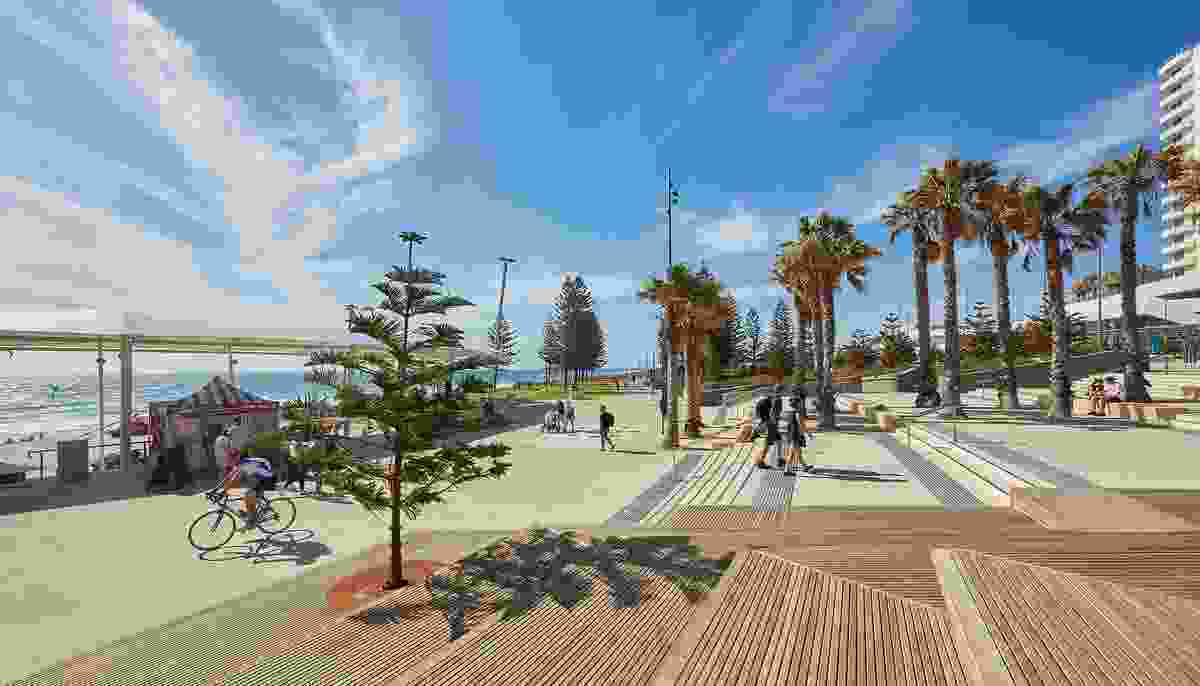 Stairs that double as plazas connect the upper promenade to the lower promenade where more active uses, including jogging and cycling, are encouraged. 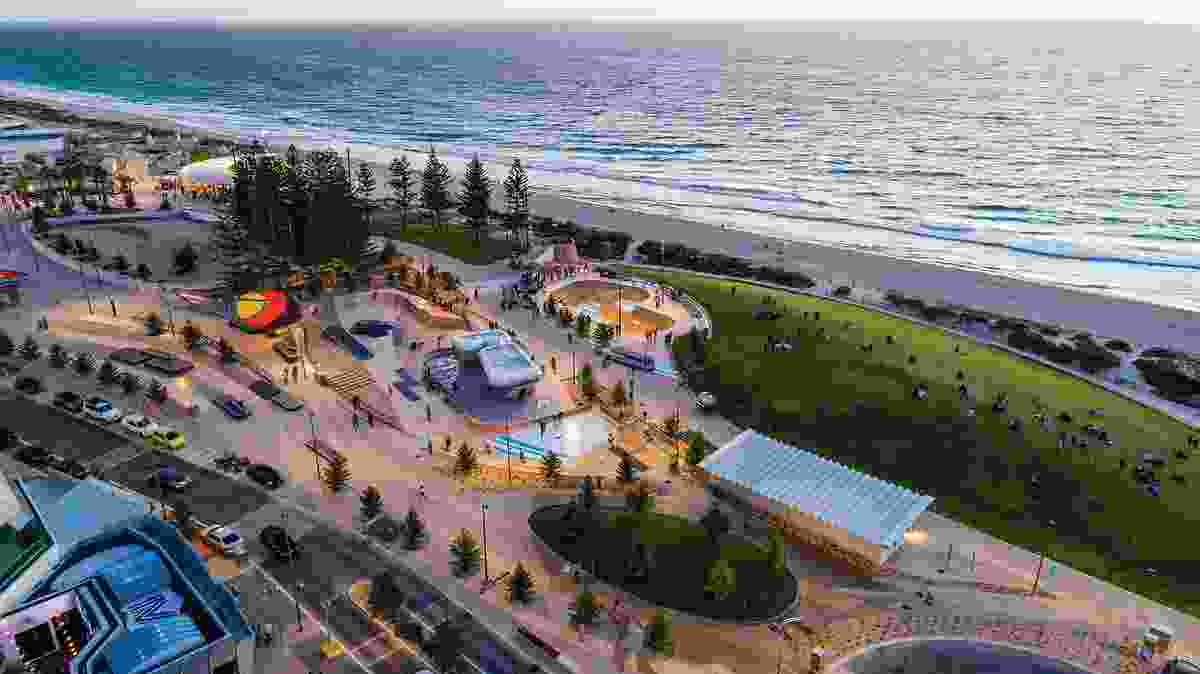 The fluid terrain of the redeveloped Esplanade and foreshore accommodates both intensive as well as more extensive activities. 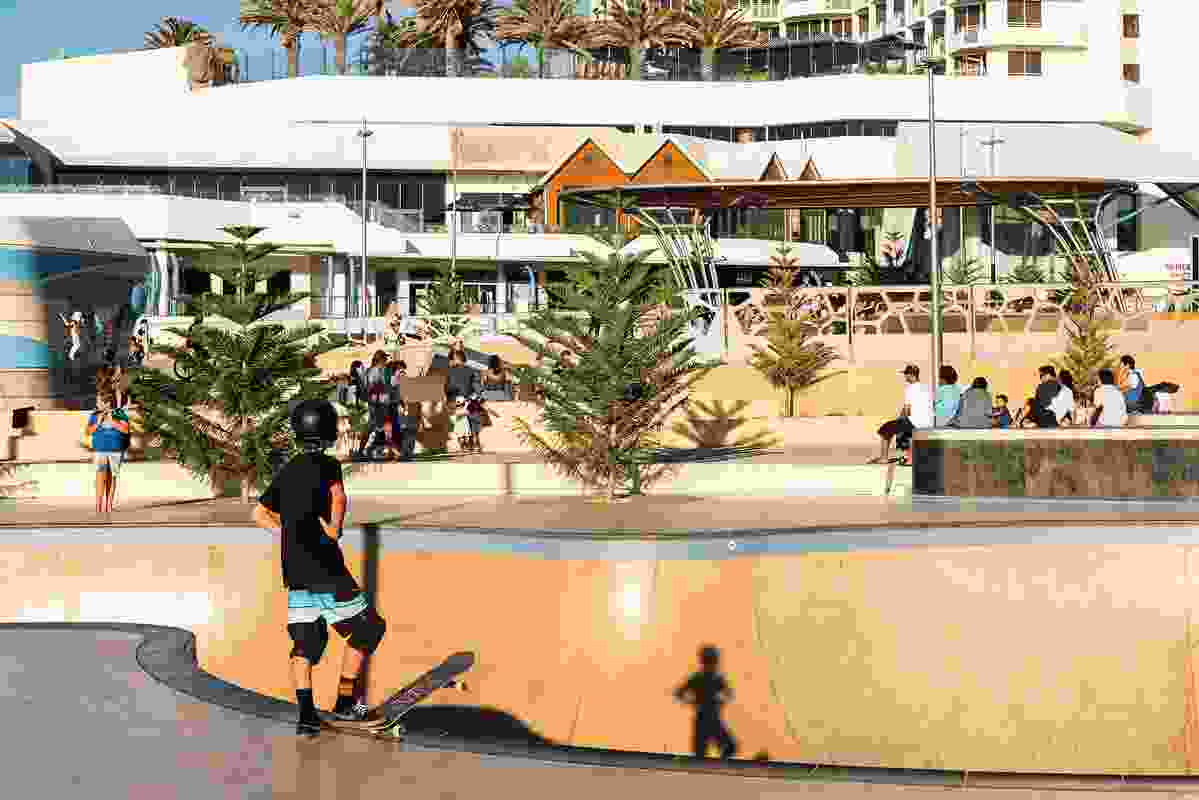 Skaters embrace the challenging terrain of the new skatepark and bouldering space, designed by Enlocus. 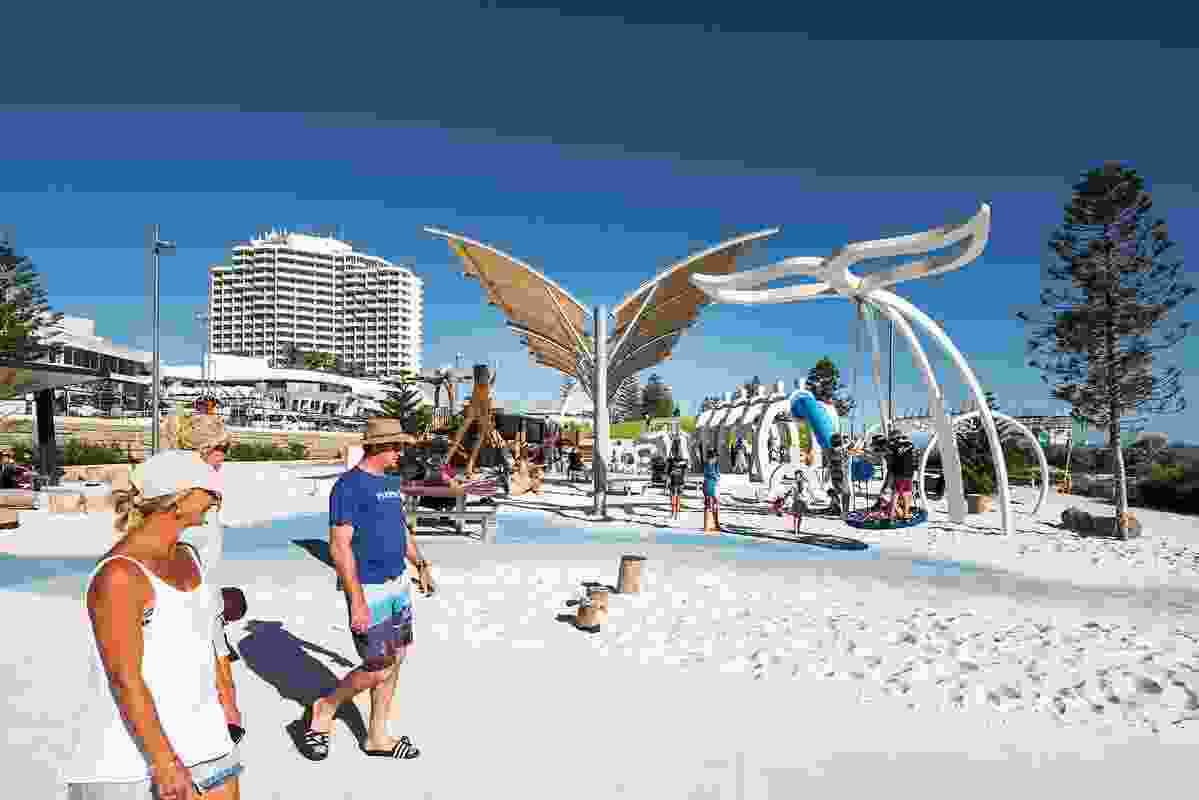 The Whale Playground engages visitors and children with Whadjuk Noongar Dreaming stories of spirits returning to the land after death.