The Malvolio Road reserve site in Coolbellup, WA in December 2016 (left), and again in March 2017 (right) after it was cleared to make way for the Perth Freight Link.

It’s March 12th, the morning after the 2017 Western Australian state election. Under a heavy grey sky I am walking along a wide tract of pale yellowish sand dotted with piles of reddish-brown mulch. Here and there between the broken sticks and tyre tracks there are lively bursts of green: grass tree leaves erupting from the sand; macrozamia unfurling to an ancient rhythm; the precocious red stems of marri shoots outstretched toward their former height.

Only two months ago this was a thriving expanse of urban bushland. Southern brown bandicoots, black cockatoos and innumerable reptiles lived in and among the marri, banksia and woody pears. A community watched in horror and anguish as it was bulldozed to make way for a road that will not now be built.

The extension of Roe Highway, locally known as Roe 8, had been part of Perth’s transport planning since 1955 but became redundant as the city evolved. After an extensive and open consultation process, a 2002 review recommended against its construction.

Roe 8 was called back into service in 2014 by then-Prime Minister Tony Abbott’s ‘Perth Freight Link’: a toll road connecting the Great Northern Highway with Fremantle port. It was unclear how Roe 8 would connect to the port, but 1.2 billion dollars of federal funding were on offer so federal Department of Infrastructure and state Main Roads staff scrambled to assemble data for the provisional business case that was rushed to Infrastructure Australia.

Road developments in Perth’s southern suburbs were no stranger to controversy. In 1984 people protesting the extension of Farrington Road through the wetlands just north of the Roe 8 alignment were rammed by a bulldozer, arrested and nearly set on fire. Some of the veterans of that struggle have been trying to protect the remaining wetlands ever since. As Roe 8 proceeded, they were joined by more than 10,000 people from all walks of life.

In 1955 it was untroubling that the road would bisect the Beeliar wetlands, part of a chain of lakes along the Swan coastal plain. By the early 21st century, however, the ecological and social value of the wetlands and adjacent woodlands, and the risks associated with development, had become abundantly clear. The Western Australian Environmental Protection Authority (EPA) in 2003 said that Roe 8 would be ‘extremely difficult to be made environmentally acceptable’ and that ‘every effort should be made to avoid’ construction of the road through Beeliar Regional Park.

After Tony Abbott’s ‘captain’s pick’ on the road, one by one, environmental and heritage safeguards failed. Two Aboriginal heritage sites in the path of the road were de-registered in 2014 after a cursory investigation. The Aboriginal Cultural Materials Committee rejected approval for the road in 2013, but then granted it in 2015. The EPA granted approval for the project in 2015 but this was overturned in court then reinstated on appeal, in a case that demonstrated that the EPA wasn’t legally obliged to follow its own policies. A subsequent Federal Court challenge showed that the Federal Environment Minister was not legally obliged to consider evidence that Ministerial conditions were not met.

In early January 2017, WA Labor Party leader Mark McGowan declared that if his party won the March 2017 election, the Perth Freight Link would be scrapped. Shortly after, just two months out from the election, clearing began in earnest. Stony-faced police held back distressed men, women and children as the woody pears, marri, trees that had withstood countless harsh summers shuddered and fell before the bulldozer, then were pushed into unceremonious heaps. Grasstrees withstand transplanting well and a small industry has grown up around relocating these plants to gardens from land cleared for housing. In the rush to clear as much land as possible before the election, everything was mulched. Lock-ons, treesits and mass actions achieved some delays, but contractors began working on weekends to make up for lost time.

After the Liberal Party’s resounding electoral defeat, the community that has grown around resistance to this folly looks forward to beginning the work of replanting and restoring. A community wildlife corridor along the old Roe Highway reserve represents a new, greener vision for urban land use. The damage to Aboriginal spiritual and heritage sites may be irreparable, and the two towering Norfolk Island pines planted by Bibra Lake farmer John Dixon on his wedding day in about 1900 can never be replaced. But already the lignotubers are resprouting. The bush is tenacious and with stewardship, it can return.

This article was originally published in Australian Garden History, volume 28 no 4, April 2017. 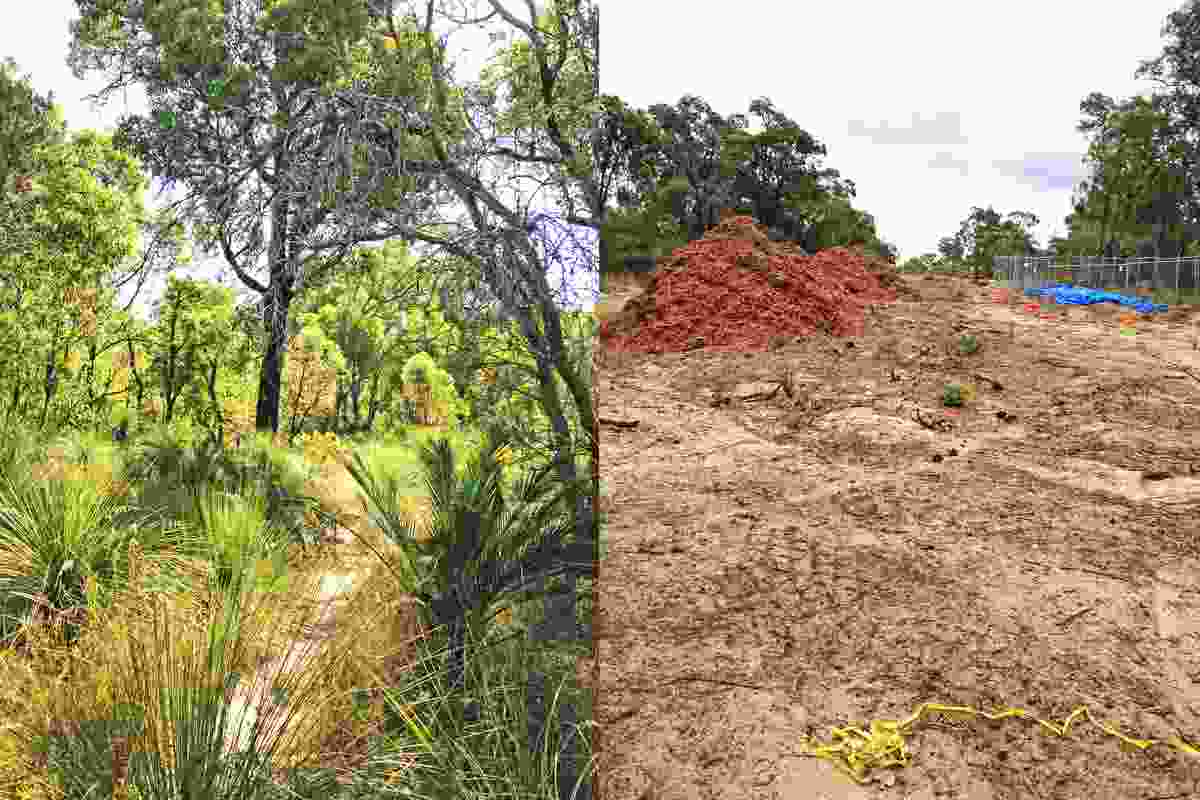 The Malvolio Road reserve site in Coolbellup, WA in December 2016 (left), and again in March 2017 (right) after it was cleared to make way for the Perth Freight Link.