Refuge City, a new kind of city for our times

A visualisation of a Refuge City street scene.

Australia is one of the most successful multicultural societies in the world. Nonetheless, in recent times many Australians have come to regard population growth, and particularly immigration, as a problem – at best – to be solved. In contrast, we believe population growth and migration present a creative opportunity to shape new Australian cities unlike any we have built to date.

In a globalised economy where technology has prevailed over geography, Australians are natural global citizens. However, all is not well in multicultural Australia. Recent and credible polling indicates that 64% of Australians think the level of immigration over the past decade has been too high – up from 50% in 2016.

We believe such opinions (in part) stem from entrenched migration patterns. Currently 90% of new arrivals settle in Sydney or Melbourne where they compound housing affordability and congestion issues, among others. Migrants from overseas are the main contributors to both cities’ populations growing by over 100,000 people each year.

In response to these issues, the Morrison government is considering a plan requiring some new migrants, including refugees, to settle for up to five years in regional areas.

However, there are limits to this approach. Voting patterns indicate Australians in regional Australia are also often resistant to increased migration. Moreover, the mechanisation and automation of farming mean that jobs are often scarce.

So what can Australia do?

Australia will need more drastic solutions over the longer term. Refugees now number over 25 million people worldwide. Due to climate change alone a deluge of refugees is predicted by 2050, particularly in Asia – 144 million in China, 63 million in India and 62 million in Bangladesh.

In the face of this, demographer Bernard Salt asks:

“What does Australia do? Board and turn back every boat? Leave the refugees without support on the Kimberley coast? Plan to help as many as we can and then hope we can ship back tens of thousands of people?”

Clearly, Australia will need a plan to deal with this situation, particularly given the panic over the arrival of small numbers of “boat people” and the Coalition government reducing immigration to the lowest level in more than a decade. We could bemoan a lack of support for increased immigration in Australia, or instead bear this resistance in mind and try to find a creative (part) solution.

This is where our Refuge City model is potentially instructive. As Robert Wiblin has urged in the past:

“If Australians are not so enthusiastic about sharing their good luck with refugees [and migrants], a charter city administered by Australia will at least allow them access to the governmental and legal institutions which have served Australia so well.”

In line with this sentiment, we have designed an urban model for a bustling, multicultural and entrepreneurial metropolis located on Australia’s northern coast which would run under its own charter. Such a city would provide refuge and opportunity for many migrants, above and beyond what Australia already accepts through its humanitarian migration program.

A city of cities on the north coast

Why the northern coast? We selected this area because it has many advantages, such as proximity to rapidly growing Indonesia, availability of mineral and energy resources, and – in the case of the Northern Territory – Commonwealth control of land. This is important because it gives the federal government full legislative power to create a charter city unconstrained by opposition from the states.

Refuge City would comprise dense, car-phobic and adaptable urban neighbourhoods (of up to 32,000 people) based partly on migrant ethnicities – forming a city of cities, rather than a monolithic mass of urbanism.

As required, this form would enable different cultural groups to follow many of their own cultural practices and develop a measure of self sufficiency. The design of these neighbourhoods would be developed with the communities and would reference – within limits – the urban traditions of the residents’ home countries so to provide a “home away from home”.

Rather than the cultural model of the “melting pot” – which is under assault in many cities of the world – these urban neighbourhoods would cradle islands of relative cultural specificity yet maintain an overall cultural diversity. Natural areas, recreational open spaces and schools would provide crucial interstitial spaces between the urban islands and their respective communities. Moreover, an integrated bus system and a wide distribution of jobs would also stimulate interactions between communities. This will moderate the cultural specificity of the urban islands over time.

Like other charter cities such as Shenzen, an independent government would govern the city, running it with respect to a specific charter. The autonomous government will incorporate an alliance of representatives from Australia’s federal and territory governments and potentially other countries within the Asia-Pacific region and beyond.

The charter’s terms, which will define the city’s operation, include a much lower personal and company tax regime than elsewhere in Australia, to stimulate investment and jobs. Businesses would pay workers the Australian minimum wage but would not otherwise offer award wages or conditions. Complementing this will be a basic but liveable social security, housing, education and primary health care system.

On arrival, migrants would receive a temporary visa. They would be able to apply for a skilled migration visa if they gain marketable skills from the city’s trade schools and university campuses, or a permanent business visa if they establish a successful business (both business and education would be conducted in English).

Moreover the city would avoid the need for mandatory offshore detention of arrivals by boat, which the UN Human Rights Council has condemned as a “massive abuse” of migrants. This has in turn profoundly damaged Australia’s moral authority globally. Despite our tarnished reputation, Australian residents would be welcome in Refuge City, whether as students attending global university hubs, starting a business, or enjoying the city’s bustling diversity while on a weekend getaway. Conversely, Refuge City residents would also be able to visit other Australian cities, and in particular Darwin.

Through a leasehold model, Indigenous landholders would maintain ownership of Refuge City land and gain a sustainable and substantial rental income from it. This is not unprecedented. Canberra embodies a similar system, with all land leased to “owners” as a Crown lease.

Moreover, given Indigenous culture’s continuing ownership and intimate knowledge of the land, we would develop the Refuge City designs with land councils. Without such sincere engagement, traditional owners would rightly veto new city development under the Aboriginal Land Rights (Northern Territory) Act 1976.

Through our Refuge City model Australians could aid many more refugees than they would otherwise accept as fully fledged immigrants to the existing cities. In so doing, we could make Australia the world’s great 21st-century refuge.

Refuge City, a new kind of city for our times 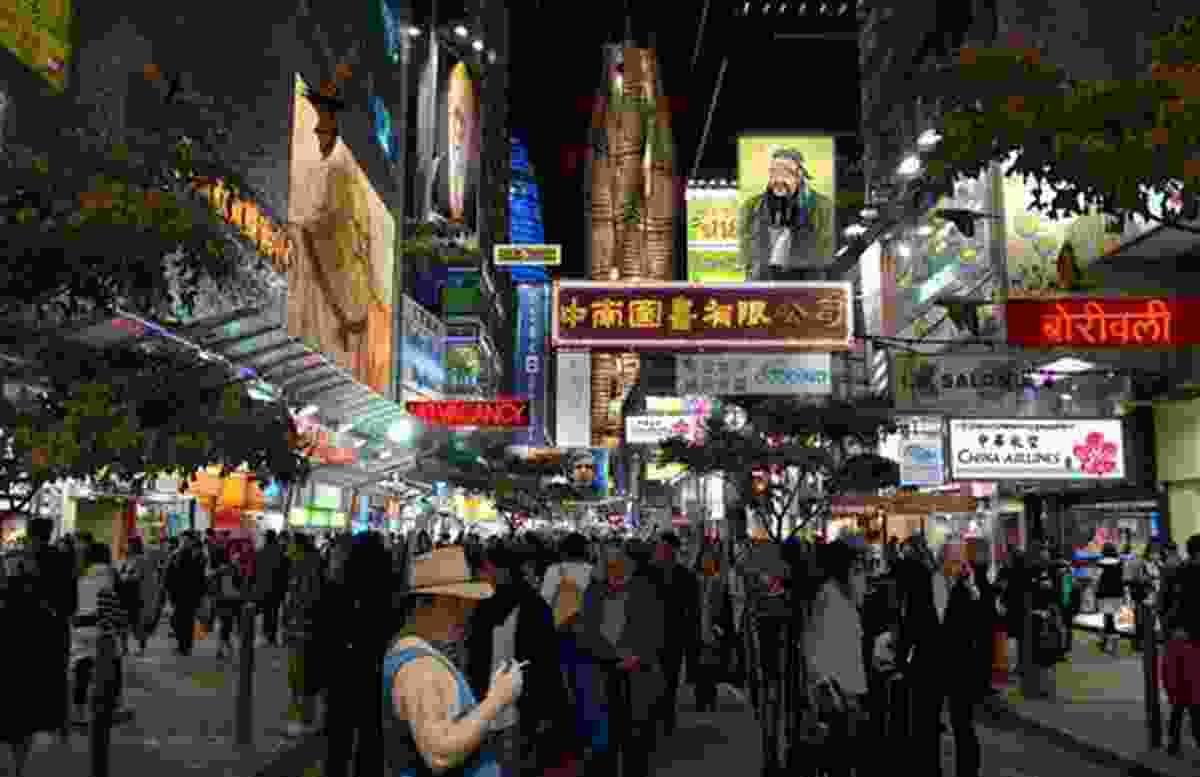 A visualisation of a Refuge City street scene. 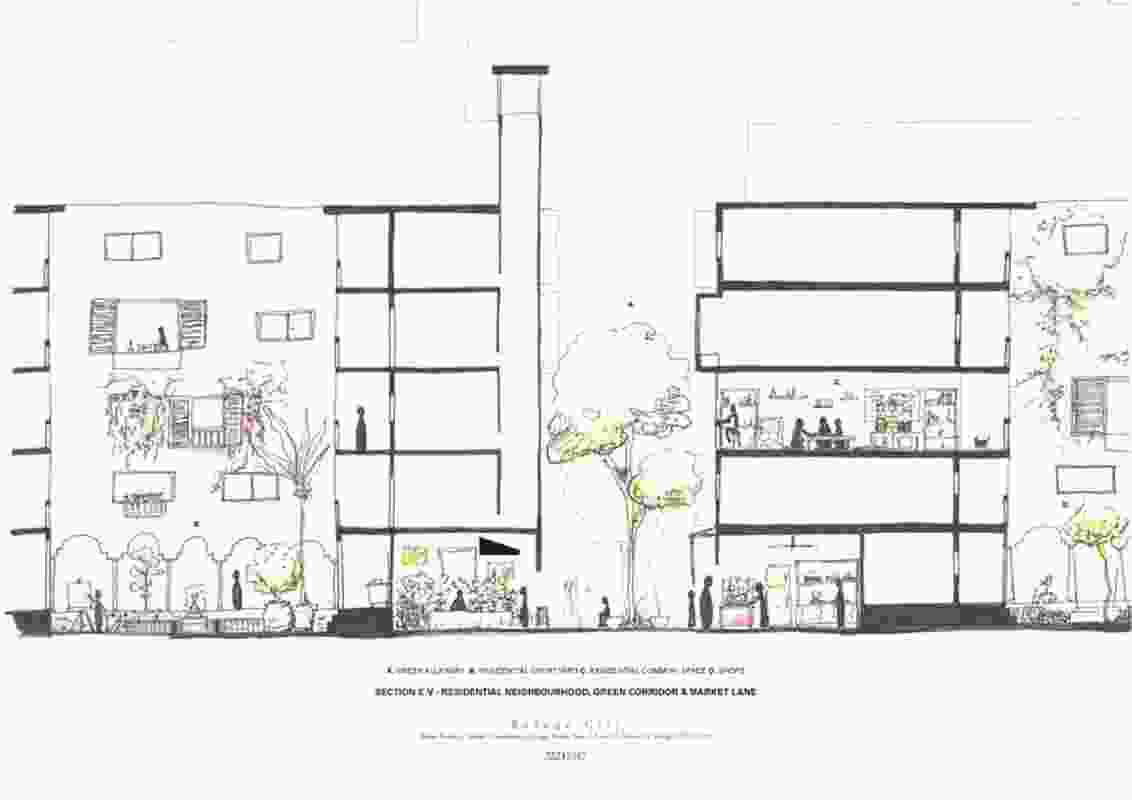 A cross-section view of a Refuge City neighbourhood. 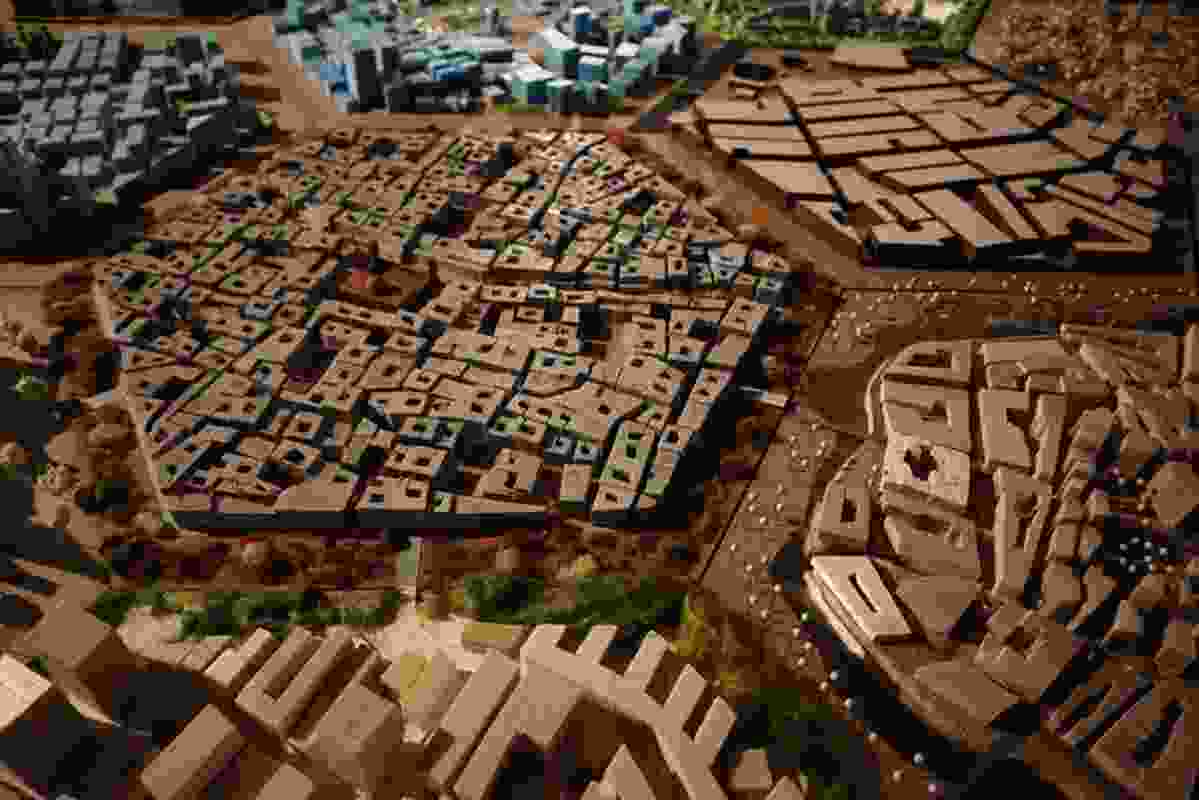 The design of each city neighbourhood will reference the urban traditions of the residents’ home countries. 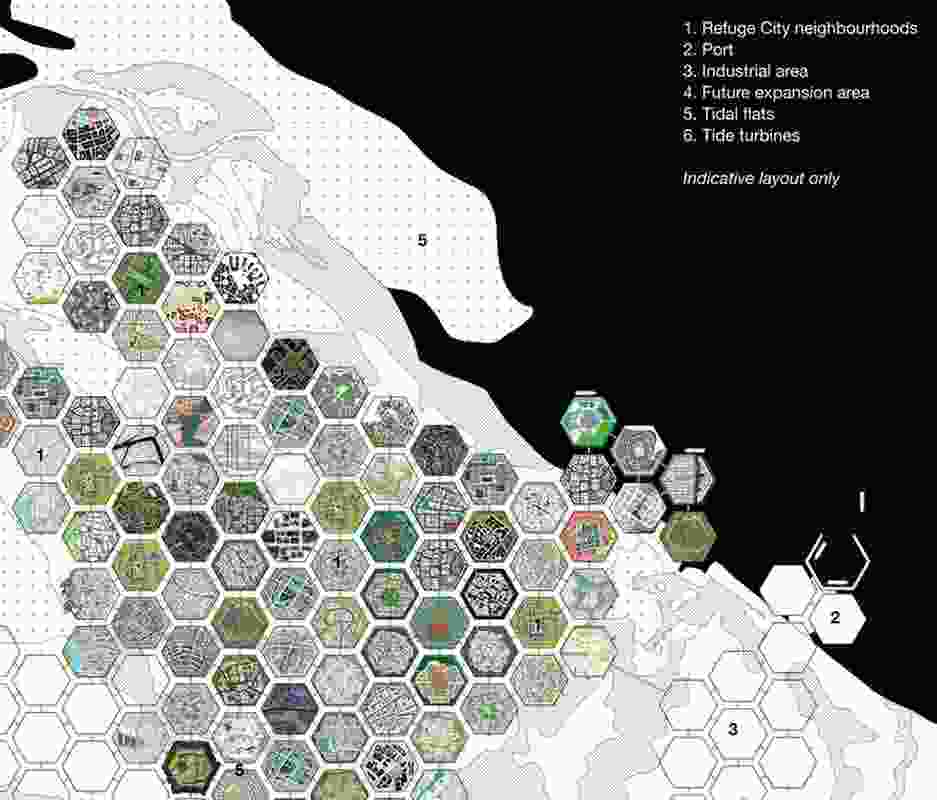 An indicative plan for Refuge City. 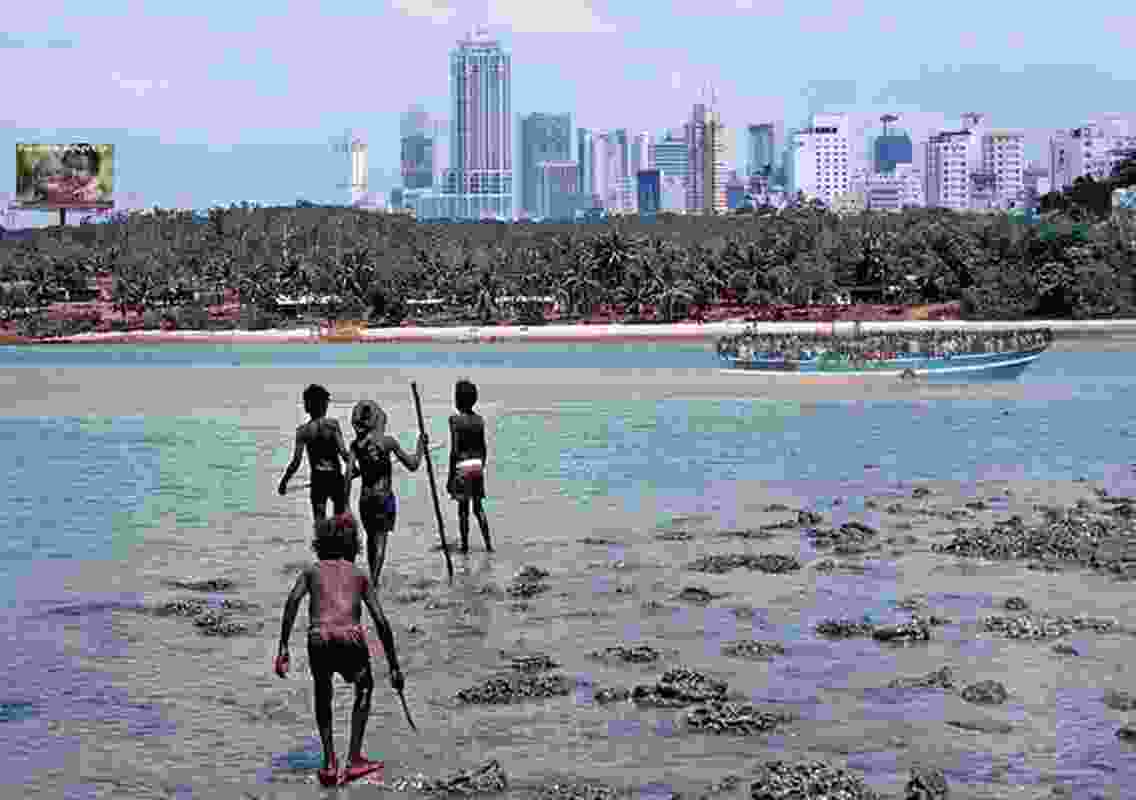 Image: By Julian Bolleter based on a photo by Ludo Kuipers, Author provided 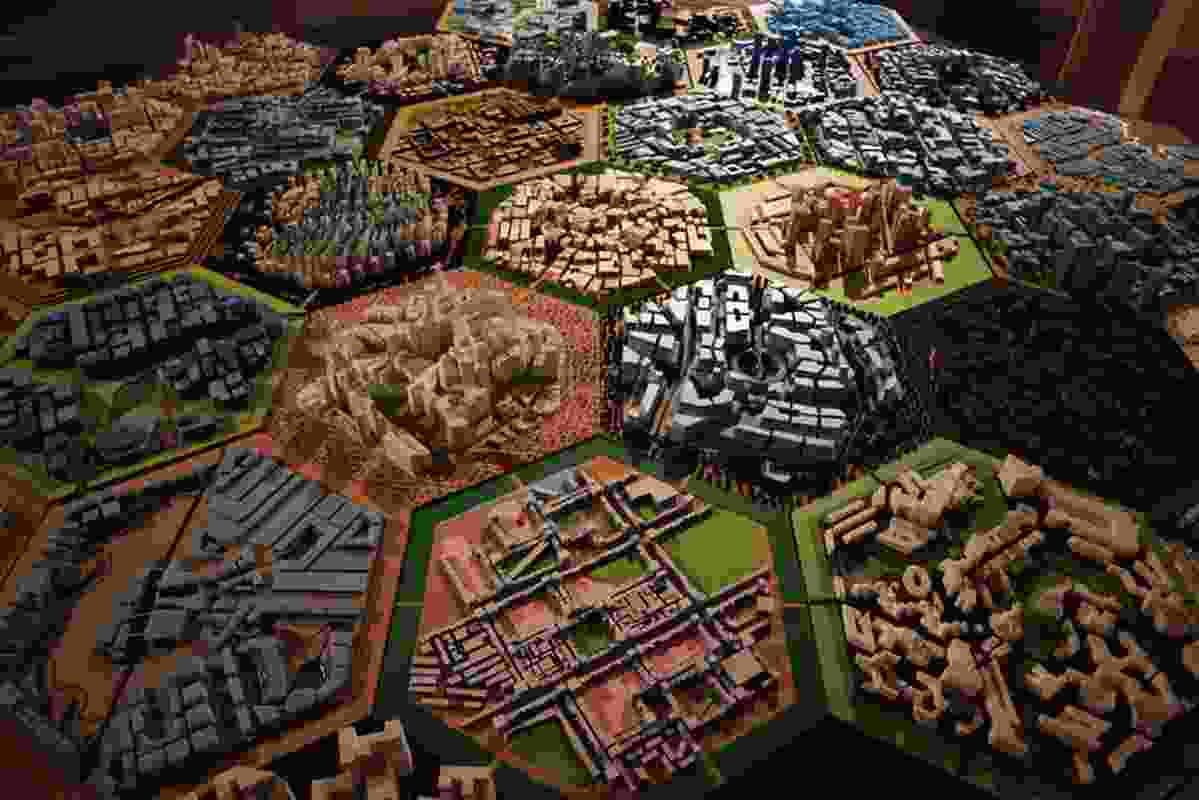 A city of cities: a model of the proposed Refuge City.