In the 1990s, prior to the ubiquity of the internet and with few built “design” projects in Australia as exemplars, being interested in design was a lonely affair. In drawings and physical collages – literally, a virtual reality – one projected qualities of landscapes that required one to imagine what might be from a re-presentation of what was in the real landscape. Books and magazines that made it to Oz (in boutique bookshops, now long gone) were voraciously sought and shared, then photographed for slides to use in university lectures. Publications from Europe were most sought after. After the Catalan journal Quaderns d’arquitectura i urbanisme and the French journal, Pages Paysages, my most valued book of the time, as both a new studio teacher and landscape architect, was Kienast: Gärten = gardens (Birkhäuser, 1997) about the work of Swiss landscape architect Dieter Kienast. I was fascinated by undefinable qualities that I felt, as much as saw, in the work of Zurich-based practice Kienast Vogt Partner – work that was produced by Kienast in collaboration with another Swiss landscape architect, Gunther Vogt. Twenty years before today’s Instagram filters could automate the process, in both this book, as well as the work of the two subsequent volumes in the series published after Kienast’s death in 1998 – Kienast Vogt: Aussenräume = open spaces (Birkhäuser, 2000) and Kienast Vogt: Parks und Friedhöfe = parks and cemeteries (Birkhäuser, 2002) – exquisite black and white photographs and beautifully collaged plans demonstrated a sensitivity to the materiality of landscape that was then mobilized as a sensibility in Kienast Vogt’s design projects. Although the practice’s work during Kienast’s time often had an “esoteric” aspect (that I rather liked), such as their use of literal text in their “Et in arcadia ego” (I too live in arcadia) garden project, Kienast Vogt’s aesthetic was in stark, indeed austere, contrast with the dominant postmodern language of landscape architecture that was popular in English-speaking countries at the time. Working consistently with some of the most celebrated architects of the time, including Herzog and de Meuron, using simply grass, concrete, trees and steel edging, Vogt Landscape Architects (VLA) (as they became in 2000) demonstrated a deep understanding of landscape that presented the kind of all-encompassing approach that architects appreciated in the work of Bauhaus architect Mies van der Rohe.

While such a sensitivity comprised an aesthetic of landscape that was felt rather than easily articulated in words, in two volumes Miniature and Panorama (Lars Müller, 2008) and Distance and Engagement (by Alice Foxley, Lars Müller, 2010), the design development of selected projects was curated to demonstrate in-depth research into how qualities emerged from materials, embedded in cultural/aesthetic modes from the nineteenth century such as geology and miniature landscapes. These books had a definite impact on my own research. A common strategy today, VLA’s reconceptualization of the planting palette in relation to growth and seasonality in their design for Home of FIFA in Zurich (2006) influenced the arguments developed in my 2018 book Overgrown. And the exploration of geomorphology in making rammed-earth retaining walls at VLA’s Novartis Campus in Basel (2016) was a precedent for my PhD, Novelty in the Entropic Landscape.

In the same way that the black and white pictures by photographer Christian Vogt (no relation) did in the previous volumes, representation in these later books is the key tool for mobilizing the qualities discovered in VLA’s research for design. The shaping of these representations becomes an analogy for the way that landscapes are shaped. At the 2019 International Festival of Landscape Architecture: The Square and the Park, Vogt discussed the idea of landscape “models without numbers.” At a time when big data and performance metrics are driving much design decision-making, particularly on the client side, as cases for funding have to be made, Vogt’s work is an important reminder. When a representation is crafted as a model, its “model-ness” is ever present, it cannot be mistaken for the real thing, since it is patently not. As digital simulations and universal principles become ubiquitous, the notion of the “model without numbers” reminds us that in the case of a simulation, the “site” is really the digital model itself, not the real landscape it seeks to represent.

Despite being known for their design work (featured regularly on international design blogs), I was surprised when Vogt noted, during an interview I conducted with him: “Architects want a design too quickly.” While the word “design” comes from the Italian word disgeno, which is synonymous with drawing, I argued in Overgrown for an understanding of design as a type of judgement with an emphasis on formal/spatial proposition, in order to detach it from conventions like the plan. Arguing that the “profession is not intellectual enough,” Vogt noted, “Olmsted didn’t draw at all,” instead, he talked and did agriculture.

As a research practice – and when working with architects and particularly artists like Danish-Icelandic artist Olafur Eliasson – VLA are more like representatives of landscape, acting to explicate and translate the “nature” that features in their collaborator’s work. Listening to Vogt, this can seem like a mission, a calling, certainly an acuity, and is an approach that sits in contrast to the stubborn pursuit of individual vision that is common in the Ayn Rand model of the architect. This is despite the dominant outcomes of VLA’s research work manifesting as formal propositions, not disinterested science. Rather than nature as algorithm, VLA proposes a knowledge of landscape as experienced, a return to the original definition of the empirical.

Vogt comments, although he has no particular nostalgia for drawing: “If graduates are just going to be working on the computer, why wouldn’t they do commerce for better money?” He described a series of teaching and learning workshops the ETH Zurich had been taking to renew their Master in Landscape Architecture curriculum, the most interesting of which for him was about the natural sciences. The main outcome from it was that the program now plans to spend a large part of its contact time in the field. This reminded me of a field trip I ran at the University of Virginia in 2012, where I refused to tell the students where they were going, but that they needed to bring field gear. When we arrived at the street immediately outside their architecture building I told them, “We are here.” While risk-averse universities are making it more and more difficult to go into the field, in fact, many lessons of landscape architecture can be learnt, simply by observing the real landscape. These observations can then be simplified – rarefied, abstracted – into design, something I learned from my mentor at RMIT, Peter Connolly.

Such an engagement with the real, physical landscape, beyond models, presents a key way that landscape architecture might attract more applicants, as a type of design deeply embedded in the world and its systems. “Landscape architecture,” says Vogt, “is applied explanation.” 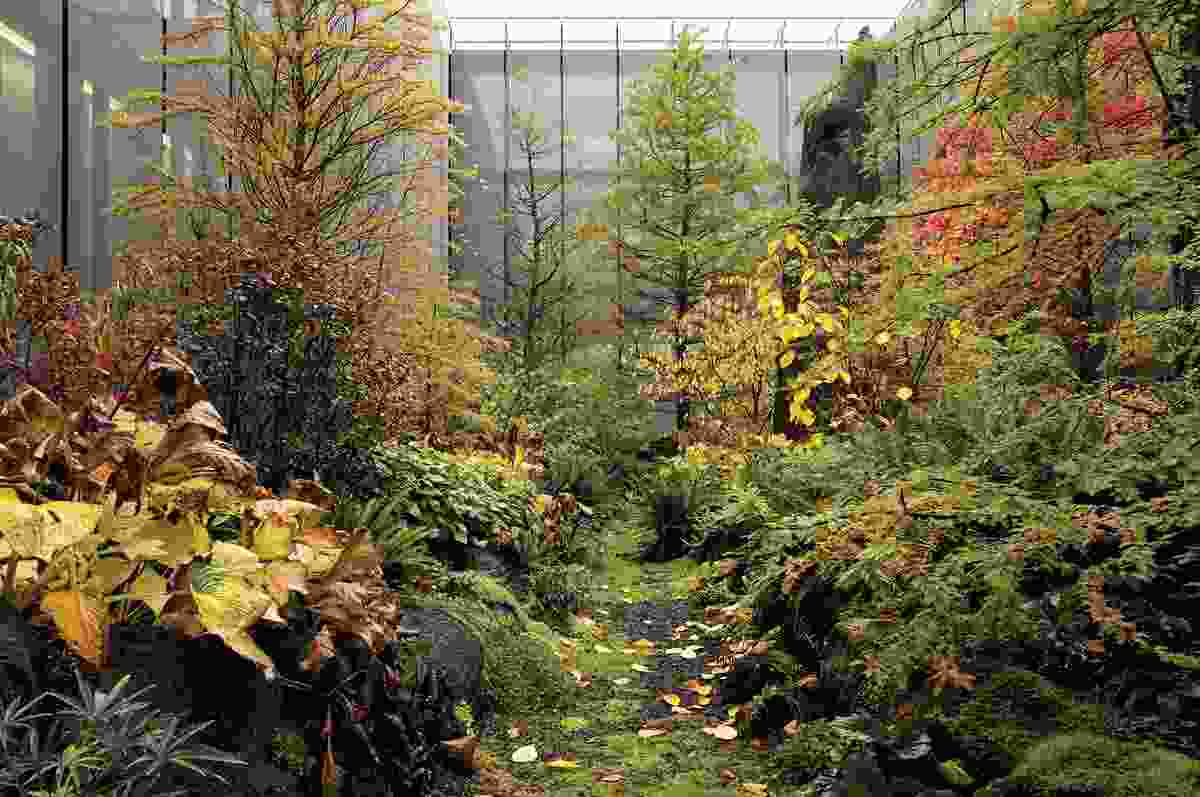 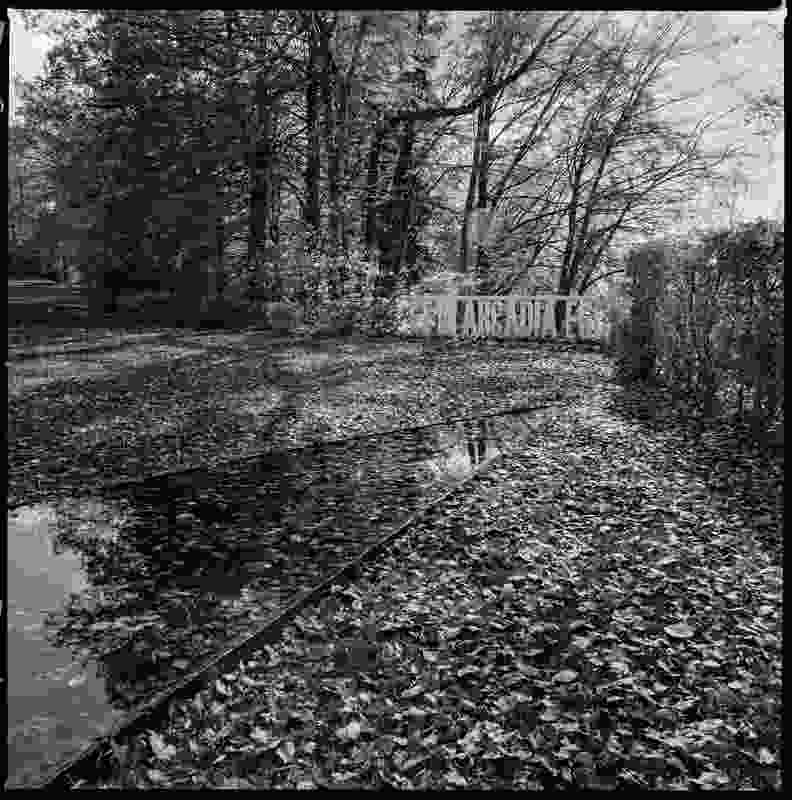 At “Et in arcadia ego,” a concrete balustrade of literal text frames a view over the area’s alpine surrounds. 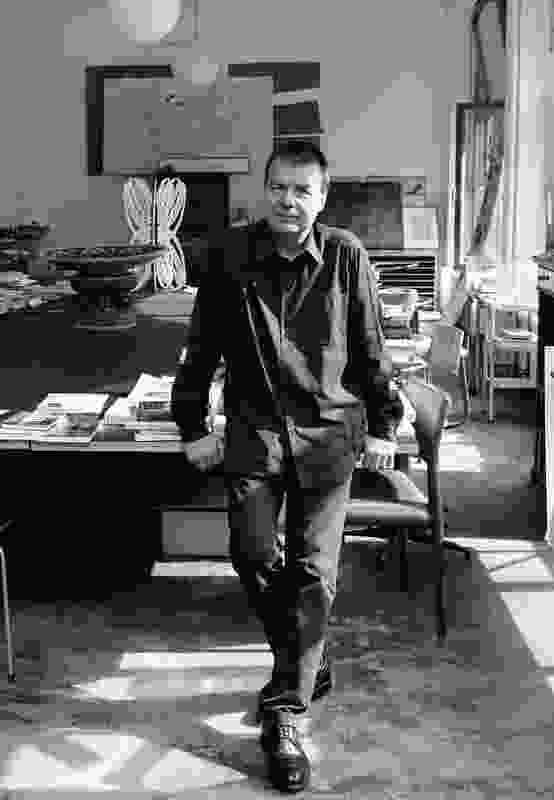 Gunther Vogt, founder of Vogt Landscape Architects, in Zürich. The studio has additional offices in Berlin, London and Paris.