In 2019, mass plantings at Rosny Park continue to define the wild edge, dianellas have self-replicated in the understory to the left and to the right Callistemon pallidus and dianellas cluster together to deter weeds.

In 1986, I was working for Scott and Furphy Consulting Group in Hobart as a “senior” landscape architect. I was new to Tasmania, not long out of university. At the time, Tasmanian landscape architects struggled to extend their purview beyond putting “rouge on the corpse.” Our palette of working materials was limited, plantings were a mix of exotics and “natives” and everything was hand-drawn and calculated by hand. Architects set the agenda and engineers ran the show. Nevertheless, I was excited to be landscape architect for a new “integrated development” proposed by the then Tasmanian Department of Construction (TDC) that sought to combine existing government offices for Housing Tasmania with a new branch of the State Library of Tasmania, all set within 1.3 hectares of green open space on Hobart’s eastern shore.

The site for the development, known as Rosny Park, was surrounded by regionally important nature reserves and bounded by the Kangaroo Bay Rivulet, with government offices for the Mines Department to the east, the Clarence City Council’s chambers to the west and the police offices lining the remaining edge. The area’s main indoor shopping centre is adjacent. In the architect’s vision for the development produced by the TDC, all proposed elements fit neatly within the site boundary. The plan suggests that one drives to the development, walks through a car park, finds the front door and goes to work or the library. Absent is any suggestion that one might arrive by foot or traverse the site to go elsewhere.

By comparison, in developing Scott and Furphy Consulting Group’s 1986 proposal for Rosny Park, I saw an opportunity to link the development to its adjoining sites through the creation of a tree-lined pedestrian spine. The spine would facilitate access to the library’s two levels and enable workers to walk between the various neighbouring government offices and the library, while separated from vehicles.

At the time we were developing the design, I was an indigenous plant fanatic; however, this was in tension with European influences in the Tasmanian landscape and my immigrant botanical roots. From this personal dilemma emerged the concept of the “wild” exterior and “cultured” core, a strategy that situated ornamental and/or edible plant species closer to the buildings on site, with species indigenous to the immediate region further afield.

The value of the suburban “wild” in this context was twofold. Ecologically, sites provide habitat for urban-adapted native fauna and havens for avian visitors. Aesthetically, the “wild” edge blends visually with the surrounding landscape; the development becomes one with its surrounds. In this project, the “wild” also had precedent-setting value, with the interest in indigenous species catching on in the Tasmanian nursery industry and among local governments. Close to the site, the project inspired the Clarence City Council to make plans for the rehabilitation of the nearby Kangaroo Bay Rivulet corridor.

With this as context, I come to academic Julian Raxworthy’s 2018 book Overgrown and its exploration of the tension between design intent and the influence of maintenance – a factor often beyond a designer’s control – on a project’s ongoing expression. While Overgrown gives language to this phenomenon, I have long been alert to these tensions, with a twenty-year background in estate maintenance and landscape construction. This awareness, later coupled with professional experiences that revealed “there are no votes in maintenance,” has influenced my development of a landscape architectural practice that concentrates on creating “maintenance-rational” landscapes – settings that can be cared for with simple, infrequent strokes.

Techniques of maintenance-rational gardening include: deep mulching and mass plantings; the use of plant species that will assume a desired shape in the site’s conditions without pruning; the use of maintenance strips to reduce trimming; minimizing lawn-to-pavement edge ratios; spacing trees in lawn generously to facilitate gang mowing; and the use of self-replicating plants that spread naturally. Despite the use of all of these techniques at Rosny Park, long-term government maintenance has meant the lawns are poor and plants that have needed replacing have often been replanted with species not suited to the “wild” exterior.

Gardeners are not alone in affecting project outcomes in the long-term. Bureaucrats also exert their influence on public spaces. For instance, the park’s original timber love seats (fabricated by local carpenter, Trevor Cowell) have since been replaced by metal benches – the idea of sitting retained, but the quality of the experience much diminished. More recently, in the past decade, a sculpture has appeared on the lawn – the work screams “climb me,” yet no such climbing is allowed, so the sign declares. Beyond gardeners and bureaucrats, users also influence how a project’s form evolves over time.

Nonetheless, the conceptual framework of the project still persists today. The original avenues of Malus ioensis ‘Plena’ (crab apples) remain much-loved features1 and the connections between the park and its surrounds continue to be well-used. The wild perimeter and cultured core are evident. Viewed through the lens of Raxworthy’s thesis, Rosny Park is a demonstration of the significant and often understated role of the gardener in curating the landscape architect’s vision.

1. Through a quirk of maintenance, a prickly box has been allowed to establish at the crab apple avenue entry. On commenting to my offsider that it should be removed, his response was, “but what about its perfume and the native bees?” A suggestion that the use of indigenous species may finally be becoming the norm. 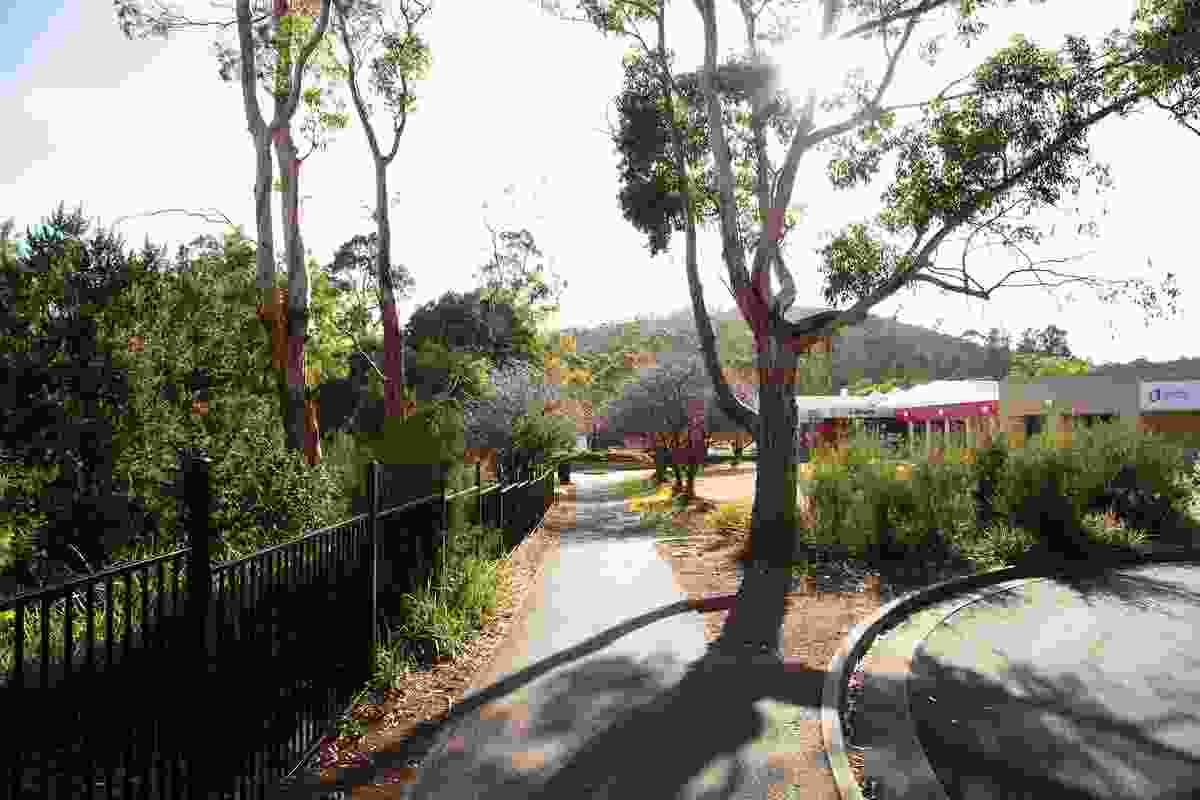 In 2019, mass plantings at Rosny Park continue to define the wild edge, dianellas have self-replicated in the understory to the left and to the right Callistemon pallidus and dianellas cluster together to deter weeds. 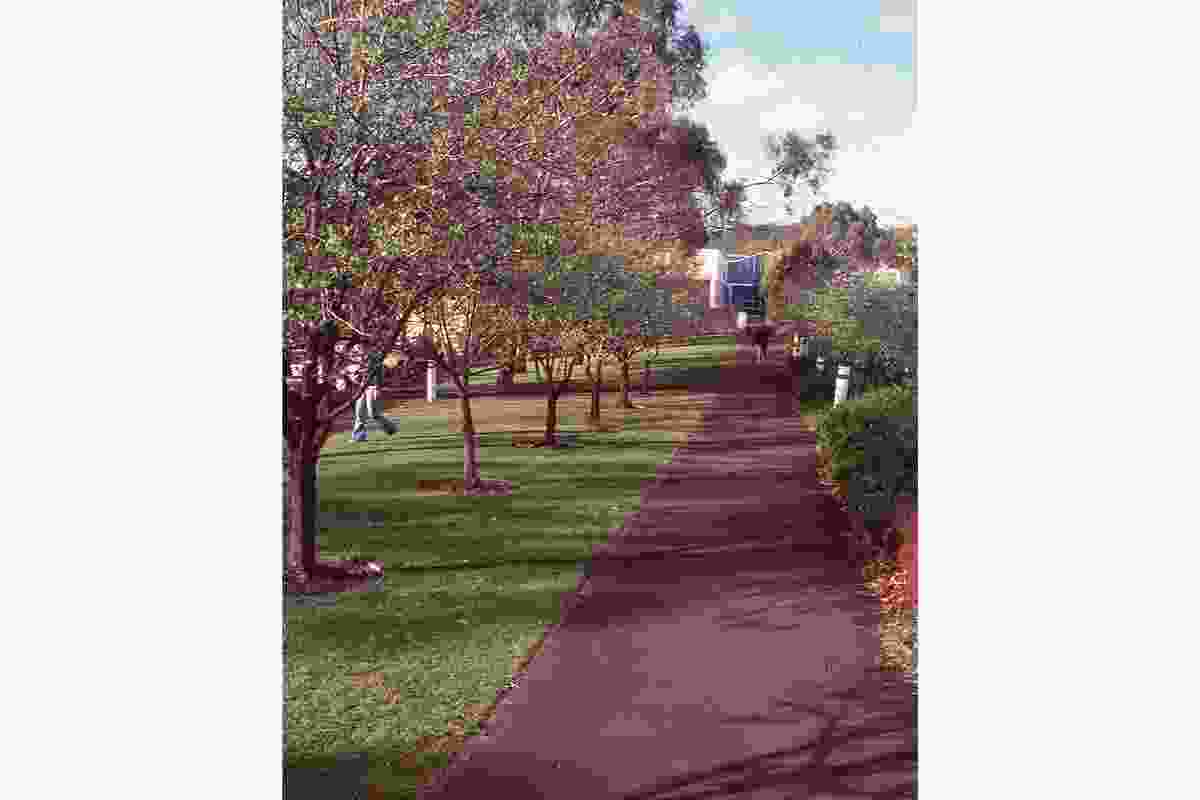 A 1993 view along the crab apple tree-lined pedestrian spine of Rosny Park towards the library entry. 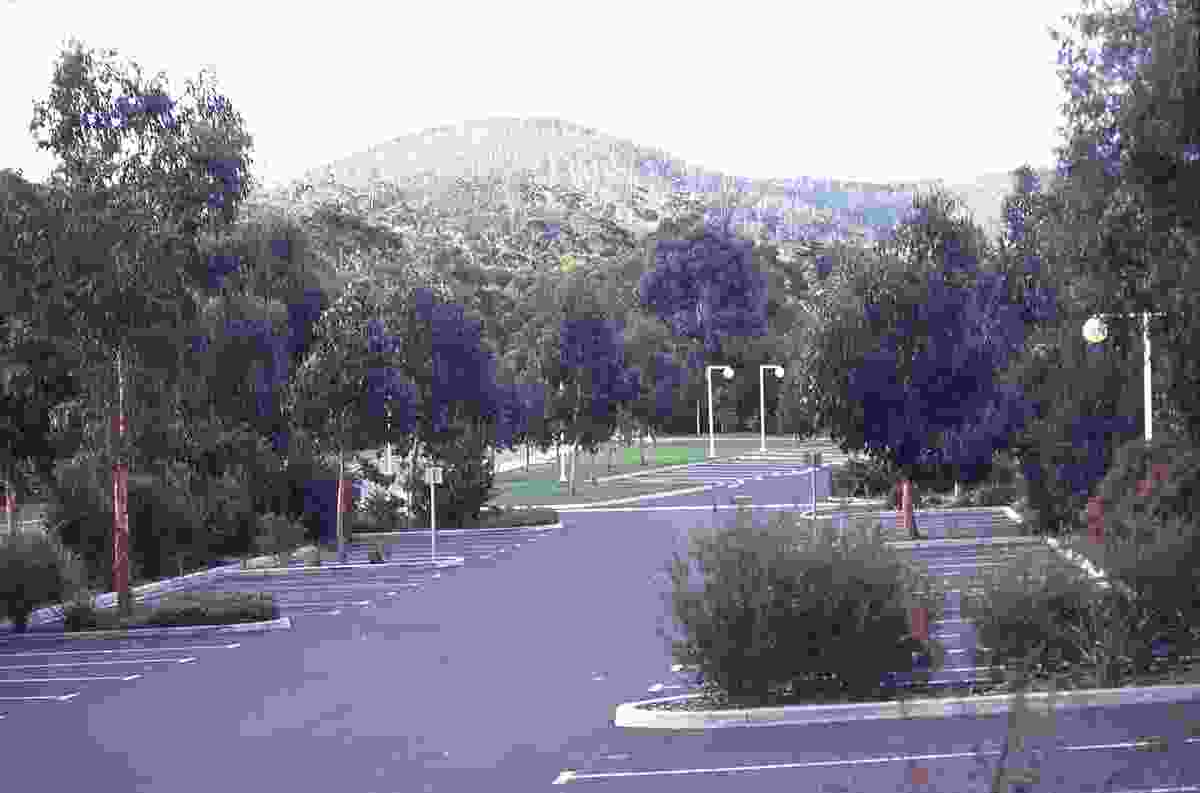 In 1993, the wild edge and the borrowed landscape blur the boundaries between site and surrounds.