Travellers arriving either by air or automobile to the Gold Coast will encounter a pair of gateways named Hi-Lights. A 2018 Commonwealth Games legacy project, these entry installations were designed by New York-based firm Lot-ek. These new additions to the Gold Coast landscape are a testament to sustainable luxury, in as much as garish light poles expressing sustainable values signal lampposts of progress. With Hi-Lights, commercial/industrial ready-made poles have been transformed into signs, distinguishable by way of their dual function from the surrounding simplistic street luminaires. When you drive by the two sites at opposite ends of the city, the distinctive bristle of the lampposts are unmissable during the day, resembling a flock of seagulls, and at night when they glimmer. The static freneticism of these posts-of-progress certainly demand attention.

The project was the outcome of an international design competition that attracted seventy entries. Lot-ek principals, Ada Tolla and Giuseppe Lignano, in association with Sydney-based practice Office Feuerman and global studio Urban Art Projects, won in 2017. Lot-ek’s idea, as evidenced in the plaque at the base of the “GC” gateway, was to “[rethink] the highway light poles as dots that form letters and words,” and “[up-cycle] readymade items to shift perception and create the extraordinary from the ordinary.” The installations were co-funded by the City of Gold Coast and the Queensland State Government.

The Gold Coast is often referred to Australia’s Las Vegas, but Australia’s sunbelt city is poised at our country’s edge, rather than inland. The Gold Coast is renowned as a sunburnt holiday mecca built around beach culture. In the late 1950s, the place became popular for its conspicuous peppering of hotels, motels and restaurants extending north and south of the strip city, and is in many ways, itself a large resort – or last resort for some. It has become one large extruded entertainment ground. Robin Boyd in The Australian Ugliness derogatorily dismissed the Gold Coast as “smothered with advertising.” The place’s imagery not only hints at Robert Venturi, Denise Scott Brown and Steven Izenour’s seminal 1972 book Learning from Las Vegas, but also American graphic artist Saul Steinberg’s image of the Motels and Highway of the American West produced in 1959. One can see flashes of Steinberg’s image of the fine, elegant font signage of intermittent light bulbs resonating abstractly within the Gold Coastinstallation.Fixed embers spell out initials and words that are attached to posts of various heights. Painted with licks of “Naples” yellow, Lot-ek’s structural texts encourage thinking while driving past them. Lignano says, they are “built for future generations.”

During my visit to the installations on the Gold Coast in March, I was invited to welcome Lot-ek architects at the newly rebranded Home of the Arts precinct to celebrate their garish highway artworks. The installations are well-integrated with the airport corner site as a welcome sign as well as with the highway medium strip, which shows the simplicity and elegant mundanity of the lamp posts. The paint on each pole that echoes the shape of each letter, and the white lights that reference international highways colour codes, are the colours most visible during smoky atmospheric conditions or when driving at night. Viewing them from the Pacific Motorway, this new territory of signs mirrors and replicates itself on the other side of the highway. While somewhat beguiling at first, the signs are vibrant.

Unreservedly, Lot-ek’s design harks back to Lina Bo Bardi’s unbuilt Anhangabau Toboga Valley project (1981) in Sao Paulo, Brazil. There, two elevated roads are held by branch-shaped steel supports, evoking tropical trees with asymmetrical trunks. Similarly, a lamp post, for Tolla, is “as commonplace material as a tree.” Steinberg, a friend of Bo Bardi, had an influence on architects and artists from the 1970s onward. Since her rediscovery in the 1990s internationally, Bo Bardi is now more influential today than ever before. Tolla cites Bo Bardi specifically as an inspirational influence in the art of upcycling industrial waste into buildings. Lot-ek, who are known for their innovative approach to producing provocatively cheap yet luxurious and sustainable creations, is concerned with making architecture through the reconfiguration and reassembly of existing heavy-duty forms and elements into landscape structures – an approach informed by Bo Bardi’s writings on “Industrial Art,” and “Technology and Art.”

Steinberg’s illustrations of urban waste, such as Trash (1986), in the form of letter towers, communicate a new direction to making and sustainability. Although Lot-ek had originally intended to reuse lamp posts for the Gold Coast project, this proved to be difficult economically. Instead, new spatial experiences have been carefully crafted here to permit onlookers the opportunity to explore “Hi-Lights,” as an exercise in the mundane, yet elegant.

Not even a month after they were installed, the new Yatala gateway has triggered controversy. Members of the local community have claimed the lamp posts pose a visual distraction because of their clustered configuration on the median strip. The Council of the City of Gold Coast is considering having the signs relocated after the Games. In my view the signs pose no problem as they are not advertising consumer products and also function as protective barriers for vehicles. Lot-ek’s dual-functional signs should be esteemed for their graceful industrial and technology-art design – sculptural lamp posts that operate as legible signs from a distance.

When viewed from a nearby petrol station at Yatala (famous for its 3D big pie on top of a post), the Hi-Lights installation is foregrounded by both the iconic McDonalds golden arches and fields of cows grazing. Lot-ek’s architectural responsibility is about the completion of their own “pies in the sky.” Hi-Lights is a gutsy attempt in digesting the heavy traffic off the highway. They are sensible billboards without the need for scaffolding backdrops (as in Hollywood). 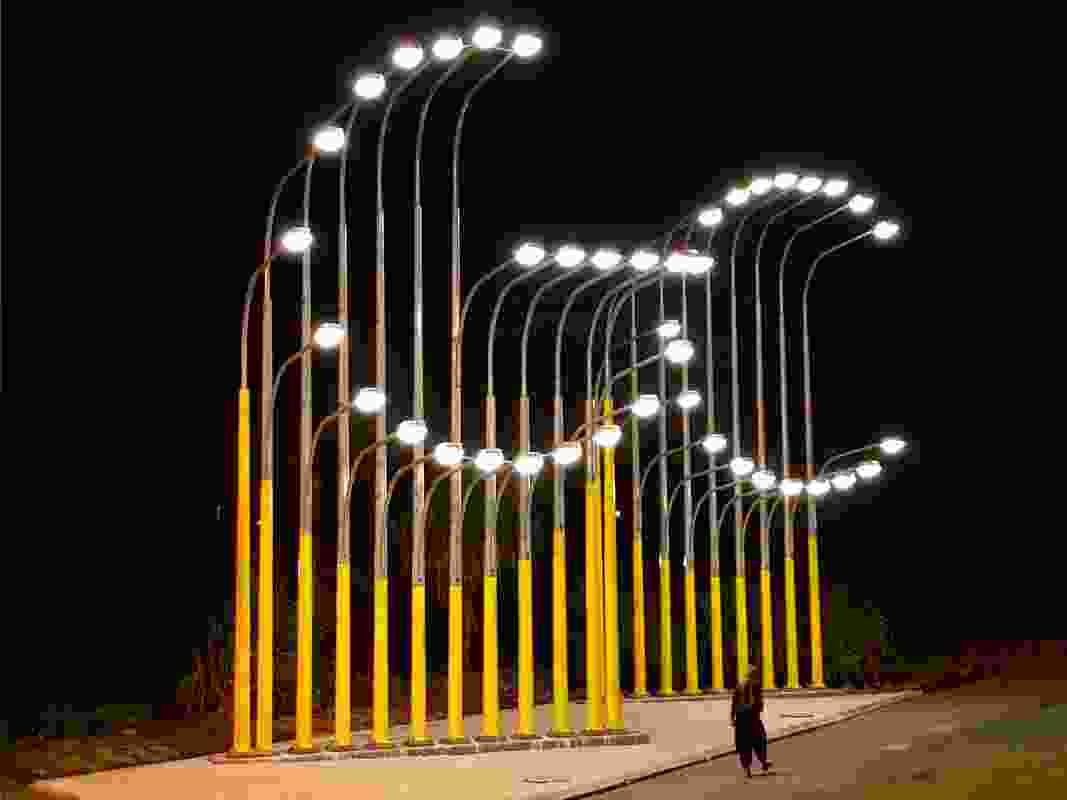 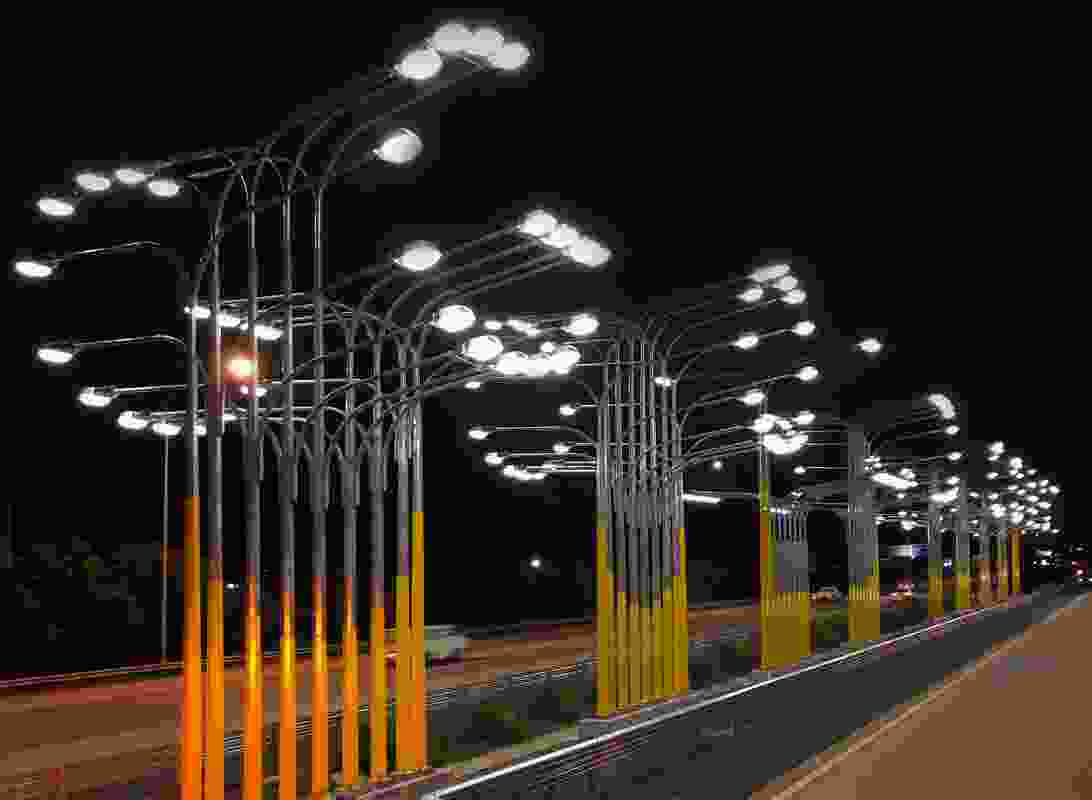 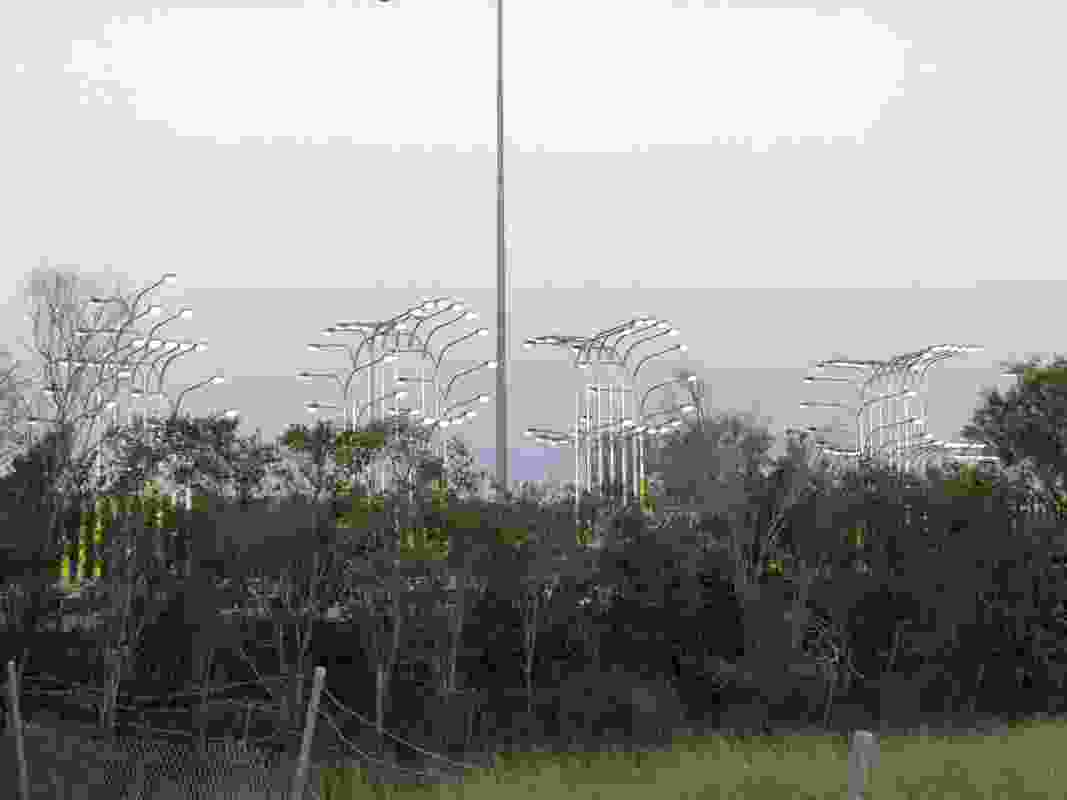 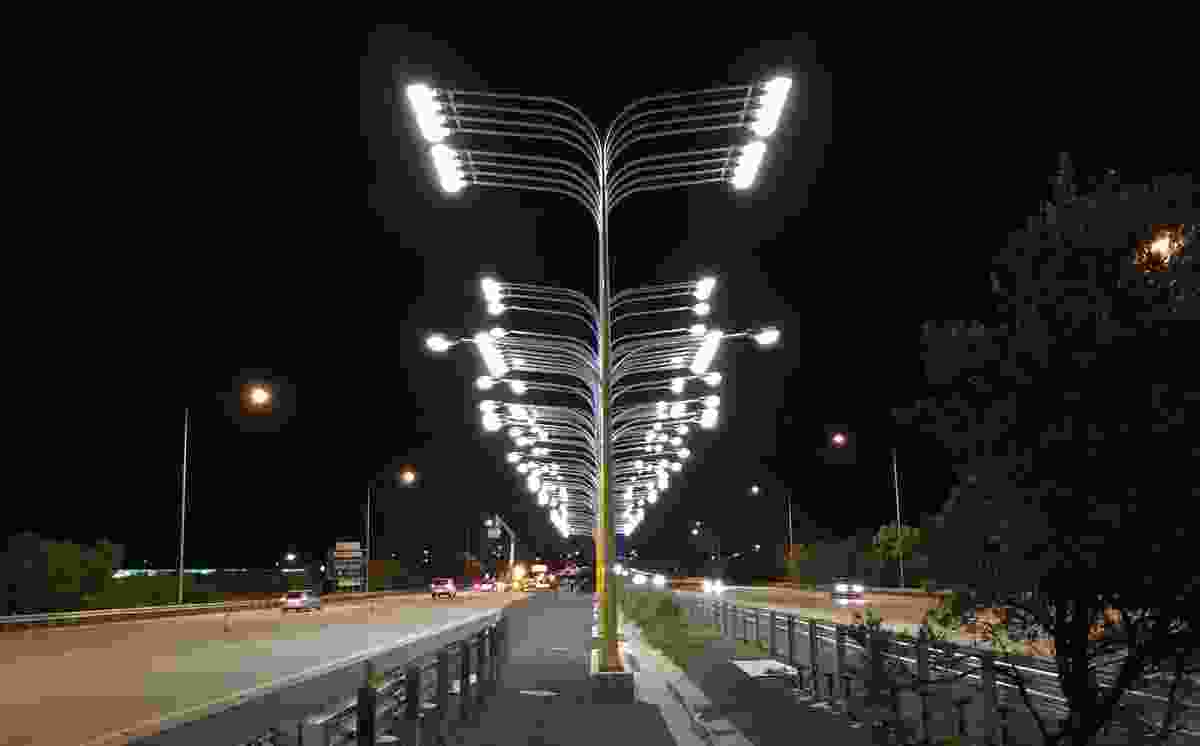 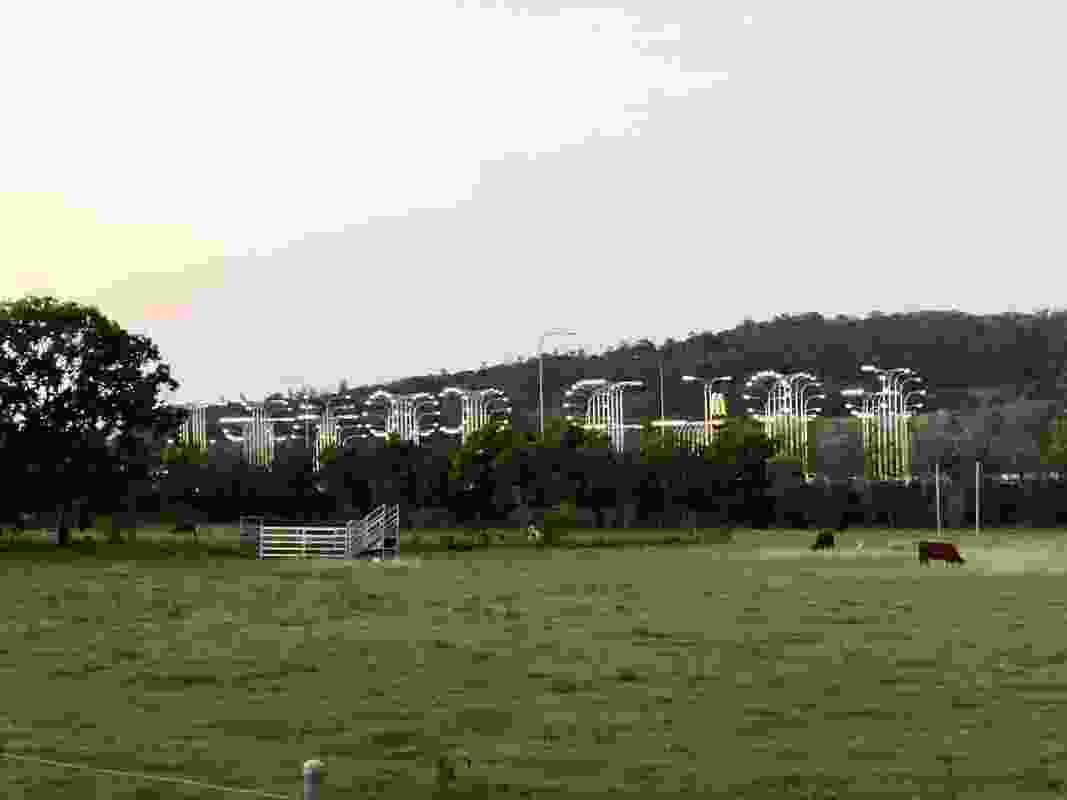 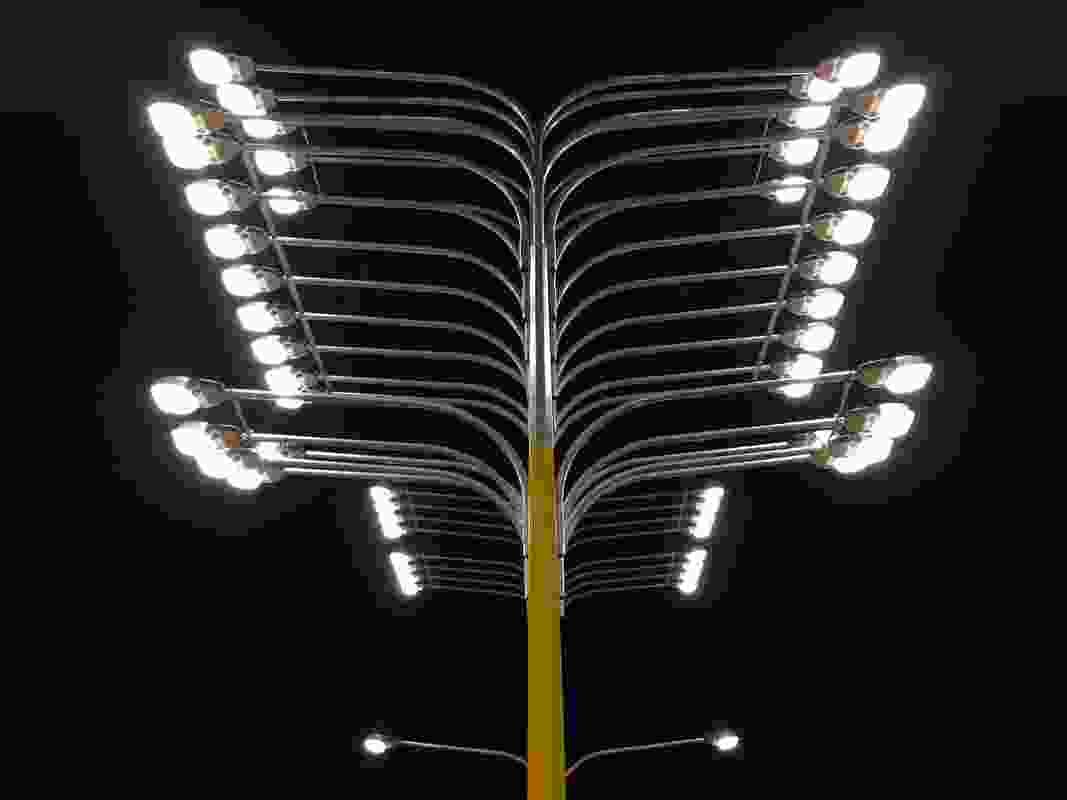