In the West MacDonnell Ranges outside of Alice Springs, the Larapinta Trail has been upgraded with semi-permanent camps by Neeson Murcutt Architects. Katelin Butler visits Australia’s Red Centre.

Nick’s Camp, near Simpsons Gap, named in honour of the late Nick Murcutt.

I’ve never had a burning desire to travel to Australia’s Red Centre. As a typical Australian, I have explored spectacular landscapes on the other side of the world, but until recently I’d never been to the Northern Territory. Now, having visited Alice Springs and partially trekked the Larapinta Trail in the West MacDonnell Ranges, I tell everyone that they must visit this incredible part of the world. It is impossible to remain unmoved by this awe-inspiring landscape.

The purpose of my trip was to view two new, semi-permanent campsites designed by Neeson Murcutt Architects for World Expeditions, which runs a guided walk of the Larapinta Trail. It is hoped that the campsites will make experiencing this landscape accessible to a broad range of people. They do provide everything you need – even a hot shower, if so desired.

Around 1995 the late Charlie Holmes – guide, leader and planner at World Expeditions – had been leading a trek through the West MacDonnells and Uluru from Alice Springs when he came across the then commercially unknown Larapinta Trail. Holmes led World Expeditions’ Larapinta Trail trek until he passed away in 2007; one of the new campsites is named “Charlie’s camp” in acknowledgement of his contribution. 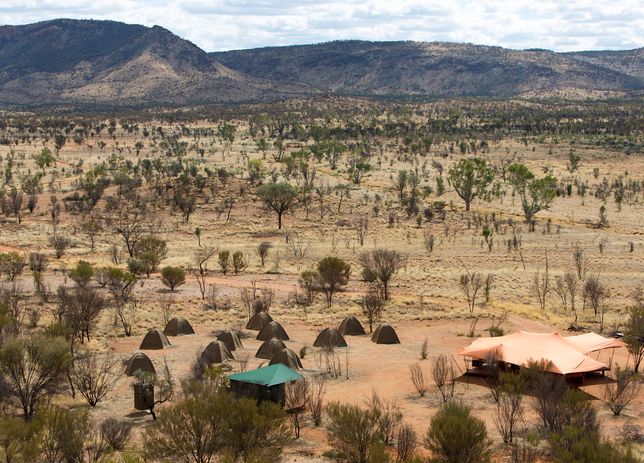 In 2005, World Expeditions recognized the potential to make the Larapinta experience more appealing to older and/or inexperienced trekkers. This was when negotiations with Parks and Wildlife Commission NT and Central Land Council began. The newly established joint management of the land is a mechanism, says World Expeditions’ Chris Buykx, “for engagement directly with the traditional owner community.” During the negotiations and face-to-face meetings between the three parties, much was learnt about the concerns and desires of the indigenous communities. Key issues raised by the traditional owners were the minimization of environmental effects on country, the provision of business and employment opportunities for traditional owners, and the safety of trekkers. Although there is a significant lease payment made to the traditional elders, this was not the focus of the discussions. This community consultation occurred prior to engaging an architect, as there was no way of proceeding without establishing parameters for the campsites.

World Expeditions’ decision to approach Neeson Murcutt Architects arose from an existing friendship – the two firms at one point had adjacent premises. The late Nick Murcutt had a special interest in camping and discovering a cultural response to landscape, so this project was close to his heart. After Murcutt passed away in 2011, his partner in work and life, Rachel Neeson, followed the project through to completion. The second campsite is named “Nick’s Camp” in Murcutt’s honour.

Ideas for the campsites have been partly drawn from Neeson Murcutt’s own Table Bed Tent, an adjustable aluminium platform (to be used as a table or bed) with a canvas tent roof and the firm’s exhibit for the 2005 Canberra Biennial. (The campsites’ raised, dust-avoiding platform, in particular, harkens back to Table Bed Tent.) The indigenous humpies of Australia’s north-east were also an inspiration. Like the Table Bed Tent, the Larapinta campsites combine traditional typology with high-tech material knowledge.

World Expeditions, alongside Parks and Wildlife Commission NT, chose to site the two semi-permanent campsites where there had already been a history of disturbance to the land.

For Indigenous Australians, the land is not just soil or rocks or minerals, but a whole environment that sustains and which is sustained by people and culture. Out of respect for this, the new structures have minimal impact on the land. World Expeditions, alongside Parks and Wildlife Commission NT, chose to site the two semi-permanent campsites where there had already been a history of disturbance to the land. World Expeditions is now actually trying to improve the land it uses, for example by removing weeds that cause fire.

The location of the communal platforms at both sites started with the campfire – the quintessential element of camping. The lounge and dining wings of the raised platform are arranged in a “Y” shape facing the campfire, so that it is the focal point. The kitchen wing (the tail of the Y-shaped plan) includes a full, commercial stainless steel kitchen.

The design of the canopy over the platform was inspired by the Bedouin structures of the Arabian Desert. Large and low, its orange stretch fabric melds with the colour of the earth and provides protection from sun and rain. Seen from above, the campsite is relatively invisible and the base and canopy are both designed to be completely removed from the site (apart from the structural posts) for the trekking off-season.

Access to and management of water is key to the design. Water is stored on site and used in cooking, washing and fighting fires. Grey water is collected and filtered into an absorption trench that has been dug into the soil profile. The toilet waste is treated on site via a composting system in the ground. The canvas shelters for the toilet and showers are a muted green, inspired by the colour of the spinifex and mallee.

After a hard but amazing day spent trekking through the West MacDonnell Ranges, catching a glimpse of Charlie’s Camp was an exciting moment. I had a quick shower, and then went back to the communal platform to relax in the lounge area while chatting to the lovely young guides who were preparing our dinner. What an amazing experience – one I hope I’ll be back for again.

The Larapinta Trail Campsites project (LTCP) by Neeson Murcutt Architects is located in one of Australia’s most beautiful and remote desert landscapes. The project incorporates a strong indigenous element. As Chris Buykx of the tour company World Expeditions explains, during negotiations elders were more concerned with establishing a connection between their young people and the landscape than with revenue. The elders feel that because their young people have grown up in “urban” settlements they have lost a connection with their traditional land. The LTCP has supported developing this desired connection by engaging indigenous young people in tourism– and cultural–related training and/or employment.

Such initiatives foster the realization that we, as designers, can include a community development element in our projects. However, when someone is organizing or deciding whether or not to participate in a community development project (e.g. as a volunteer) there is a fundamental consideration: is the work a “needs”– or asset–based exercise? The distinction is important, as a needs approach implies a deficiency of some sort that normally comes to light through a comparison between parties (e.g. us and them, developed nation versus developing nation).

In contemporary debates this type of “deficiency thinking” is considered inappropriate as there is an unintentional division created between parties. In community development, asset– and/or co–production–based approaches are regarded as more appropriate. Such approaches allow for the strengths of a community to be identified and potentially utilized and for partnerships between local populations and external parties to be established. The intention behind the partnership is to then jointly realize projects that predominantly benefit a local community.

To illustrate “needs versus asset,” when I was last in Nepal (September 2012) the Junbesi Development Committee (JDC) told me it needed a (foreign) sponsor to pay for the annual employment of a local librarian so that the library could be reopened. The amount required annually was $1,500. What the JDC did not consider was that it had a number of community assets it could draw from to achieve this same end; in particular, the local high school, which trains its teenage students in management and leadership.

The LTCP is extremely recent, so I hope it is successful and that it facilitates a strong connection between the young people and the landscape of this significant part of outback Australia. 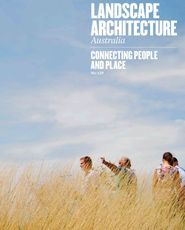 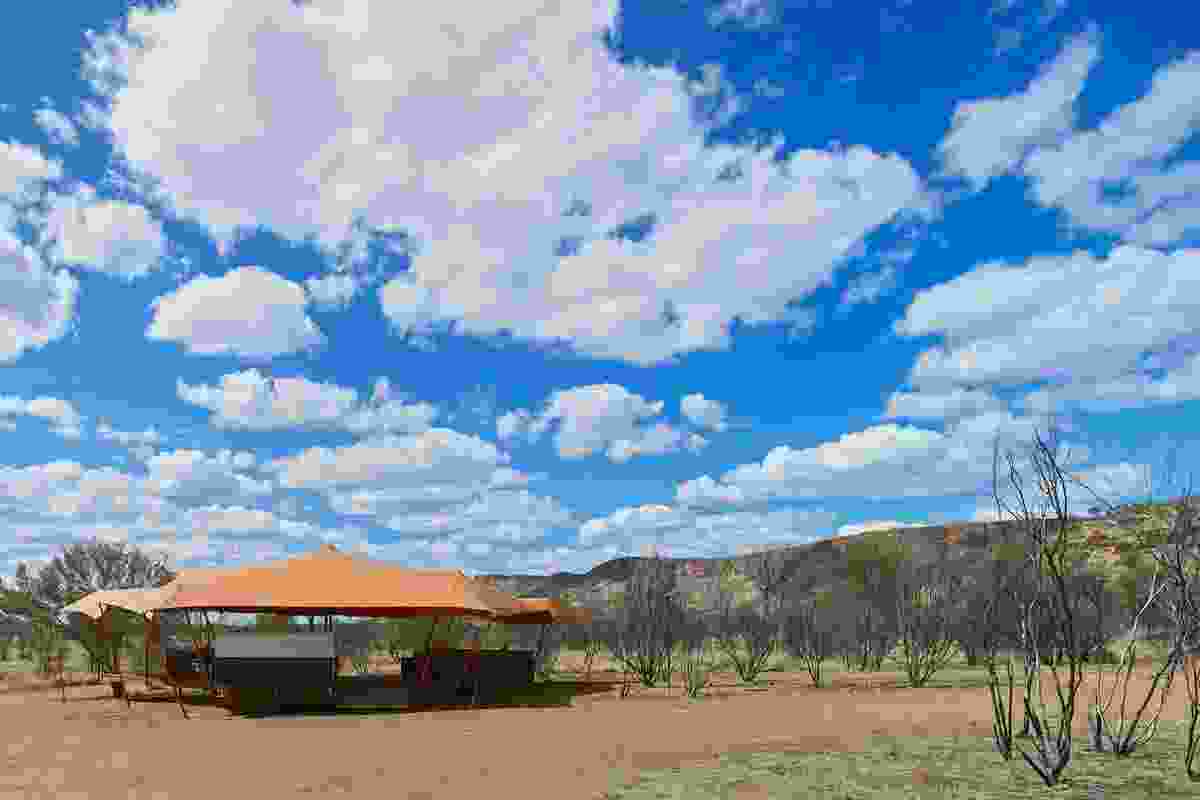 Nick’s Camp, near Simpsons Gap, named in honour of the late Nick Murcutt. 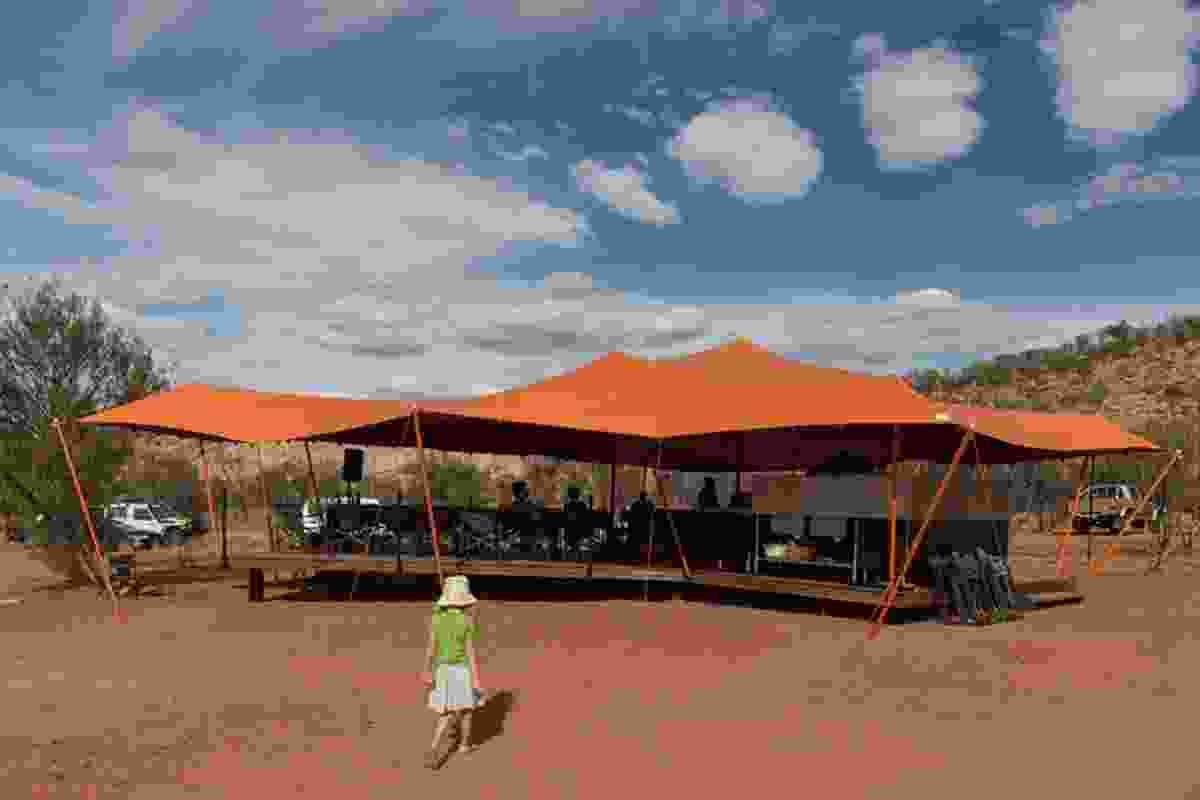 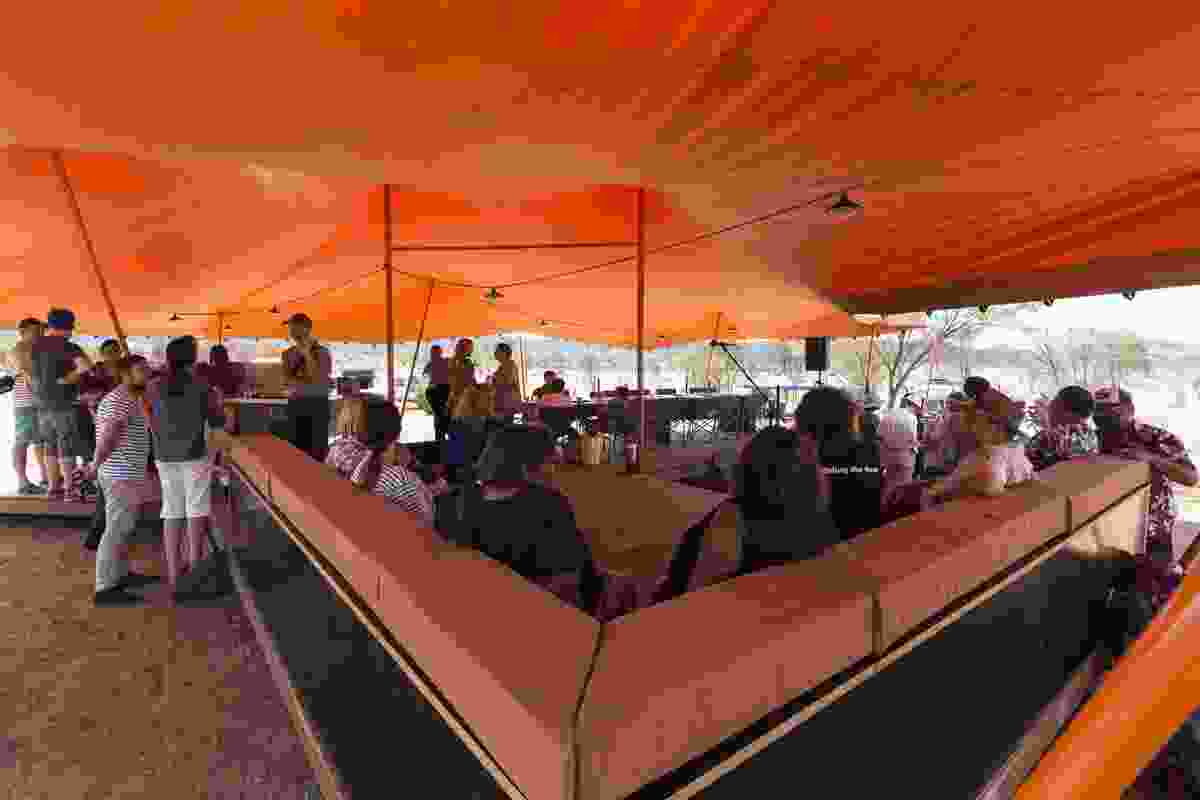 The public platform at Nick’s Camp opening in May 2013. 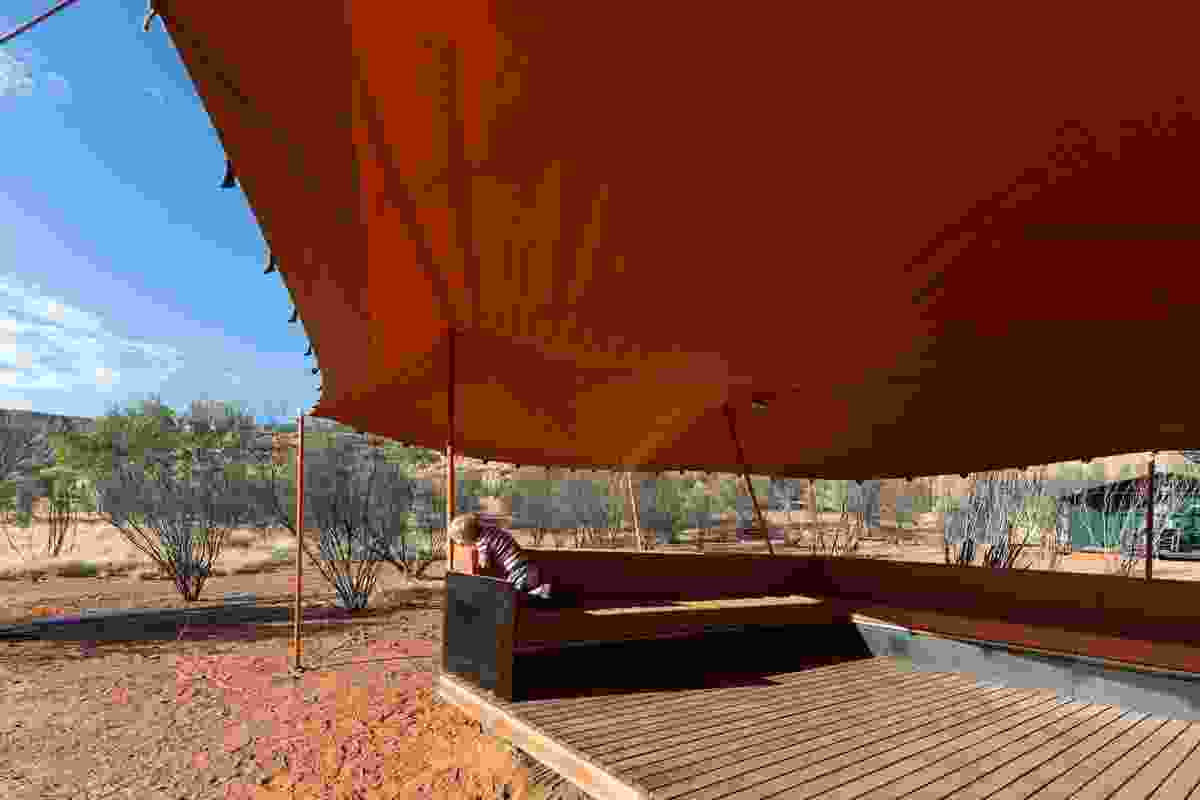 The lounge wing faces the campfire. 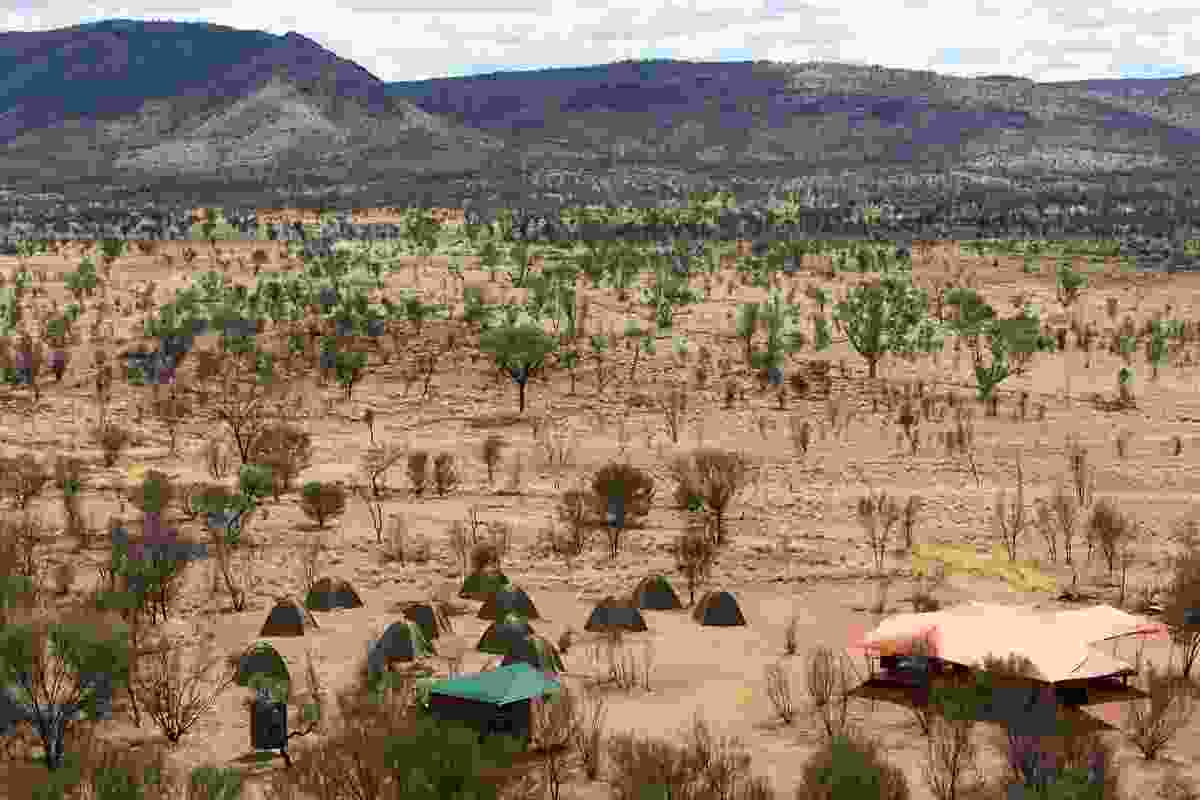 Nick’s Camp has a communal platform, individual tents and ablutions block under canvas. 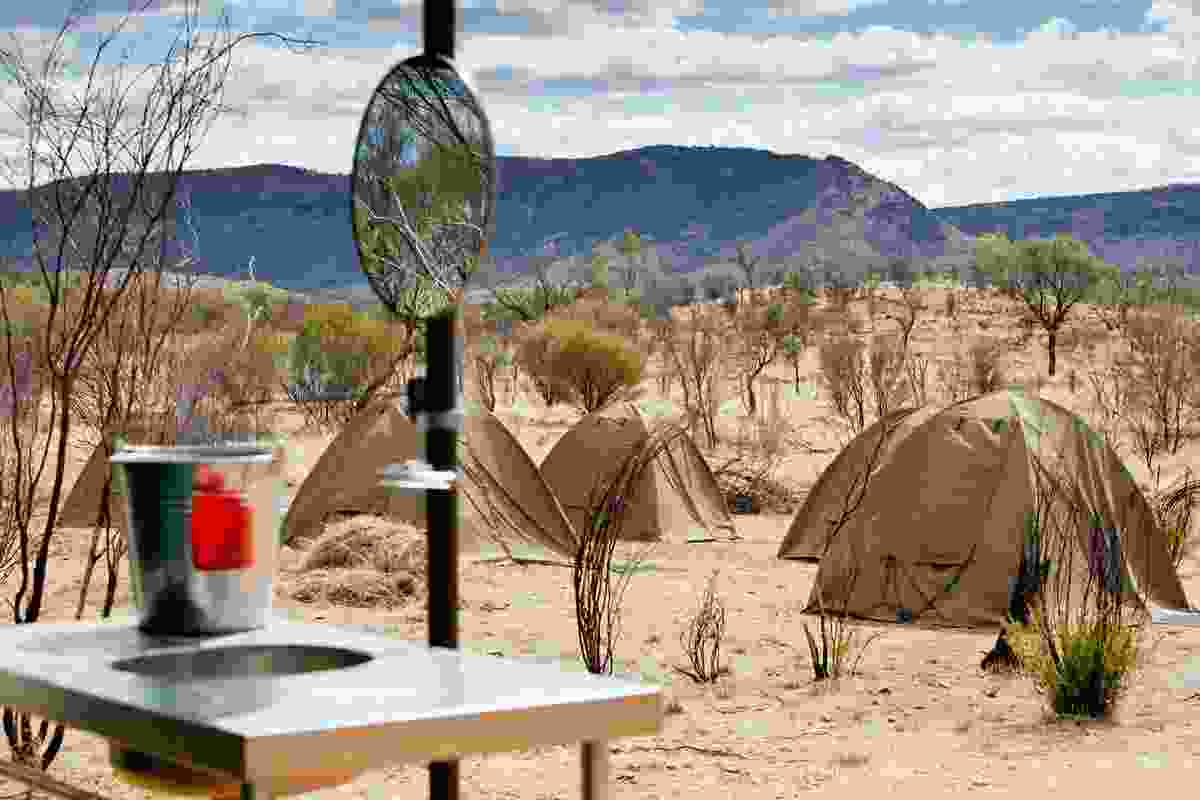 The muted green of trekkers’ tents was inspired by the colours of spinifex and mallee. 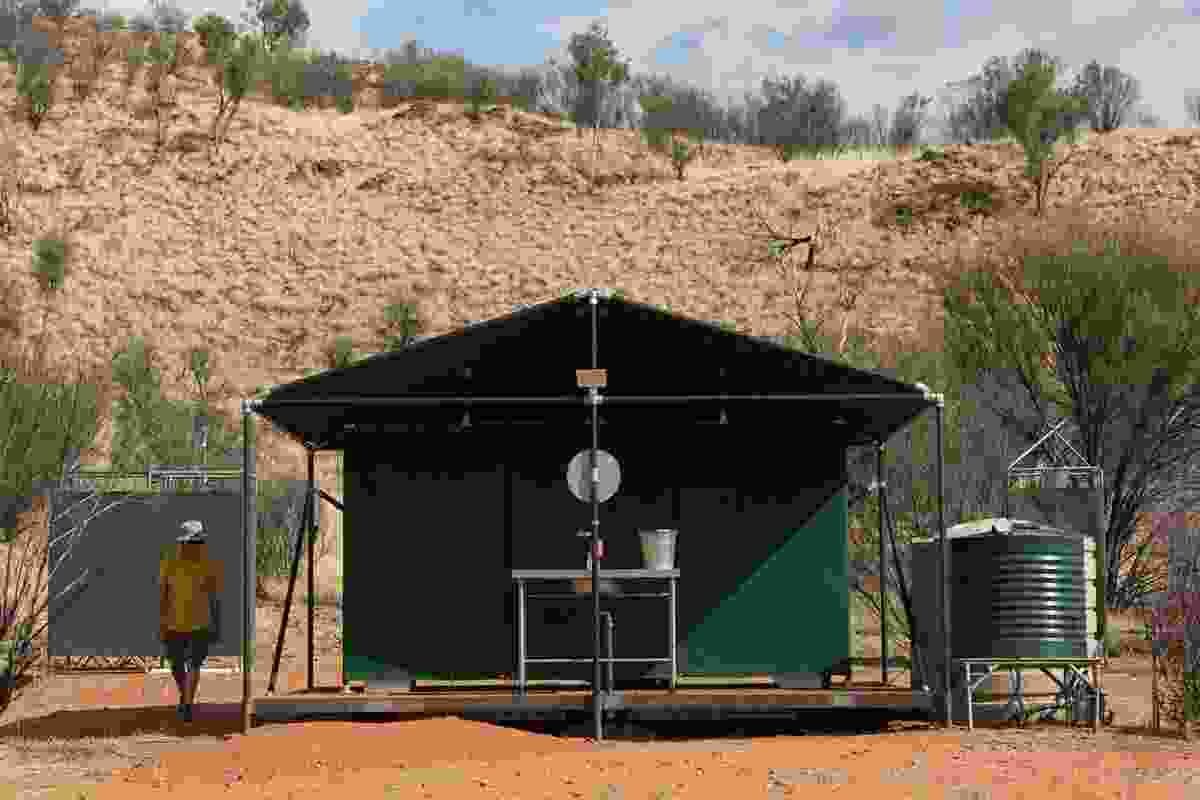 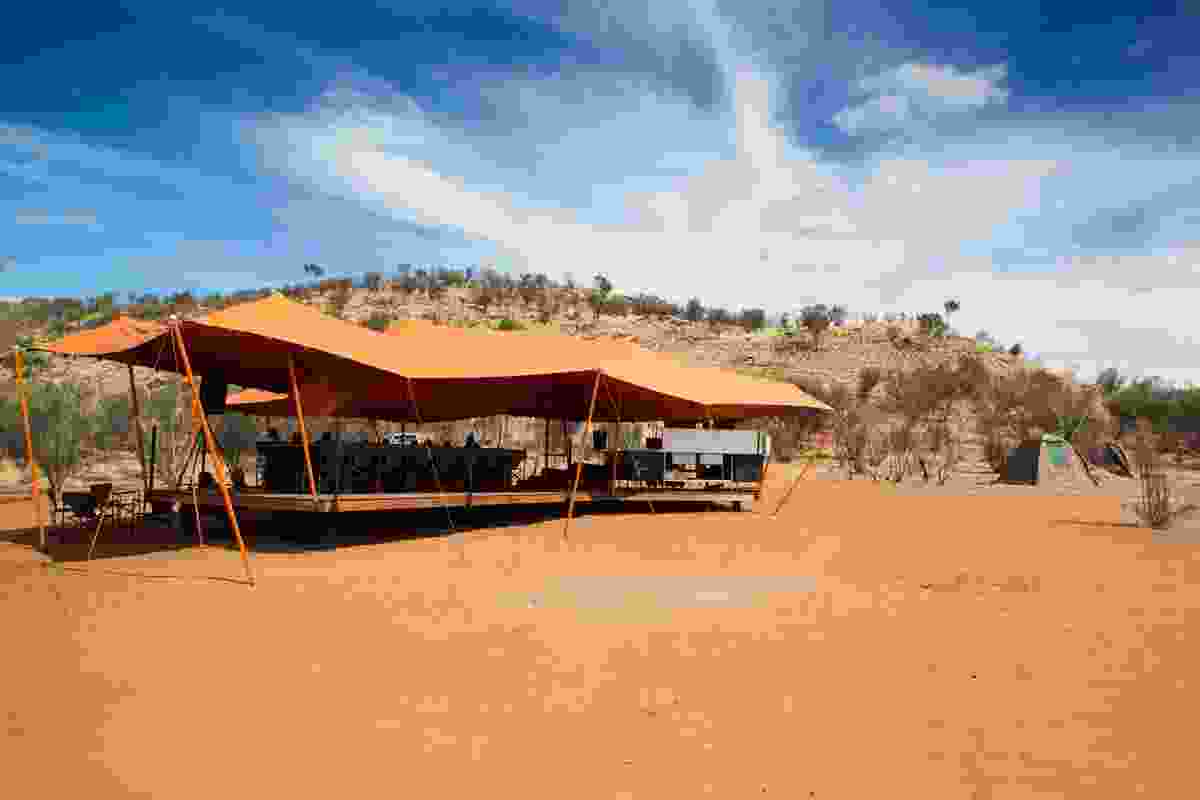 While the canopy shape was inspired by Bedouin tents, its colour melds with the baked red earth. 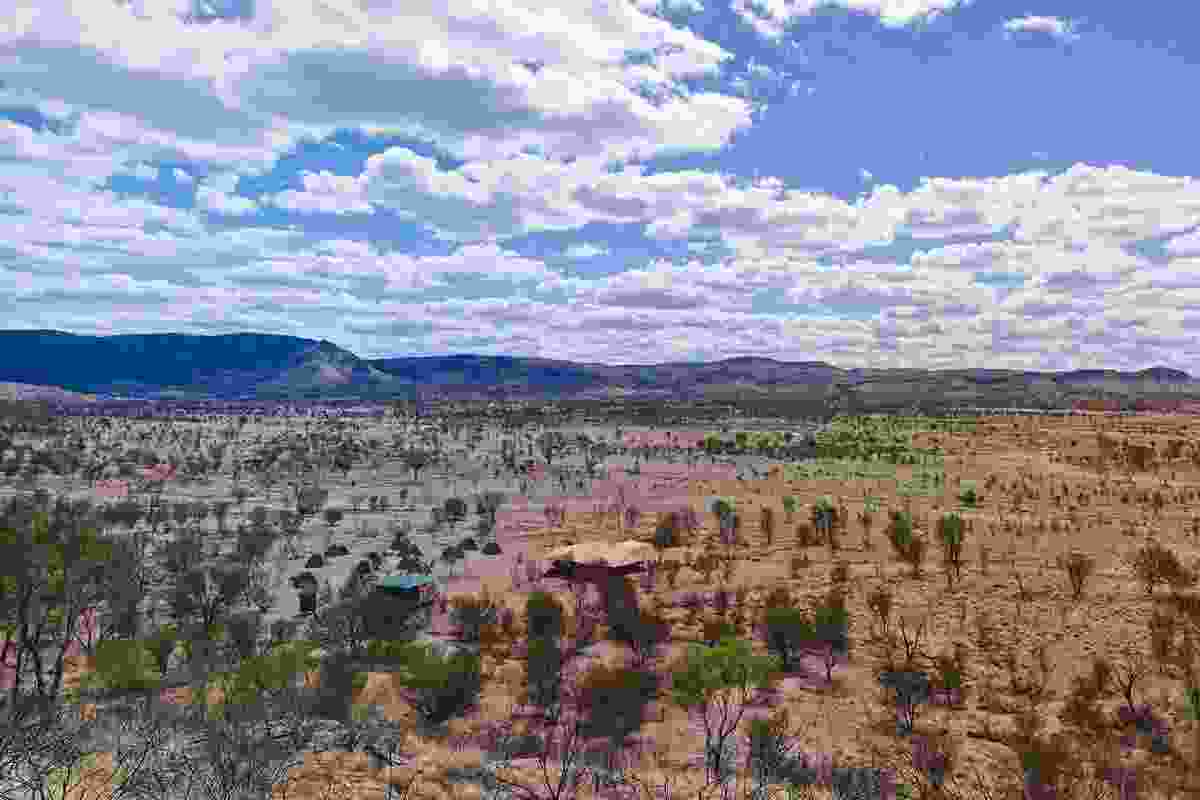 Campsites are placed in areas with a history pf previous disturbance. 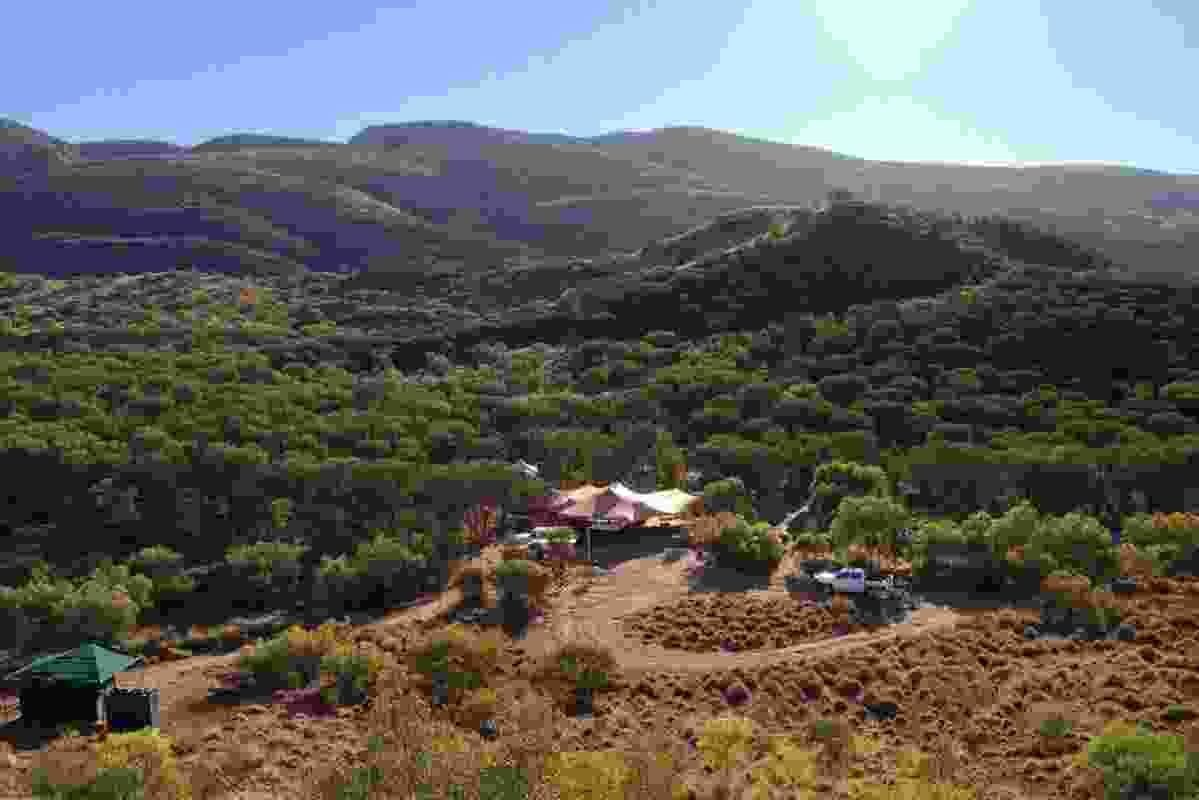 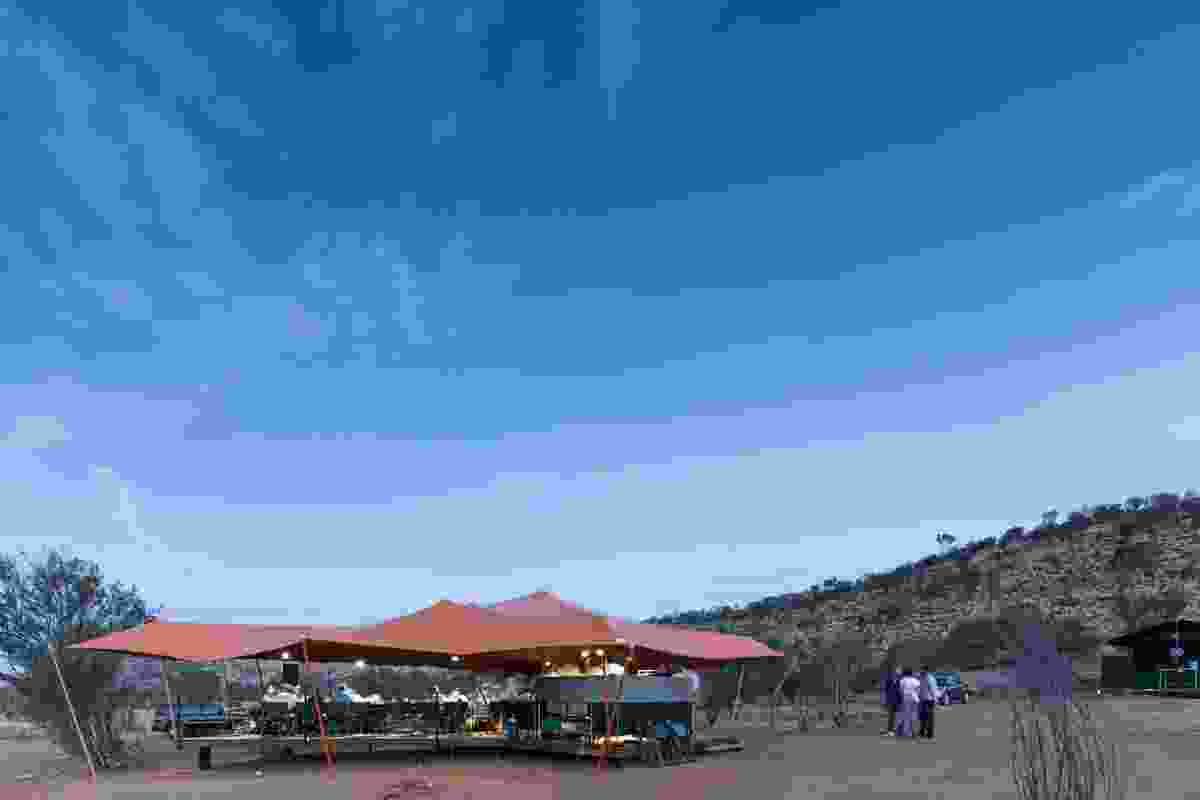 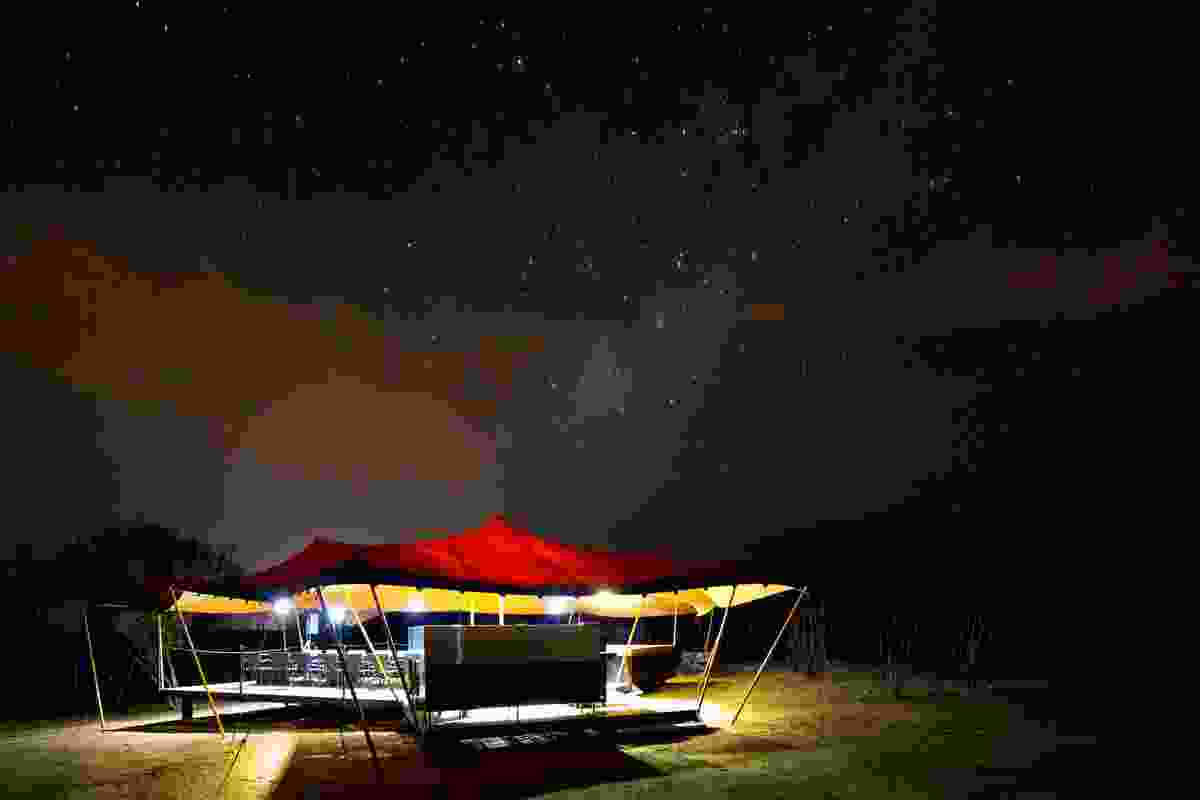 Nick’s Camp public tent under a blanket of stars. 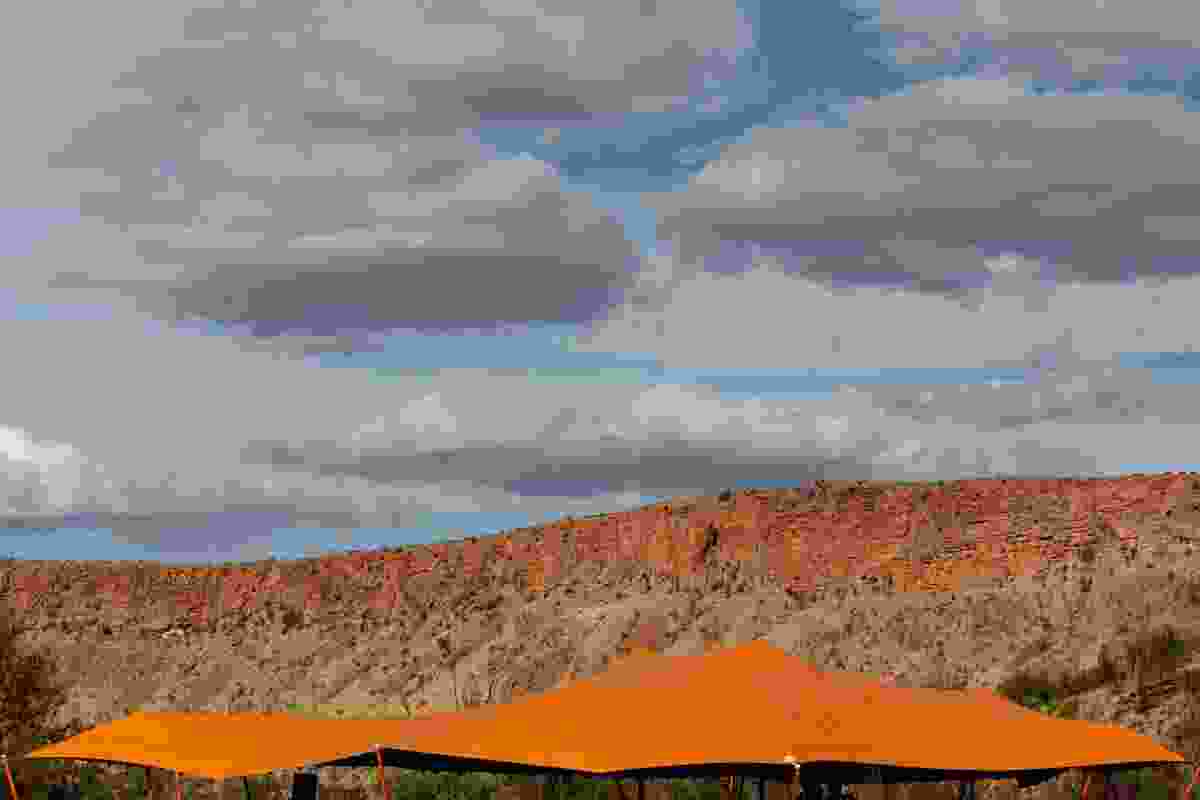 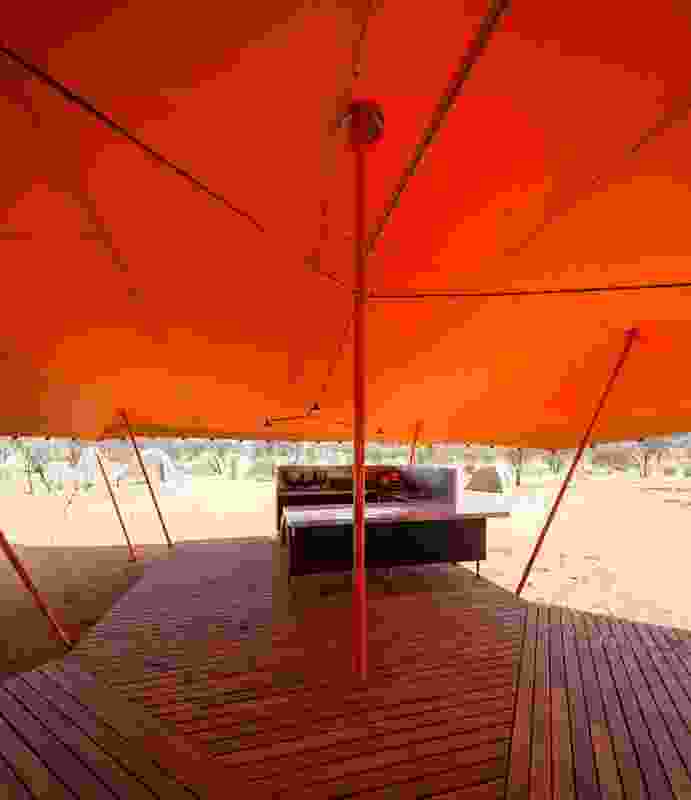