The muted earthy tones and winding form of the walk soften both its visual and physical presence within the ecologically significant Jock Marshall Reserve.

If you are a close follower of landscape architectural and architectural media in this country, you may have noticed that Monash University has been popping up as client quite a bit in recent years. On the back of an award-winning masterplan prepared by MGS Architects in 2011, the university has wasted no time in implementing key projects in its ambition to transform itself and climb the global university rankings. Led by registered architect, landscape architect and urban designer Jocelyn Chiew, Monash’s manager of Campus Design, Quality and Planning, the university has been commissioning significant public realm projects across its two Melbourne campuses, Clayton and Caulfield, at a phenomenal rate.

Monash University is Australia’s largest university in terms of student enrolments. Its main campus at Clayton, in Melbourne’s south-eastern suburbs, is also relatively isolated from public transport – students have to bus to the nearest train station and there are no trams in the vicinity. Its location makes it difficult to pop home for lunch or to study between classes, so having an attractive campus full of amenity is essential in order to attract students in Australia’s increasingly competitive tertiary education sector. Cultivating a “sticky campus” (one at which students dwell between classes) is exactly what universities desire, no matter their urban or suburban location.

The design brief for the Jock Marshall project came out of a line drawn on the Clayton Campus Landscape Masterplan (part of the Clayton Campus Masterplan 2011–2030 by MGS Architects with Aspect Studios) that connected Blackburn Road to the campus spine around Jock Marshall Reserve. Prior to the construction of the bridge, the two sides were only connected by a goat track down a steep drop from the road. There was an increasing need for the university to better connect to the road as a number of new buildings, including student accommodation, had been developed on the other side.

“There was actually no project until we did a mid-level plan,” explains Tim Hart, director at Urban Initiatives. “The mid-level plan identified a whole lot of improvements and the one that we thought was the most expensive and would never get up, at least for a long time, was the one that the university jumped at and somebody said, ‘Yeah, let’s do that.’”

Creating a pedestrian link through Jock Marshall Reserve was not a simple proposition, as the reserve functions as a kind of laboratory for the university’s School of Biological Sciences and has controlled access, with a tall chainmesh fence circling its perimeter. Established in 1961 by the Foundation Chair of Zoology and Comparative Physiology, Professor Alan John “Jock” Marshall (1911–1967), the reserve is described by the university as “an important resource for environmental research, education and outreach,” though it’s clear that it’s in need of some improvements.

Urban Initiatives saw an opportunity to go over the reserve, as the levels on both sides of what they needed to connect were essentially the same. Given these site conditions, an elevated structure made sense. There was some initial resistance to the concept from the School of Biological Sciences, but according to Hart, everyone eventually came to the table on the elevated boardwalk idea.

In order to minimize disturbance to established trees, Urban Initiatives used drone surveying to identify the most appropriate route across the site. It also used drones to locate suitable dwell points, where people could sit down and enjoy the view over the reserve’s pond and remnant vegetation. Robust materials such as spotted gum and Corten steel make up the material essence of the bridge, which is supported by Y-shaped steel columns to minimize ground disturbance.

Inspired by the description of the reserve as the “lungs” of the campus, Urban Initiatives developed a pattern from human lungs that was then laser-cut into the Corten steel panels that define the edges of the walkway. While somewhat macabre in concept – thankfully, you’d never know if you hadn’t been told – the subtle organic pattern lends texture to the walk’s surface, creating an interesting play of light.

Due to its proximity to the university’s residential colleges, much of the walk had to be prefabricated offsite and craned in for assemblage. A further complication that had to be overcome was a Melbourne Water easement that the walk had to cross, which resulted in a large span being engineered in such a way that it could be unbolted and lifted away if and when necessary.

Two breakout points along the walk feature custom-designed hardwood furniture and provide opportunities for people to sit and enjoy the reserve’s bushland setting. Clever consideration of students’ needs has resulted in the design of handrails on the seating that allow for the resting of notebooks or iPads – a handy feature for students conducting field research on the reserve’s ecology. An unexpected benefit to come out of the project was that researchers could install infra-red equipment on the underside of the bridge to monitor nocturnal animal life in the reserve.

While the walk feels incredibly sturdy when you pass over it, its materiality and winding form soften its presence among the trees.

The Jock Marshall Reserve Nature Walk is another well-integrated and considered addition to Monash’s Clayton Campus landscape portfolio, one that works to bring the previously tucked away Jock Marshall Reserve into the everyday life of Monash Clayton, for the benefit of students, staff and the general public alike. 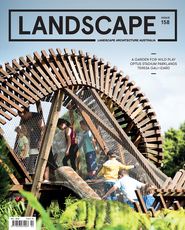 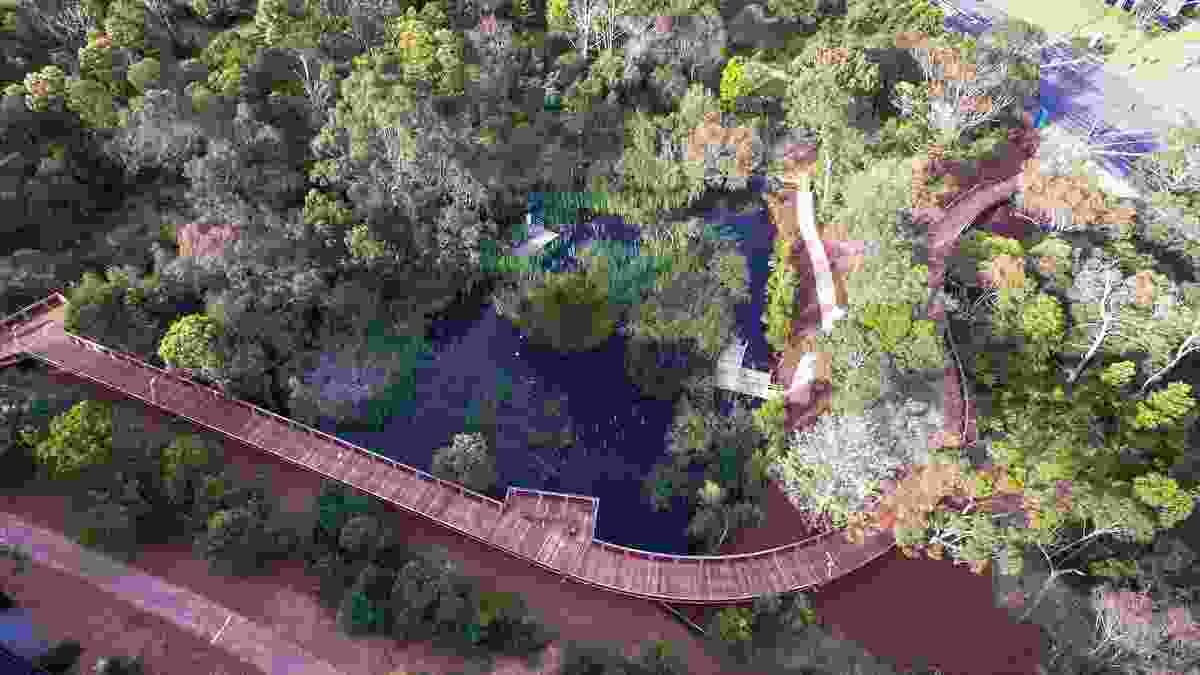 The muted earthy tones and winding form of the walk soften both its visual and physical presence within the ecologically significant Jock Marshall Reserve. 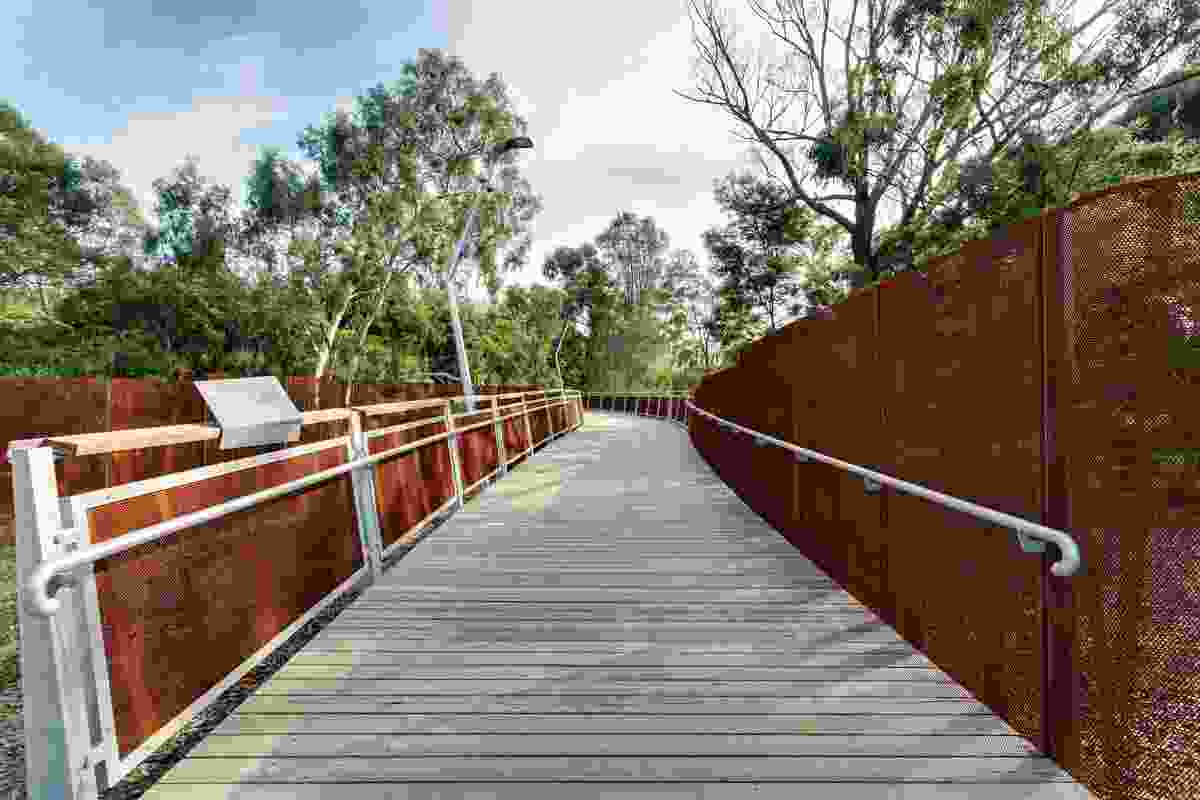 Crafted from sturdy materials, including spotted gum and Corten steel, the bridge is supported by Y-shaped steel columns that minimize disturbance of the ground plane beneath. 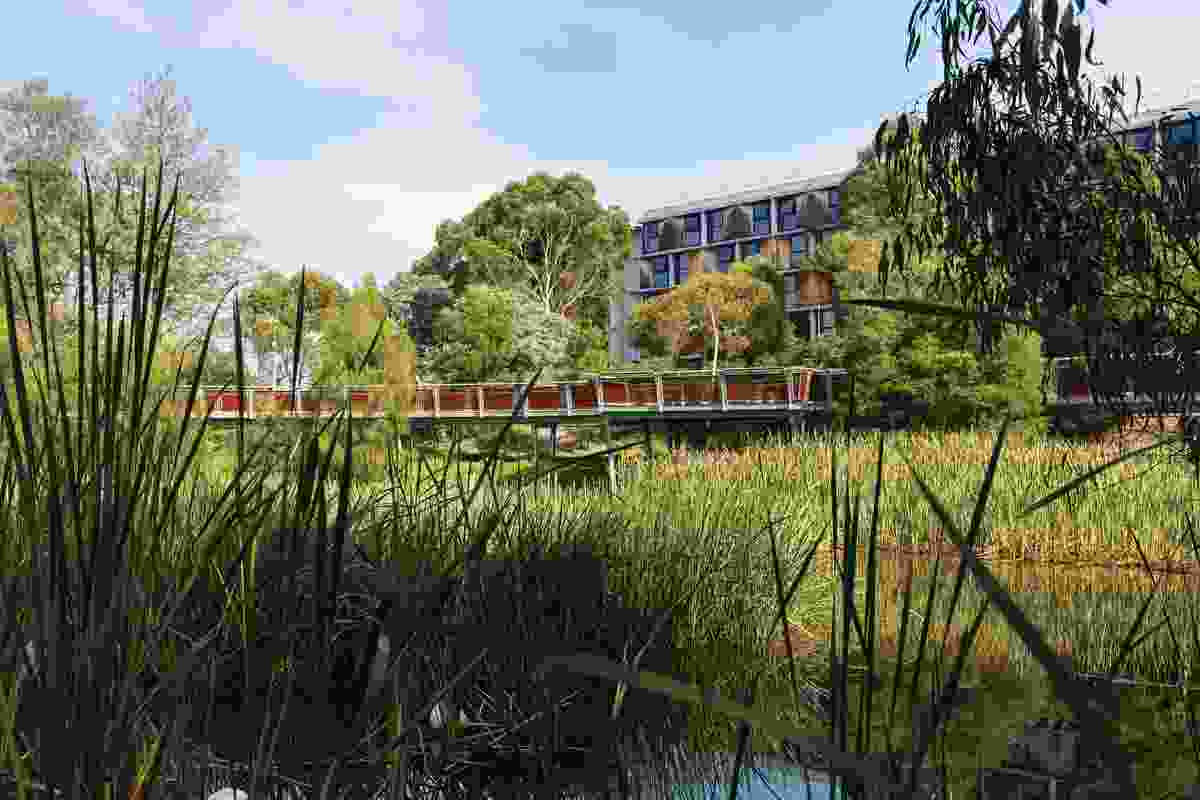 The walk hovers above the reserve, providing visual access to the habitat beneath, while connecting the university campus to nearby Blackburn Road. 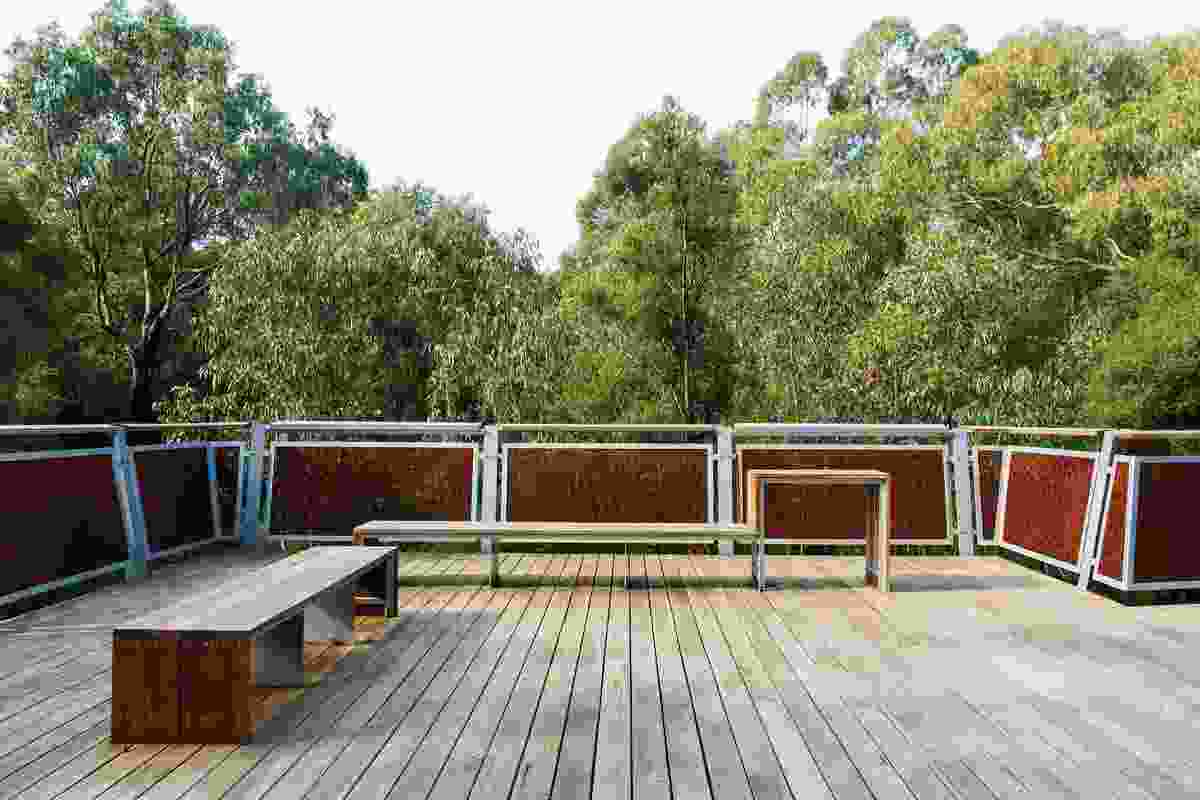 Custom-designed hardwood seating at key points along the walk provides vantage points for visitors to observe the area’s unique habitat. 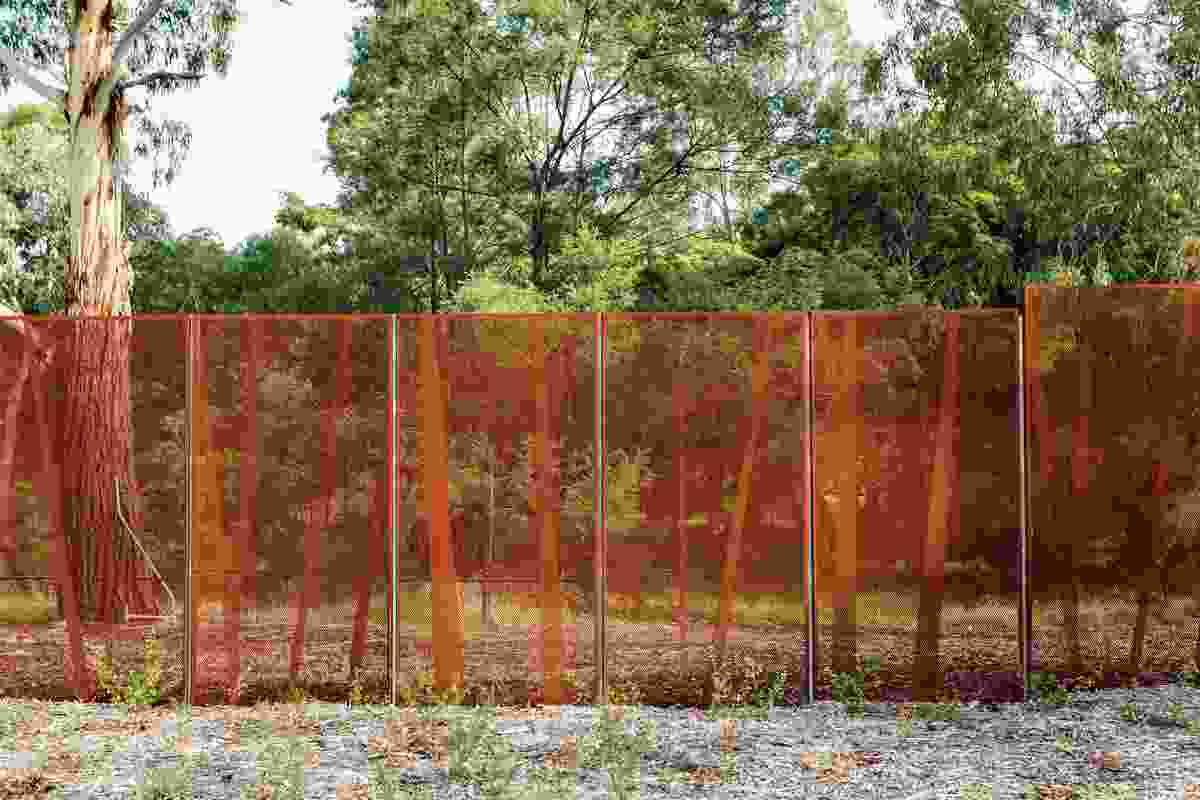 Abstracted tree trunk fence panels subtly reference the biological sciences while helping to protect the sensitive ecology of the reserve.