Aspect Studios has upgraded this boat harbour in Tweed Heads, creating a civic waterfront parklands for the Tweed Shire community.

This story wall, one of four at Jack Evans Boat Harbour, will contain indigenous artwork and information panels.

Located near the mouth of the Tweed River, the Jack Evans Boat Harbour has long been a favoured spot for the Tweed Heads community of New South Wales. Featuring a safe tidal inlet with gently sloping beaches and rocky shores, it offers easy water access for swimming, boating and fishing. The boat harbour is a low-key alternative to the nearby ocean beaches of northern New South Wales and the Gold Coast, and was targeted by Tweed Shire Council as a cornerstone of its strategy to revitalize the flagging local economy, by increasing visitor traffic and local use through the realization of a strong, multifunctional landscape architecture scheme.

Building upon a concept plan devised by the council’s landscape architect Georgina Wright, Aspect Studios has gone a long way towards meeting its client’s objectives. The project is subtle, assured and competently executed. It demonstrates an informed appreciation of the site’s social and natural ecologies, but also experiments in matters of planting, construction materials and site planning. The council is to be commended for its strong endorsement of this attitude, the implications of which were explored by its in-house team in conversation with Aspect. In turn, Aspect deserves credit for delivering a project that has all but eliminated any memory of the harbour’s previous incarnation.

This has been achieved through a series of careful adjustments, including shifts to the line of the harbour edge, amplification of important moments along that line, and the formalization of local use habits. The inlet at the mouth of the river has had to alter its course over many decades, meaning the development of the boat harbour posed challenges in the control of water quality, flood and storm surges, diversity of flora and fauna (prompting a mangrove regeneration project), variations in water salinity and wind exposure, management of dune formation and cultivation of resonant environments, both above and below the waterline. The design trades a scrappy and poorly maintained playground for a highly resolved shoreline development.

In plan, the main formal gesture is a single arc extending from the harbour’s south-west corner to the north-east point. This governing line has survived from the council’s concept plan through to realization and acts to firm up the existing habits of use and to ensure a degree of minor land reclamation. A cycle path from the beach deck to the western edge of the northern beach offers a clear outer limit to this gesture, while the harbour edge sustains subtle moments of formal interference registered as shifts in materials and flora, and casual interruptions to the walking path. There are also changes in attitude towards the harbour itself, as the beach terrace becomes a detached promenade before giving way to monumental preformed concrete steps and, on the other side of the northern beach, a long rock revetment.

The northern beach is the scheme’s most pronounced design element: a moment of geometrical figuring that can be read in the adjacent pathways and the trapezoid indentation of the beach inlet. A modest sand bank concedes to graded decking as the beach transitions to the parklands. The headland and rock pools imply the continued line, with their steps disappearing and reappearing with the tide, recalling water’s-edge work by Carlo Scarpa, Alvaro Siza and, more regionally, New Zealand practice Isthmus. Strong orthogonal forms are quickly traded for natural forms as tightly choreographed boulders define tidal pools, over and around which children can scramble. Where nature wins on the eastern “shore,” the western edge upholds a more rigid linearity.

The $8.5 million stage one works have firmed up the harbour edge, striking a comfortable balance between context, form, materiality and utility. And in all of this agreeability and resolution, we find the project’s weakness. As much as it might appear finished, the project’s real economic and cultural efficacy lies with the works planned for stage two. These add to the boat harbour more obvious points of access, better parking, bathroom and shower facilities and a cafe kiosk – sacrificing, it must be noted, a caravan park that has long served the community. Importantly, stage two would also complete the Aboriginal and Torres Strait Islander Goorimahbah – Place of Stories wall by introducing an indigenous botanical garden and public art program to what is now a fine, but peripheral formal element. Don’t stop now, Tweed Heads – you’re almost there.

“In 2005, Tweed Shire Council embarked on a project to redevelop a local parkland that had regional, state and national significance. Many community members simply wanted a park with more grass and trees, but the council engineers needed a public asset that would be resilient to the threats of climate change and maintenance issues common in coastal environments. Landscape architects working with local councils are among only a few professionals in a position to mediate these agendas, which often contrast dramatically in scale. This is done with patience, and by recognizing each agenda as a means to an end.

“In 2011, after six years of planning and waiting for capital works funding, Stage 1 of the Jack Evans Boat Harbour parklands was redeveloped. The design aimed to embrace the complexities of a tidal estuarine environment and meet the pressures of its contrasting urban landscape.

“Aspect Studios’ design has succeeded in formalizing the landscape at the edge of the harbour, where previous built lines have failed. The project embraces the challenges of the site, using tidal water to bridge the scale divide between the intimacies of the local user and the growing needs of an urban coastal parkland.

“The main measure of success is that the dramatic rebuild has created a place that feels like it has always belonged there. Where local criticism may have earlier been directed at the proposed volume of concrete and large-scale infrastructural hardening of the water’s edge, these are the assets that are now praised.

“Surprisingly, this new, popular landscape is the result of the intense bureaucratic processes inherent in regional coastal councils, and public scrutiny. It is the closeness of this bureaucracy to the landscape and the council’s relatively new introduction to the rigours of the landscape architectural process that have – though at times painstakingly slowly – ensured the success of this project.” 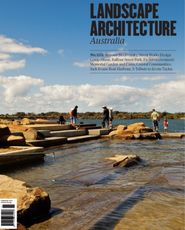 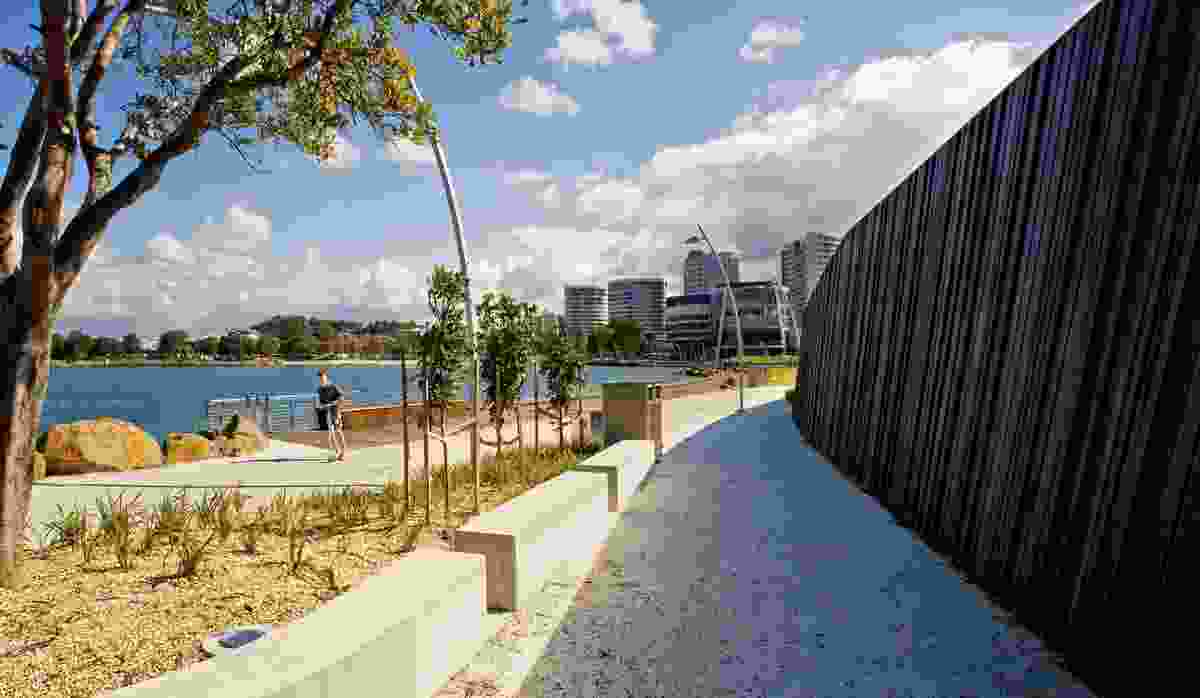 This story wall, one of four at Jack Evans Boat Harbour, will contain indigenous artwork and information panels.

A new deck placed around existing trees provides a shady setback from the beach. 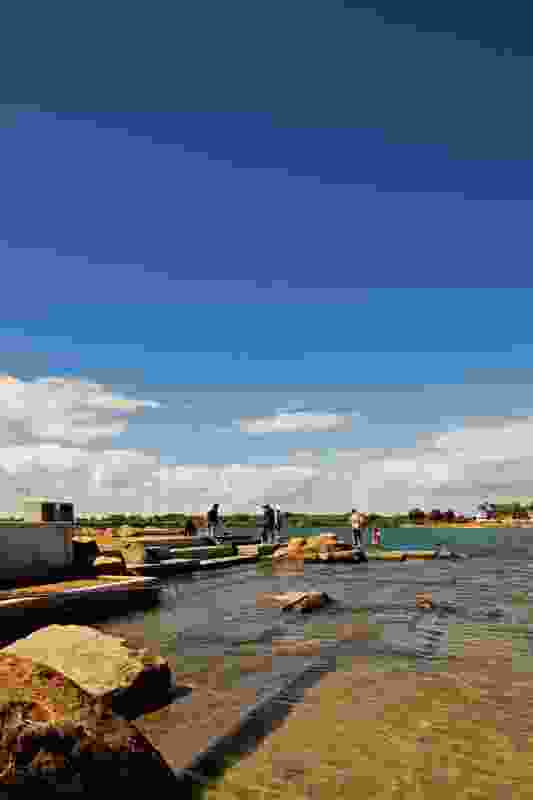 Through its steps, rocks and tidal pools, the waterfront design reveals the processes of time and tide. 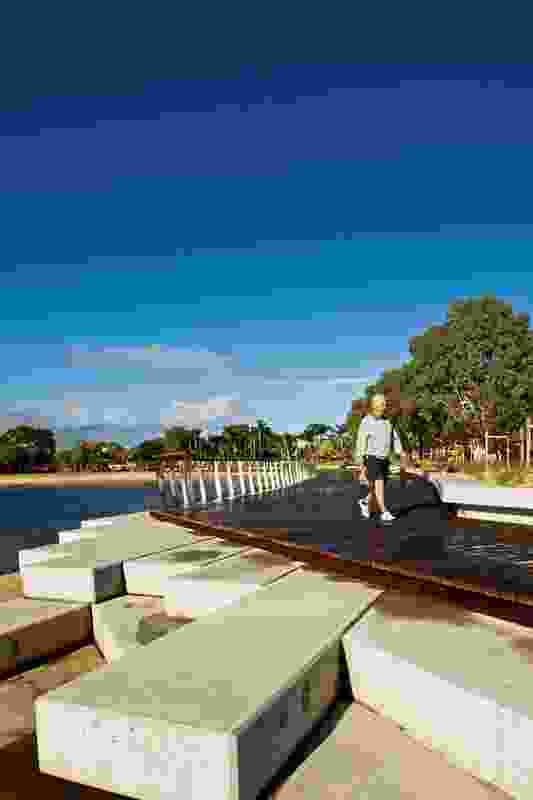 A new promenade sits over the water where it was not possible to provide a beach edge.

The back of the story wall features a large viewing mound.

A design diagram marking the shifting relationship between sand, water and land edge.

As the tide comes in and out, it marks the geometric concrete blocks that feature at the headland. 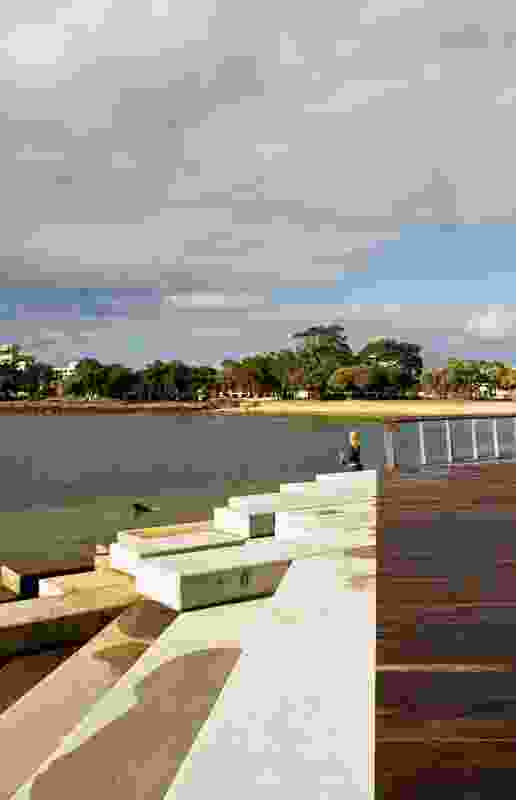 The pre-formed blocks use three types of concrete finish.