Polite, restrained, and immensely thoughtful - these are the hallmarks of Deborah Nevins, a New York-based landscape designer who once said “the best compliment one can pay me is to think I didn’t do a thing.” Nevins’ early career involved lecturing on the history of landscape design, with initial design commissions coming from architects seeking settings for their client’s houses. As her design work become better known, Nevins undertook numerous gardens for prosperous and prominent clients across the United States and in the Caribbean. Nevins’ residential work uses hedges, walls and massed plantings to form vistas and garden “rooms.” Fountains and swimming pools provide visual pivot points and lawns are artfully stepped or smoothly graded. These elements provide a quiet but conscious framework that leads the eye out into the broader landscape, or back to a building.

Fate took a hand when a wealthy American family commissioned architect Renzo Piano to design them a large vacation house in the Rocky Mountains and requested Nevins’ involvement to resolve its landscaped environs. In the course of this commission, an important working relationship was established between Piano and Nevins, taking her career into the realm of large-scale institutional projects.

In 2008, Renzo Piano was selected to be the architect for the Stavros Niarchos Foundation Cultural Centre in Athens, centred on a new National Library of Greece and a new national Greek Opera House, and located near the Bay of Faliro to the city’s south west. The vast site, almost completely flat and bounded by main roads and blocks of apartments, had previously been a horse racing track, and more recently a carpark for the 2004 Athens Olympics. Located in a district called Kallithea, meaning “beautiful view,” this aspect had been lost over time. Piano invited Nevins to design the Centre’s extensive park setting.

Piano’s response to the flat and unprepossessing site was to create a new tilted landform that sweeps over the monumental new structures of the library and the opera house. The resulting hill rises some 35 metres where it culminates above the opera house in a belvedere (or symbolic temple) with delicate columns supporting a slim and elegant roof. From here splendid views are offered out to sea, towards the island of Aegina, or back to the city’s iconic Acropolis.

Nevins’ sloping landscape is gridded with porous gravel paths, with diagonal walkways at lesser grades enabling universal access. The beds between the paths are punctuated by large old olive trees and occasional cypress pines; drifts of ground covers and perennials carpet the areas between the paths. The powerful geometry of the sloping landscape provides a handsome foreground to the hilltop “temple.”

In developing the design, Nevins sought to “convey the smells and flavours of the Mediterranean.” Aiming for year-round planted interest and drought-hardy species, she incorporated the tough trees of the region into the park, including olives, conifers, Arbutus and Prunus. The landscape’s lower plantings are generally evergreen, endemic and fragrant, and include box, Coronilla, Cistus, Pistacia lentiscus, salvia, oregano, thyme, lavender, rosemary, roses and Euphorbia.

The resulting park is a blend of the formal and informal. Nevins has retained existing mature eucalyptus trees around the margins of the site; the level areas at the base of the hill include an impressive 400-metre-long canal fronting the entries to the library and opera house, an expansive lawn for public events, a pine grove of Mediterranean species (including Pinus pinea and Pinus halepensis), an outdoor gym, a running track, a children’s playground and even a labyrinth. Trees and shrubs provide shade, and along with several fountains and the linear canal help cool the environment. While some irrigation is required in summer to sustain the park’s plantings, most species are drought tolerant. Water is collected and stored, filtered and recirculated.

The Stavros Niarchos Foundation Cultural Centre, including Nevins’ park, was completed in 2016. In all, the park features 1,400 trees and 300,000 shrubs, perennials and native grasses (brought in from the hills outside Athens). The project required the importation of large quantities of fertile soil and the resolution of complex planting and drainage issues above the new structures. Obtaining and nurturing the quantities of plants required for the landscape was, for Nevins’ team, an exercise in careful planning and realization – now followed by the important task of maintaining the forty-acre landscape to a good standard.

Located in an intensely populated district of Athens and open for general public enjoyment, the park serves a diverse set of users and provides visual interest in all seasons. Given that so much of the southern coastal parts of Australia enjoy a quasi-Mediterranean climate, there are important lessons to be learnt from the Niarchos parklands. Each plant is hardy, on-site water collection is significant, and irrigation is used sparingly. Nevins has achieved a remarkable outcome, an exemplar for large urban parks in tough climates.

When in Athens be sure to visit! 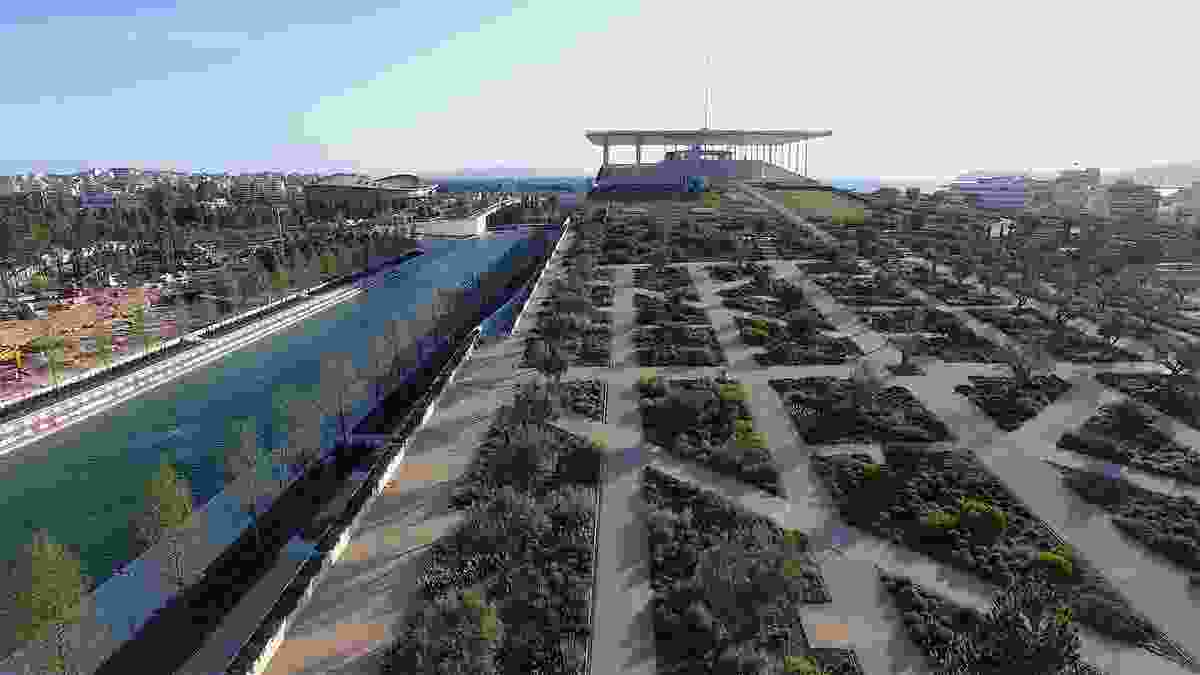 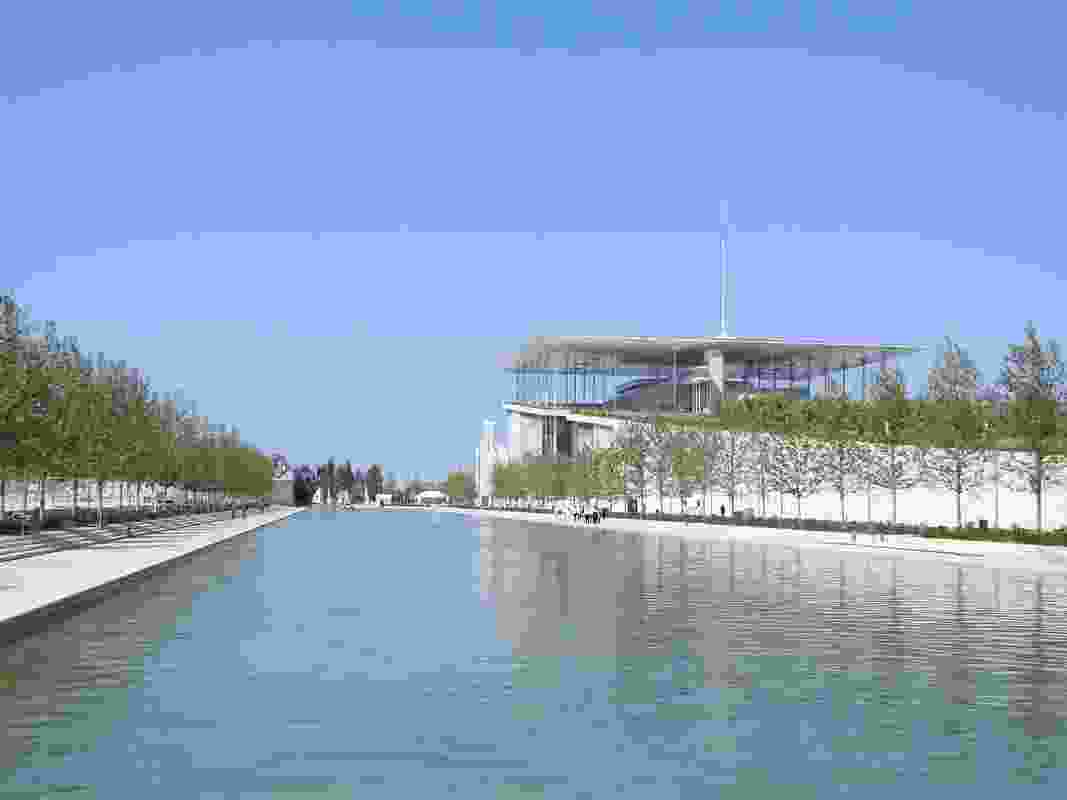 The tilted landform of the Stavros Niarchos Foundation Cultural Centre in Athens. 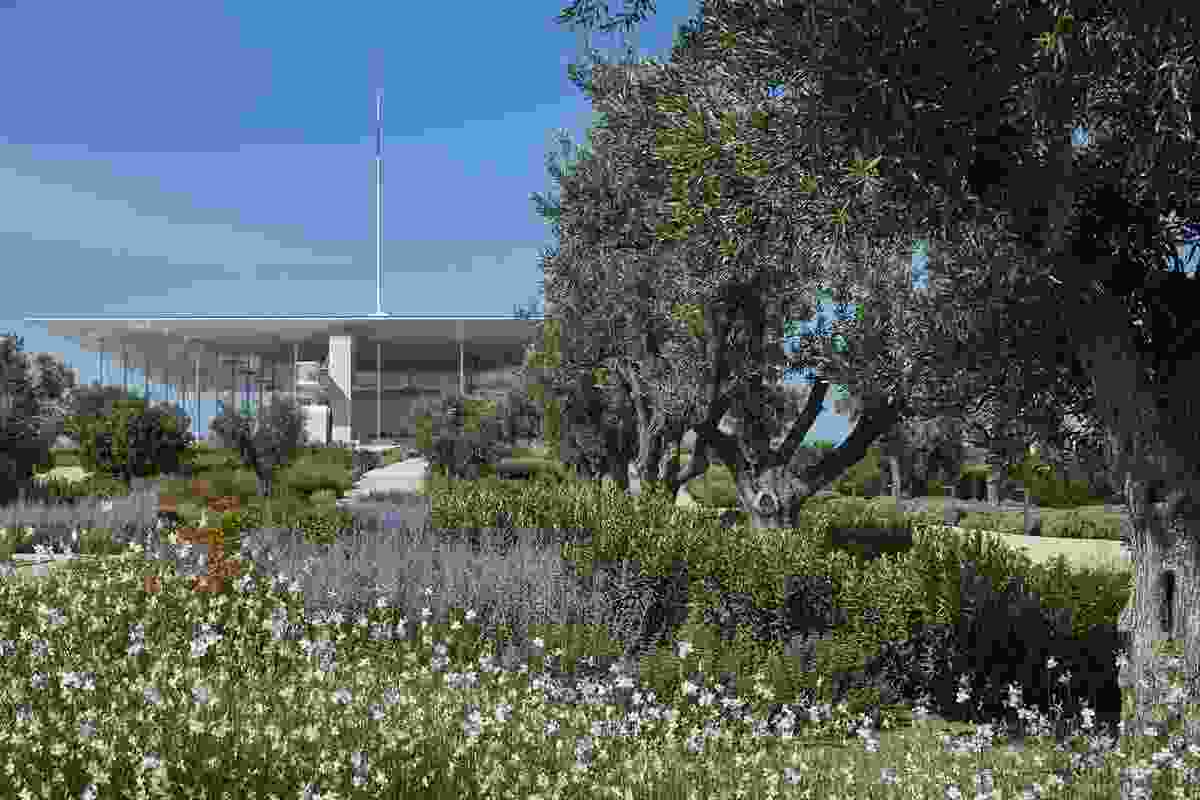 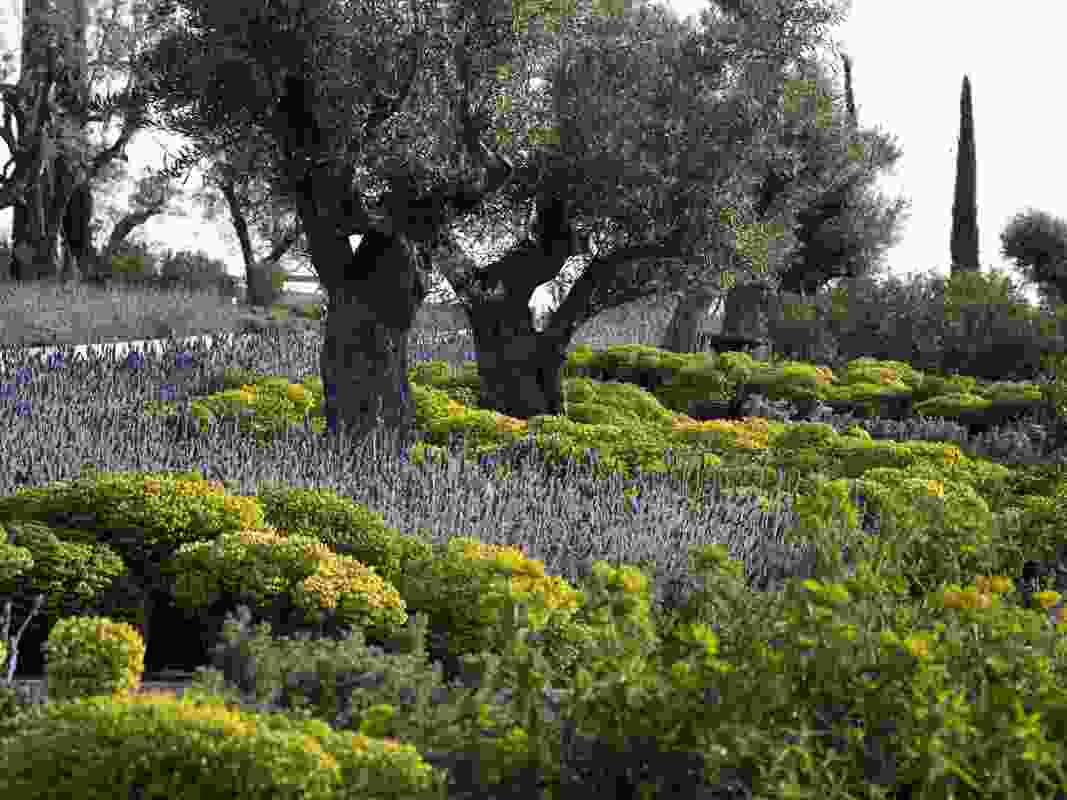 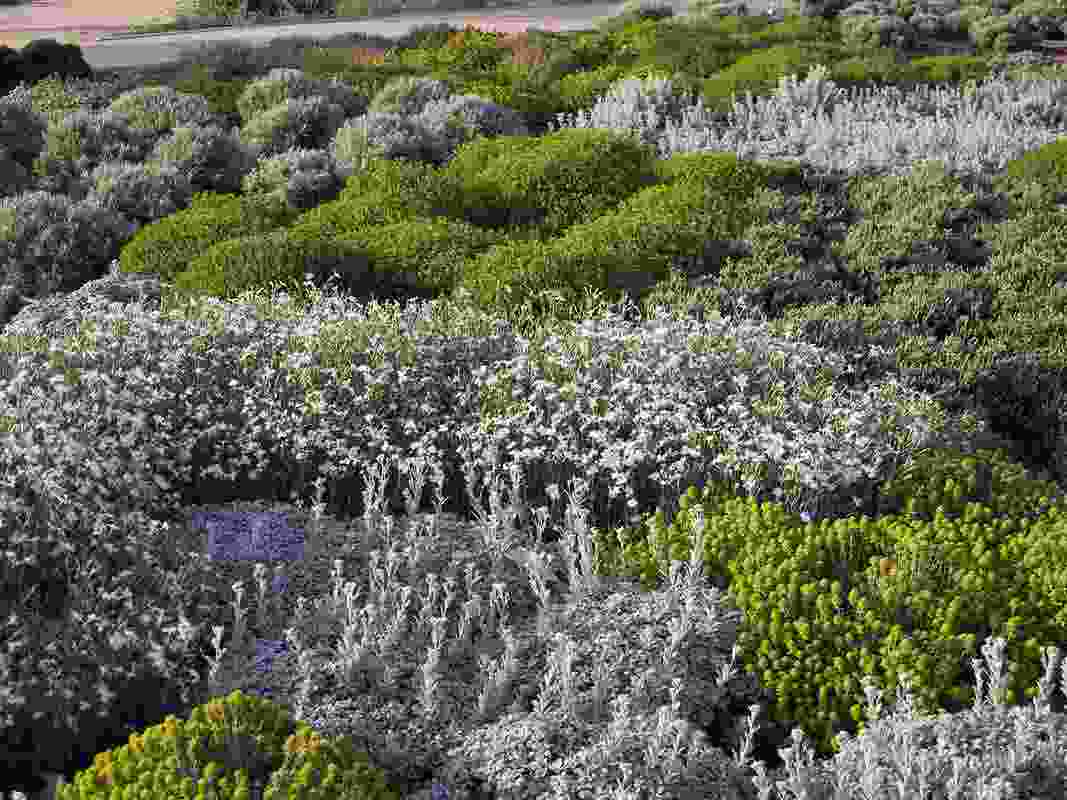 Drifts of scented ground covers and perennials carpet the areas between park paths. 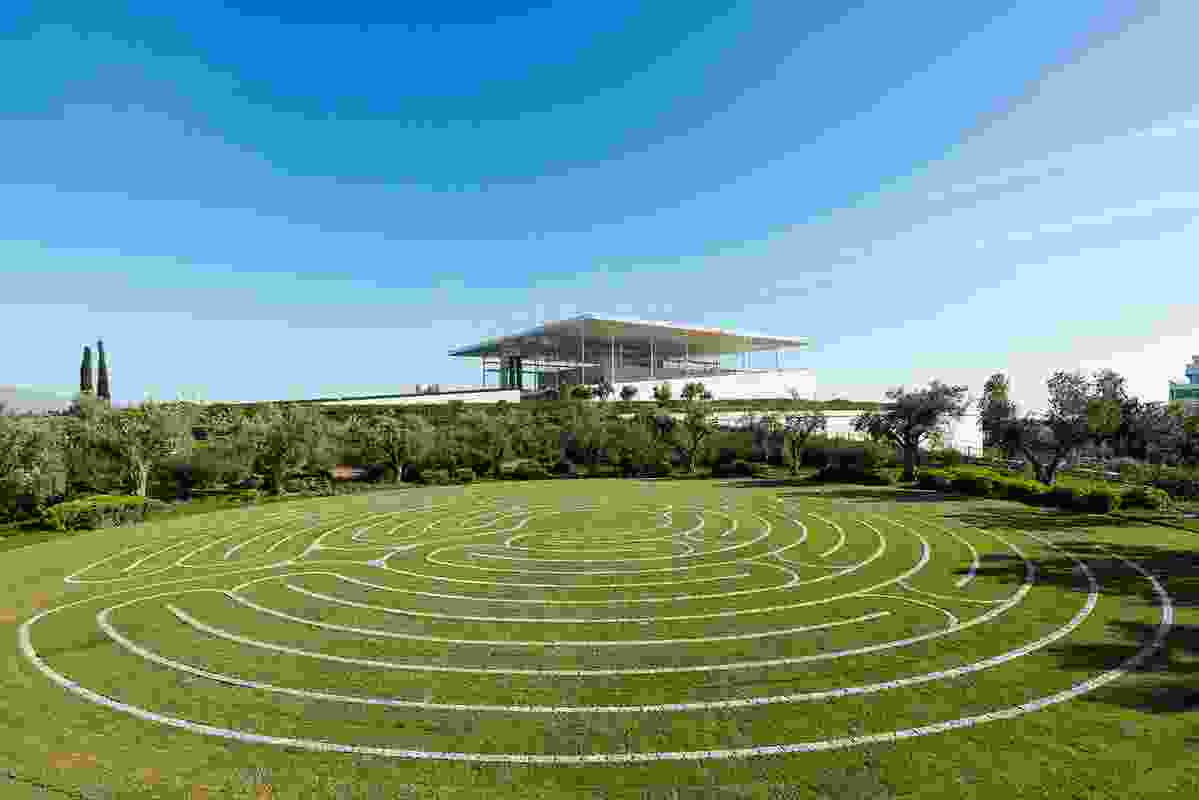 The park includes a lawn for public events, a pine grove of Mediterranean species, an outdoor gym, children’s playground and a labyrinth. 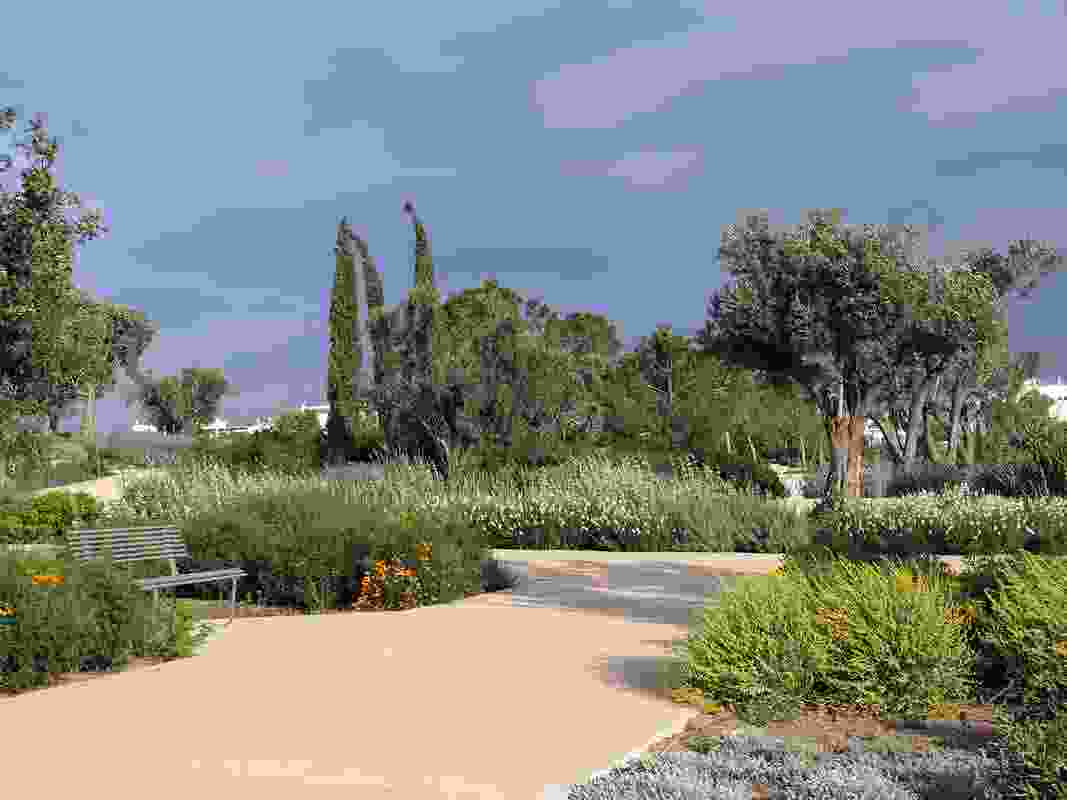 The mediterrean garden is gridded with porous gravel paths; beds between the paths are punctuated by old olive trees and cypress pines.