An extensive pergola-like system of poles with netting over the cultivated beds keeps possums and birds at bay. A free-standing sink in the garden is used to wash vegetables.

A former red-brick housing commission house in the bayside suburbs of Melbourne has been transformed by Mark Dymiotis to replicate traditional village Mediterranean practices of his heritage. For many years, people have come into the garden through the Council of Adult Education and the Open Garden scheme to learn wine making and bread baking and other traditional Greek–Mediterranean everyday food practices. Mark draws on his own heritage and the knowledge of older people, the migrants who brought these practices to this land, about which he has been researching, writing and teaching for over 20 years. The garden is a platform for teaching about healthy and affordable everyday dietary practices.

Mounted on the entrance to the backyard-cum-classroom are the words: ‘Welcome to Simple Living: Environment’s Only Serious Hope’. The handpainted sign gives an inkling of the intended reach of this educational garden in the south-eastern suburbs of Melbourne, Australia. You would come here if you enrolled in a ‘how to’ course about baking sourdough bread, building a wood-fired oven or winemaking offered through the Council of Adult Education and run by the garden’s owner, Mark Dymiotis. Scattered throughout the garden are instructive labels, and a large video screen is mounted in the kitchen. The small spaces easily accommodate classes of around 12 people and have also welcomed hundreds, when the garden was open for display during the Australian Open Garden Scheme, which regrettably closed in 2015. The backyard replicates a traditional Greek–Mediterranean garden, including with food production, winemaking, bread baking and other simple food practices. These were survival skills traditionally practised by villagers around the Mediterranean, the quiet master creators and practitioners of this diet. The garden is a platform for teaching people about healthy and affordable everyday dietary practices, and it is also used to advocate for the common-sense government policies that would enable such practices.

The genesis of the garden comes from Mark’s Cypriot heritage – he grew up in the village of Agros (the name translates as ‘field’). The garden draws on the wisdom embedded in his inherited knowledge. This wisdom is the basis of the garden school where ‘old ways’ are taught for these new times. Mark believes traditional village Mediterranean practices are highly sustainable and can easily be replicated in suburban gardens. He wants these practices to influence both policy makers and members of the public.

As I speak with him, I wonder what it is that makes his place feel so strongly Mediterranean. What is it exactly that has transported the red brick post-war Housing Commission house somewhere else? Heavy shutters keep the day’s summer heat at bay. Dried gourds line the fence. Lemon trees, olives and grape vines are mixed with flowers and vegetables. Wild greens such as dandelion, chicory, thistle, amaranth and stinging nettle, elsewhere recognised as weeds, are encouraged to grow. As I move through the space, I realise the Mediterranean feeling is also evident in the organisation of the garden and house as a continuous series of interior and exterior rooms. The kitchen opens out to a wood-fired oven in a portico on one side of the house. The productive garden is on the other side. The vegetable garden is divided into three elevated platforms with a network of narrow, paved pathways to exclude foot traffic from the cultivated beds. Over these beds, an extensive pergola-like system of poles with netting keeps possums and birds at bay. A free-standing sink in the garden is used to wash vegetables, and a gravity-feed system of pipes from three interconnected water tanks irrigates each bed. A Mediterranean cottage-style front garden features fruit trees as well as a culinary and medicinal herb collection planted and maintained by the Herb Society of Victoria.

Mark offers alternative approaches to what is considered conventional wisdom today, such as the necessity for mulching.

The essential message is that the traditional everyday dietary practices of the Mediterranean culture are essential for human health and the environment, plus they are available to anyone with access to soil, especially to those on a low income. These dietary practices evolved naturally over the centuries yet have been lost in today’s increasingly technologised world, which is becoming ever more removed from the simplicity of life. Mark says a lot of people confuse the
rediscovery of old ways when they call them new ways. For him, sourdough is ‘just bread’. Mark is also critical of the commercialisation of the garden industry where we are encouraged to buy bags of soil rather than work the soil we already have, or to purchase seedlings rather than grow and collect seed. We are not encouraged to value dandelion, chicory, thistle, amaranth and stinging nettles, which grow easily with little water and are delicious, either fresh or cooked and tossed with olive oil. ‘Grandmother’s greens’, as they are known, are an important part of the traditional diet.

Such gardening practices offer an opportunity to grow good-quality fresh food for minimal cost. Sharing of produce also becomes a way of connecting to the local community. As part of building his knowledge base, Mark actively sought out Greek and Italian immigrants, expanding his network and knowledge of the old ways.

As with other Greeks, when it came to food, I went for enjoyment. We never talked about healthy food, nutrients, celebrities or master chefs, and there were no food labels. Yet, as it turned out, we were practising the healthy Mediterranean diet. As with the rest of the Mediterranean people, our parents were the master creators and practitioners of this diet.

Melbourne shares a similar climate to parts of the Mediterranean and experiences the challenges that come from hot, dry summers, evaporation and water shortages. Mark offers alternative approaches to what is considered conventional wisdom today, such as the necessity for mulching. In Cyprus, gardeners cultivate the earth weekly to create a layer of soil with air rather than adding a separate layer of mulch. This method is more economical because it is not necessary to buy in additional materials. Mark says many current practices of gardening education tend towards superficiality. He reports that people ask what kind of soil they will need to import, rather than working with the soil in their gardens. In terms of garden watering, the current policy in Melbourne requires the use of nozzles that are as wasteful as the sprinkler they replaced. Water fed directly into furrows around vegetables and fruit trees eliminates evaporation and minimises water run-off . Mark has devised a simple technique to temper the water pressure by attaching a ‘rug’ or thick cloth to the end of the hose to prevent soil damage.

Mark is also a writer advocating for the value of Mediterranean food practices (Dymiotis, 2015) and an avid contributor to local government policy, because many gardeners feel the direct effects of local policies in their gardens. The daily restrictions on water use in gardens have seen old people restricting their cultivation of vegetables. Possums have also created a huge problem in Mark’s productive garden, and his ongoing battle with the local wildlife caused him to consider stopping production completely. Instead, using his engineering background, he enclosed the vegetable beds and fruit trees in rooms of netting that extend the system of garden rooms across the backyard.

This humble suburban garden in the south-eastern suburbs of Melbourne is both a garden for pleasure and produce and a model from which others can learn. It is a crucible for collecting and disseminating the ‘old ways’ of immigrant Mediterranean communities that transported their local knowledge to a different but parallel climate on the other side of the world. Through this garden, these techniques and practices are shared far and wide to the broader community.

Further information on Mark Dymiotis can be found at www.markdymiotis.com. 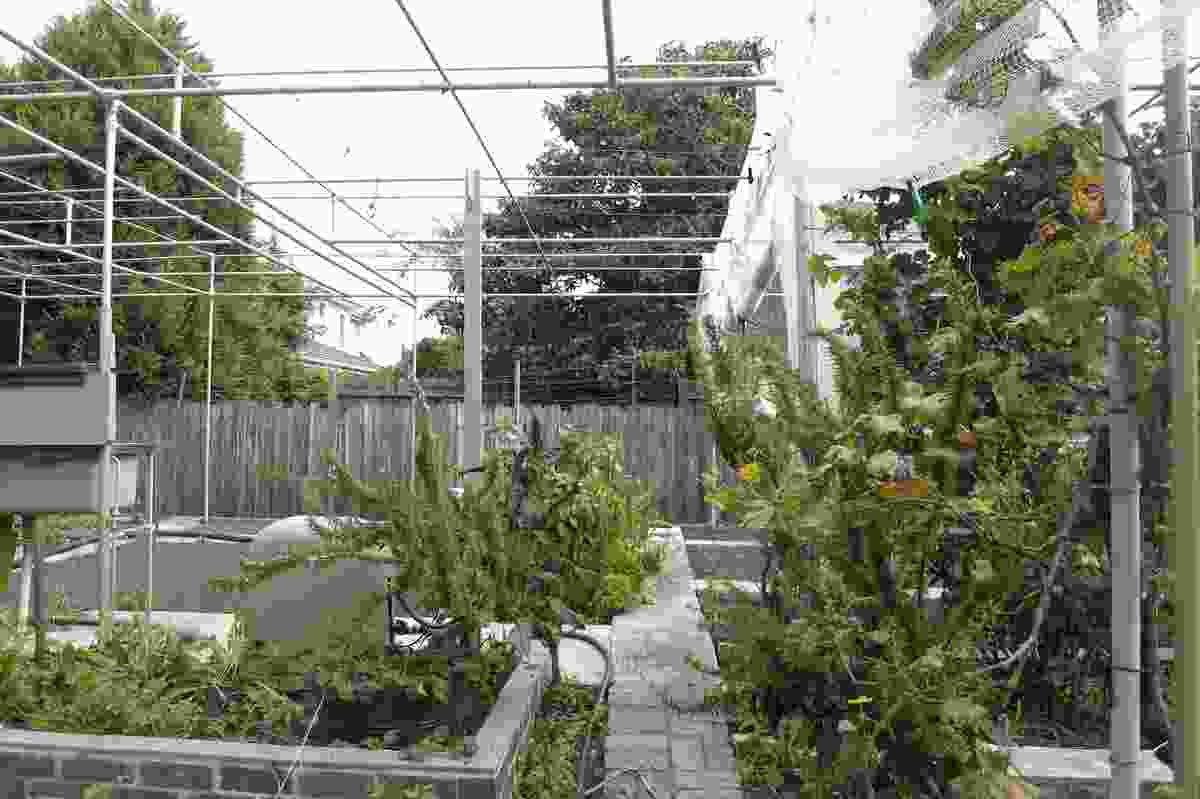 An extensive pergola-like system of poles with netting over the cultivated beds keeps possums and birds at bay. A free-standing sink in the garden is used to wash vegetables.