In 1992, as a young nurse, Deborah Reynolds moved to the then edge of Melbourne with her partner and built what was only the third house in her street. She began to plant a garden: lobelias, peonies, sweet alison, pretty alternations of red and white; an Anzac banksia, a Darwinia meeboldii with stunning black flowers, Scaevola, geraniums, kangaroo paws, the butterfly iris that everyone used to plant (Dietes sp.), Lomandra, Rhodanthe, violas and daisies. She created formal paths and island beds. It was a conventional garden in front of a standard house, with its driveway and garage, on a typical suburban street in a new estate on the city fringe.

Then Deb started going for walks. At the end of her street was a grassland. There she spotted unusual flowers so she bought a book to identify them. Some were rare, some were very rare; amongst them was the critically endangered species Pimelea spinescens. As one thing led to another, Deb acquired specialist understanding of grasslands, a doctorate and a whole new way of gardening.

You do not need a house number to know Deb Reynolds’s place now. Her garden stands out, or spills out, into the street. The nature strip has been colonised by a dozen species of grasses: Themeda triandra, Rytidosperma spp., Dichelachne crinita, Carex tasmanica … and Einadia nutans spreads down the kerb. There is a lot of lignum. A native flax-lily has set abundant seed. The Helichrysum has woven itself into a mat. A Pycnosorus survives under the grasses. There is Pimelea glauca, the more common cousin of Pimelea spinescens. Many other plants are also growing, including Calytrix tetragona, Crowea exalata, Calocephalus lacteus, Eutaxia microphylla, Senecio quadridentatus, Caesia calliantha, Grevillea rosmarinifolia, Pelargonium australe; trees such as eucalyptus, Casuarina, wattles and Western Australian Hakea; and difficult-to-grow plants like Galium tricornutum … It is not a large space, a standard double-fronted block. Deb has grown much of her garden from seed she has collected or purchased from specialist nurseries. It is all messy, in that quintessentially Australian way.

The grasslands of the Victorian Volcanic Plain once stretched from Melbourne to Portland on the South Australian border. We can only imagine their vast and uninterrupted sweep from the little that remains. Until 40 years ago, we did not even know we had wiped out 98 percent of them – Australia may have ridden on the sheep’s back, but the grasslands died under their hooves. The few good fragments that remain can be incredibly biodiverse: from the kangaroo grass tussocks to a rich variety of herbs, lilies, orchids, creepers, lichens and the like. Pimelea spinescens is one of these plants of the Victorian Volcanic Plain. Because of its critically endangered status, it is protected by federal legislation. If you are lucky enough to come across one, spotting it in winter when it is in flower, you may well see it has been tagged and numbered, or if in summer, it may be netted with a stocking to collect its precious seed: that is the work of Deb Reynolds, who is now the pimelea officer for Trust for Nature.

Deb’s garden has followed her discovery of the grasslands of Melbourne’s west.

The suite of species could make the garden an idiosyncratic collection, but collections are for museums, and Deb is a woman very much in the here and now who is creating something altogether more mysterious.

Grasslands are poorly understood; their complex ecology is only now beginning to be teased into knowledge. Deb Reynolds is a pioneer in this work. She understands that grasslands are a state of mind. They change the way you see. A brown paddock of weeds and snakes, a boring monoculture, transforms as you crouch and glimpse a host of species between the tussocks: the twining scramblers, the tiny daisies, the sundews catching their prey. You can observe the slightest depressions that bear their own communities, for instance, those in which lemon beauty heads grow. Pollinators are everywhere.

The garden does its own thing; that is the crux of the matter. Deb does not water. Plants find their place over generations.

Deb observes it all. She sees that the ants in her garden have moved their nest. At dusk, she watches tiny blue-banded bees roost on the silky blue grass. Birds have eaten the Einadia berries and spread them round the garden through their droppings. Native wasps have used sand from the neighbour’s place to make a nest in a corner of the veranda. She points out the hole of a spider. She traces her cat’s favourite positions in the garden. “The cat likes that spot over there, and on hot days over there, and sometimes under the grasses there; it’s like a bandicoot that way,” she notes.

Other people have been encouraged to adopt her way of seeing the garden. The postie is trained to keep his motorbike away from the Chrysocephalum, and Deb has left a dirt track to the letterbox in exchange. Her garden is at the far end of the run-up for the cricket pitch made by the kids across the road. They prune while they play.

The garden does its own thing; that is the crux of the matter. Deb does not water. Plants find their place over generations. Self-seeded shrubs appear and all but one of the gums is a volunteer. The bluebells died out in one spot and recolonised in another. Everything is in motion. Occasionally, a viola or lobelia still appears, but now Deb considers them misplaced and pulls them out. The European garden is being replaced.

Each year, at dusk when it is not so noticeable, on a day with just a little breeze to fan the flames, she burns the grasses.

Grasslands, once disturbed, are vulnerable to weed invasion. Deb is not shy about putting the spray pack on and using herbicide. Each year, at dusk when it is not so noticeable, on a day with just a little breeze to fan the flames, she burns the grasses. She is treating the garden the way a grassland should be treated. Afterwards, she can see what is there, beneath the overgrowth.

Deb is learning through careful and close observation – she is participating. Processes are at work; she might be part of them, but her presence is not the essential element. She understands that every plant has a story, an ecology, a way of living that you have to watch to understand. You create what you love.

Even experts on grasslands rarely understand why a certain plant fails and another succeeds. We cannot name the fungi in the soil, we do not know the foods the insects eat, we do not even know how long a tussock of kangaroo grass might live: perhaps a few dozen years or maybe hundreds. Each Pimelea spinescens is a potentially ancient plant, diminutive on the surface but with a tap root like your arm, plunging deep into the heavy clay soils. Despite her familiarity with them, Deb has not managed to grow one yet in her own garden.

Deb’s house is on land that was once grassland. Banchory Grove Reserve is the remnant at the end of the street. She regrets not salvaging the Stackhousia that grew there or at least collecting its seed. It has all gone, now that the grassland is in decline. “Extinction debt,” the ecologists call it, the consequences of our past actions that will inevitably unfold.

Grasslands are a state of mind. Deb’s grassland garden poses an evolving question that does not require an answer. 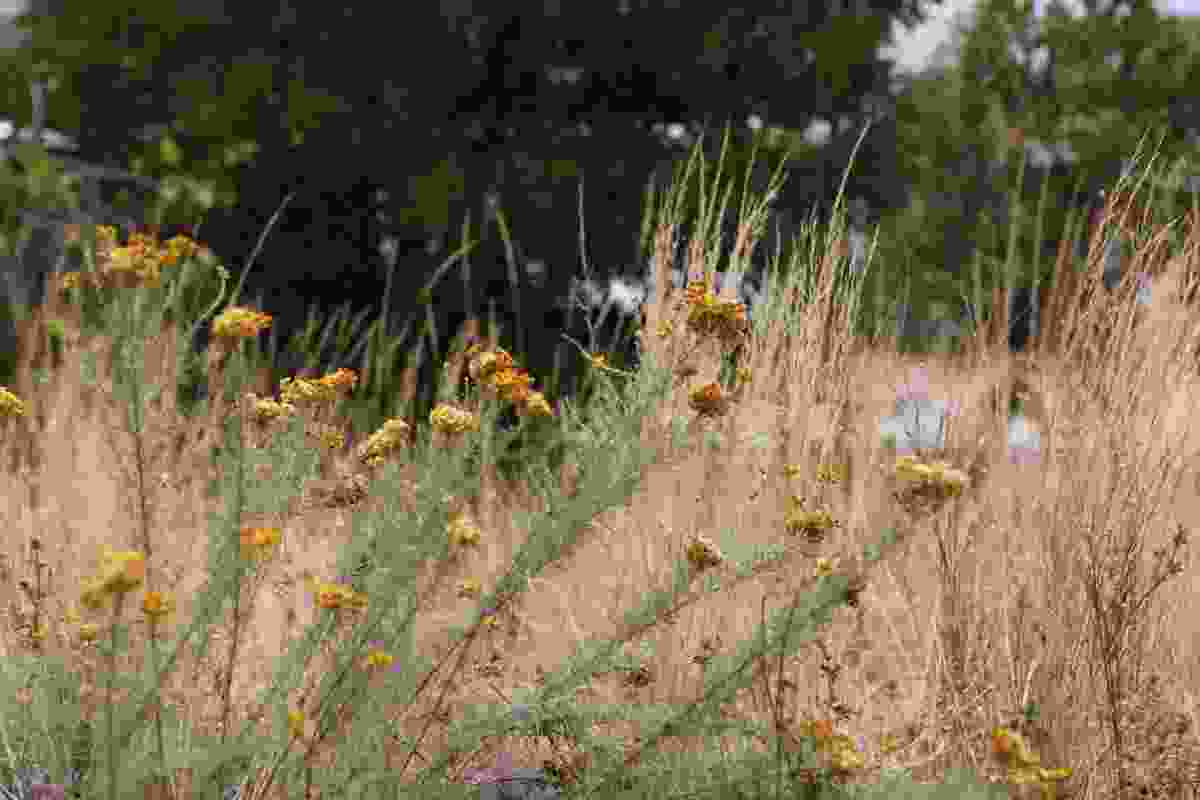 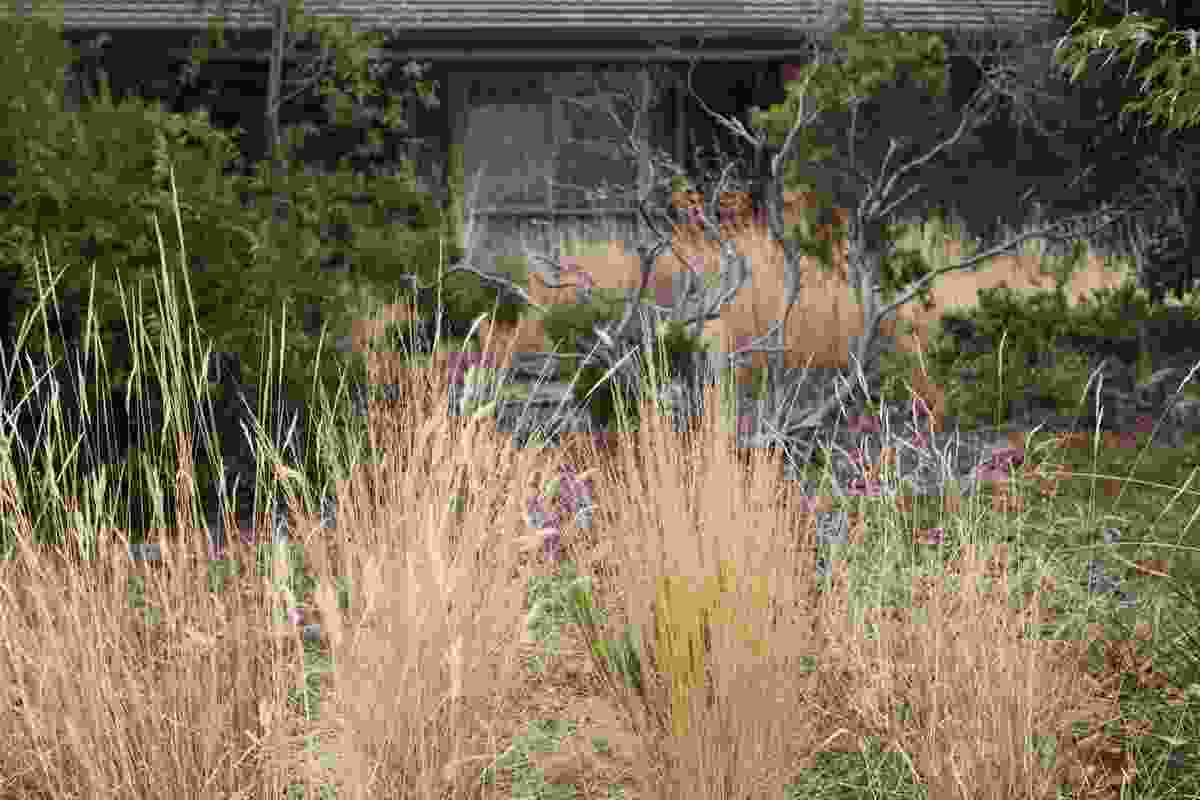 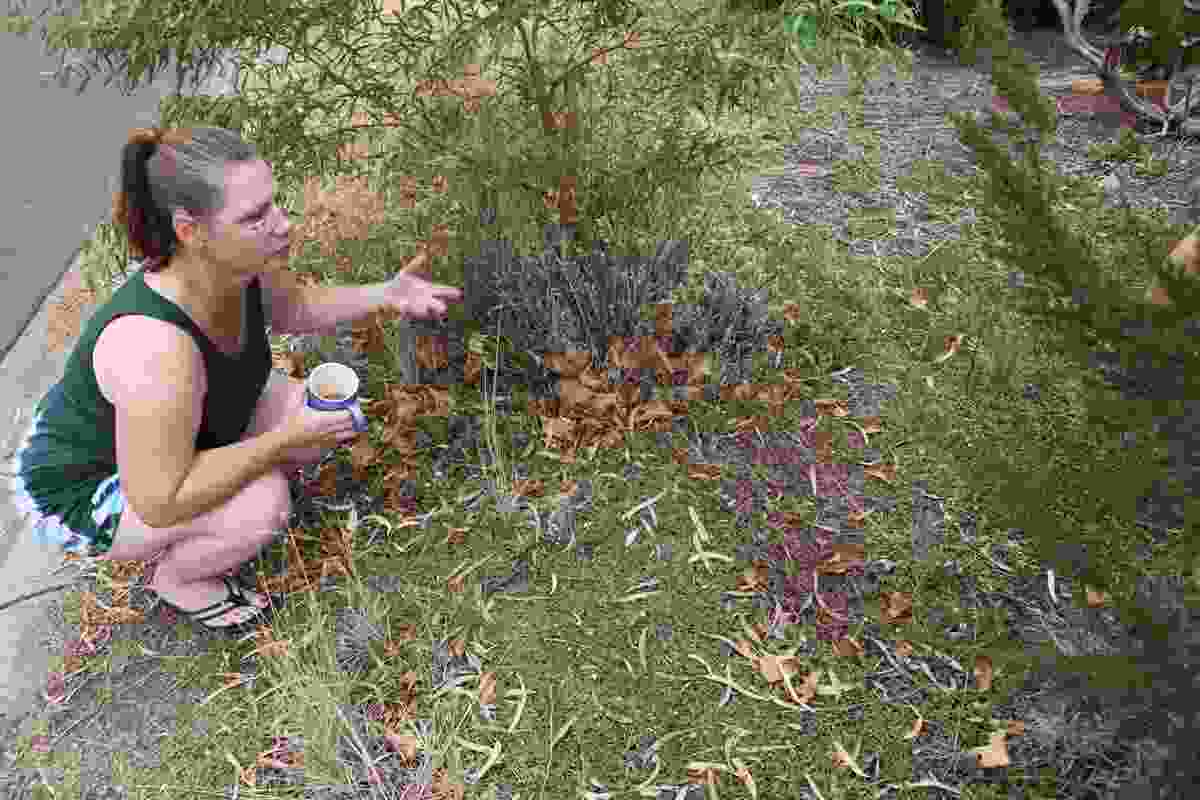 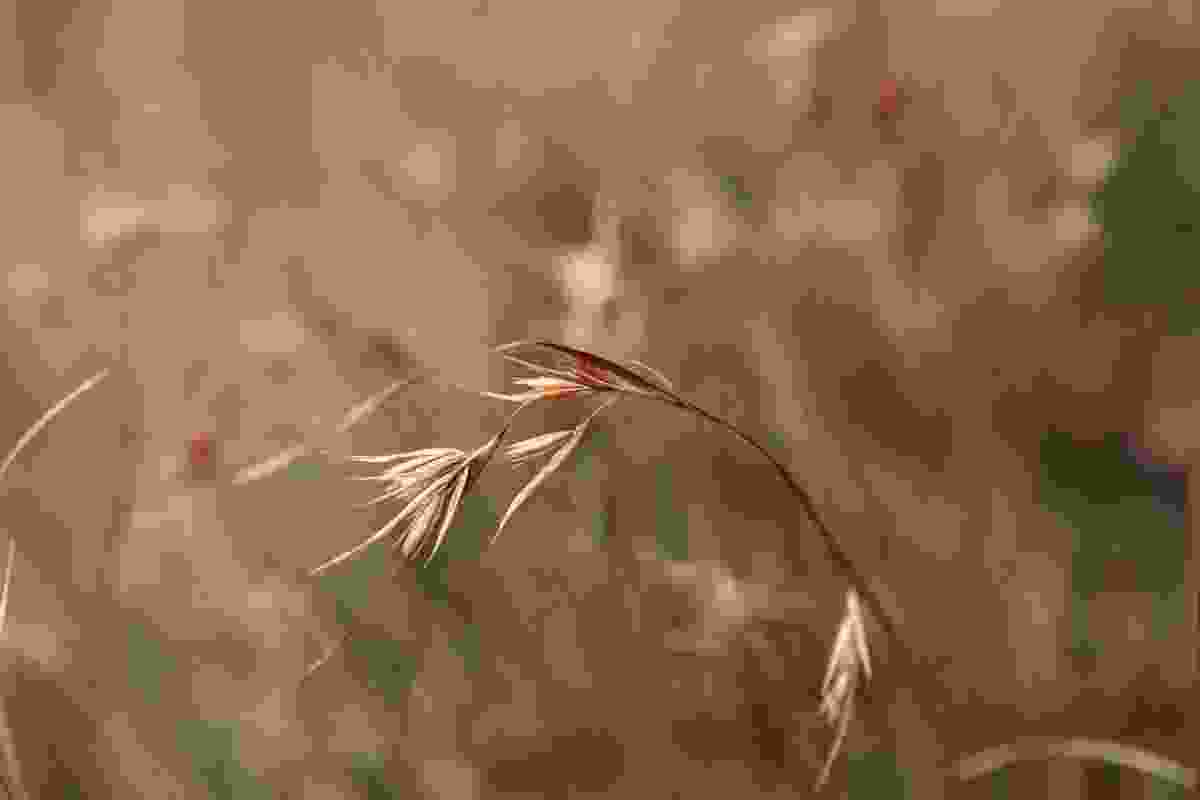 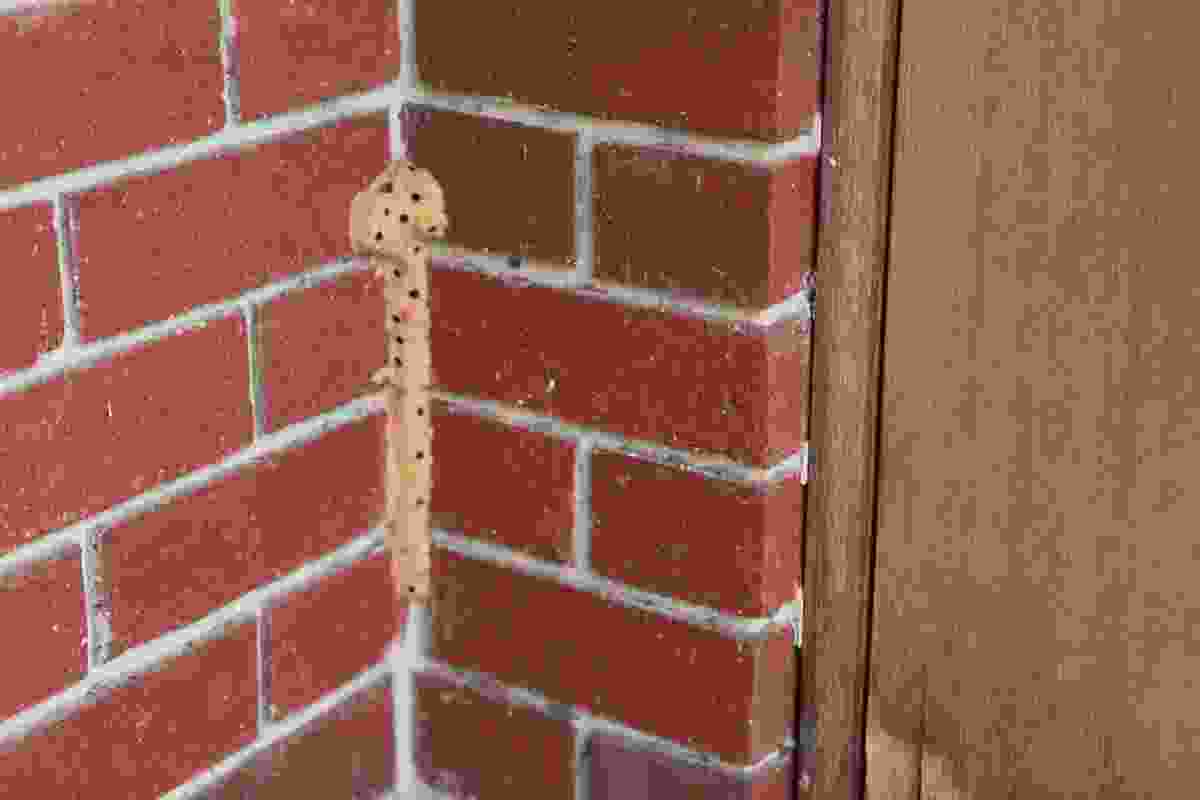 Native wasps have used sand from the neighbour’s place to make a nest in a corner of the veranda. 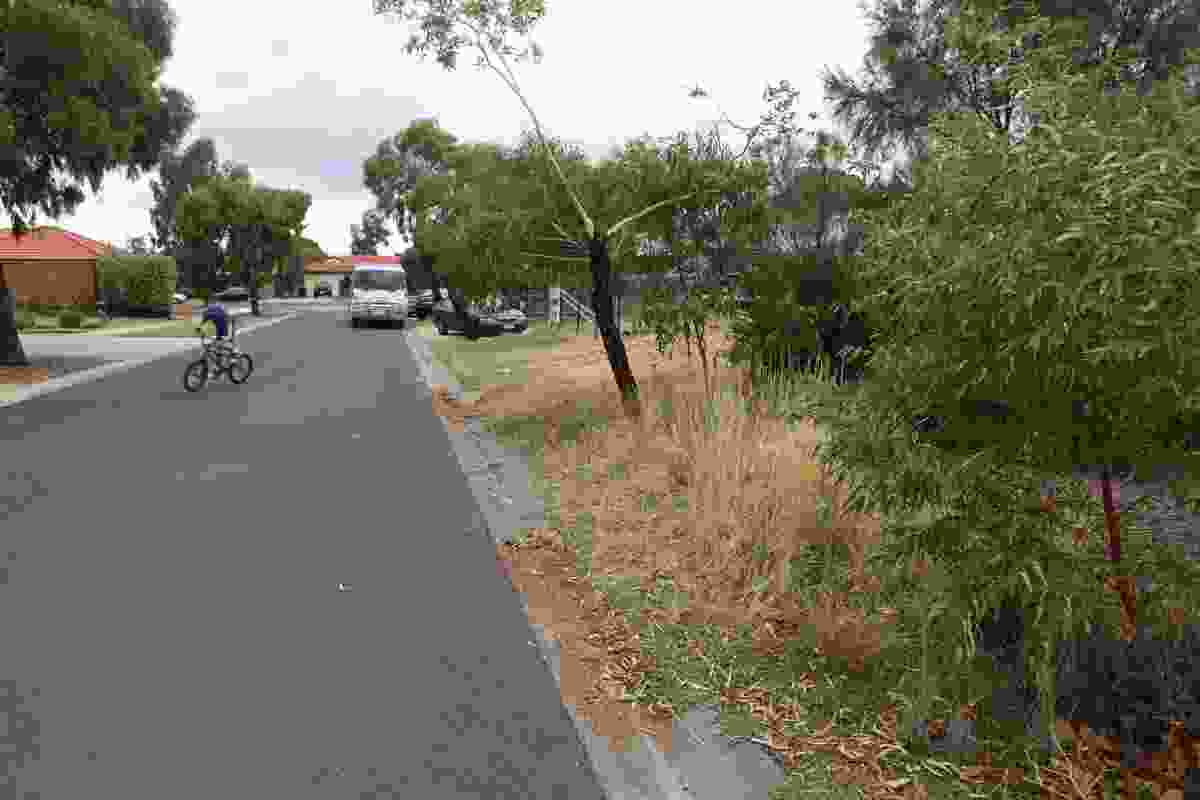 Deb’s garden stands out, or spills out, into the street.