A new civic square in the heart of Melbourne’s second centre Dandenong offers a welcoming and intimate space to its diverse community.

Splashes of intense colour enliven the space as seen from the air.

On a bitterly cold winter’s day, wandering a new public square isn’t my favourite activity. Often exposed despite best efforts at place making and amenity, the public squares that I’ve visited recently are bleak places in inclement weather. These have mostly been in London, products of that city’s extensive urban renewal exercises of the last few years, with some completed in the lead-up to the Olympics and others, such as the King’s Cross Granary Square, stranded in a sea of ongoing construction. London being the city it is, most of these spaces are designed to accommodate large numbers of people and changing events, and Granary Square is no exception, so visiting on an “off” day can feel quite desolate.

A thicket of araucarias, visible beyond the distinctive lower-level Lonsdale Street entry to Rush\Wright Associates’ recently completed Dandenong Civic Square, is a sign of something different. This isn’t a plaza of the bare and spare variety, nor is it a formal space despite the expectations the typology invokes. It is, instead, a surprisingly welcoming and intimate space, even on a cold and windy day. Splashes of colour in both landscape elements and Lyons’ buildings enliven the space and while this is a tactic that can sometimes verge on gimmickry, here it instigates a relaxed and approachable feel to what could in other hands be a more stilted affair.

This approach goes straight to one of the first questions that consideration of this project raises: what is the nature of civic space now? In other times and places, the civic square has been the meeting place for the populace and its primary institutions. Think of the formula of the Italian piazza, with two sides given over to government and the church, and perching spaces in between – a form that combines secular and spiritual authority, with the everyday space of life introduced by use. In contrast, the epitome of civic space in Australia would be the Parliamentary Triangle in Canberra, replete with symbolism and highly regulated in use. In Melbourne, the civic so often overlaps with the ceremonial; I’m thinking here of the Shrine of Remembrance. Again, it is highly formalized and strictly regulated. Our State Parliament lies on an intersection without a dedicated forecourt, and our much-maligned City Square – well, that’s simply commercial and has arguably lost any claim to the civic. Federation Square stepped into that role and we’ve largely embraced it, but can it be “civic” space, when it is privately managed?

So what of Dandenong Civic Square, the “heart” of the second centre of Melbourne? According to the documents released by (then) VicUrban and state and local governments back in 2006, the Civic Square is to provide for events, gatherings, diversity, art and culture. At that stage its location wasn’t clear, though its importance was. In a strategic sense it is a critical site for the broader revitalization program that has been underway for some years, particularly for the new pedestrian spine linking the commercial areas across Lonsdale Street to the station. Located midway along this thoroughfare and cater-corner to the old town hall, the council chambers, library and civic square complex acts as the hinge of this axis of the refashioned public realm and helps to bridge the barrier imposed by Lonsdale Street.

All of which coalesces as a large and complex task for the design of the square. Infusing the symbolic and cultural into the new is notoriously difficult, despite years of place making rhetoric. We could all name projects that have sought to manifest “culture” and missed the mark entirely. Interestingly, what Rush\Wright has done here is to begin that process of accretion by which a public project makes its way into public affections and develops as a cultural site, but without stridency. It has included obligatory references to the locale and the resident community, working with Paul Carter of Material Thinking to develop the design for the main paved surface, but without resorting to cliché. The device of working the pattern through the drapery of fabric isn’t readily distinguishable to a pedestrian – perhaps it is more clear from the upper levels of the buildings – but what it does achieve is a pleasing ready-made patination. Sections of brick-laid paving mark the entrances to the square and reference the old Dandenong.

This is a community that does colour. And colour in this setting really does establish an immediate informality that’s in satisfying tension with the more sober typology.

Pragmatically, the square is both a destination and a thoroughfare. With the council chambers and the library facing onto the square and the government services building adjacent, constant foot traffic at different times of the day and night is assured and was in evidence when I visited. Circulation is logical, with multiple entries, most at grade, and access from the Lonsdale Street entry plaza via stairs or lift. The square is well designed for events and had its first outing in that role with the opening some months ago. The screen by the small retail building (yet to be fitted out) and its adjacent viewing area provide a focus to the north of the square. A copse of nine Araucaria columnaris gives definition and volume to the centre of the space, creates intimacy and allows clear visibility for safety. Large umbrellas can be laid out on a gridded format to provide both shade and shelter, which should make white pop-up marquees at least partially redundant. The colonnade of the library provides permanent shelter, only lacking the temporary seating that may yet appear. And while the orange seating/planter units seem a bit “beamed in,” I understood that this is a matter of personal bias when I saw photos of the opening. This is a community that does colour. And colour in this setting really does establish an immediate informality that’s in satisfying tension with the more sober typology.

One oddity of the space is the grassed north-west corner. Graded so that it’s easy to imagine families picnicking and sizeable enough for kids to play, it brings the backyard to the civic. It does, however, look and feel temporary. It’s not surprising to learn that this is in fact a separate parcel of land, still owned by Places Victoria and originally ear- marked for commercial or retail uses. Early in the design process Rush\Wright made the case for this to be included in the public realm, on practical as well as symbolic grounds, and while this remains unresolved, the area also remains unbuilt for the moment.

This is a good space to be in, with a comforting sense of enclosure and of being somewhere. Given the nature of this type of project, the intricacies of local politics and finances, and the integral involvement of a government agency in turmoil, this could easily have become one of those anywhere/nowhere places. It’s to the credit of those who have worked on the design that it is instead engaging and local, informal and yet with the presence required of a civic space. 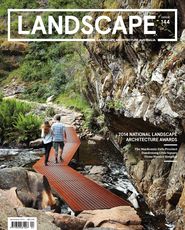 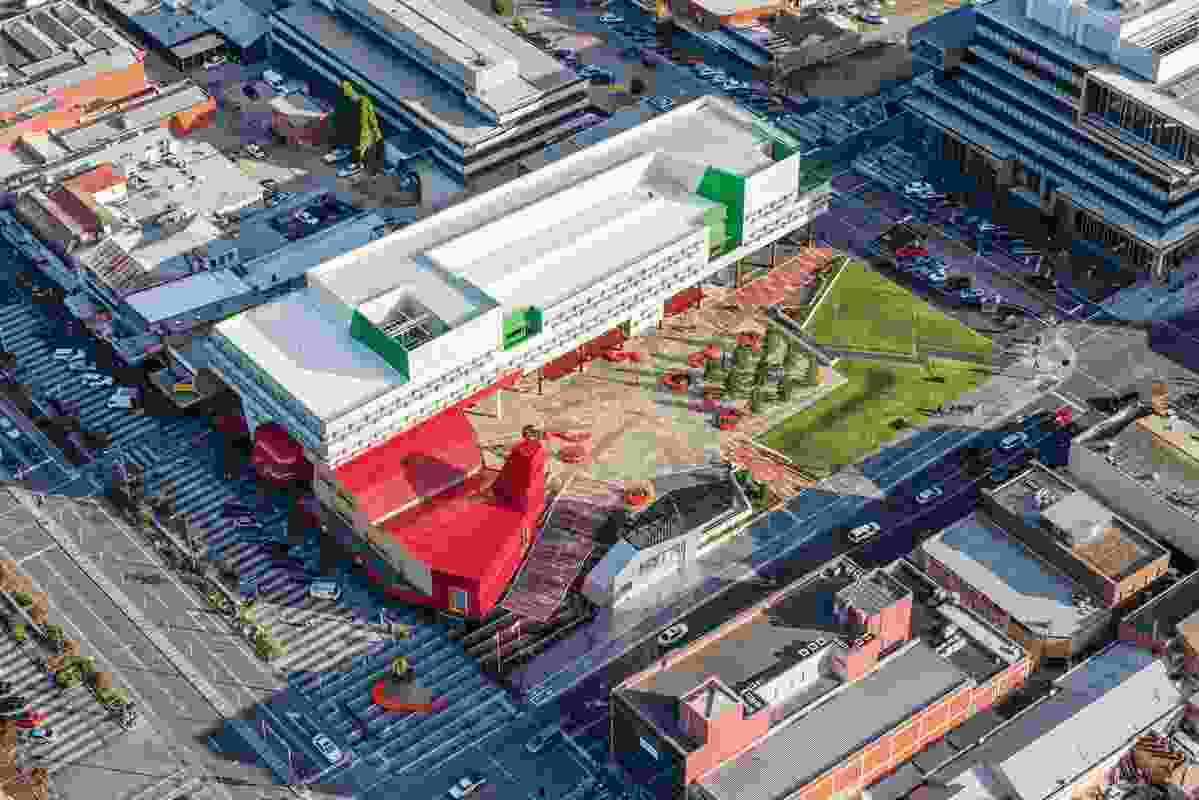 Splashes of intense colour enliven the space as seen from the air. 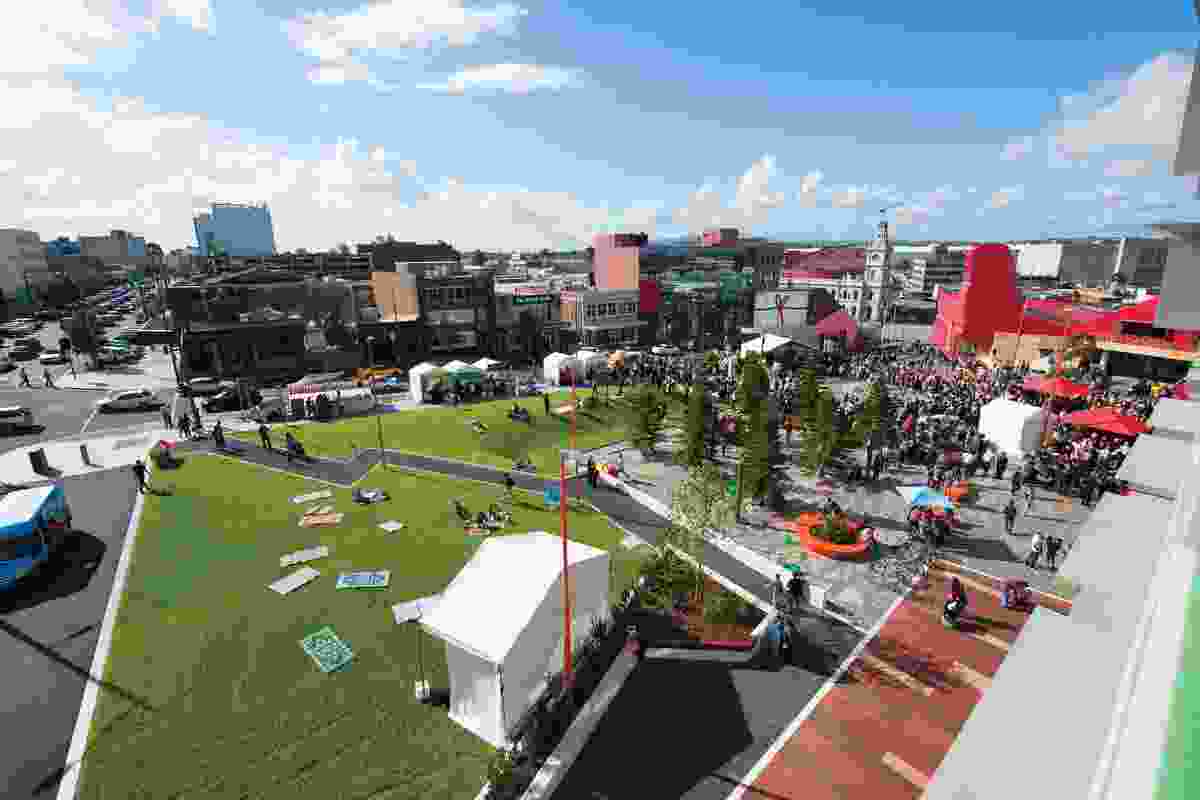 The square provides for events, gatherings, diversity, art and culture. 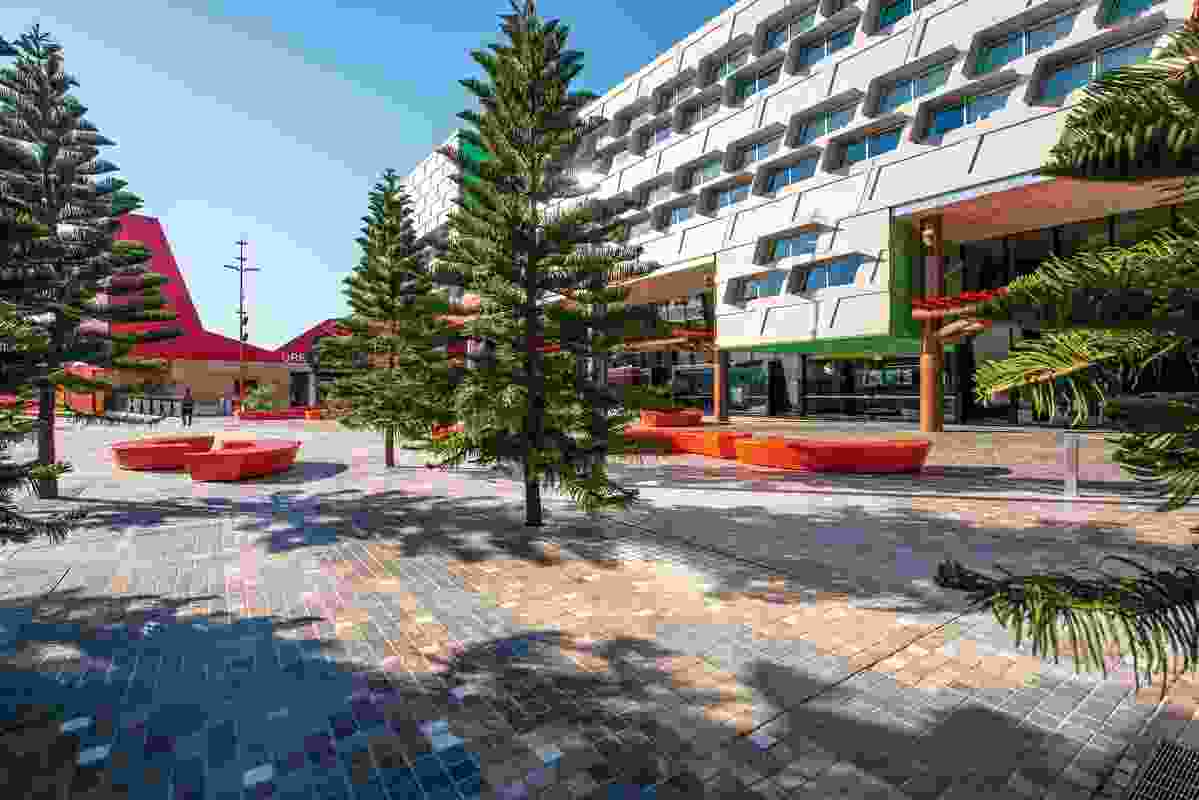 A thicket of araucarias offers shade and intimacy. 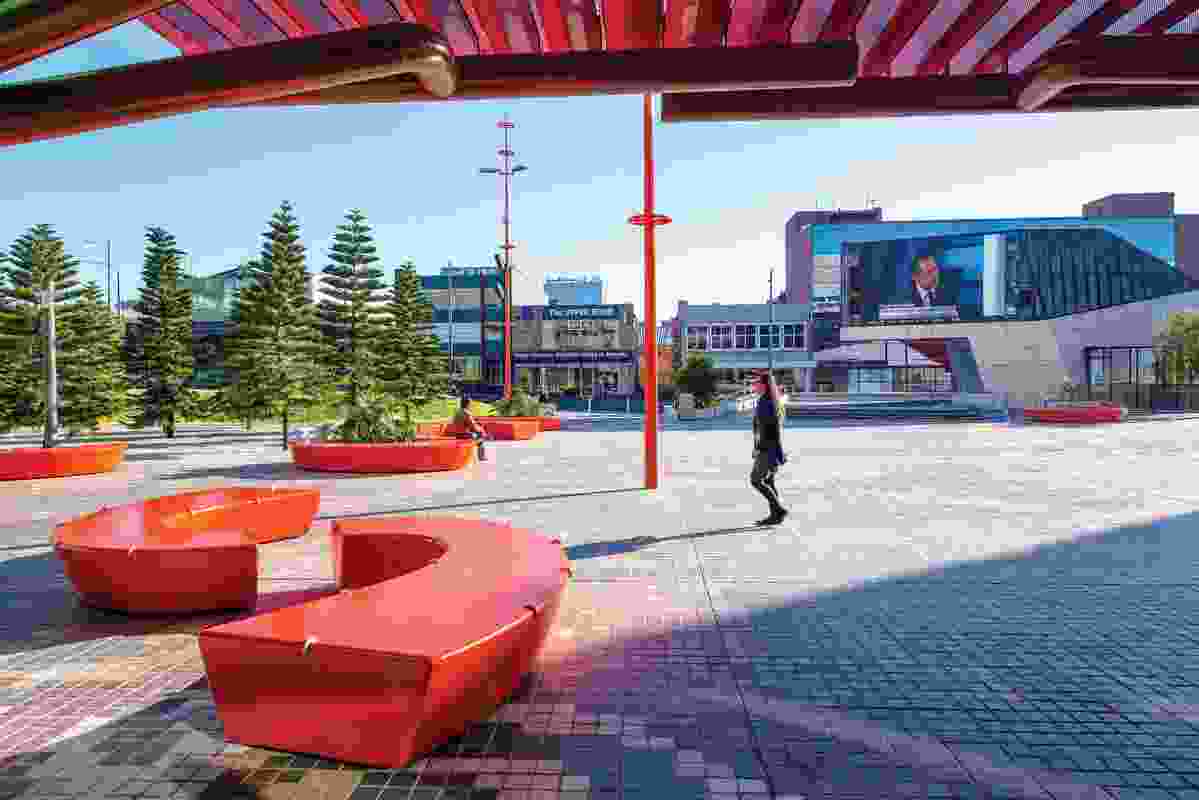 A large public screen stands at the north-eastern corner of the square. 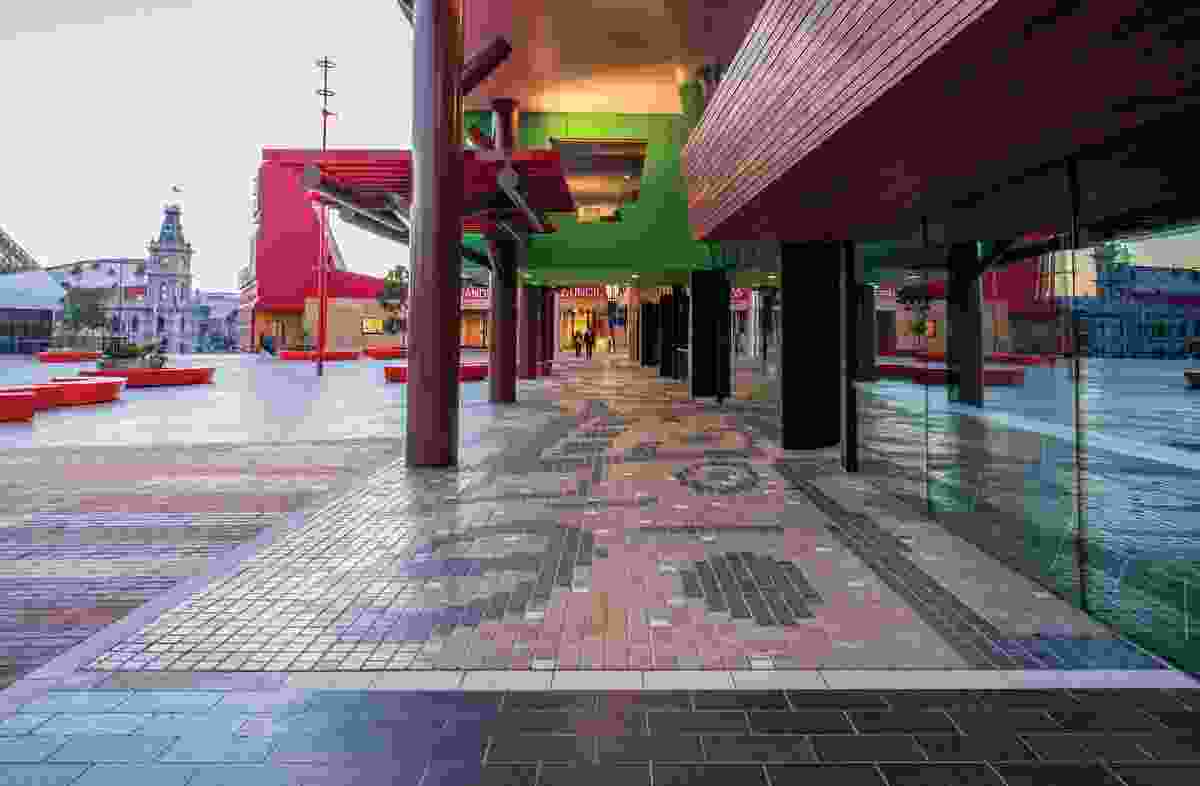 The colonnade of the Lyons-designed library provides permanent shelter. 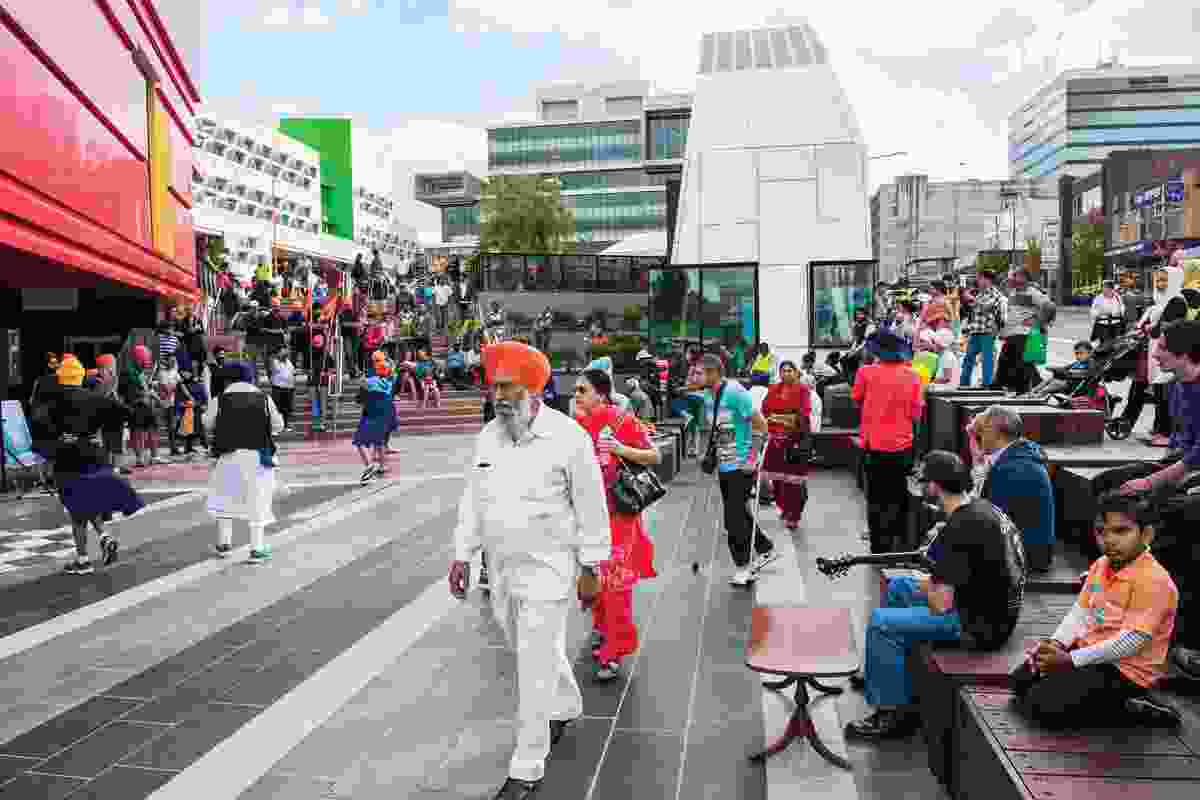 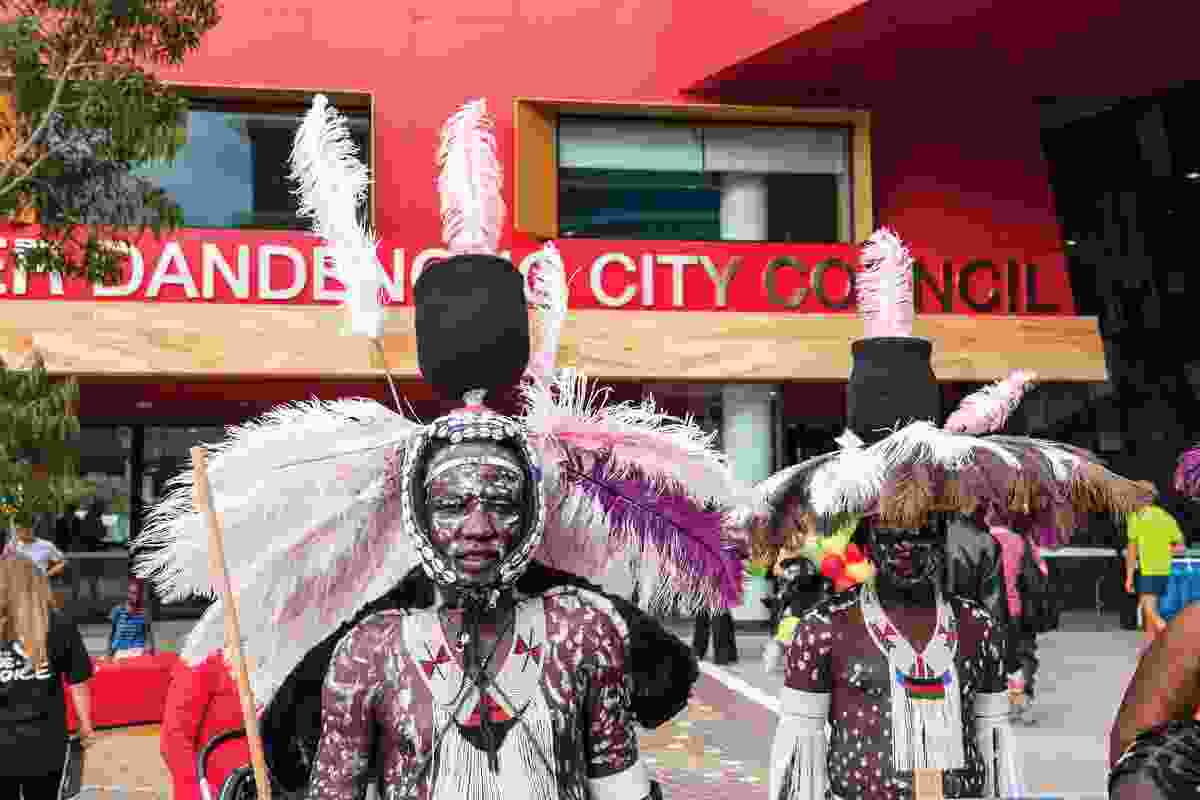 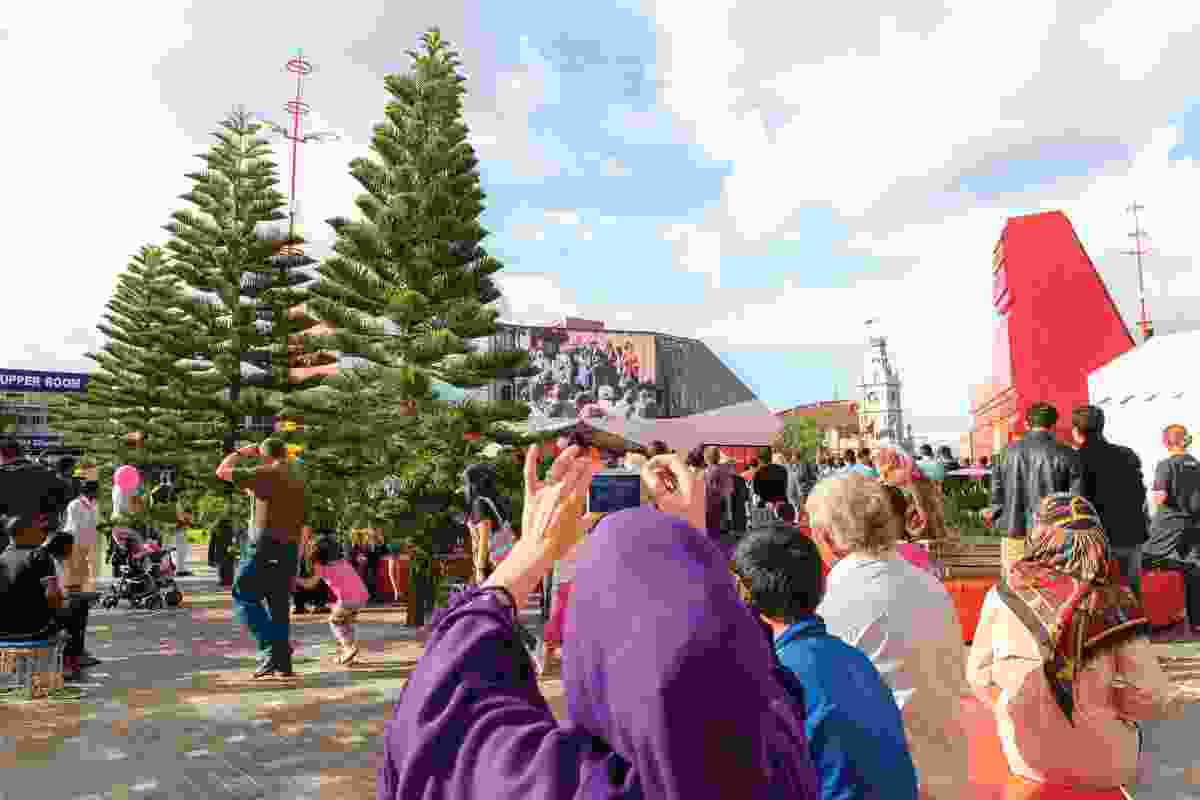 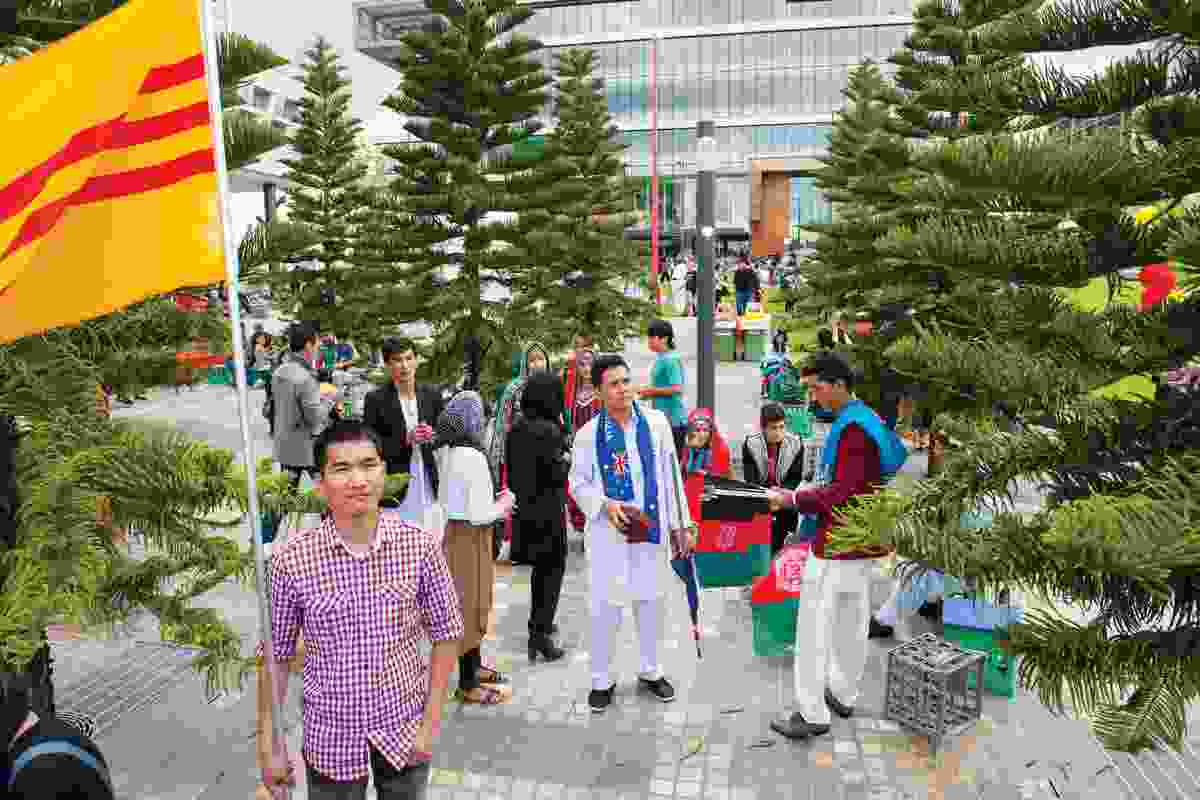