Ahead of their Repair exhibition in the Australian pavilion at the 2018 Venice Architecture Biennale with artist Linda Tegg, Melbourne-based architects Baracco and Wright have designed a multidisciplinary exhibition currently being held at the RMIT Design Hub.

Conceived and curated by Madelynne Cornish and Philip Samartzis on behalf of the Bogong Centre for Sound Culture in collaboration with RMIT, the exhibition, Super Field, “invites audiences to journey to some of the world’s most remote environments” from the comfort of two gallery spaces in central Melbourne.

Artists from France, the UK, Germany, Ireland and Taiwan have been involved in the creation of four distinct audiovisual programs that explore the Australian Alps, the Kimberley region in Western Australia, the Arctic and Antarctic, and other remote wilderness areas around the world.

Speaking to ArchitectureAU, Louise Wright of Baracco and Wright said, “The challenge was to make a space that enhanced that experience, but didn’t suggest that what we had done was the artwork. That was something we had to be careful about.

“Anything that you do, even lighting, could be considered artwork.”

The challenge was compounded by the fact that the architects began working before the full range of works had been commissioned. “Our response had to be something that could work with a range of works, not just one work.”

The exhibition is divided into two parts – one aural, one visual – which are each housed in two separate spaces.

In the larger of these, 60 speakers enclose visitors in an cocoon of sound that the architects hoped would enhanced the experience of the “big scenes” assembled by the artists, which include, for example, “a sound recording of a blizzard in Antarctica that is meant to be the strongest ever recorded,” Wright said.

“We suspended the speakers above your head to create this presence above you so that it would be physically quite dominating and a little bit uneasy.”

Separating the speakers and the visitor is a vast sharkstooth scrim that is opaque when lit from below and translucent when lit from above.

Wright explains, “When it’s lit from one direction it’s solid [and] you get a real sense of something weighing down on top of you. And if you light it from behind you can see through it to the speakers and it’s quite ephemeral.”

While most of the speakers are suspended from the ceiling, others are hidden in the walls and a “bulge” in the floor, which the architects added.

“We made a raised floor, like a mound so you can stand on that and at a certain moment, depending on the arrangement of the moment, there’s sound at your feet and your head.”

The video works are housed in a deep, traversable space that was “kept […] pretty simple because the works are so visual themselves,” said Wright.

The videos are projected onto a cluster of screens arranged in the narrow space that allows visitors to view a number of works simultaneously.

Echoing the sound space, the biggest architectural intervention in this video gallery is a “sort of lump on the wall.”

“It looks as if something is behind the wall pressing out into the space. We’re interested in that otherworldly quality of something behind, something else.

“You have to walk past it. It’s quite weird. It’s charged.”

Madelynne Cornish, of the Bogong Centre for Sound Culture, said that when consulting with the designers she sought an explorable landscape for the video area.

“With the moving image it’s about walking through environments, as opposed to looking at a video on a wall,” she said.

“It was really important to me that people are able to traverse the installation as they would a landscape. Some of the images are close up, they surround you, and then at times you come out to wide, open areas.”

The exhibition closes on 17 February. For more information, go here. 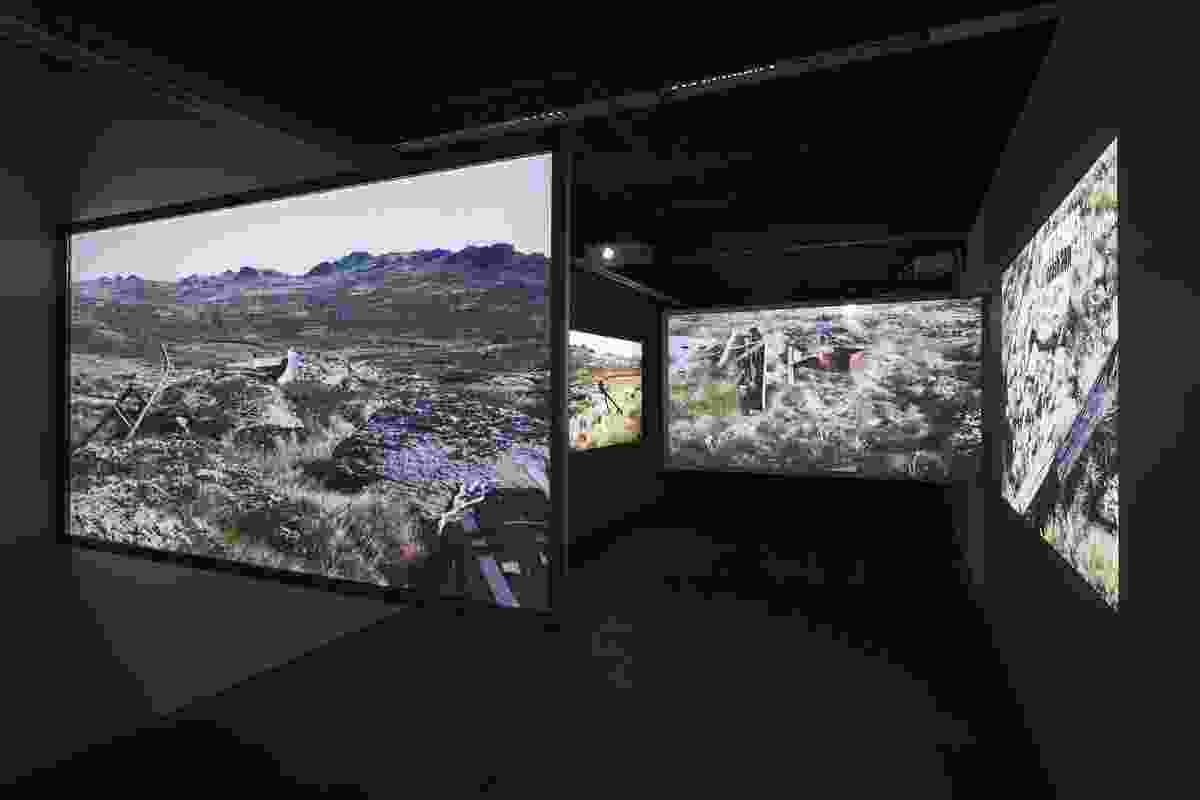 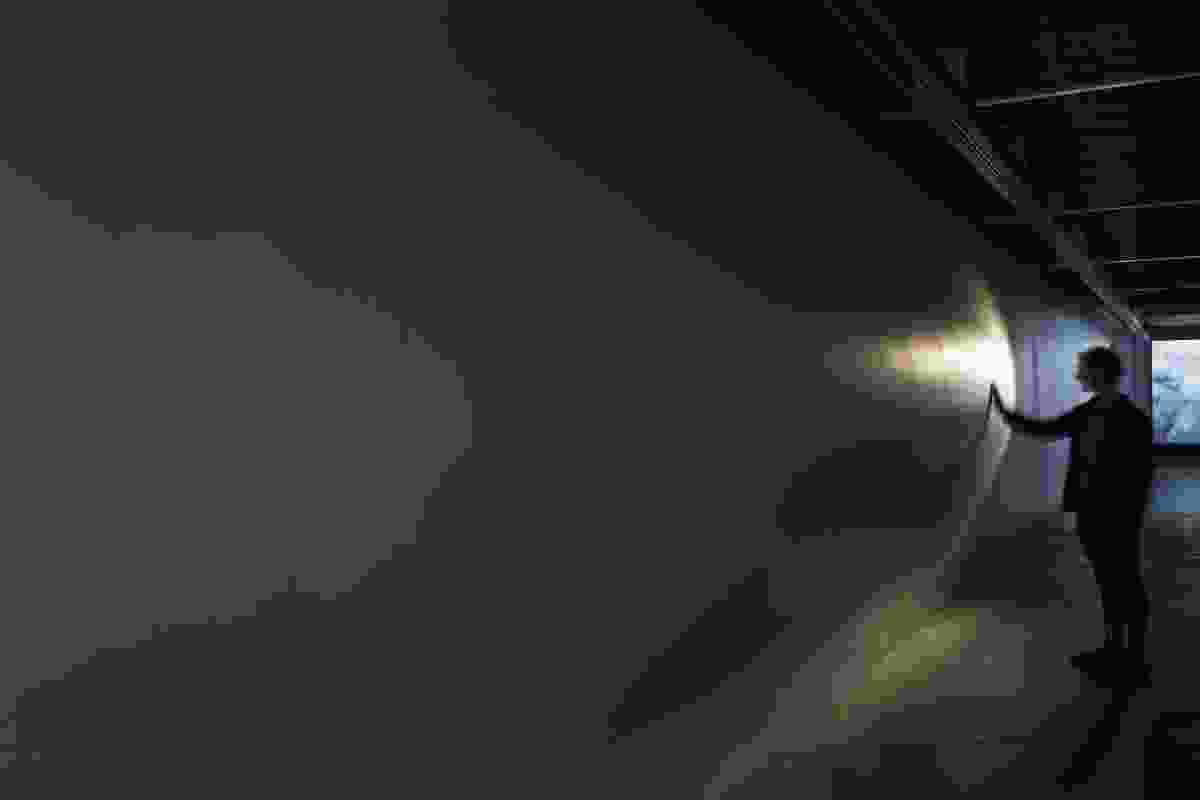 The “lump” that protrudes into the video space is intended to evoke an “otherworldly quality of something behind” the gallery wall. 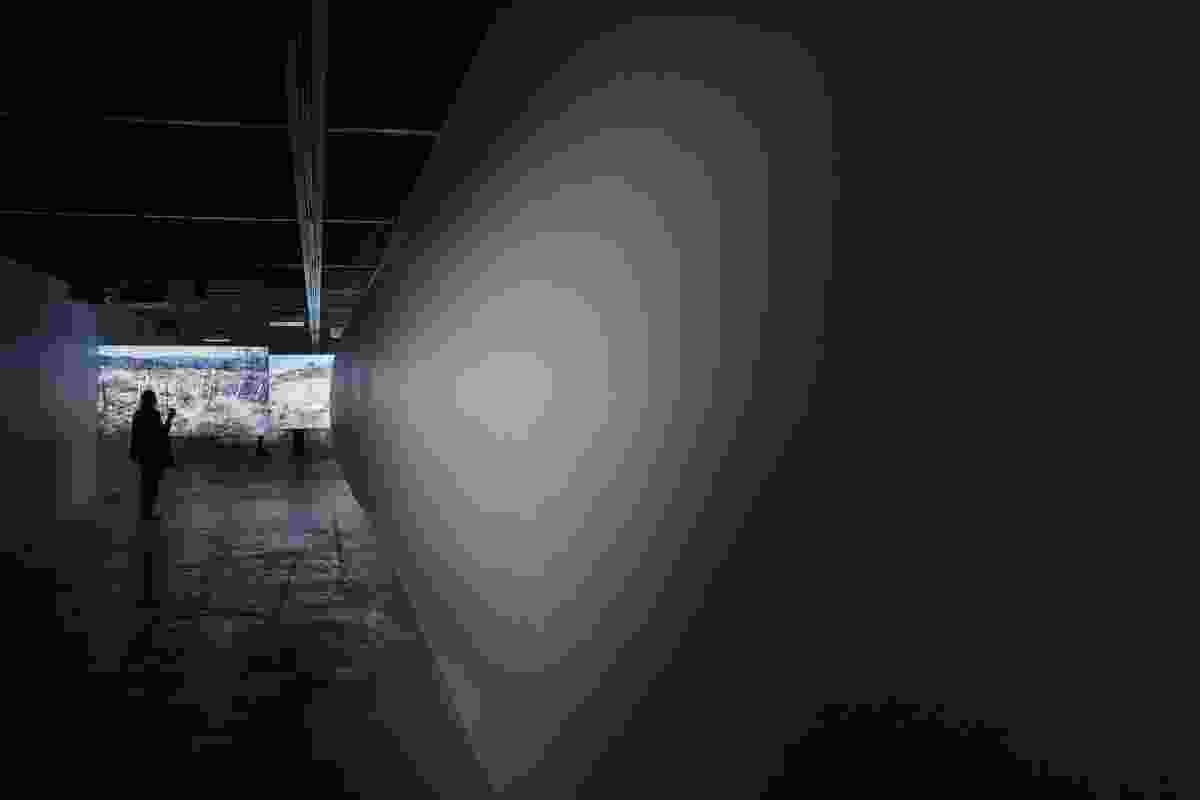 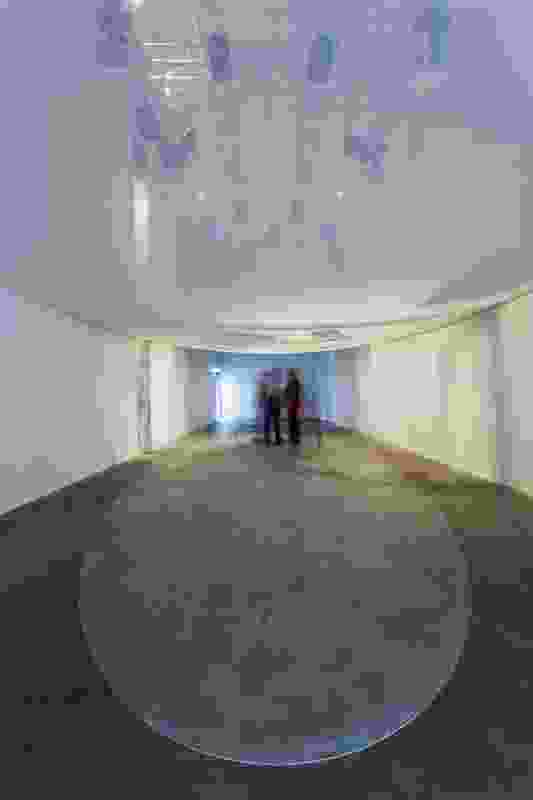 Sixty speakers are either suspended above visitors or concealed in the floor and walls.