Walter Hood of US practice Hood Design Studio and the University of California, Berkeley, spoke about agency as the freedom to act.

“What is your intention for being here?” N’arweet Carolyn Briggs, Boon Wurrung senior elder and chairperson and founder of the Boon Wurrung Foundation asked as she welcomed us to Country on that cool, autumnal Melbourne day. She called on us, the audience, to step away from “unreliable sources and books,” and learn from our environment by engaging with it through our senses. She reminded us that we, as designers of place, are “shaping culture, engaging and informing [it] and celebrating and protecting [it].” But, she continued, “I don’t see me in the city” – a phrase that has stayed with me ever since. While having heard the sentiment shared before, this was about context, about listening in a room full of hundreds of people who through their various engagements with the built environment have the remit and opportunity to contribute to tangible change. Perhaps it was because she knew exactly why we were all there that her words had such poignancy. The tone was set, and throughout the day we were continually reminded of the agency of landscape.

Like Briggs, Walter Hood of Hood Design Studio based in Oakland, California, emphasized the importance of seeing himself in the city, in his case as an African American man. For Hood, this was about the importance of being free to make choices – about “voice and choice.” He asserted that we don’t know how to talk about race and gender in landscape architecture, and that there is a need to get rid of normative values. For Hood, design is about resistance, about being more than just a service industry. His project, Double Consciousness, a columnar sculpture to be erected at Princeton University that reflects on the complex legacy of former United States president Woodrow Wilson, was explicitly about accountability and calling people out. In his practice, Hood seeks to create fictitious landscapes that are also authentic, where people want to question where they are, why they’re there, and the role of government. In a similar vein, Sanitas Pradittasnee of Bangkok-based practice Sanitas Studio spoke of a mythical escapism, a space for the imagination, how we choose to see and not to see, and her desire to create spaces where people are encouraged to think and question. Brisbane practitioner Kevin O’Brien of BVN spoke of the idea of a longer trajectory of practice and the need for Indigenous voices to come through. This was the meta-narrative to his practice, and deeply located in culture.

In her presentation, Jocelyn Chiew from Monash University’s Buildings and Property division offered not just a description of practice, but an incitement to practice, from the client’s perspective. Refreshingly, she elucidated a career pathway that is less well defined and spoken of, attempting to break down what she described as professional isolation. Chiew encouraged us to consider the multivalent nature of landscape practice: the importance of processes of procurement and advocating for design; the enduring influence of strategic design-driven processes; and the importance of access to decision-makers and governance structures.

Australian public policy analyst and academic Roberta Ryan went beyond a description of the responsibilities and opportunities of practice, to the risks of professionalism as an ideological mechanism. In her talk, Ryan encouraged us to loosen the boundaries around our fields of expertise as a way to truly enact agency, rather than relying on professionalism’s structural status whichoften sustains existing power relations. Drawing on research from the University of Technology Sydney’s Institute for Public Policy and Governance, she emphasized the criticality of collecting evidence to help enable citizens to articulate the value of public space and place. She also spoke of the continued importance of landscape practitioners engaging with those whom our work is intended for.

Anna Chauvel of Place Laboratory spoke of some of these public engagement opportunities and methodologies, and of the development of place plans that emphasize not just visions but values. We may have given ground to placemakers, but Chauvel reminded us that landscape architects can lead that process. Henry Crothers’ Auckland practice Landlab exemplified how this might be done by putting greater emphasis on the ecological role of placemaking. Crothers talked through several strategies, from the playfulness of one of Landlab’s smallest budget projects that had a far-reaching impact to environmental partnerships and their researching, trialling and testing. He also touched on meaningful forms of engagement that work to reinforce both culture and ecology.

The final session ended with the promised lively debate, well facilitated by Cassandra Chilton, a principal at Melbourne-based Rush Wright Associates and a founding member of the feminist art collective Hotham Street Ladies. Chilton teased out a thread common to all of the day’s speakers – the ownership of both their practice and experience. How each speaker situated themselves within practice wasn’t concealed behind a veil of the third-person narrative of studio manifestos and publications. We, the landscape architecture profession, are a collaborative discipline – but this conference was a timely reminder of why it is important to know exactly when to distinguish between the “I” and the “we.”

The third annual Landscape Australia Conference was held at the NGV International’s Clemenger BBDO Auditorium, and the venue’s warmth and darkness lent itself to often intimate and frank discussion. This conference asked us to acknowledge, respect, and recognize; to decolonize and deconstruct; to understand the instrumentality of what we do, while drawing on our own spatial intelligence. A “landscape [practice] is a long road,” Helen Smith-Yeo of Singapore-based STX Landscape Architects emphasized. You need to “find for yourself, things that please you, that keep you going … and to enjoy what you do. Otherwise we might as well be selling donuts!” A measure of a successful conference was the feeling, upon leaving, that I hadn’t simply been presented to, but rather called on – and I had indeed found things to keep me going.

The 2019 Landscape Australia Conference was held on 11 May at the NGV International in Melbourne. 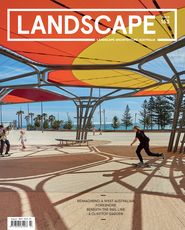 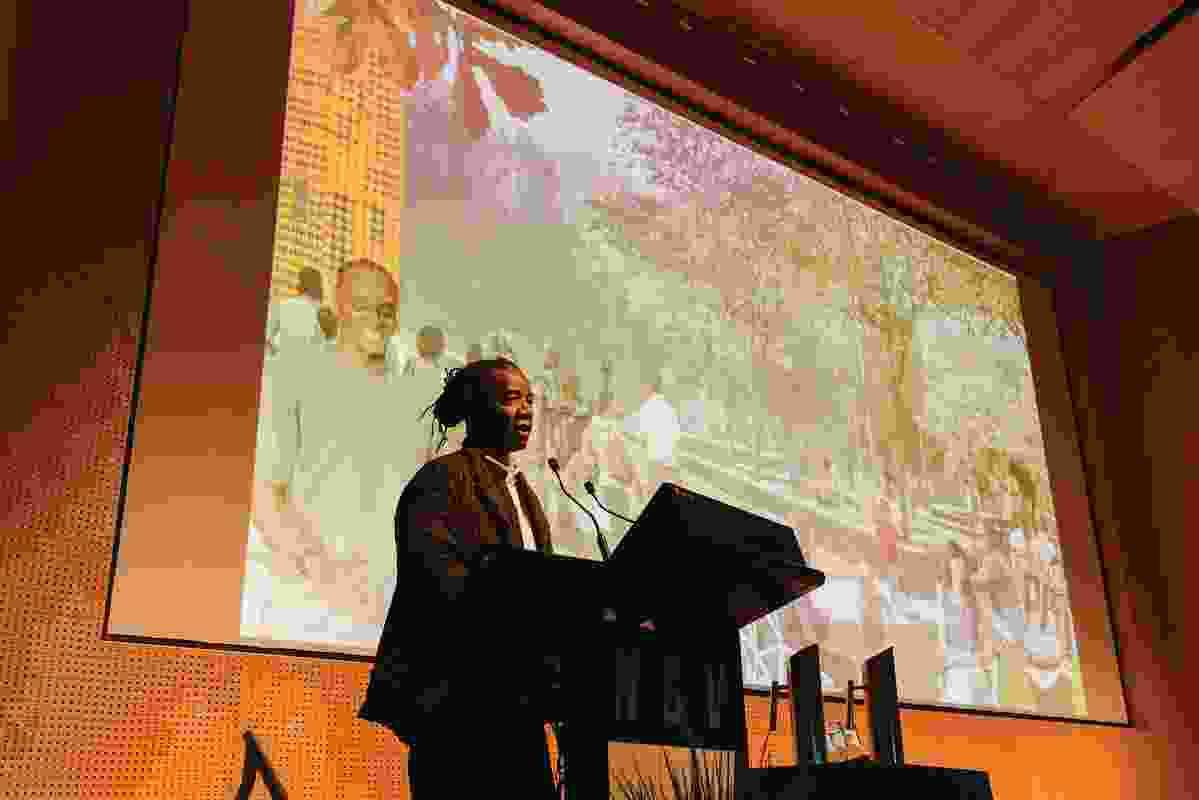 Walter Hood of US practice Hood Design Studio and the University of California, Berkeley, spoke about agency as the freedom to act. 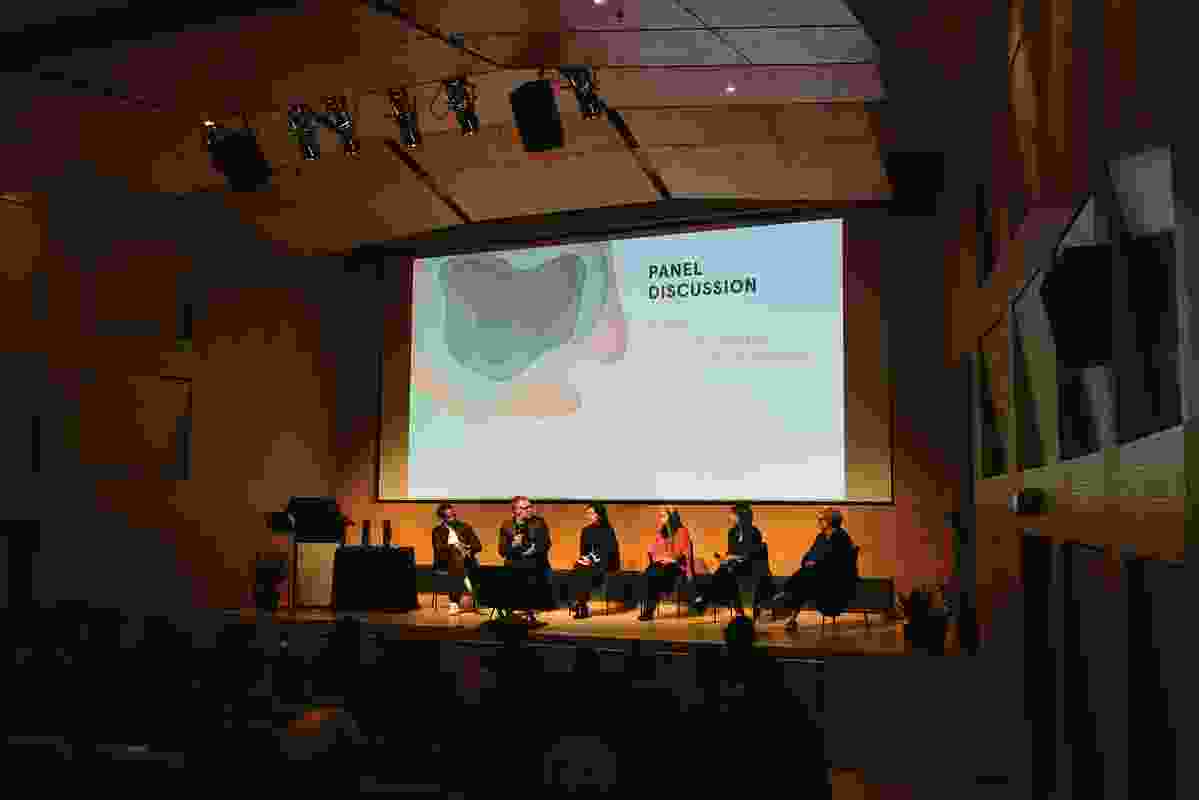 A provocative panel discussion traversed topics from the necessity of community engagement to landscape instrumentality. 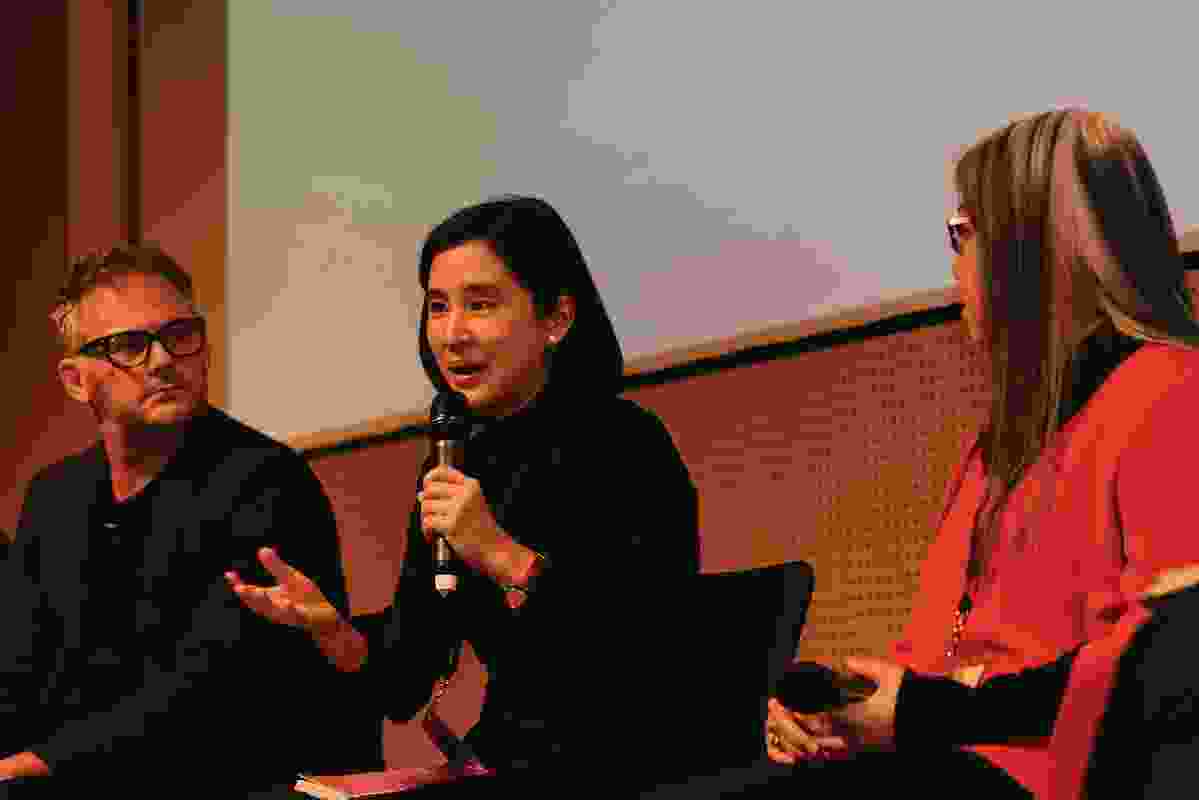 Sanitas Pradittassnee of Bangkok-based Sanitas Studio during the panel discussion. 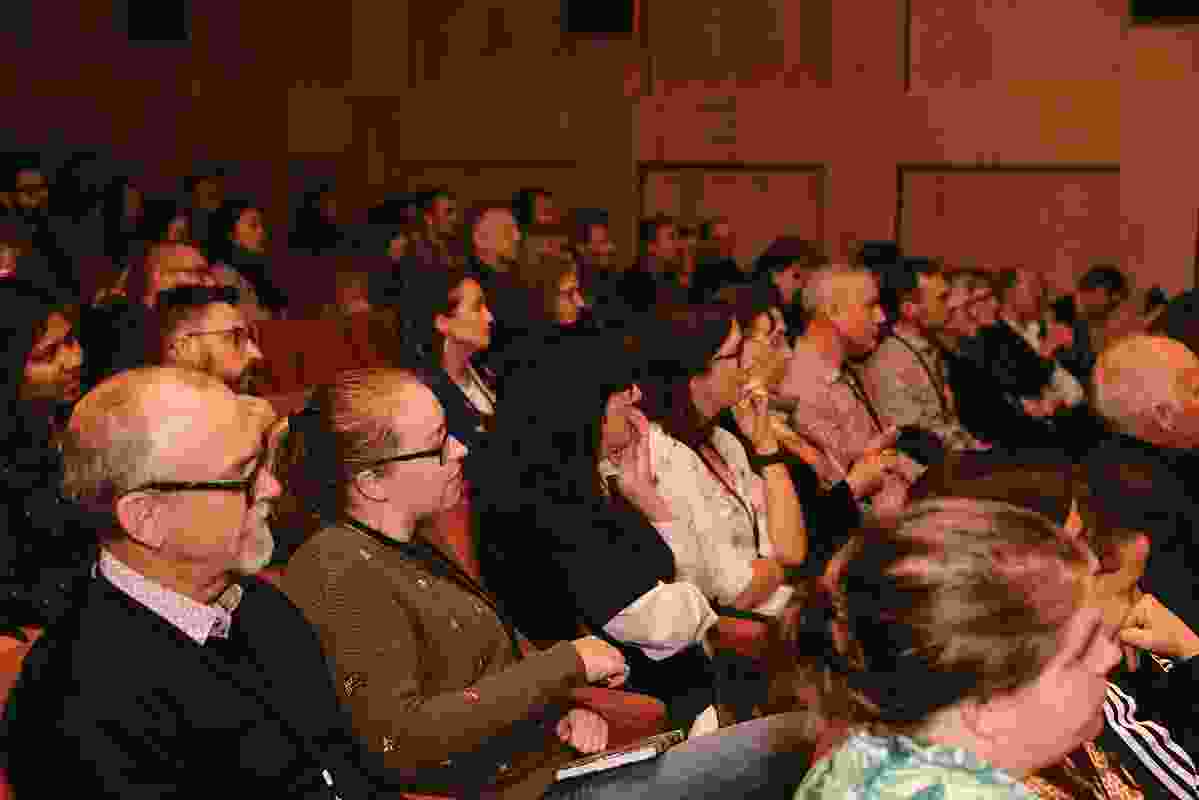