This Public Life: The 2015 Festival of Landscape Architecture

The inaugural Festival of Landscape Architecture in 2014 set an exciting new tone for the profession’s annual get-together. In 2015 I attended the second festival, This Public Life, amid much speculation as to whether it could be as richly satisfying as the first. The creative directors – Cameron Bruhn, Claire Martin and Ricky Ricardo – are to be congratulated for crafting something different, yet equally wonderful. Over eleven days, with more than thirty events and installations, the idea of a “festival” was realized to its full potential.

Opening the festival’s Research Summit at the University of Melbourne, Gini Lee set the intellectual frame for both the summit and the conference to follow, citing Alan Pert’s notion that the rigour we bring to our work is more important than distinctions between design and research. Indeed, the presentations that followed over the next three days largely evaded such distinctions. Student work was showcased, including in the This Public Space design competition, with the winning project, Aftershock by Alex Prujean, Katie Nguyen and Michael Cook from Victoria University of Wellington, designing post-disaster resilience into the Wellington landscape. I question the separation of summit and conference, as the mixing of student and professional work is invaluable in creating conversation among people at all stages of their landscape architectural development.

After the summit, the festival officially opened in the “backyard” of the NGV International. We shared drinks in the balmy evening, with a great deal of energy and optimism in the air.

The next morning saw conference participants enter the sweeping, glass atrium-style theatre at Deakin Edge, by the Yarra River, along a springy turf carpet. Mark Frisby and Malcolm Turnbull opened the conference. Yes: that Malcolm Turnbull. As a video presentation by the Prime Minister was played on an enormous screen, the theatre fell silent. Mr Turnbull was actually greeting us, the landscape architects of Australia, telling us that our contribution is valued and committing his new minister for Cities and the Built Environment to working with us. Here was an opening to grasp the professional recognition we spent so much of the 2014 festival collectively pining for.

The conference was a veritable chocolate box of outstanding international speakers presenting design/research, informed by an impressive intellectual rigour and some refreshingly earthy sensibilities. Many threads emerged in the summit, notably from Ana Abram and Maj Plemenitas’s argument that in the face of changing climate systems, designers should adopt the naturally occurring conditions of landscape change as tools and models for design. Stephen Perry similarly talked about digitally modelling the fractal self-similarity occurring in natural systems as a design tool, the principles of which conference keynote speakers Carmen Fiol-Costa and Andreu Arriola Madorell also applied across multiple scales of landscape forms. The underlying purpose of this work was the making of better landscapes to support human wellbeing. Natalie Jeremijenko took an exciting, new approach, proposing instead that design practice should be based on mutualism, giving equal priority to the wellbeing of the non-human. That is, all organisms within an ecosystem can benefit from a design input. She showered us with examples, including her wonderful strategies for creating “ooz” (zoo backwards), in which humans and animals share territory.

Issues of the civic naturally pervaded many of the presentations, and Jacky Bowring’s talk, titled “Getting Emotional: Landscapes of Sadness and Loss,” addressed this thread from a thought-provoking angle. She persuasively argued that rather than striving only to create places to make people happy, landscape architects should also facilitate the experiencing of emotions such as melancholy, sadness and loss. Mart í Franch Batllori similarly argued against a trend toward over-programming, proposing a quieter kind of design by subtraction. The delicate, sensitive projects he shared with us dealt with slow, deep time, and connections with the past that were both delightful and melancholy. His southern Catalonian salt garden, “in which the salt crystals are the flowers,” was based on an understanding of both the history and the mechanics of the site as working saltpans in the twelfth century. This project manifested Bowring’s “conditions for melancholy” in landscape: leavings, weathering and patina, intimate immensity.

Over eleven days, with more than thirty events and installations, the idea of a ‘festival’ was realized to its full potential.

Discussions ensued about love, longing and loss, with Cees van der Veeken asking, “Are we loving the natural world to death?” Contemplating these themes, I wondered: Are landscape architects at heart just environmental romantics? Do we long for the “nature” that we love, but feel we are losing? If only we could have asked the sparrows that periodically strolled into the venue to observe proceedings.

The conference was framed by the need “to better understand public life as an expression of our collective imagination.” The conference keynote speakers were mostly international, creating a (no doubt unintended) sense of Australians playing second fiddle. Public life and great design are not exclusively to be found overseas, and nor is the Australian collective imagination confined to our two largest cities. I hope the rest of us will put up our hands to share our contributions to the scope and richness of Australian public landscape life in 2016.

Natalie Jeremijenko’s final keynote speech circled us back to Abram and Plemenitas’s opening talk, stating that “landscape architects are the intellectual leaders of the twenty-first century,” as humanity’s biggest challenge is to redesign our relationships with natural systems. Our imaginations inspired, we closed with drinks in the Melbourne dusk. 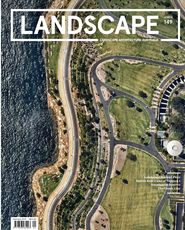 This Public Life: The 2015 Festival of Landscape Architecture 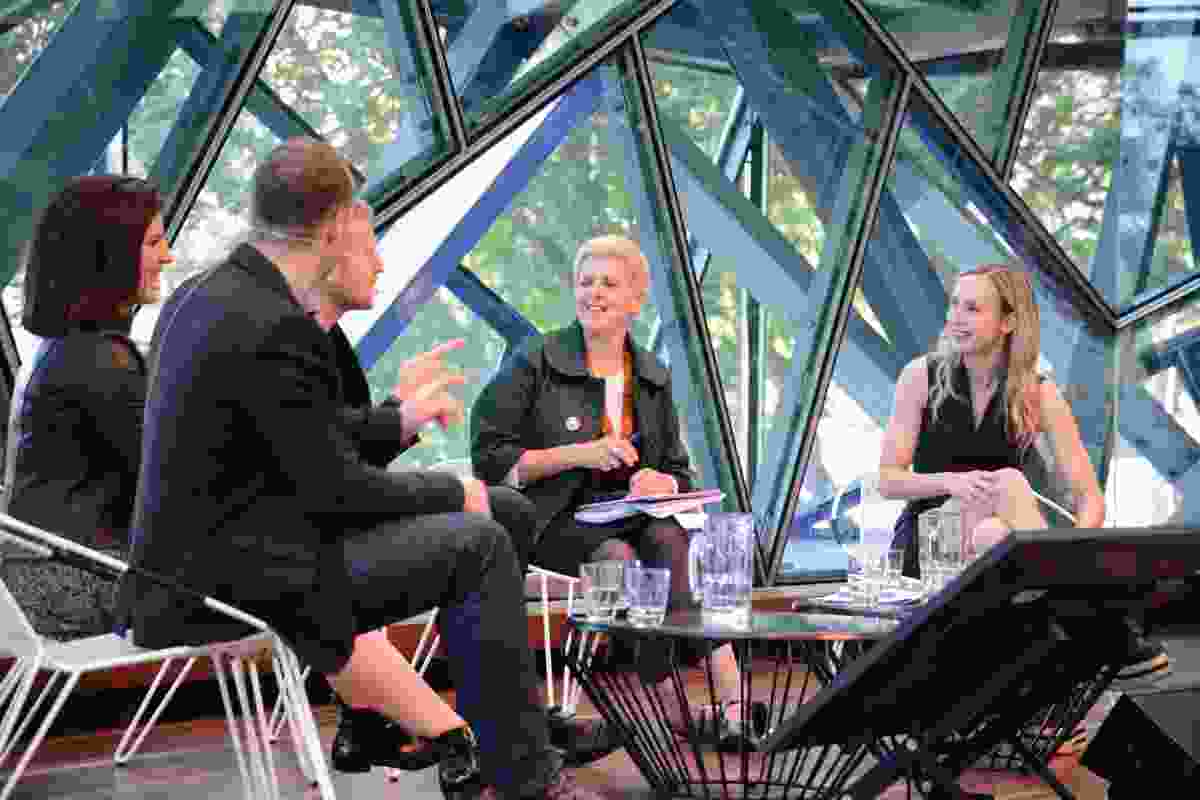 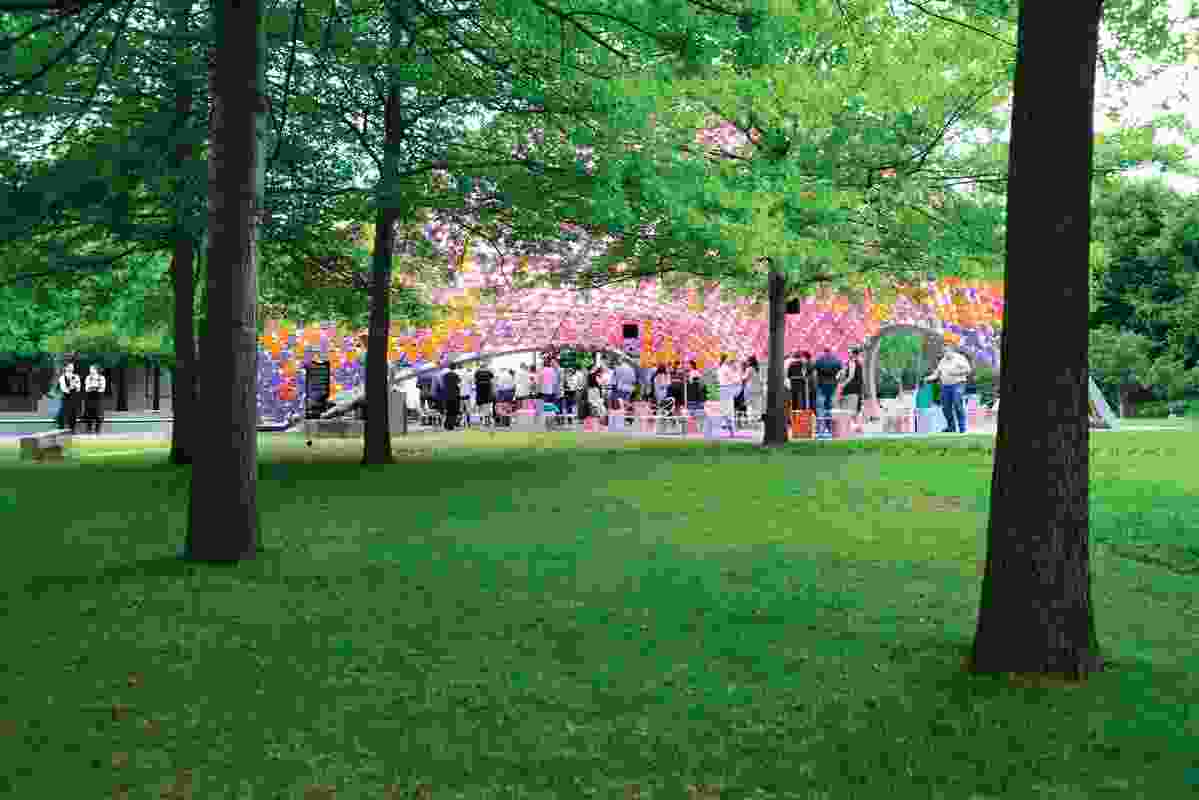 This Public Life festival was officially launched in the rear garden of the National Gallery of Victoria under the summer pavilion designed by John Wardle Architects. 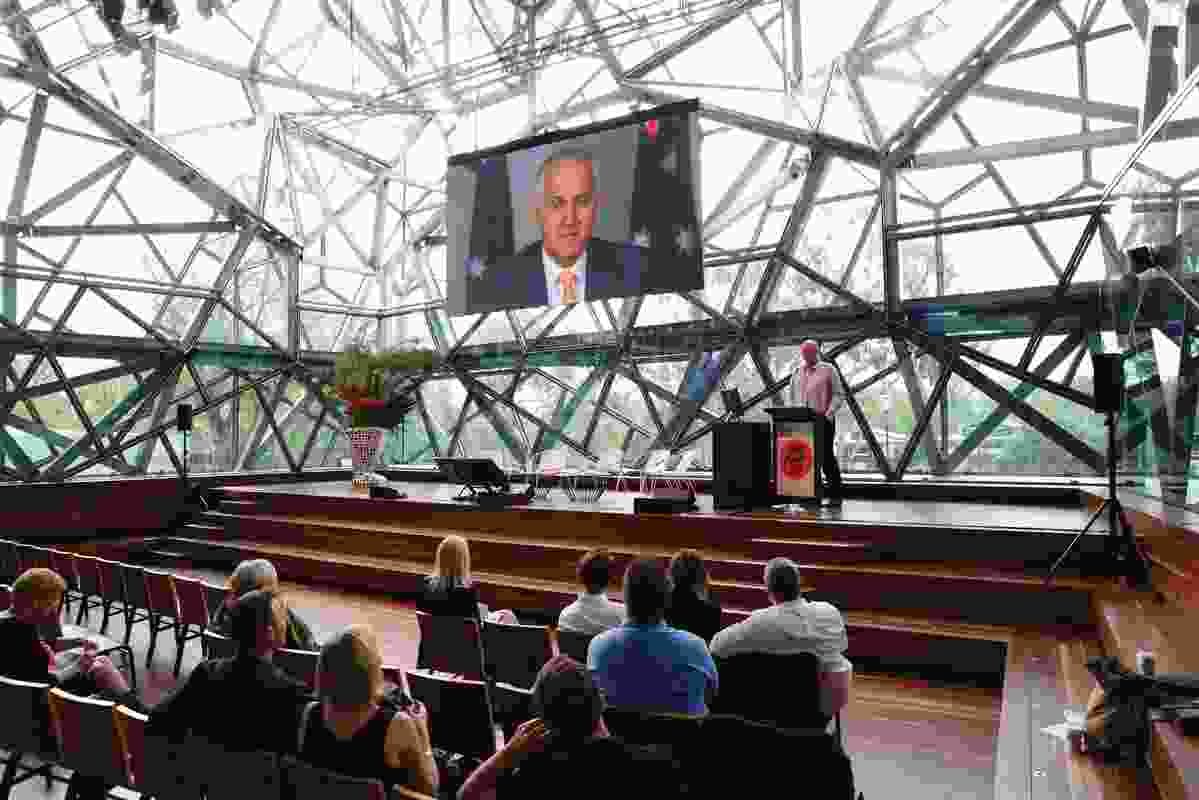 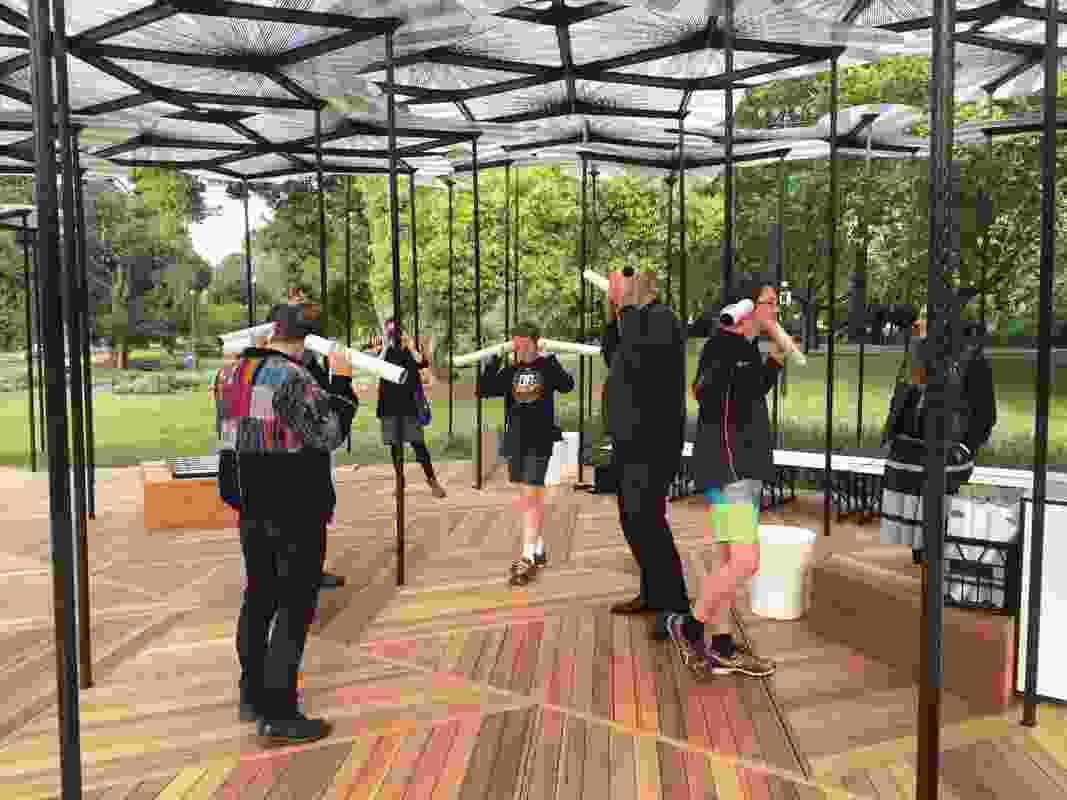 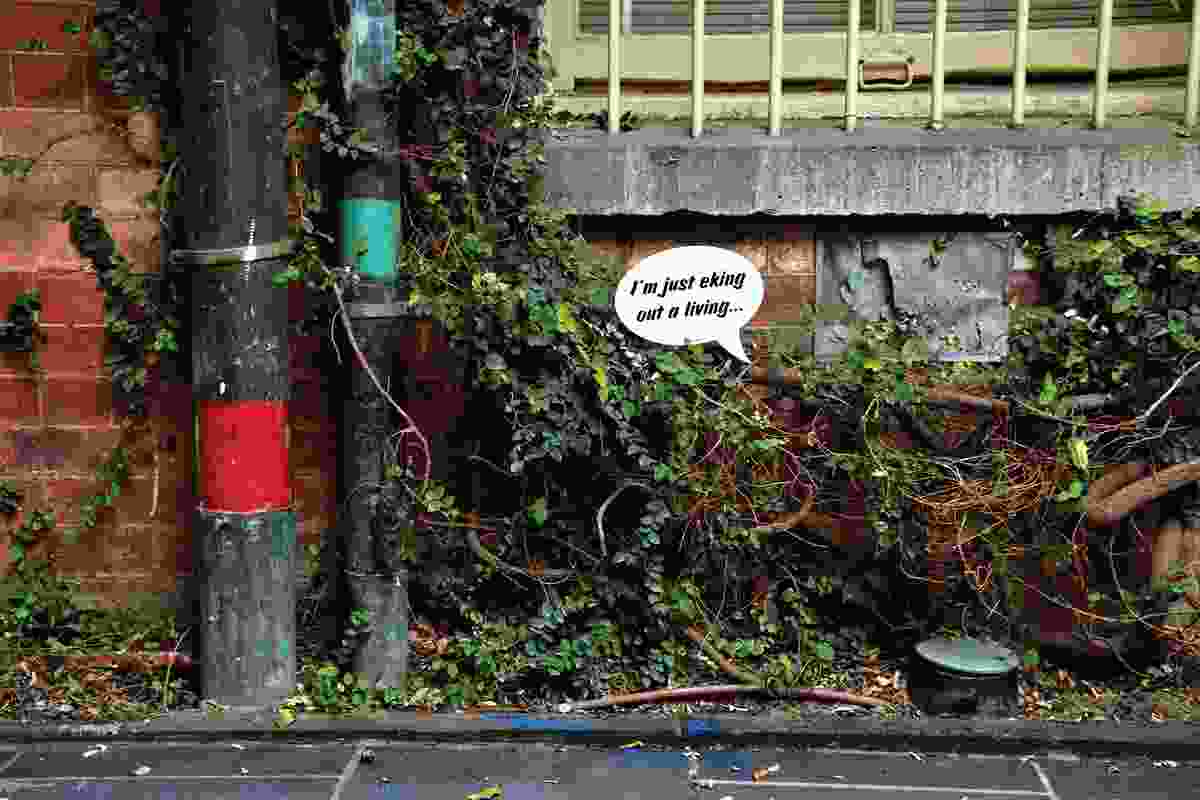 “The Plants Can Talk” by landscape architect Cassandra Chilton with Hassell created a fictional narrative around plant’s feelings and thoughts. 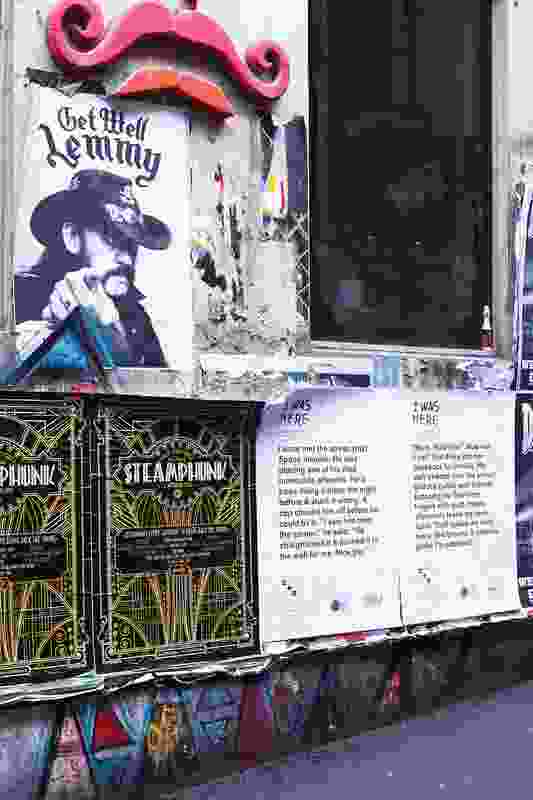 A multi-site work I Was Here by Chart Collective invited anonymous true stories set in Melbourne’s CBD and overlaid them through a series of posters.